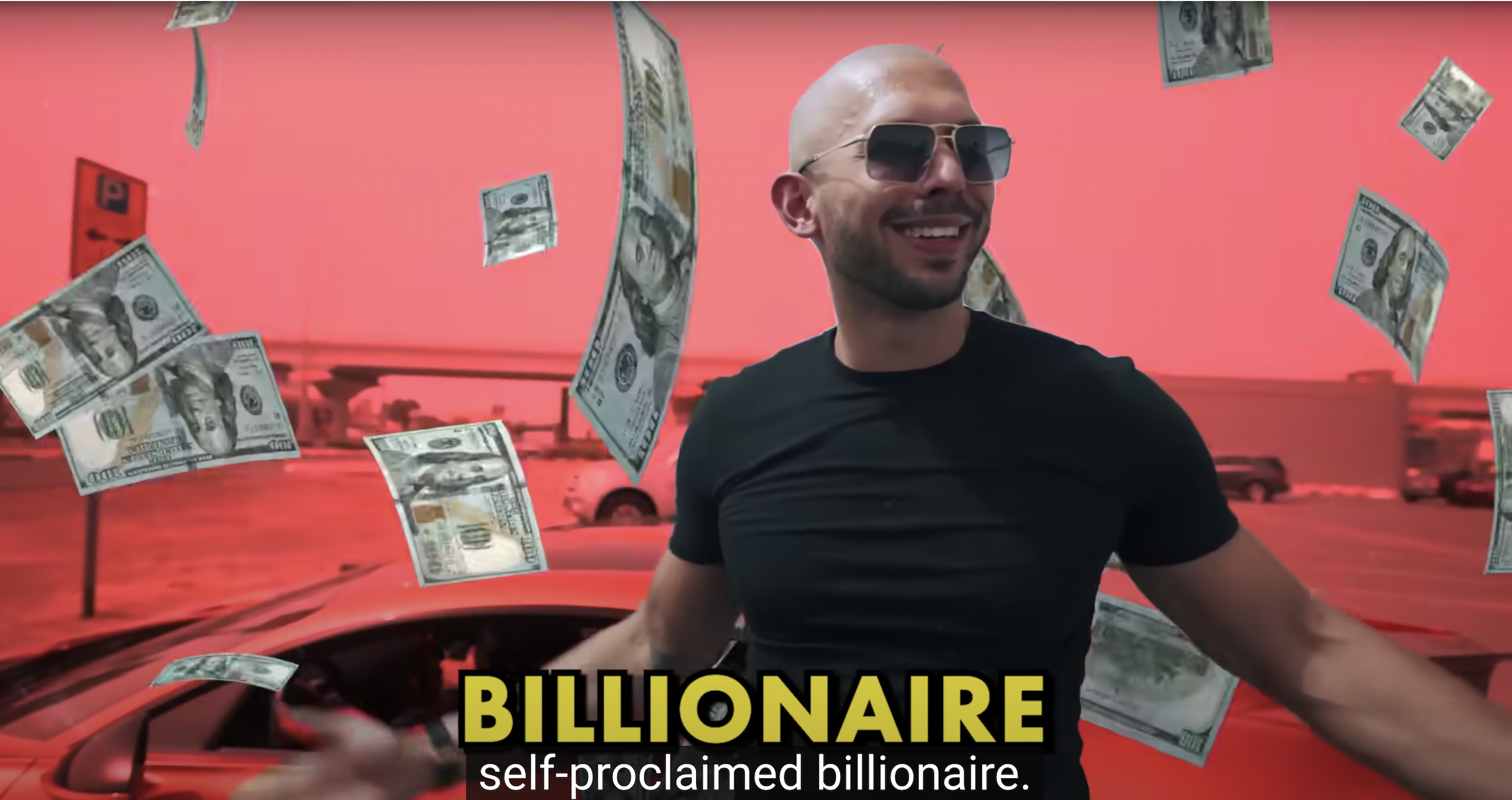 Not a communist: Andrew Tate.

The former kickboxing champion usually appears in his videos shirtless and puffing on a cigar, surrounded by beautiful women.

And just like Trump, Andrew Tate’s appeal is permissive and prohibitive.

The retired fighter’s message to frustrated young men can be summed up best by his slogan, “Fuck bitches, get money.”

He even set up a ‘university’ to provide courses on this subject (for just $49.99 a month).

As a fellow alpha male, Piers Morgan just had to invite Tate onto his talk show. He questioned him on his past comments and some of the shocking claims made against him.

Watching Piers Morgan Uncensored, you might mistake Andrew Tate for a reasonable person who has said some iffy things here and there. Morgan pushes him on several points and gives him plenty of time to explain away each claim.

TalkTV, the Murdoch-owned rival to GB News, was the perfect channel for Piers Morgan’s Tate interview.

Naturally, GB News organised its own interview with the influencer around the same time. Dan Wootton asked how he has been so successful despite supposedly being cancelled by the woke left.

Why was he cancelled? Andrew Tate is on the record making misogynistic comments. He has been under investigation over claims of sex trafficking, and now he was arrested as 2022 ended.

Tate was de-platformed from many social media channels in August 2022. But this created a Streisand effect where people who had never heard of him (including myself) looked up his name.

The US-born Romanian social media icon rapidly became the most Googled person in the world. I typed his name into Google Search after receiving several notifications from apps declaring he was banned from their platforms.

Most people might never have heard of Andrew Tate if it weren’t for this social media controversy.

Corporate censorship failed in the Tate case, as it so often does. His videos were still widely shared, and mainstream media recognition followed.

Even though the Romanian investigation into claims of sex trafficking goes back to April 2021, some British journalists could not resist covering it again.

And now we’re all talking about Tate.

When Tate clashed with Greta Thunberg before his arrest, TalkTV host Julia Hartley-Brewer waded in on the side of decency.

“I’d choose Andrew Tate’s life every single time over the life of a half-educated, autistic, doom-mongering eco-cultist. And the only car I own is a diesel Tiguan,” she tweeted.

Hartley-Brewer quickly deleted the tweet but backtracked following Andrew Tate’s arrest, and the discriminatory comment is up again.

The fact that Tate received more support than Greta Thunberg is a sign of the times.

I’d choose Andrew Tate’s life *every single time* over the life of a half-educated, doom-mongering eco-cultist. And the only car I own is a diesel Tiguan. 🤷🏻‍♀️ 1/2 https://t.co/yFD4L9Jflk

It wasn’t so long ago that Andrew Tate would have been an outcast, given the allegations against him.

Something has changed in our culture, but it wasn’t a sudden break from a halcyon past or the onetime Catholic’s conversion to Islam.

He’s more an anti-#metoo hero, a defender of the unapologetic accumulation of women and capital during a time of economic crisis.

This is how you survive Brexit. Or at least remain distracted from it.

Andrew Tate is not the first extreme rightist to be platformed in the mainstream British media. He may be the most outrageous figure in recent years, but he’s far from alone.

Provocateur Milo Yiannopoulos was given a great deal of publicity and airtime in the UK. BBC Radio 4 interviewed him, and so did Channel 4 News. He was the poster child for the so-called alt-right.

The UK media gave Yiannopoulos free rein to make his case because it would get views. The press deemed his remarks’ controversial’, and people debated whether he was right or wrong about issues X and Y.

The provocateur was legitimate, in other words.

It wasn’t until the American right turned on Milo Yiannopoulos for his comments about paedophilia, and that some children under the age of 13 are capable of giving sexual consent.

Yiannopoulos is now hawking gay conversion therapy and claims he has been cured of homosexuality.

News organisations may have inadvertently helped promote the reactionary to millions of people, while his own political allies killed his career.

Milo Yiannopoulos was cancelled by the right.

Another case was Jordan Peterson. Far from a marginal figure, Peterson has made a killing from his internet fame for his opposition to the C-16 amendment to the Canadian Human Rights Act.

The 2018 Channel 4 interview with the Canadian ‘philosopher’ became famous for its unfair line of questioning.

Peterson’s fans were soon sharing clips of the interview and slamming journalist Cathy Newman for not showing sufficient deference to the great man.

But the aggressive interview helped Jordan Peterson continue to claim he is fighting the good fight against the liberal media. It reinforced his narrative that the woke left is running the show.

Two years later, Peterson had to travel to Russia to undergo radical treatment to recover from his benzodiazepine addiction. His all-meat diet was not enough to save him from the perils of benzos, but an induced coma did the trick.

Nevertheless, Jordan Peterson has successfully monetised the anger of disillusioned young men. Canada’s best-known conservative makes $100,000 a month from his crusade against wokeness.

And we’re supposed to believe he is a free-speech martyr.

If we go back further, we find figures like Nick Griffin and Nigel Farage were platformed by the mainstream media and often criticised. However, this very process set a new standard for legitimate controversy.

On the one hand, Griffin was portrayed as the face of right-wing extremism.

On the other hand, the media treated him as if he might speak for a large constituency of working-class people.

While clever journalists routinely showed up Nick Griffin on talk shows, the BNP vote grew throughout the 2000s and reached its peak at the end of the decade.

Many of the BNP’s positions were mainstreamed by tabloids during this time.

This would turn out to be the height of the BNP’s success.

Griffin won a seat in the European Parliament, along with Andrew Brons. It should have been a turning point for the far-right party, but it soon imploded.

After the BNP imploded, UKIP absorbed the far-right vote and combined it with a broader electoral coalition.

Farage may have banned former BNP members from standing as UKIP candidates, but his party was a more effective vehicle for anti-migrant politics.

The BBC helped make Farage a household name even though Oxbridge-educated liberals staff the Corporation. A lot of liberals mistook Farage as the voice of the common man.

This trope is very misleading. He is the voice of some common men but also a representative of an opportunistic elite and a resentful middle class. Brexit wouldn’t have happened if it was just down to working-class voters.

Today, the British far-right is deeply fragmented, having no clear vehicle for political power.

The Conservative Party has turned itself into a middle-class protest party to outflank Farage.

We shouldn’t need Twitter to ban Andrew Tate to prevent him from spreading his politics. His message should have been anathema to most men, but it wasn’t.

Instead, Tate became a social media star and profited immensely from this.

What we lack is a strong cultural response to people like Tate.

The Swastika is technically legal in the UK, but it’s so taboo that even the far-right understands it cannot get away with promoting it. This is a tremendous cultural victory.

Likewise, the UK does not have a ban on Holocaust denial, but we do not have the problem of David Irving being treated as if he is a typical historian.

Irving will never be given a slot on the BBC, for example, and rightly so.

So we do have a culture of opposition to certain ideas and values. Why we don’t have this when it comes to the preachers of misogyny is a good question.

Brexit will turn three on the last day of January, over six years since the 2016 referendum kickstarted Britain’s race to the bottom. END_OF_DOCUMENT_TOKEN_TO_BE_REPLACED

Be careful what you wish for. It may be a cliché, but it’s one the Greens are learning all over again. END_OF_DOCUMENT_TOKEN_TO_BE_REPLACED 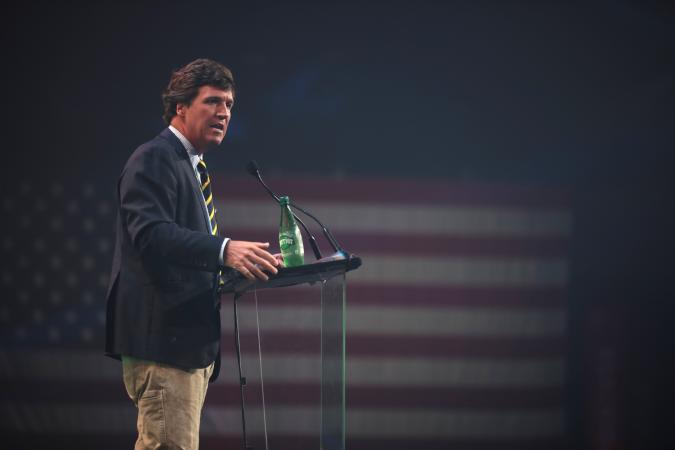 The gloves are off. Volodymyr Zelenskyy’s Washington trip outed the Antisemitism of the pro-Putin right. END_OF_DOCUMENT_TOKEN_TO_BE_REPLACED