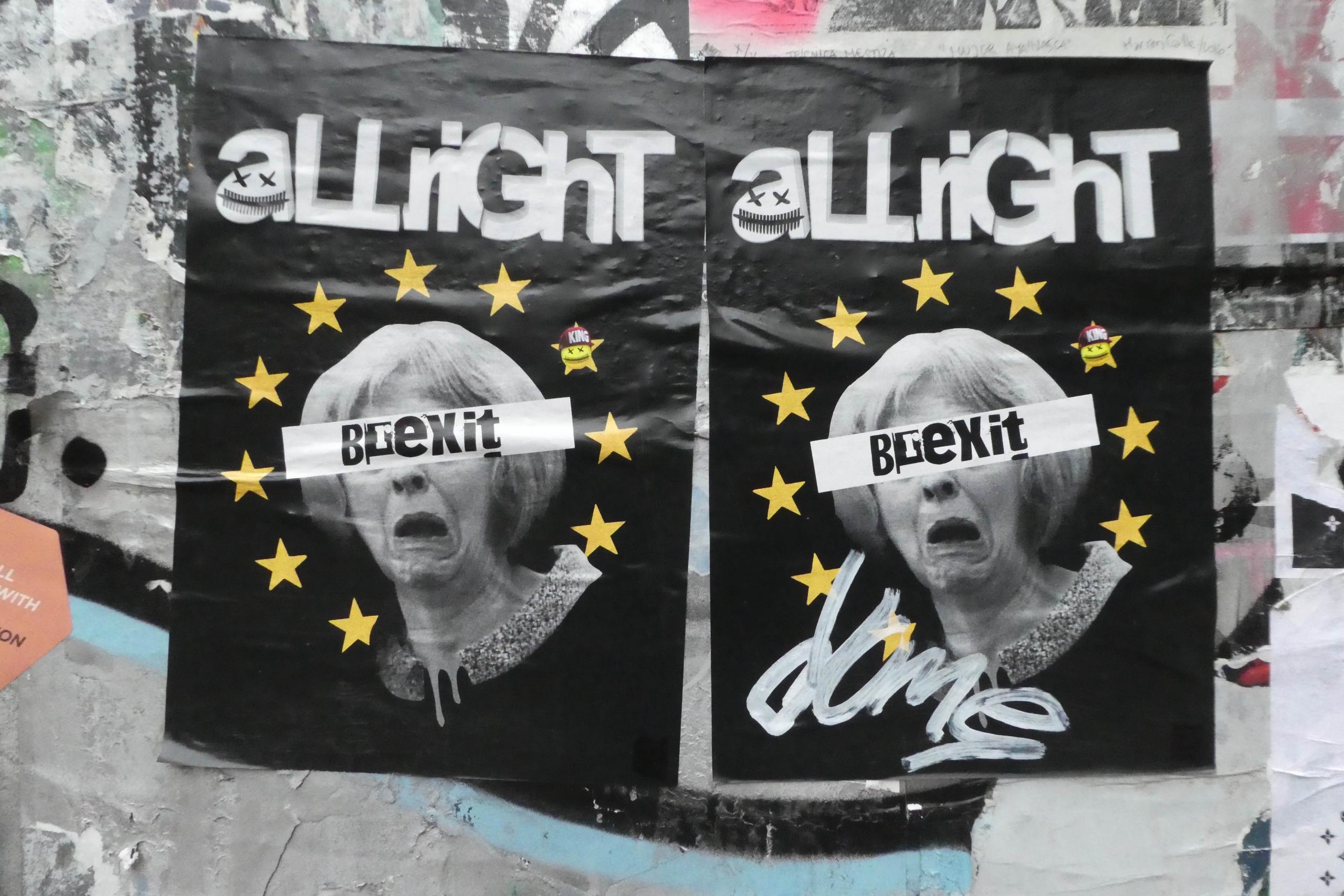 The most popular prime minister ever. London, December 2017.

The assassination of Jo Cox during the lead-up to the vote should have been a watershed moment. Instead, the referendum result gave a grotesque license to racist violence.

Even the snap general election pointed towards the enclosure of any alternatives. This did not last long, fortunately.

Labour’s gains in June 2017 almost immediately ended that claustrophobia. Theresa May’s government was still in place but weakened in parliament. A space for left social democracy, and indeed a left-wing Brexit — “Lexit” — was seemingly possible.

While there is no substantial majority in parliament or the country for any outcome, the uneasy dissonance between left celebration and the centrist Remain camp’s depression threatens to unravel the Labour coalition.

It shows the potential pitfalls Labour faces in its continued stance of “constructive ambiguity” around leaving the European Union.

The leadership has only just moved away from this stance to wage its claim to anti-Brexit terrain.

The meaning of #FBPE

Brian Eno once said that Velvet Underground only sold 10,000 records, but every person who bought one went on to form a band. There is a familiar pattern of diehard Remainers starting pro-EU Twitter hashtags and centrist parties.

It is easy for left-wingers to be distracted by those with #FBPE — Follow Back Pro Europe — in their Twitter names, in part because passionate pro Europeans like former spin doctor Alistair Campbell are a media phenomenon.

But there is also some satisfaction at once dominant centrist political figures succumbing to the worst tendencies of the far-left. Remainers calling for a second referendum without a plan are like Trotskyist parties who endlessly demand a general strike.

While Caroline Lucas and Mike Galsworthy think carefully about building consent for our eventual relationship with the EU, others organise marches and confuse moral fervour with strategic nous.

Part of the problem is that while the Leave campaign had put next to no planning into their win, Remain had nothing like a plan for their loss. There is more sniping at Labour MPs who have consistently voted to mitigate Mrs May’s Brexit than Tory Remainers who have endorsed it. Notably, the organisation Our Future Our Choice thanked Tory MPs for promising to vote for an amendment which they subsequently failed to, while simultaneously condemning Diane Abbott, a pro-immigration Europhile who did vote for the same amendment.

The betrayal narrative that has emerged among the Remain campaign blames the Labour Party for Leave’s win. There are continuous rhetorical complaints — “Why aren’t Labour 20% ahead in the polls?” — never considering it might be for the same reason Remain are not 20% ahead.

Yet the real problem was Remain’s failure to analyse the political economy of both the UK and the EU — and what it would take to reform either. This was the case during the referendum, and it’s still the problem today.

What kind of Remain?

There was an alternative position on the EU that went much further than the centrist campaign. It was driven by a positive vision of what Europe could be and why Britain should be a part of it.

Jeremy Corbyn was one of the few politicians who could have convincingly made a sceptical “Remain and Reform” argument — sceptical of both Hayekian federalism but also wary of the revanchist project to Leave. His critics claimed this was not good enough and did more harm than good, but not even the most uncritical EU campaigners could win over all their supporters to Remain.

This indicates something deeper was going on in the country. For one, the barrier was always that the Tories were as equally committed to a project of austerity in the UK as the Eurogroup leaders and the European Central Bank were in the EU. People sensed fundamental change was not forthcoming.

While one of the Tories’ sister parties is headed by Turkish President Recep Tayyip Erdoğan and one of German Chancellor Angela Merkel’s European People’s Party comrades is Viktor Orbán, there are limited opportunities for change in Europe amenable to the left.

Indeed the most worrying pan-European project is a far-right one led by Orbán and Italian Deputy Prime Minister Matteo Salvini, calling for a Warsaw-Rome axis.

Orbán and Salvini have their own “Remain and Reform” agenda, namely creating a hostile environment for non-white and non-Christian Europeans across the continent.

French President Emmanuel Macron published his agenda for EU reforms this week in European newspapers. Though some of his proposals have obvious appeal, his leadership has been badly damaged by the Gilets Jaunes uprising, which has convulsed France since December 2018.

The EU is just one part of the story of institutional atrophy since 2008; it includes the banks, the fading hegemony of mainstream newspapers, and, if Scotland and Northern Ireland depart, perhaps even the UK itself.

“London subsidises the rest of the country”

The other problem for Remain is domestic. The social-democratic promise of stable growth in Europe to finance domestic benefits was no longer deliverable after 2008.

The subsidies argument, in particular, represents a major fault line for Remain — but also for a future Labour industrial investment strategy.

Many commentators were incredulous and mocked areas like Cornwall or Gateshead that received EU subsidies but voted heavily to Leave. Whilst little was known about the extent of EU subsidies up and down the country, funding for the Eden project or the Baltic Centre could not transform former mining villages and steel towns left to sink into drug-filled despair.

Areas like Cornwall or Barnsley already combine above average GCSE and A-Level results with chronic low pay. Subsidies are not the same thing as wealth, nor do they remove the underlying problems of low pay and job insecurity.

The idea that these areas “voted to make themselves poorer” is arguably the weakest Remain line. While the North East and the Midlands will be the worst-hit regions if we leave, this does not mean membership benefits these regions the most.

Countries often vote to make themselves poorer. From German reunification to austerity in the UK, the advocates of these projects have been candid that there would be financial sacrifices.

While Remain appealed to a base materialism in London and other major cities, Leave exploited the geographic antagonisms of England and Wales. It’s not simply that it appealed as a protest vote in poorer areas. But it would have been surprising if South Yorkshire had voted to Remain given its economy has collapsed almost as fast as Greece since 2008.

It would have been surprising if the North, which has missed out on £63bn in rail investment in the last decade, had voted Remain. As Tom Hazeldine has observed, this resembles the patterns of developing countries or economies transitioning from communism. The deliberate divestment in these areas, from the Beeching railway line cuts to the mine closures, was a means of subsidising London — not the other way around.

Or as the most prominent Leaver, and former London Mayor, once put it: “A pound spent in Croydon is of far more value to the country than a pound spent in Strathclyde.”

Leave’s success was in large part because they made an explicitly political argument. “Let’s give £350m a week to the NHS” worked not because of the specific number, but the false framing of NHS underfunding versus EU membership.

“Take Back Control” may conjure images of neo-imperialist and mercantilist fantasies, but the fundamental message was clear: “Leaving the EU can change your life.” Austerity, after all, is a political choice.

The Remain camp’s message was a conservative one which responded with “It can’t be done.”

It was not simply apolitical, but consciously de-politicised — like Rancière’s idea of “governing without politics”. It combined a lack of criticism of the institutions with a vapid instrumentalism, concerned with maintaining the UK as a global power. It conveyed a very English, egotistical form of love for the EU, not one rooted in concepts of solidarity and sharing power — mirroring the worst sins of Leave.

While Remain’s message was that politics is divisive, Leave claimed politics, and governing itself, is the solution to all our ills.

Lexit pursued by a bear

Since the referendum, there has been a debate about whether a hard-right Brexit could be reclaimed as an internationalist, left-wing Brexit. With 40% of voters coalescing around Tory and Labour blocs, could Lexit open up new political space? Or does polarisation inhibit this?

The Lexit argument is that the EU is not the same as Europe, and must be open to internal and external contestation. It is just one of many European institutions formalising and distributing shared power away from the old nation-state.

But unfortunately, the Lexit argument is, as with all political factions in the UK, constrained by delusions of imperial grandeur and the state of British power today.

While Lexit attempts to navigate the constraints of Remain technocracy, it too easily lapses into the worst FBPE tendencies. It often appears both posturing yet unambitious.

Not every media organisation can bear criticism, even self-criticism, but others require it to keep going. END_OF_DOCUMENT_TOKEN_TO_BE_REPLACED

Foucault once suggested that Clausewitz’s famous observation, “war is not merely a political act but a real political instrument” carried out by other means, be reversed, with politics made an extension of war. END_OF_DOCUMENT_TOKEN_TO_BE_REPLACED

Brexit will turn three on the last day of January, over six years since the 2016 referendum kickstarted Britain’s race to the bottom. END_OF_DOCUMENT_TOKEN_TO_BE_REPLACED