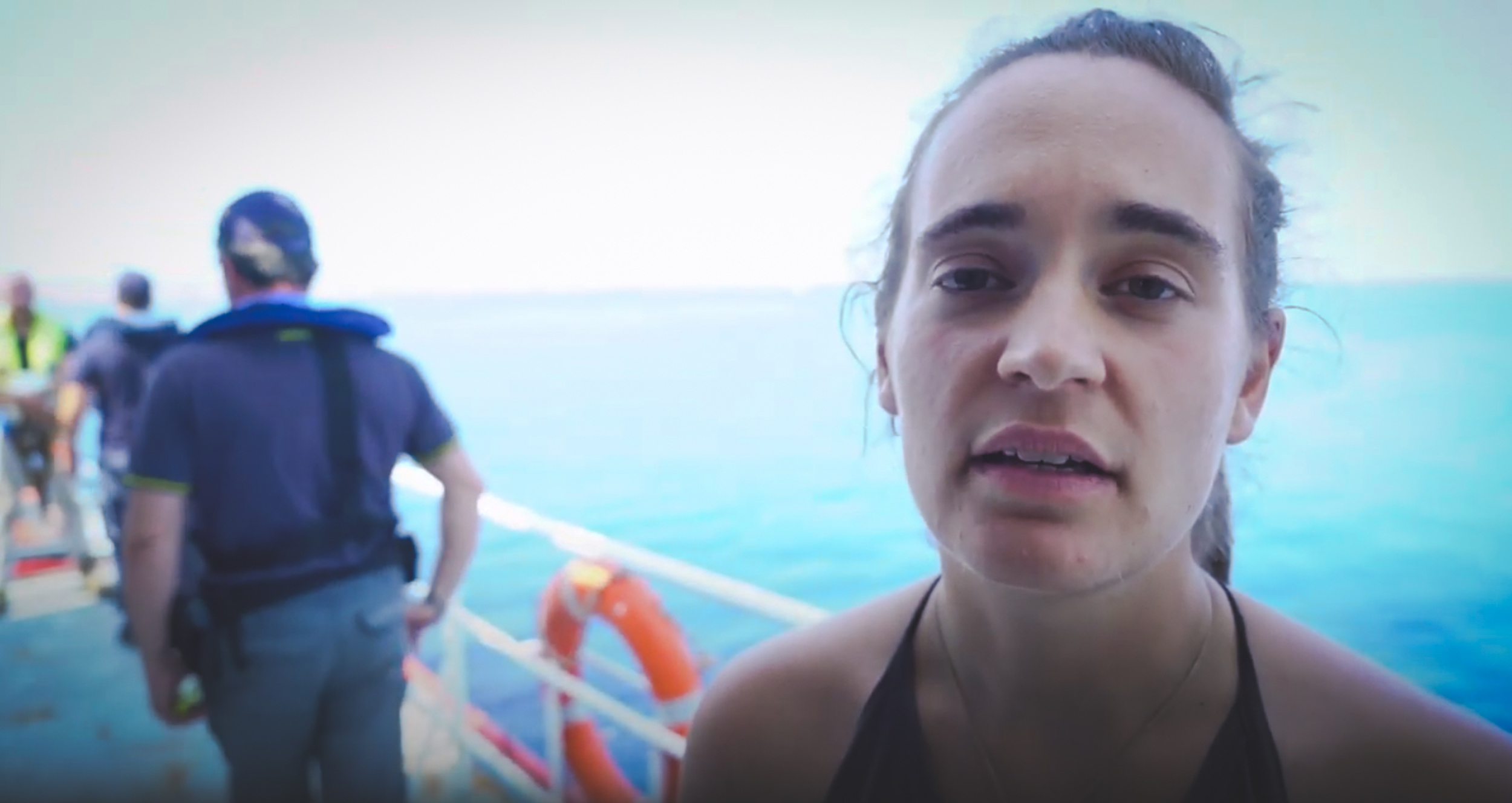 One a German skipper, the other a home-grown magistrate (GIP) they have each had a role to play in reining in, perhaps only temporarily, Matteo Salvini’s ultranationalist anti-migrant directives.

First up, the 31-year old sea captain of NGO rescue ship, the Sea-Watch 3.

In flagrant opposition to Salvini’s most recent decree, designed to stop humanitarian rescue boats from docking in Italian ports, Carola Rackete, formerly captain of an Arctic ice-breaker, steered her vessel into Lampedusa’s harbour.

While doing so she nudged an Italian patrol vessel, trapping it for a short time between the boat and the dock.

The Lega chief went into disinformation mode, disparaging Rackete as a “pirate” “an outlaw” and “a people smuggler” who had engaged in “an act of war”.

Upon reaching port, the 42 migrants were allowed to disembark and Rackete was arrested.

Donning his interior minister’s hat, Matteo Salvini declared that he expected “justice to deliver tough penalties to those who risked the life of Italian military personnel and who have repeatedly rejected our laws”.

To the media and later before the court, Rackete apologised for accidentally hitting the patrol vessel.

But she made no apology for entering the port in order to save the lives of the 42 African migrants aboard who, after being rescued on 12 June, had been stranded at sea for weeks awaiting permission to enter any nearby European port.

With conditions on the Sea-Watch deteriorating, despondent migrants threatening suicide and food-stocks running low, by 27 June, Rackete had no choice but to dock at the nearest available port.

Authorities had allowed thirteen migrants in need of medical attention to be evacuated from the ship just days before.

According to Sea-Watch spokesperson Giorgina Linardi, “For 17 days [Rackete] received no support at all by any authority, and the only indication that she got was to disembark the people in Libya, a country at war and the very same country from where the people that we rescued were where escaping. Carola did also not expect that level of resistance by the authorities.”

The obligations and rights of a sea captain to act as Rackete did are based in large part on a series of UN Charters which form the basis of what is known as the Law of the Sea but also, as Judge Vella pointed out, on rights and obligations which are enshrined in Italian domestic law.

In her judgement, Vella refused to validate the arrest warrant as she did not consider Rackete’s actions criminal and released her from custody.

Salvini had alleged that Rackete attacked a “warship”.

Judge Vella set out the law for him, pointing out that art 110 of the naval code stipulates that Guardia di Finanzia naval units are considered warships only “when operating outside territorial waters or in foreign ports where there is no consular authority.”

As the Guardia vessel was in territorial waters, it was not operating as a warship.

As the prosecuting counsel recognised, the duty to rescue castaways is also part of Italian law (art. 51 Criminal Code) and “covers not only the phase of taking aboard shipwrecked persons but also the subsequent phase of their operation to take them to a safe harbour”.

The judge’s order specified that “the obligations imposed on the captain can neither fail to materialise as a result of the ministerial directives on “closed ports”, nor as a consequence of the entry ban adopted on 15 June against Sea-Watch 3” as both the directive and the entry ban are lower in the legal hierarchical criterion than the ordinary and supranational laws with which they were in conflict.

Stated plainly, Matteo Salvini’s directive and the order to remain outside the Italian ports were eclipsed by the captain’s obligations and rights to protect life which are found in both Italian domestic and international law.

The obligation most frequently cited in regard to migrant rescues is “to provide assistance to persons in distress at sea.” This is expressly stated to be the responsibility of the “shipmaster”.

“Humanitarian Obligations” include ensuring that survivors of distress incidents are provided assistance regardless of nationality or status or the circumstances in which they are found and expressly states that “survivors, regardless of nationality or status, including undocumented migrants, asylum seekers and refugees, and stowaways, are treated, while on board in the manner prescribed in the relevant international agreements and long-standing humanitarian maritime traditions.”

As to the assertion of anti-migrant campaigners that rescued migrants should be returned to the places from which they departed, such an action would also contravene the law of the sea as there is also an obligation to transport those rescued to a “place of safety” which is defined as, “a place where survivors safety of life is no longer threatened and where their basic human needs (food, shelter, medical) can be met”.

It is furthermore expressly stated, “a ship should not be subject to undue delay, financial burden or other related difficulties after assisting persons at sea” which would seem to undermine Salvini’s threat to permanently impound the Sea-Watch 3.

Governments, in turn, under the Law of the Sea, have an obligation to establish and maintain search and rescue centres.

It is should be noted as an indication of the level of personal risk she took that if Rackete had been convicted of all counts she could have been sentenced to up to 22 years in prison.

After the judge’s decision, Italy’s deputy premier is showing no sign of backing down against either the judge or the captain.

In the case of the judge, he got personal, declaring Vella to be politically motivated, and despite her reasoned decision, unwilling to follow the law.

As a parting shot, Matteo Salvini said she “should run for office if she wanted to be in politics”.

Salvini also vowed to take any unilateral action he could against Rackete, declaring that he would expel her from the country once she was released from custody.

Rackete may still be charged with assisting illegal immigration. If she is prosecuted and found guilty, Salvini will be somewhat vindicated, as his attempt to muddy the waters between the work carried out by rescue NGO’s and the actions of profiteer human smugglers will have succeeded.

For now, the migrants remain at an Italian reception centre. Five European countries have offered to take them and the expectation is that they will be divided among them.

This is in line with the changes to the Dublin Regulations sought by Salvini and others.

The Dublin Regulations previously stipulated that migrants seeking the right to remain in the EU should have their claims assessed in the first EU country they enter.

This was to prevent “asylum shopping” but it has been successfully argued that this placed a greater burden on Italy, Spain and Greece, the countries with coastlines closest to the migrants’ places of departure.

The regulations were partially suspended during the 2015 migrant crisis when various countries, principally Germany and Sweden offered to take large numbers of refugees without regard to which EU country they first entered.

What seems likely to the point of certainty is that another Sea-Watch 3 stand-off will occur, and soon.

Despite scathing rebukes of his behaviour from German and French officials, the EU is unlikely to reform its regime for the distribution of migrants before another ship laden with rescued persons needs to enter Italian waters to save lives.

Right now a Spanish NGO rescue ship is operating off the coast of Libya where migrants are set adrift almost daily in boats that are little more than floating death traps.

If they are lucky an NGO boat will rescue them in time. If not they will be pushed back or captured by Libyan patrols or drown in the sea.

This week the actions of Captain Rackete and Judge Vella affirmed their legal right to be rescued. Just like any other human in peril on the sea.

Foucault once suggested that Clausewitz’s famous observation, “war is not merely a political act but a real political instrument” carried out by other means, be reversed, with politics made an extension of war. END_OF_DOCUMENT_TOKEN_TO_BE_REPLACED

Brexit will turn three on the last day of January, over six years since the 2016 referendum kickstarted Britain’s race to the bottom. END_OF_DOCUMENT_TOKEN_TO_BE_REPLACED

Be careful what you wish for. It may be a cliché, but it’s one the Greens are learning all over again. END_OF_DOCUMENT_TOKEN_TO_BE_REPLACED