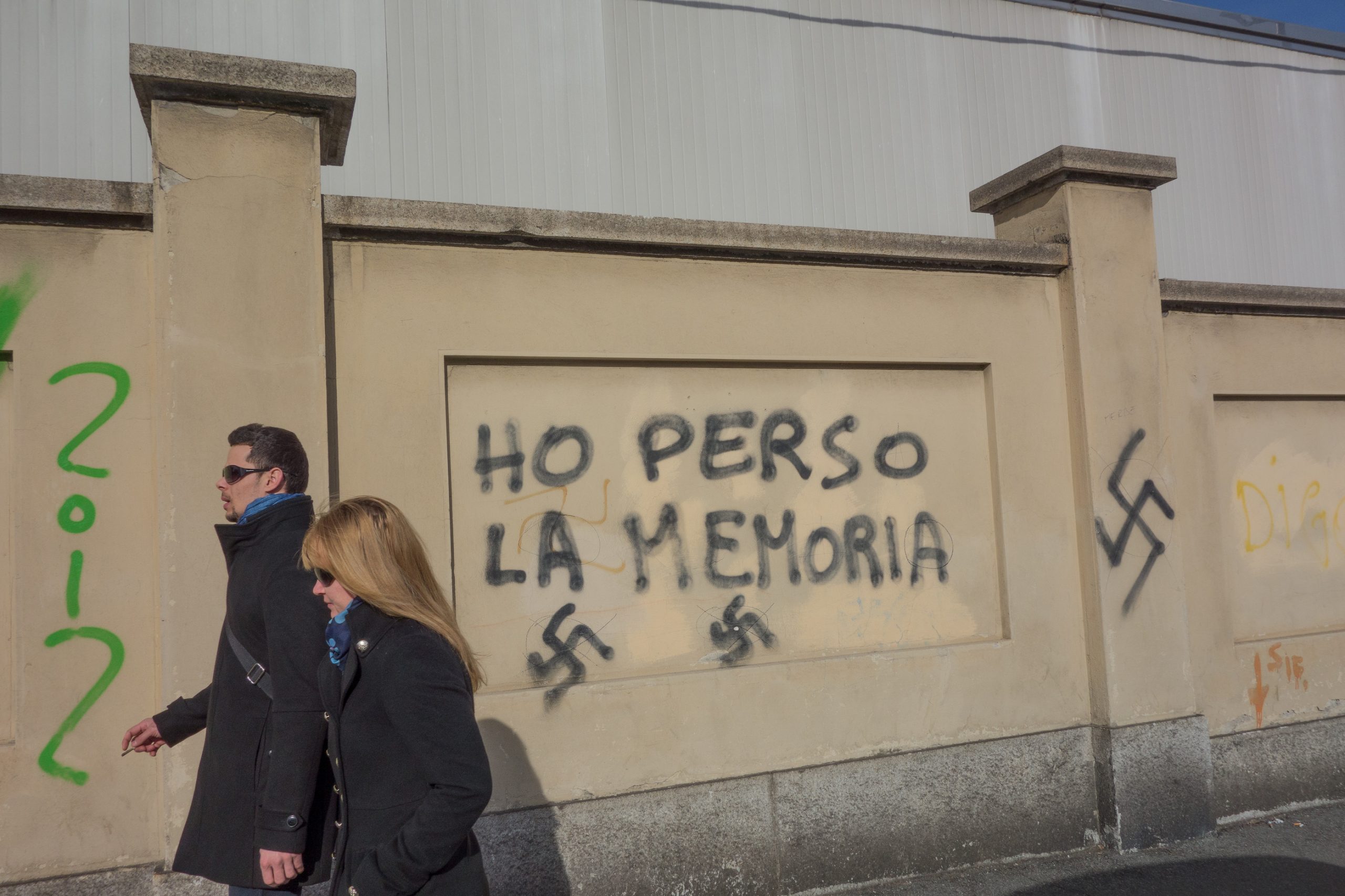 In Strange Hate: Antisemitism, Racism, and the Limits of Diversity, British sociologist Keith Kahn-Harris parses Antisemitism in its various guises and modes.

Strange Hate brings much-needed clarity to the discussion of the varieties of the Antisemitism and the ways that they manifest on borders between racism and anti-racism, although at times it seems that there are questions to which the answer is that there is no good answer.

Kahn-Harris takes as his project working through varieties of Antisemitism that manifest on the left. This is a particularly charged issue, both in general and immediate political terms.

The charge of Antisemitism is one that carries a great deal of symbolic and discursive power, at least for the vast majority of people across the political spectrum who do not simply positively espouse hatred of Jews and Judaism.

For the bulk of people in European and North American society, Antisemitism is like evil (and is in some respects synonymous with it).

Aside from Bond villains and most serial killers, almost nobody thinks that they themselves are evil, and actual, self-identifying Antisemites are correspondingly rare.

This is especially the case on the left where the opposition to racism is taken to be one of the defining features of the entire political outlook.

And yet it arises on the left. Kahn-Harris cites as one of his points of motivation in writing this book the controversy swirling around the British Labour leader Jeremy Corbyn and the larger question of Antisemitism in the Labour Party.

Many in Labour, especially in its more leftward segments, view both issues as created by the right-wing of the party as a way of embarrassing Mr Corbyn.

The question of Antisemitism on the left has a long provenance, as Enzo Traverso showed in his now-classic study from 1990, The Marxists and the Jewish Question: The History of a Debate, 1843-1943. This, in a sense, illustrates the gap between ideals and practice, since even the supposedly antiracist universalism of the left did not immunise it from the influence of the racist beliefs with which 19th and early 20th century European society was so thoroughly leavened.

Indeed, it is arguable that universalism itself was implicit in Antisemitism. As Hegel once wrote, to be something, in general, is to be nothing in particular.

The demand that people strip away all of their parochial and identitarian concerns in favour of embracing humanity, in general, involves the extinction of those particularities.

Thus, the demand from some on the left (and elsewhere) that Jews become Europeans, or proletarians, or simply human beings implicitly involves the elimination of Jewishness.

An even clearer and more pernicious version of left Antisemitism can be seen in the actions of some factions of the left in Germany in the 1960s.

Historical research has clarified, in case anyone had not recognized already, that the elimination of the National Socialist regime in 1945 did not also result in the extirpation of Antisemitism in Germany. Nor did the rise of notionally universalist communism on the other side of the Cold War divide have this effect.

Although West Germany paid large sums in reparations to Israel from the 1950s onward, populist Antisemitism was still widespread at both street level and in the corridors of government.

East Germany, by contrast, paid no reparations whatsoever, arguing both that communists had also been victims of National Socialism and that they were not obligated to give money to capitalists in Israel (with a certain degree of bleed over between anti-capitalist rhetoric and the trope of the specifically Jewish capitalist).

The generation that came of age in the 1960s was generally more critical of the Nazi past, and it is no coincidence that this period saw a new round of legal proceedings against Nazi perpetrators, most prominently the trial of 22 former camp functionaries from Auschwitz held in Frankfurt from 1963 to 1965.

Still, the increased consciousness about the Nazi past did not forestall the influence of Antisemitic beliefs. Kahn-Harris notes the complex relationship between Zionism and the opposition to it, and Antisemitism more generally.

This can clearly be seen in the case of the German leftist radicals of 1968 and after, whose espousal of the Palestinian cause embroiled them in anti-Zionist politics in a way that all too often crossed the line into Antisemitism.

The Tupamaros West Berlin group opened their 1969 campaign of bombings with a failed attempt to firebomb the Jewish Community Center in West Berlin on the 9th of November (not coincidentally the anniversary of Kristallnacht).

Even if this might have been covered by the utterly threadbare excuse that it was meant as an act of opposition to Israel’s policies, it is also clear that the member of the Tuparmaros also reproduced what Kahn-Harris refers to as “consensus Antisemitism”, which he describes as “open, unashamed, visceral hatred, disdain or abuse directed at Jews as Jews”.

Here we might cite the case of Dieter Kunzelman, whose public utterances included the claim that he considered his orgasm problems more important than the war in Vietnam (with the concomitant demand that the German state do something about it). Kunzelman made numerous references to “the damn Jews” and notoriously told Daniel Cohn-Bendit, “You’re nothing but a little Jewish pig.”

Although Kunzelman was on the intellectual fringe of the radical movements of 1968, the Antisemitic views to which he gave voice can be found in the writings and actions of other more central groups such as the Red Army Faction and the Central Committee of the Roaming Hash Rebels.

Even in West Germany, in which acknowledgement of the Nazi past and the horrors of the Holocaust might have been expected to impress themselves on groups whose politics involved the overt opposition to racism, Antisemitism of both the consensus variety and what Kahn-Harris refers to as selective Antisemitism were present and influential.

The distinction between the two Antisemitisms is central to Kahn-Harris’s project of analysing why and how it is that Antisemitic views coexist with broader antiracist commitments. His central area of analysis is modern Britain, where practically everyone claims to be against Antisemitism.

In doing so, he runs up against and acknowledges some of the central problems presented by Antisemitism in the industrialised mass democracies of Europe and North America.

Is it possible to consistently evince support for the Palestinian cause while eschewing the Antisemitism (sometimes quite overt) of some of their more aggressive supporters? Is it possible to be a critic of Zionism, or of some elements of Zionism, without also delegitimising the Jewish state?

Kahn-Harris notes that Antisemitism has become “strange” in the sense that it no longer presents an obvious and unequivocal target. This is a central element of the challenge of Antisemitism: consensus antisemitism is clear and unequivocal, but things get very blurry at the edges and the devil is in the details.

Antisemitism, Kahn-Harris notes, has been “ruined,” both by the Nazis and by the Jews. The Nazis ruined it with their all-encompassing policy of extermination, forcing their intellectual and political progeny to address the question of whether they are for that solution, or some “milder” elimination of Jewish influence (falling short of eliminating people).

The Jewish ruining of Antisemitism, so Kahn-Harris argues, has to do with its politicisation, both within Jewish communities and without. The question of who is an Antisemite and who isn’t, or which views are Antisemitic and which aren’t has made the racism unrecognisable.

Of course, it was always bound to happen. One of the odder myths of modern politics and culture is the idea that there are some things too important to be politicised. In fact, the more important something is the more cultural or political power with which it is imbued, the greater the likelihood (rising to certainty) that it will be politicised.

The history of the Holocaust is an excellent case in point. Theodor Adorno famously argued in the 1950s that the Holocaust had resulted in the creation of a new and notionally unproblematic categorical imperative: never again.

But as the Holocaust moved from a narrative of Jewish weakness in the late 1940s and 1950s to an illustration of the universal threat facing Jews as a whole, questions surrounding the Holocaust and Antisemitism were inexorably politicised.

In recent decades, this politicization has resulted in a degradation of the common bases of argument and factual analysis which has added layers of complication to assessing which views are properly Antisemitic and precisely how.

The result has been strong partisan assertions and denials of Antisemitism at the extremes and the feeling among many in the middle that it is impossible to discern systematically where the boundaries lie.

Kahn-Harris addresses a wide range of issues relating to the difficulties of definition and the politicisation of Antisemitism in modern media and political cultures. His style is conversational and refreshingly moderate, especially by the standards of discussion of racism in general, and Antisemitism in particular, where the temperature tends to be quite high.

Ultimately he seems to acknowledge that many of the disputes are, if not unresolvable, in practice unresolved. Kahn-Harris comes out in favour of a mode of tolerance that accepts the fact that people have to find a way to live with those whose views (or persons) they abhor.

This is an eminently sensible approach given the current shape of politics in the (for the moment) United Kingdom, as well as in Europe and North America.

The necessity of living with the incommensurable Other and preserving some degree of civility is a noble one. Moreover, it seems like the best that we are likely to do, given the weaponisation of race and ethnicity, again, in the West.

Kahn-Harris is also correct to note that selective love is, in a certain sense, as challenging as selective hate. Philosemitism, especially when promoted by the evangelical right, is only somewhat less creepy than Antisemitism.

Strange Hate is a particularly important book for its systematic analysis of the ways that racism and antiracism intermingle, and how the problems that these conflicts engender might be overcome.

It’s particularly useful for those fighting racism, who want to understand how important Antisemitism remains in influencing hatred, in general, in the era of neoliberalism.

Walter Ruttmann’s 1927 film Berlin: Symphony of a Metropolis is strangely suited for these times, when traditional moviegoing is in perilous decline, providing a way to disentangle the art of cinema from that mode of consumption. END_OF_DOCUMENT_TOKEN_TO_BE_REPLACED

That the first song on Soulside’s new LP ends with a sample from a 1952 American civil defence film Duck and Cover, about a nuclear apocalypse, says it all. END_OF_DOCUMENT_TOKEN_TO_BE_REPLACED

Based on the flurry of academic titles about it over the last decade, punk has become as common to college curriculums as it is to the Top 40. Why this took so long is baffling. END_OF_DOCUMENT_TOKEN_TO_BE_REPLACED