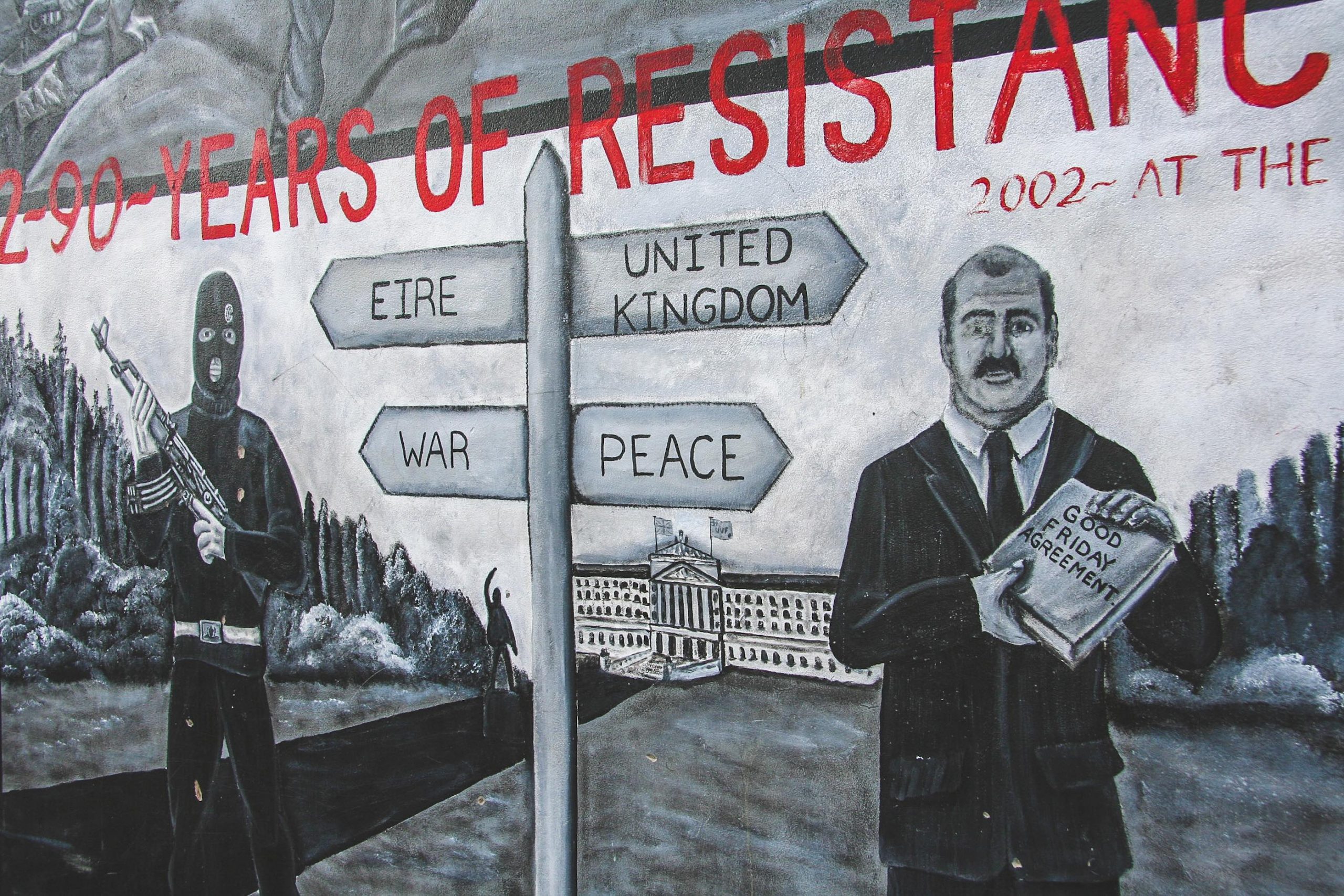 With good reason. Regional politics have become more dysfunctional than at any point since the signing of the Good Friday Agreement two decades ago. And people are getting killed.

The accord was the result of a complex, many-faceted process of negotiation, an important element of which was the shift by nationalist paramilitary organisations (most prominently the Provisional Irish Republican Army) from a military strategy to a predominantly political one.

The story of that change is one of the most important threads of Irish history since the Second World War. But the democratic transition cannot be said to have resolved the long-simmering intercommunal conflicts in Northern Ireland.

In One Man’s Terrorist: A Political History of the IRA, journalist Daniel Finn traces the narrative of this transition with admirable clarity. This is a story that is difficult to tell for a number of reasons, the most prominent being the intensely secretive nature of the Irish Republican Army, and the peculiarities of Irish politics.

The de-escalation of tensions surrounding the Good Friday Agreement has led to a degree of relaxation of the former. There are now a number of thoroughly researched texts on the history of the conflict in Northern Ireland (for instance Ed Moloney’s A Secret History of the IRA). Various former activists in the organisation have broken the code of silence to give first-hand accounts of its internal history and culture.

Any attempt to tell this story inevitably runs up against the fact that Irish politics are dissimilar to those of any other European state. This starts from the history of British colonialism in Ireland beginning in the 12th century and continuing, in diminished form, in the wake of the Irish War of Independence (1919-1921).

The British retention of the six of the nine counties of Ulster under the terms of the Anglo-Irish Treaty of 1922 divided the country but also divided the nationalist community, many of whom felt that this constituted an illegitimate dismemberment of the country.

It is reported that IRA leader Michael Collins said upon signing the Anglo-Irish Treaty, “I may have signed my actual death warrant tonight.” These words proved prescient, as Collins was subsequently killed eight months later in an ambush by forces opposing the treaty at Béal na Bláth in County Cork.

The consequences of the division between the pro- and anti-treaty wings of the IRA were far-reaching. To this day, the two most longstanding political parties in the Republic of Ireland, Fianna Fáil and Fine Gael are outgrowths of that political division, each comprising networks of acquaintance and influence with political programs that do not map onto the left-right binary common to European democracies.

The politics of the IRA itself are further complicated by the never entirely resolved political tensions stemming from its own founding period.

The Easter Rising of 1916, which looms large in the history and hagiography of the organisation, was originally planned by a group led by Patrick Pearse, a conservative Catholic with pronounced romanticist leanings. But they were compelled by circumstance to include the leftist (perhaps Marxist) labour leader James Connolly, whose Irish Citizens’ Army they were afraid might beat them to the punch.

The conflict between these two political tendencies was never resolved at the time and persisted throughout the history of the IRA.

Finn’s narrative begins in the 1920s, devoting most of its focus on the period beginning in the 1960s when the IRA began to rebuild itself from the disastrous bombing campaigns of the previous decade.

The IRA of the 1950s and early 1960s was a secretive and self-contained organisation, with a pronounced tendency toward vanguardism. Not much energy was devoted to politics, or to theorizing how the struggle was supposed to work, other than the fighting of a guerilla war with the ultimate goal of reunifying the country.

In a severely weakened operational condition in the early 1960s, the IRA was unable to provide much in terms of positive service to the nationalist community. Most worrisomely, it seemed unable to fulfil the task that preoccupied most of its partisans in the heavily ghettoized nationalist sectors of Northern Ireland: protecting communities from violent attacks by their loyalist neighbours.

Northern Ireland was an anomaly among European political entities, one in which sectarian divides dating back to the 17th century played a dominant role, sometimes synergising with considerations of class, but often trumping them.

The loyalist community made up roughly 60% of the population. Its politics were strongly shaped by Protestantism and narratives of conflict with the predominantly Catholic nationalist communities.

Loyalists controlled the political institutions of the region, using gerrymandering to retain dominance in places such as Derry where they were in the minority. This allowed them to limit both economic opportunity and housing available to the nationalist community, thereby perpetuating their demographic majority over them.

Although the nationalists had a rather higher birthrate, the lack of opportunity resulted in significant patterns of economically-driven emigration.

The nationalist community was also periodically subjected to bouts of violence, with loyalist gangs rampaging through nationalist areas. The response of the local police force, the Royal Ulster Constabulary, ranged from disinterest to active connivance, and thus it was that the nationalists came to look to the IRA to provide a modicum of security.

The period of the IRA’s operational incapacity in the early 1960s happened to overlap with the rise of civil rights militancy in Western Europe.

Northern Ireland saw the rise of groups that sought to work along the lines established by the civil rights movement in the United States, with groups like the Northern Ireland Civil Rights Association (NICRA) and People’s Democracy (PD) undertaking marches and other forms of militancy in an attempt to challenge loyalist domination.

The rise of this kind of political activity was a source of intense debate within the IRA, with some looking to work with (or infiltrate) these groups, while others clung to an exclusively military approach.

This distinction tended to have distinctly political overtones. Figures such as Cathal Goulding and Seamus Costello, who favoured cooperation with the civil rights movement, also evinced a pronounced leftist political bent, drawing on the traditional veneration of Connolly.

The most prominent difficulty with this approach was (and is) that the politics of Northern Ireland simply do not fit neatly into more traditional accounts of economic issues. The prominence of sectarian ideologies tends to get more pronounced the further one goes down the income distribution, particularly the loyalist community.

This certainly has something to do with the role of community relationships in providing and defending access to housing and other resources. Nonetheless, the sectarian influence is profound. One of the difficulties on which the leftist factions foundered was the failure of attempts to forge connections between working-class communities across the sectarian divide.

Relations between the civil rights movement and the IRA were always somewhat fraught, although the British government tended to assume that the former was simply a front for the latter. But, as Finn makes clear, there was a good deal of mutual influence, with many in the IRA recognising that community agitation could, at the very least, augment the goals that they were pursuing militarily.

This division would ultimately lead to a split in 1969 between the Official IRA, which took a militantly leftist line, and the Provisional IRA, which was more conservative and predominantly militarist.

The events of Bloody Sunday on 30 January 1972 caused a somewhat ironic reversal in the nature of the relationship between the civil rights movement and the IRA. The killing of 14 unarmed civil rights marchers by British paratroopers, and the British government’s subsequent attempts to justify the massacre dealt a catastrophic blow to the civil rights movement. It was a massive recruiting boost to the IRA.

Much of the later history of both wings of the IRA, and of the INLA, which split off from the Officials in an even more avowedly Marxist direction, relates to the problems of balancing systematic political action with the need to keep activists onside through the pursuit of military operations.

As One Man’s Terrorist shows, this was less of a problem for the Provisionals, for whom politics was mostly an afterthought until the rise of a new, younger leadership group in the 1980s.

The Officials, by contrast, suffered from the tendency of activists committed to the physical force tradition to flake off to the Provisionals when the organisation shifted its balance in favour of political initiatives. This eventually led to the disintegration of the Officials, and later to that of the INLA, although not without a series of gruesome internecine struggles along the way.

For the Provisionals, the sea change came with the rise of figures like Gerry Adams, Danny Morrison, and Martin McGuinness. All three had been active in military operations, thus certifying their bona fides with those committed to the use of force.

But their strategy of the Armalite and the ballot paper, developed during long stretches in the cages at Long Kesh, created the basis of a new approach for the Provisionals, one that would eventually lead to the Good Friday Agreement.

The transition to a predominantly political strategy resulted from an almost simultaneous recognition by the IRA and the British government that neither side could be defeated militarily. From that point, the question seemed to be whether a negotiated solution could be found before the more militarist elements of the IRA decided to abandon the process.

Finn’s book provides a precise and thorough account of an exceptionally complex history. Although many elements of this story have been described in more general histories of the conflict, One Man’s Terrorist tells the story in a coherent way and makes sense of the byzantine internal struggles of the various wings of Irish Republicanism.

The description of the interactions between the IRA and the civil rights movements of the 1960s is particularly valuable, bringing much-needed clarity to the processes of mutual influence that went on in this crucial period.

Daniel Finn also shows consummate skill in explaining how Adams, McGuinness, and their collaborators managed to bring the resolutely militarist and abstentionist Provisional IRA to the point of decommissioning its weapons and participation in a political process.

One Man’s Terrorist is particularly timely given the current political turmoil in the United Kingdom. Once again the politics of Northern Ireland have become important in Westminster, not only because of the issue of the hard border but also because the Tory majority in the House of Commons is now only maintained with the connivance of the Democratic Unionist Party (although this may change in the coming elections).

As Finn shows, the transformation of the conflict in Northern Ireland was accomplished in a way that didn’t resolve many of the underlying conflicts. The loyalist community remains, to a great degree, unreconciled to their nationalist neighbours (and vice versa) and deeply opposed to anything that smacks of integration with the Republic of Ireland.

Still, the end of the military conflict was greeted with relief by most in the region. Northern Ireland has been without a functioning government now for the better part of two years. Yet it muddles on, and perhaps this is the most profound outcome of the peace process.

Photograph courtesy of carloriccardi. Published under a Creative Commons license.

Korean-German philosopher Byung Chul-Han is the quintessential postmodern figure. Having to come to Germany to study metallurgy, he switched fields and mastered the argot of German philosophy. END_OF_DOCUMENT_TOKEN_TO_BE_REPLACED

François Truffaut’s  The 400 Blows is one of cinema’s all-time classics, the 1959 film that demonstrated how deftly a new generation of French critics could transform themselves into the filmmakers of la nouvelle vague. END_OF_DOCUMENT_TOKEN_TO_BE_REPLACED

Everyone has something to say about the violence at the 2022 Oscars, whose host called “the greatest night in the history of television”. END_OF_DOCUMENT_TOKEN_TO_BE_REPLACED