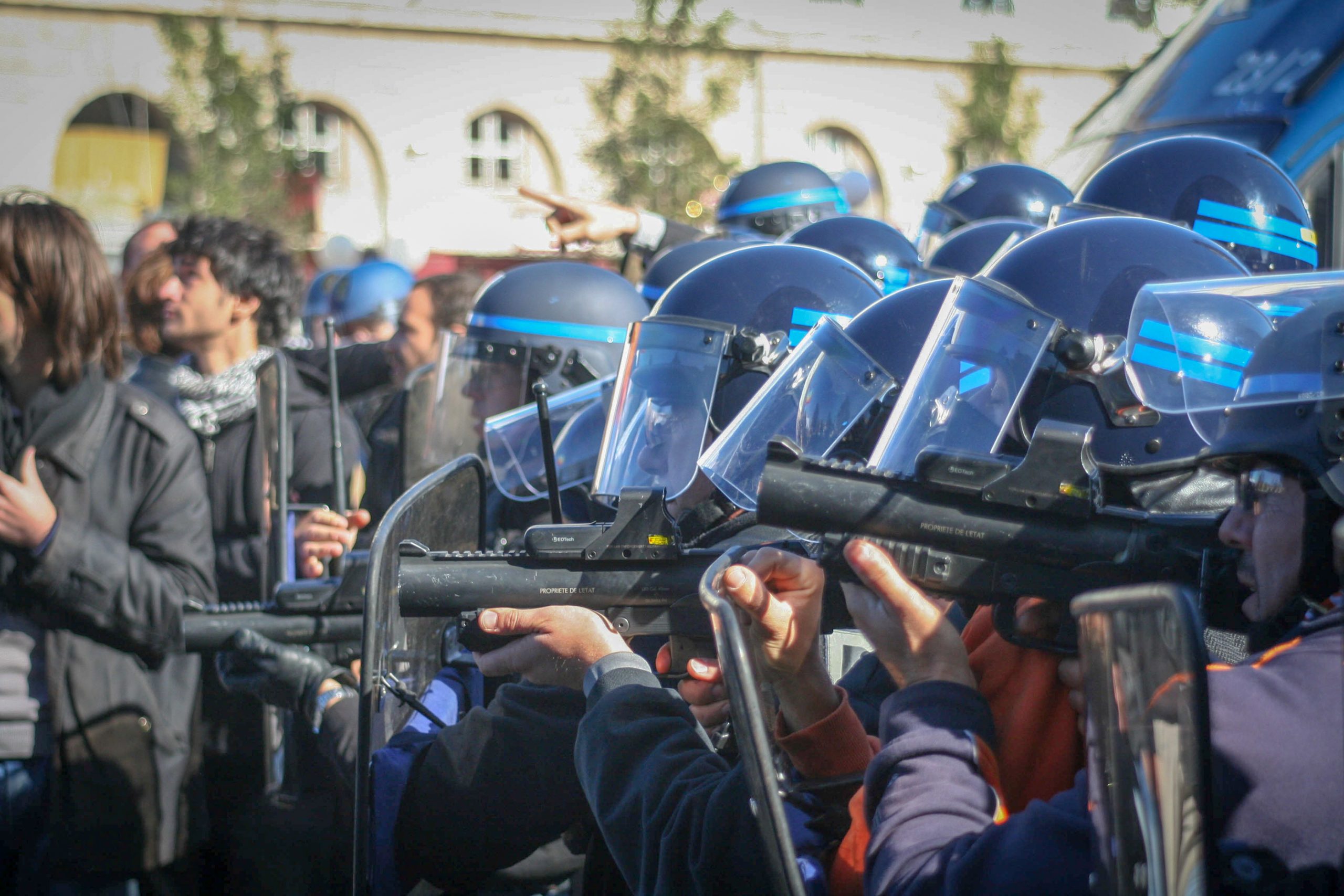 In response, Poulin tweeted that he had nothing but respect for the police, and was not a hater, but was critical of police behaviour.

The Council of Europe voiced its support for the journalists attacked by the union, condemning the Tweet. Longstanding French newspaper Libération wrote a critical feature, in support of Poulin and the other journalists named in the SICP tweet, as well.

The Battleground’s Maxime Sattonnay spoke to Poulin about his experience and what this says about the Macron government’s attitude towards the press.

Maxime Sattonnay (MS): Could you explain to us what happened to you a few weeks ago on Twitter with the SICP?

Alexis Poulin (AP): As part of my work I use Twitter a lot. I have been denouncing the police violence that we have seen during the Gilets Jaunes protests in France. A police union, the Syndicat indépendant des commissaires de police, tweeted to a journalist saying that myself and several other journalists are enemies of the French police, that we are using hate speech against policemen and that we are dangerous.

On the list, there are 5 names.  Myself, together with three journalists: David Dufresne, Taha Bouhafs, Gaspard Glanz, and an anonymous account, @leGneral2. Everyone was given a nickname associated with their name. Mine was “Le Haineux”, meaning that I am promoting hate speech, which I never did.

SICP tweeted this saying that people were against the police because of the anti-police speech that we were expressing on Twitter, in our articles, and in our videos of the demonstrations.

The problem is not journalists. The problem is that there has been some police violence in recent months and documenting this shows that there is an issue. Not amongst policemen, because they do a very difficult job. We’re very aware of this. But due to the chain of command and the fact that Christophe Castaner, who is the interior minister, decided to authorise the use of force, mutilating French protesters by using way too much LBD (Flash Ball riot guns.) This is the issue. The government decided to repress protesters.

This became a bigger problem because journalists also have been targeted by the police. For example, the 5th of December was a big day of demonstrations against the pensions reform in France. 25 journalists were hurt by the police. This has never been seen before.

A French union asked me if I wanted to press charges against the police commissioners union, and I said no. I just wanted to meet with them and talk because I think that they are playing a dangerous game. I would like us to know each other in person because this is all about caricatures and not about reality. But they did not respond to my offer.

If we want to protect our democracy we need debate and dialogue. If we are just on social media exchanging insults it’s not going to work.

MS: How hard is it nowadays to be a journalist and to work freely in France?

AP: Well, if you are a street reporter it is very dangerous. People wear a lot of protection. They write PRESS on them everywhere. But even with this, the police don’t seem to respect press cards.

For example, some policeman said, “I don’t care about your card.” Some policemen have been seen ripping-off press cards or saying “you don’t have the right to film” even though it is legal to film in public space.

This climate of police violence has made it very difficult for journalists to do their job in the streets amongst the protesters.

MS: How can you explain the impunity of the French police?

AP: The police use the fact that they are covered by their hierarchy. We know that Castaner is covering this. Even the police of police (IGPN) who are supposed to find out who is responsible for the police violence that led to people losing eyes, hands or having brain injuries, (aren’t doing their job).

Out of all the complaints that have been filed with the IGPN, only 15 have been investigated. The IGPN answer is “oh sorry we can’t find who was responsible for this”.  Clearly it’s a cover-up.

One of my last pieces in Le Monde Moderne was about Macron being the president of violence. Macron is supposed to be the guarantor of democratic institutions but he’s not respecting any of this.

If you are the president you have to denounce the situation, you have to stop this disaster. Policing is not about hurting people. It’s about making sure people don’t get hurt.

And of course, the protestors back in December 2018, were mostly rioters. It was very violent. It was a war in the streets of Paris. So, of course, back then it was terrible.

The problem that we have right now is that our leaders are behaving like mobsters because they are covering up this violence.

MS: Do you think that press freedom is at stake in France?

AP: I wouldn’t go that far, but clearly there is something rotten in the Republic. If you look at it that way, free speech is in danger.

When you are a journalist in France you can see that it’s getting difficult to do your job: filming in the streets or going where you want.

I think the climate in France is very bad overall and it’s not just because of the government or the protesters. Political parties like France Insoumise, Rassemblement National and even La République en Marche now tend to blacklist the journalists that they don’t want to see at their meetings.

They don’t give press accreditations to everyone and everybody seems to think that this is normal.

Like in many other countries, it is difficult to work and live on a decent salary as a journalist in France. The entire industry is in bad shape, so you have to be careful about what you publish if you don’t want to end up in trouble.

There are a few independent media outlets but most of the media are owned by big corporations and business leaders such as Dassault, Xavier Niel the founder of Free, or Bernard Arnault, the owner of LVMH.

It’s the same oligarch ownership of media that we’ve seen for years and the fact that are so few independent media outlets is critical and is a problem for the public debate.

MS: So journalists think twice before criticizing powerful people fearing that they will lose their financing?

AP: Pretty much. I would say that there’s a lot of self-censorship.

I don’t know if you heard of the “Zemmour” case. Éric Zemmour is a far-right pundit. He gave a speech where he clearly said that Islamists are like an army endangering France and we should go to war against them. What he said was very very violent, it was pure hate speech. But now he ends up having a daily show on CNews.

Some people tried to oppose this, this calling for a boycott of CNews. It lasted for two weeks, but now he’s got his daily show and it’s kind of normal.

Zemmour was fined around a thousand euros for hate speech but doesn’t stop. The climate is very bad. I have said in interviews about the Zemmour case that he should be more cautious about what he is saying. It is not about censorship. It’s about being responsible when you have an audience.

MS: So here we have a right-wing commentator being able to use hate speech on live television and on the other side you have serious journalists that will self-censor out fear?

AP: Yes, it’s pretty sad. There is something dysfunctional and the debate is very poor. Journalism is not very loved as a profession in general. But if you add to that the fact that the politicians, the cops and everyone else is turning to journalists saying you’re doing a very bad job, this is pure populism and this is very dangerous for democracy.

That’s what we’re living now in France but it’s everywhere in Europe. I mean, what has Boris Johnson done since he has been elected? The first thing he said is that he will cut the BBC’s budget because he said that the BBC was against him during the campaign. How wrong is that?  This is not acceptable. Baby Trumps are everywhere, pushing the limits, saying that media organisations are fake news.

Populists want to tell lies and not have journalists hold them accountable because lying seems to be part of their business model: creating a fake reality and pretending this is reality and then getting elected on their distortion of reality.

And we accept that. I think that the press is not organized to curb or even to stop these populist movements in Europe.

Look at Trump. He was impeached but it doesn’t matter. There is just going to be a Senate debate and nothing more and he is going to be reelected next year, I guess.

And what has the press done so far? Try to ignore populists or try to debunk fake news with a lot of fact-checking.

It’s not enough. People are not interested in news. They love populists saying that all of our problems are caused by foreigners. But it’s never about the fact that they just want power, at any cost.

MS: How can we fight back?

AP: I think that we should be more offensive as a profession. I think now, for example, there should be a boycott of these guys when they have press conferences or when they say something, we shouldn’t bring cameras.

Of course, people will say that this is censorship. But at a certain point, what is the point of promoting lies and fake news? Because this is what they are about. Debunking these lies is not enough.

There should be a strike of some sort. This sounds very French but take the example of Hong Kong. Journalists came to a press conference to denounce police violence with helmets and protective gear. Nothing like that has been done in France.

It is very worrying that France is not up to speed on the loss of liberties that we’re seeing right now.

MS: Since populists seem to be quite good using social media, does it mean that they might not actually need traditional media anymore?

AP: They are very advanced on social media but social will not get them the same audience that you get from mainstream media coverage. They need traditional media in order to recruit new people.

Actually, it is social media literacy that helps the most in debunking fake news. It was mainly people over 60 that are sharing fake news because they are not aware that it is fake news.

I think for younger generations, social media is a media like others. They are very aware of what they see and what they share.

MS: In this time of crisis for media organisations, do you think that there is a business model for an independent press to survive and do its job that is so needed by our democracies?

AP: Mediapart is a good example because they rely on their subscribers. It is very difficult to get paid for writing quality news because a lot of people are not ready to pay for subscriptions or as much as media outlets need. That business model is still to be invented. At the moment, there is no other solution. Either you pay for quality news or you don’t get it.

Platforms like Google and Facebook are a disaster for all media. They seemed good at first as a tool to reach a wider audience. But, in the end, they are just putting free press in danger.

Adrestia are one of the most important hardcore bands in Sweden today. END_OF_DOCUMENT_TOKEN_TO_BE_REPLACED

The Forde Report represents a new stage of the malaise afflicting the Labour Party. END_OF_DOCUMENT_TOKEN_TO_BE_REPLACED

Everyone’s going to Poland. Not just from Ukraine, but Western Europe. END_OF_DOCUMENT_TOKEN_TO_BE_REPLACED