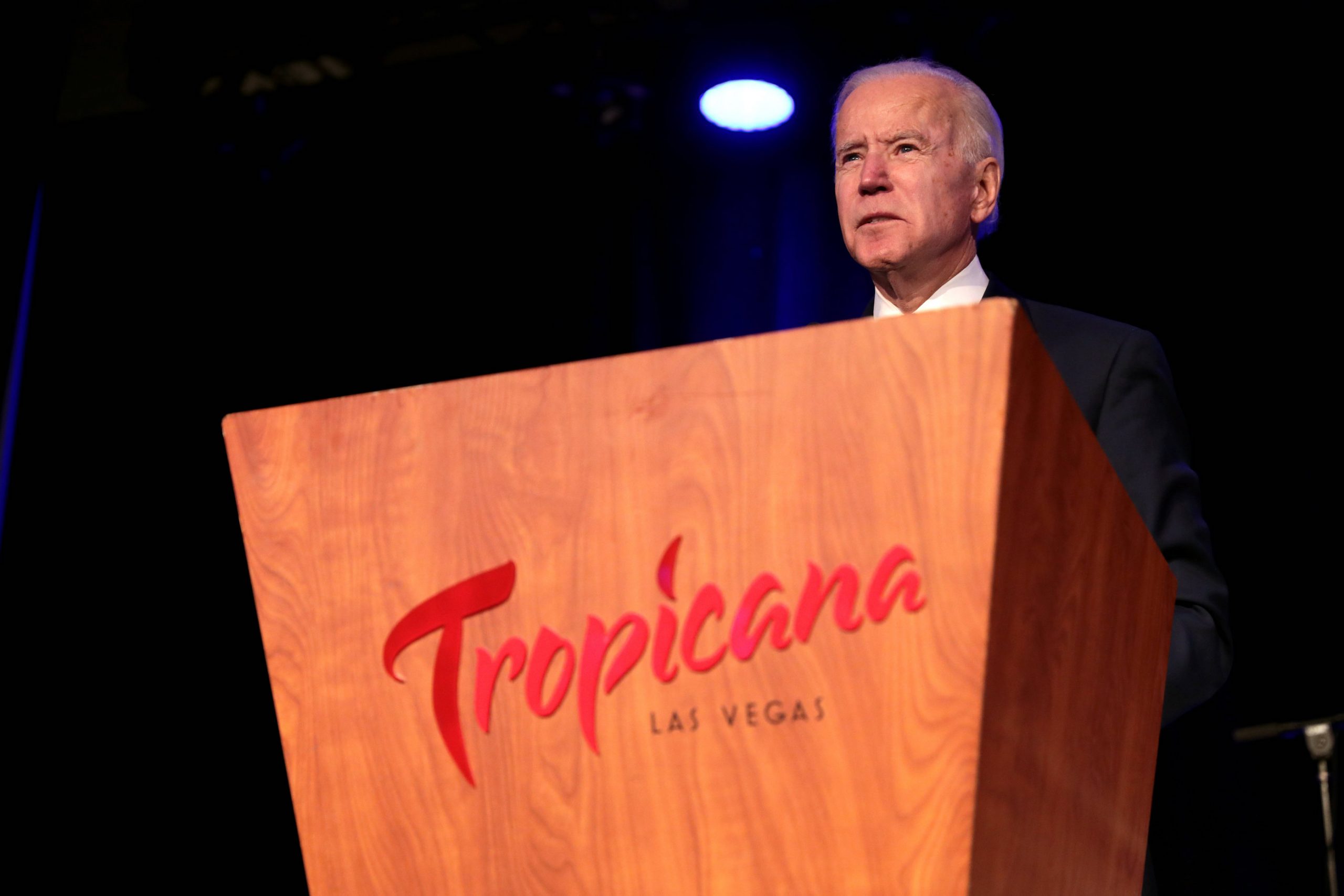 Where's the juice? Joe Biden, on the campaign trail.

For all the talk of a change in direction after the catastrophic failure of Hillary Clinton’s campaign four years ago, regular service has been restored.

Despite all the radical talk and socialistic ideas, the outcome of the Democratic Party’s nominating process is, as it so often has been: white, male, and superannuated.

Cynics among the cognoscenti are wont to offer the idea that there is little difference between the two parties. Certainly, there is an element of truth here.

Both the Democrats and the Republican exist to serve the interests of America’s 1%, even if they sometimes diverge on which fraction of this group they cater to most directly.

If the Democrats nominally represent the leftward end of the political spectrum, this means the left-wing of finance capital rather than any practical commitment to the interests of the proles.

But there is a significant difference in terms of the ways that these parties are approached by their voters.

One of the real advantages possessed by the post-Reaganite Republican Party is the conviction by vast numbers of the US electorate that the GOP is fundamentally committed to their interests, irrespective of (or in some cases precisely because of) its less savoury character.

Thus Donald Trump retains his popularity with Evangelicals even in the face of his very tenuous connections to the moral and metaphysical tenets that they hold dear.

Tax cuts for the wealthy and packing the federal bench are matters of central importance to American Christians.

The fact that they might be achieved by a philandering divorcee for whom the Bible is certainly terra incognita is a matter of secondary concern.

The Lord works in mysterious, and sometimes meaningless ways.

The Democrats, by contrast, spend their time endlessly debating supporting candidates who deviate as little as possible from the aged white male model that has accounted for all but two of the Democrats’ successful candidacies.

Of the two deviations from this trend, one was Kennedy, who was younger than the norm, and Catholic, and who was assassinated roughly three years into his presidency.

The other was Barack Obama who, although African American and given to leftist rhetoric, turned out to be slightly to the right of Ronald Reagan.

The nomination of Biden, a certainty now barring some untoward occurrence, is the perfect outcome of the process from the perspective of the Democratic Party.

The early days of the primaries presented a panoply of non-standard choices, including women and people of colour. By the time the first few actual primaries were over, so was the challenge of those among the field who weren’t white.

Then, Elizabeth Warren fell by the wayside and the choices were old white and conservative versus old, white, and nominally socialist.

And then there was one – Bernie Sanders – and the Democratic establishment could proudly aver that there had been a robust debate at the end of which the voice of the people had been heard.

Yesterday’s Man, by Jacobin contributor Branko Marcetic, presents the most extensive account of the bill of goods that the Democratic electorate has been sold so far.

Marcetic’s thoroughly researched book presents a nuanced picture of Biden, showing that he is a combination of bluster, bungling, and unacknowledged conservatism that makes him the quintessential candidate of the modern Democratic Party.

One of the most interesting features of Joe Biden is the stark divergence between his liberal rhetoric and his (in practice) quite conservative practical views.

In part, this is the standard tendency of politicians to tailor their message to fit the sorts of things that they know (or assume) that their audiences want to hear.

But Biden has frequently made a point of highlighting his liberal credentials (even disingenuously claiming to have been part of the civil rights movement of the late 1960s) while consistently tacking to the right on issues from busing, to drugs, to crime.

Joe Biden hales from Delaware, one of the smallest states in the union. As he has mentioned in addresses to southern audiences, it’s the only former slave state to have sided with the Union during the Civil War.

His early interventions in politics were as an anti-busing activist in Delaware, mobilising the neurotic fears of whites against incursions by blacks into their better-funded school systems.

At the federal level, Biden worked extensively with Republicans to promote the tough on crime agenda that characterised their domestic politics under Reagan.

Joe Biden was a consistent proponent of mandatory minimum sentencing, frequently drawing alarmed responses from judges and lawyers who rightly viewed those policies as ineffective in reducing crime and liable to result in massive increases in the numbers of people incarcerated.

The Democrat has often signalled his willingness to reach across the aisle and work with his Republican counterparts, even in the current era of hyper-partisanism. But, as Marcetic notes, Biden has in fact often positioned himself to the right of GOP, touting his desire to defend the middle class.

This has not, however, extended to attempts to limit the depredations of the lending system.

Delaware is notorious as the state with the least restrictive corporate laws and lowest corporate tax rates in the nation. It is also home to most of America’s largest companies and has sold itself as a felicitous venue for corporate bankruptcies.

Yet while fighting to preserve his state as a place where troubled corporations can seek relief from their creditors, Joe Biden was a strong supporter of legislation that made bankruptcy protection significantly less available for private individuals.

Perhaps the most damning element of Biden’s political career is the role he played in elevating right-wing zealot Clarence Thomas to the US Supreme Court.

As chairman of the Senate Judiciary Committee, Joe Biden showed no compunction in supporting the candidacy of Thomas, an administrative judge of notoriously extreme views. Moreover, Biden attempted to suppress Anita Hill’s claims to have been sexually harassed by Thomas.

On the most sympathetic account, Joe Biden’s role in Thomas’ confirmation was that of a bungler. But it is equally clear that he was disinclined to hear Hill’s well-founded claims.

Biden’s standard modus operandi has consistently been to offer the occasional bit of liberal window dressing while voting in ways that show him to have been a Blue Dog Democrat avant la lettre.

His inclusion on Barack Obama’s presidential ticket was clearly a matter of the Democratic Party wanting to have a way of avoiding pushback against the notionally radical ideas of the junior senator from Illinois. The concern proved to be ill-founded.

Although the 2008 economic crisis that blighted the Bush Administration left the Democrats in control of Congress and the presidency, Obama was more than willing to limit his government’s agenda to the passage of health care bills heavily pilloried as socialist.

Finally, at what must be the end of his political career, Joe Biden has one more opportunity to grasp the brass ring. His presumptive victory in the Democratic primaries is a testament to the view of the party establishment that Hillary Clinton was simply the wrong candidate rather than drawing the conclusion that the problem was her policies rather than her person.

There continues to be extensive debate within the US left as to whether Biden is actually a more attractive candidate than Sanders.

Surely Joe Biden is more appealing to the party’s mega-donors and less threatening to the sort of white suburbanite on whose favour the Democratic Party’s strategists profess to depend.

Biden is also supposed to be more attractive to African American voters. He certainly polled better. Sanders failed to establish much traction with them, even at the height of his success.

But the question of whether Joe Biden can successfully challenge Trump in November remains open.

His advanced age and occasionally loose grip on reality are hardly conducive to inspiring enthusiasm among younger voters.

Biden is the political equivalent of an empty signifier. His politics are non-existent.

Joe Biden is meant to be that thing that so many Americans want, or think that they want: Trump minus the crazy.

For the Democratic Party, Biden’s appeal is a holdover from an America long gone. The chummy politics of the Senate, where he thrived, are a thing of the past.

And while Donald Trump’s supporters seem to view the occasional sexual assault as a mark of virility, the fact that Joe Biden has been accused of sexual misconduct presents a much greater prospect for turbulence.

Who knows what political era will dawn in the wake of COVID-19 (assuming the outbreak eventually ends).

What is clear is that Biden is a case of serving leftovers from a meal that was not exactly popular the first time around.

As I made my way up the trail, the late-afternoon sun temporarily muted by clouds, I suddenly realised how strange my situation was. END_OF_DOCUMENT_TOKEN_TO_BE_REPLACED

One of the great ironies of today’s politics is that when it comes to fascism, it’s often difficult to know what one is talking about. END_OF_DOCUMENT_TOKEN_TO_BE_REPLACED

This year marks the 30th anniversary of the death of Francis Bacon, the English artist whose life and radical painting during the second half of the 20th century continues to throw up new revelations and blockbuster exhibitions. END_OF_DOCUMENT_TOKEN_TO_BE_REPLACED