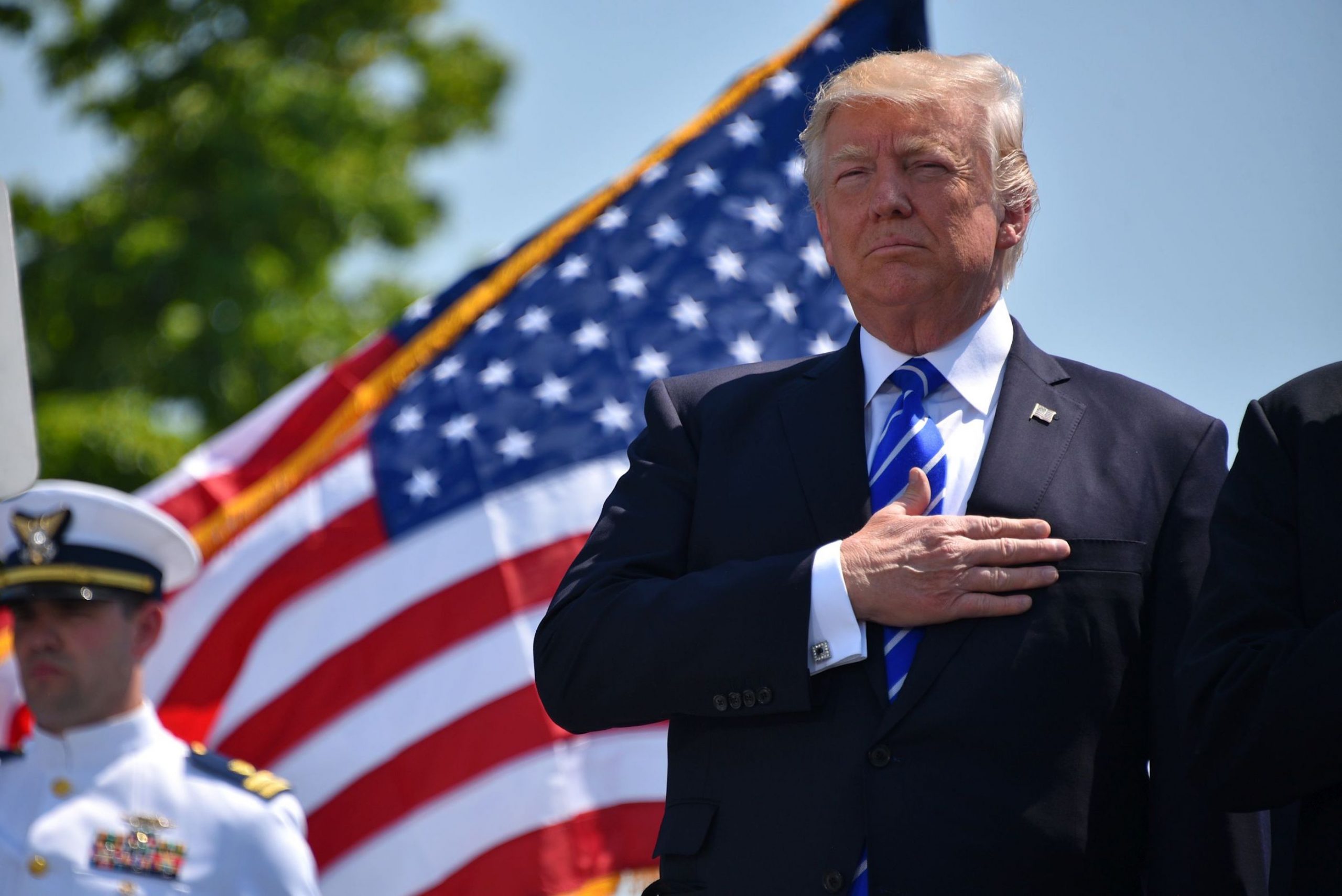 Roman salute of the heart. Coast Guard Academy, May 2017.

The electoral prospects for the president and his enablers have been varying inversely with the number of coronavirus deaths in the United States.

Even though there is no chance that the election date could be changed, the fact that Trump expressed this view in public has had repercussions far beyond America’s borders.

The US president has now taken on the role of the small-town lawyer arguing a losing case.

Having nothing to stand on in terms of notable achievements, Donald Trump is clearly hoping for some kind of deus ex machina to save him from losing the popular vote.

Of course, as most of the American press immediately noted, the president does not have the power to set the date of the election. That power is reserved by Congress.

Should a new head of state not be selected by 20 January, a process would ensue in which the Speaker of the House, California Democrat Nancy Pelosi, could be named president, a prospect to chill conservative hearts if ever there was one.

Quite clearly, Donald Trump has another strategy in mind, one in which the governors of the federal states would decide to reject the outcome of the popular vote and opt to settle the election via that most atavistic of American institutions: the Electoral College.

Clearly, from the perspective of an embattled Trump White House, this must seem an appealing prospect. The fact that such illusions could be entertained with fewer than 100 days left to the election illustrates the sort of magical thinking that is the wont of the current administration.

An important element of this is the way that it plays in domestic politics.

There has been a certain exhaustion among those who follow American public life. Scandals come and go with such frequency in and around Donald Trump’s administration that their very number has taxed the capacity of thinking people for outrage.

The president’s assertions about ogling beauty contest participants or grabbing women by their sexual organs, during the campaign that brought him to power, had little effect on his popularity.

More alarmingly, there remains an impulse among what is often referred to in the United States as the “mainstream media” to find a way that Trump can somehow be fitted back into the normal modes of politics.

Thus, when the president came out at his newly reanimated COVID briefing this week saying that the pandemic would get worse before it got better and appeared to follow the teleprompter, he was was declared by most major press organs as having assumed a presidential demeanour.

Then, predictably, Trump returned two days later to casting the usual aspersions against his political rivals, tweeting a video in which white-coated doctors expressed views on COVID-19 that varied from Evangelical psychoanalysis (yes, it exists) to science-fiction fantasies.

The lead figure amongst these august professionals, one Stella Immanuel, gave voice to her view that the US government had been experimenting with alien DNA and that some maladies suffered by women were the result of assignations with demons in dreams and other reveries.

On the back of this, press claims of presidential stature, however fleeting, carried rather less weight.

Unappetizing as these scenes are in terms of domestic politics, the effect on America’s international standing is more worrisome. The United States is now in a period of international competition more intense than any it has faced since before the Second World War.

It is no great intellectual feat to note that the two biggest threats to the current political and economic influence of the US are China and Russia. Each presents a different challenge, although both are clearly interested in supplanting America as the global hegemon.

The US relationship with China is the most fraught of its international engagements. Beijing has grown enough as an industrial power to challenge Washington, and it has made numerous inroads into the developing world, especially in Africa, a longstanding American monopoly.

Xi Jin Ping has attempted to cajole Trump and to lull him. The president, by contrast, has often tried to play tough guy, unconvincingly ordering the closure of a Chinese consulate in Houston, over “intellectual property theft”. In Texas? San Francisco would have been more like it.

But even Donald Trump knows that it will be difficult to operate in the international environment absent the connivance of the Chinese. The degree to which this is the case became clear months ago when it was reported the president owed tens of millions of dollars to China’s state bank.

The Chinese have been relatively quiet about the prospect of the election being moved (or annulled). It has been clear for some time that Trump is the preferred candidate for the Chinese, both because of his divisiveness and because of the ease with which he can be manipulated.

China’s political echelon has a relatively Catholic view of American politics in the sense that they worry less about what particular form it might take, and more about how its structure and economic performance might work toward the long-term interests of Chinese foreign policy.

Russia is a different matter. As Timothy Snyder has persuasively argued, Vladimir Putin’s broad geopolitical goal is the creation of states that mirror the kleptocratic institutions which, if he did not create in Russia, were at least responsible for his capacity to thrive there.

Donald Trump has given Putin a gift of sorts by driving the United States down a road that leads directly to Russian dominance. That’s the nature of his collaboration with Moscow, as post-modern as it sounds. It is a sell-out, but more to its ideological norms than a Cold War-style betrayal.

RT, the English-language purveyor of the work of Russia’s most dedicated running dogs, was quick to note the president’s election delay announcement on Twitter.

Not coincidentally, the same RT page presented a story about currency dealings between Russia and China oriented toward stripping what has been called America’s “exorbitant privilege” of printing the reserve currency used in myriad international financial transactions.

From the Russian perspective, the question of whether or not Donald Trump seizes power is moot. The very suggestion of postponing the elections has the effect of causing political turmoil and reducing the level of faith in the American government.

For Vladimir Putin, the question is, “To what degree are democratic norms in general brought into question?” It hardly matters how the political situation actually turns out.

The Trump Administration is in a process of disintegration more extreme and precipitous than any ever seen among its predecessors. It is all the more catastrophic because of Trump’s failed attempts to come to political accommodations with either of the main competitors for US power.

Despite his threats toward China, the president has yet to find a way of preventing the Communist Party from spreading its influence across Asia, Africa, and beyond. That’s a remarkable failure given the pretty penny the US has spent fighting socialism.

The case of Russia is perhaps worse. Although having less in terms of international political and economic power, Donald Trump has persistently shown a willingness to cut breaks for Moscow, not least because he views Putin as simpatico.

The Russian leader, by contrast, is more than happy to let the process of political mimesis get underway in which long-standing principles and standards of American governance are abandoned in favour of the formation of a personalist kleptocracy.

Donald Trump’s musings about changing the date of the US election can be looked at as not terribly worrisome, particularly in light of the fact that higher-ups among the Republicans in Congress have declared it a nonstarter.

But this is, in a sense, to miss the point. The true danger of Trump’s proposal lies in his signalling to two of the more potent dictators in the world that he wants to be more like them.

Brexit will turn three on the last day of January, over six years since the 2016 referendum kickstarted Britain’s race to the bottom. END_OF_DOCUMENT_TOKEN_TO_BE_REPLACED

Be careful what you wish for. It may be a cliché, but it’s one the Greens are learning all over again. END_OF_DOCUMENT_TOKEN_TO_BE_REPLACED

Before his arrest, Andrew Tate was just another influencer with bad politics. END_OF_DOCUMENT_TOKEN_TO_BE_REPLACED