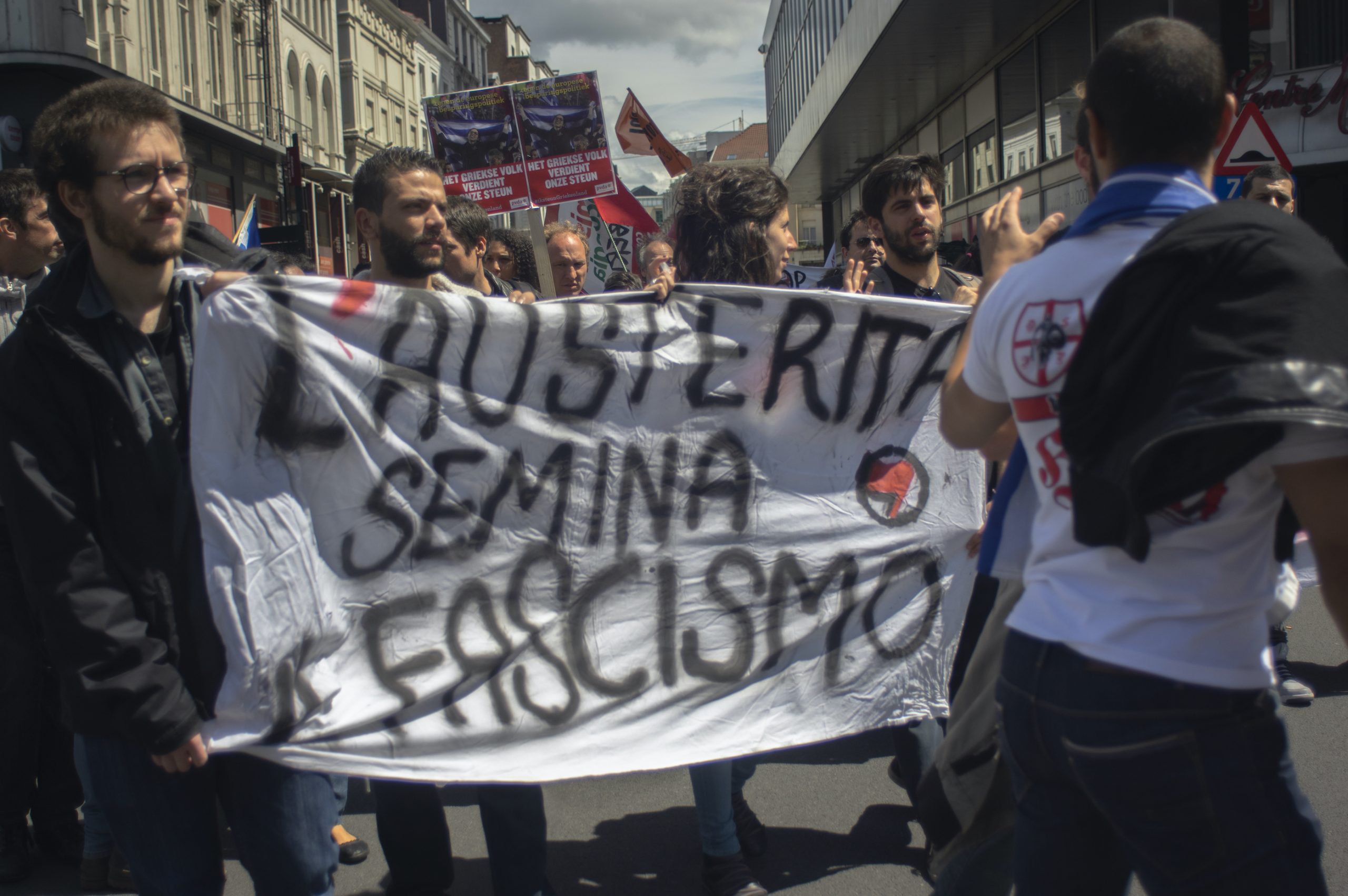 No one listens to the left. Italian protestors, Brussels.

Mussolini’s government was the first in Europe to adopt the authoritarian politics that would blight the years between 1918 and 1945.

Italy was the tip of the spear in the European Cold War, with the largest and most politically successful communist party of any of the NATO states.

The Third Republic similarly became the poster child for fiscal mismanagement in the 1990s and its parlous finances threatened EU stability in the crises of 2008 and after.

Like Il Duce before, Silvio Berlusconi helped pioneer the far-right politics that have gone global since his first government launched in 1994.

Populism, or so it would become called, would come to touch everything on the right, reaching its apotheosis in Donald Trump.

As Jacobin‘s Europe editor David Broder argues in First They Took Rome: How the Populist Right Conquered Italy, the commonly held view of Italy as the weak man of Europe, following a path distinct from other states in the region, is misleading.

Although in many respects more extreme than in other European states, the trajectory of Italian history is better viewed as a paradigmatic case of neoliberalism.

As noted, Italy led the way in the development of the far-right political movement that, has come to be known, in its various guises, as fascism.

The same could be said for post-democracy, a term introduced by the sociologist Colin Crouch to describe more recent politics but easily applied to Italy between 1945 and 1989.

This era, as Broder notes, was shaped by the competition between the Christian Democrat-led coalition under Alcide de Gasperi, and Palmiro Togliatti’s Italian Communist Party (PCI).

The tone was set by the election of June 1946, in which De Gasperi’s Christian Democrats (DC) received significant assistance from the CIA, both in terms of funding, media, and, interestingly, letters from Italian-Americans to relatives in the old country, advising them to stand against the spread of communism.

The victory of the DC created the basis for an anti-communist bloc, one which was further cemented after 1956 when the Socialist Party (PSI) under Pietro Nenni split from its alliance with the communists over Hungary, eventually joining the governing coalition in 1963.

Italy was ruled into the 1990s by an anti-communist bloc which created a system of sharing out power and position that was only tangentially related to the inclinations of the voting base.

The main thrust of Broder’s book is to describe what happened as this system broke down, both politically, with the collapse of the post-war parties after 1993, and economically, with the increasing influence of neoliberalism and the growing financial difficulties of the Italian state.

What emerges is an account of the rise of populism that differs notably from that of its best-known theorist, Dutch sociologist and Guardian columnist Cas Mudde, but which is also difficult to fit into the late Ernesto Laclau’s account of ‘the people’ making demands on democracy.

The parties that had run Italy since the war collapsed in the 1990s in the face of anti-corruption crusades, but also because the verities that had underpinned voting patterns in the era of communism had disintegrated.

In the short term, the winner was the Lega Nord, a far-right party built out of a number of smaller regional parties, dedicated to the secession of Northern Italy.

This period also saw the rise of the broadcasting entrepreneur Silvio Berlusconi. Originally running a Milan-based alternative to Rai, the state broadcaster, Berlusconi built this into an extensive media empire that worked at the level of lifestyle branding.

Il Cavaliere (The Knight), as Berlusconi came to be called, used the influence his media gave him to create a new centre-right party, Forza Italia, which touted itself as the representative of the Italian regular guy, not the debaucherous, corrupt billionaire he is.

The rise of these right-wing parties coincided with a change in the economic situation of the country. Although Italy had been dynamic and prosperous in the 1960s and early 1970s, its entry into the European Monetary Union in 1992 had significant negative effects.

The solution adopted by the Italian governing classes was repeat doses of austerity, presented to the Italian people in technocratic terms. Here we find one of those moments in which the Italian Sonderweg turns out to be more similar to the rest of Europe than previously advertised.

One of the defining features of the 1990s was that the austerity measures called for by the rise of neoliberalism were predominantly instituted by governments comprising current and former member of the social-democratic left.

The consequence of this was a further breakdown of the symbolic chains linking former leftist voters to socialist and communist parties.

Both in the United Kingdom, under the rule of Blairite “New Labour,” and in Germany, where Gerhard Schroeder’s SPD-led coalition became the executor of the Hartz IV labour market reforms, measures justified on the basis of necessity and common sense took from the poor and gave to the rich, for all intents and purposes.

This dynamic is crucial for Broder’s account. This is both because it explains the transformation of Italian politics into one dominated by right-wing populism and because it casts in relief the distinction between the myth and reality of the Italian economic situation.

Italy currently has among the lowest rates of employment among younger members of the workforce, many of whom end up living in their parents’ homes into their thirties. This situation is often wrongly attributed to an unwillingness of younger workers to take jobs beneath them.

But this view is belied by the extensive Italian diasporas in Europe and North America, many of who occupy menial jobs themselves. The problem is that there simply is not enough work to be had for a large proportion of Italian workers, and this, as Broder notes, is a result of serious investment deficiencies.

Rather than acknowledging this, the political right, comprising the Lega, Fratelli D’italia and Forza Italia, blame immigrants. The outcome is a rightwing populism similar to that of the Marine Le Pen’s Rassemblement Nationale in France, and parties such as Alternative für Deutschland (AfD) and the Nationaldemokratische Partei Deutschlands (NPD), in Germany.

Broder paints a grim picture of an electorate fundamentally disconnected from the political consequences of their voting behaviour, and thus prone to reelect parties such as the Lega, which lack anything approximating an economic program that would alter the calculus of low wages, unstable labour contracts, high unemployment, and xenophobia.

Broder’s prognosis has some very bleak elements. In his conclusion, he writes,

Deprived of a party of their own, the atomised masses have broken up into disempowered fragments, capable of sporadic signs of discontent but not to carry forth an alternative set of values, a vision of regeneration, a community built on collective pride. Italy does, indeed, have social conflict, but it is a war being fought from above, dismantling and disaggregating the historic conquests of the labour movement and driving an ever-harsher climate of resentment, division and disdain for the public sphere.

This is a dark vision, but one well-grounded in European politics. This should be a warning. The widening divisions between rich and poor portend an explosion the likes of which has not been seen since the inter-war period. And the demonization of the foreigners, as parasites absorbing employment opportunities that Europeans deserve is a narrative with a grim history.

First They Took Rome does an excellent job of disentangling the complexities of an Italian political system whose actual workings have all too often been shrouded in myth and prejudice elsewhere in Europe and North America.

Rather than an outlier, Broder shows that Italy is the leading edge of a transformation in which European neoliberalism metastasizes into something worse. Given how influential Italy is on Western politics, it bodes us well to imagine the country as our future.

Krzysztof Kieślowski’s 1976 film The Scar, which chronicles the construction and operation of a large chemical factory, breaks many of the rules that had governed narrative cinema since the silent era. END_OF_DOCUMENT_TOKEN_TO_BE_REPLACED

The Russian government is awarding prizes to Macedonian writers. END_OF_DOCUMENT_TOKEN_TO_BE_REPLACED

The 1970s was a decade of broken dreams. The end of the postwar boom brought to a close the era of middle-class liberalism in Europe and North America. END_OF_DOCUMENT_TOKEN_TO_BE_REPLACED