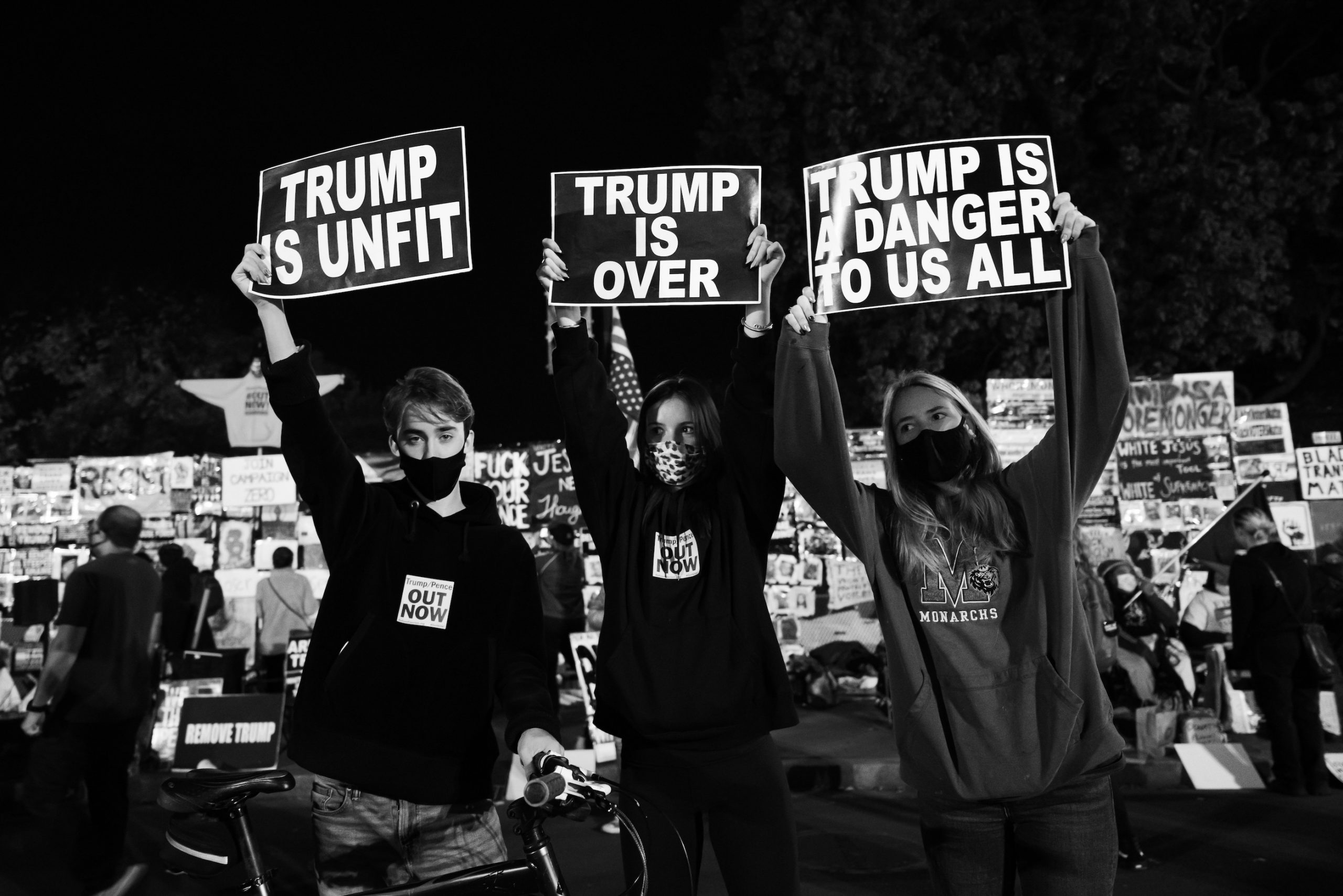 Predictably, Donald Trump has already claimed victory and has accused his opponents of voter fraud (as usual without a shred of evidence).

It’s highly likely that the whole affair will end up in the courts, which Trump has spent the last four years packing with ideologues of the far-right, in part in expectation of such an eventuality.

In the accompanying congressional elections, the Democrats held on to their control of the House of Representatives but failed to reverse the Republicans’ narrow control of the Senate.

Once again, as has been the case in a number of recent presidential elections, the Republican candidate looks likely to lose the popular vote.

President Trump is currently trailing Joe Biden by around 2 million votes, nearly a million less than the number of votes beaten by Hillary Rodham Clinton.

The story of this election, as with that in 2016, is the failure of the Democratic Party to crack the symbolic power of Donald Trump as an empty signifier.

Trump is a politician with no fixed beliefs whatever, a sort of free-floating id with the fragments of a superego struggling vainly to construct a coherent personality.

To the extent that there is anything there, it consists of reflected characteristics that his supporters attribute to him without there being any foundation in the man himself.

The Trump that exists in the public consciousness, at least on the rightward edge of the political spectrum, is a collection of narratives that constitute the reverse of the case of the individual to which they are supposed to apply:

Trump as business tycoon (he is a semi-competent real estate speculator), Trump as forceful political figure (he is petulant and mostly ignorant of day to day events in government), Trump as deal maker (he has only shown a propensity to divide), Trump as virile Übermensch (he is morbidly obese, balding and invariably appears in public covered in poorly applied instant tan).

All of these and more make up the persona of the figure that a large proportion of Americans wish that they had as their leader.

In opposition to this, the Democrats offered up Joe Biden, the former vice president who was meant to be a plain-spoken (white male) avatar of the sort of technocratic neoliberalism that a large proportion of American voters has already made quite clear they didn’t want.

In the wake of the debacle of 2016, the fundamental unfitness of Hillary Clinton was an oft-repeated nostrum among Democrats.

Clinton was unlikable, female, and came freighted with preexisting loathing, due in part to hatred for her husband’s root and branch appropriation of moderate Republicanism.

What seems not to have been proved is that Biden is unliked and unloved in precisely the same measure as his predecessor.

To his credit, Joe Biden ran a campaign grounded in many reasonable precepts; multilateralism in international affairs, the recognition of man-made climate change, science-based public health measures to control the pandemic.

But in a country where the death of more than 200,000 people has been met with the bitter demand to be able to patronize the local McDonalds without facemasks, such an approach appears to have gained little traction (at least among those who didn’t already agree).

The United States seems set to spend another four years destroying the foundations of its own political institutions, a condition which it is difficult for many beyond her borders to comprehend.

It helps to remember that, although the US is a large and complex polity, the division between the Republicans and the Democrats makes the underlying variations easier to comprehend.

At the end of the 19th century (and for much of the 20th) the Republican Party was the party of big business, while the Democrats were the party of white populism with its main power base in the solid (white) South.

The Democrats always evinced a sort of “small l” liberalism, bordering at points on progressivism, but always wedded to the racial hierarchy that formed its primary basis of super-regional solidarity.

This began to change in the era of Franklin Delano Roosevelt’s New Deal. Democrats forged links to northeastern liberals, but the failure of FDR to make any significant moves toward racial equality is a testament to the continuing hegemony of the South.

In the early 1970s, a series of overlapping shifts took place. Southern whites completed their wholesale shift to the Republican Party, having been convinced by the Republican “Southern strategy” that their economic interests were secondary to their racial hegemony.

In his victorious presidential campaigns of 1968 and 1970, Richard Nixon espoused the cause of “working class” whites, whose status was being degraded by the petering out of the post-war boom and (so they were led to believe) the rising power of non-white ethnic minorities.

The Democrats hitched their wagon decisively to a rising wave of identity politics, hoping that movements by blacks, women, Latinos, and others constituted a wave that would permanently reconfigure the political structure of the country.

Given short shrift for decades by organized labour, these identity groups had throughout the 1960s begun to organise on their own account.

For two decades, the Democratic Party was content to hold the view that a successful coalition could be knit together between these movements and the party’s traditional base in organised labour. The so-called “Reagan revolution” of 1980 put paid to this view.

The Democrats complacently allowed economic conditions in the United States in the 1970s and 1980s to be constructed in the national imagination as a zero-sum game in which gains for women and minorities could only be achieved through the diminution of the prospects of white males.

The story of American politics since the 1980s has been one of concession by the Democrats to their Republican opponents.

Some on the left, particularly older members of the labour movement, are wont to try to scapegoat women, minorities, and other marginalised groups for having upset the apple cart.

Their overweening demands, so the argument still all too often goes, pushed the party too far left, destroying the slow and steady progress that had been making toward greater social justice.

But this sort of Whig history manqué cynically discounts the fact that the Democratic Party was for decades quite happy to base its electoral fortunes on the systematic exclusion of women and minorities from equitable participation in economic and political life.

The real fault lies with the party itself, which utterly failed to integrate the wholly justified (and long-deferred) demands of marginalised groups.

The Democratic Party did, at points, recognise that racism, sexism, and xenophobia were bad. They simply didn’t manage to convince a large number of people that this was the case.

The Republicans have been in control of the presidency ever since, with two notable exceptions.

One was the presidency of Bill Clinton, whose success was predicated on a wholesale expropriation of the policies of moderate Republicanism.

Clinton’s compassionate conservatism, clothed in Democratic rhetoric and a pleasing southern twang, fit the first tech wave, the crest of which he rode to two terms in the White House.

The second interlude was that of Barack Obama, whose path to the presidency was much-smoothed by George W. Bush’s ineptness when the financial crisis of 2007-8 broke out.

In the wake of that collapse, anything put forward by the Democratic Party would have had a chance of winning. But the differences between that crisis and the current one are instructive.

The 2007-8 meltdown happened at a time when crisis was less thoroughly inscribed in the national consciousness. 9/11 had been a shock, but it was the kind of event for which the normal coping strategies of waving the flag and making things (and people) explode seemed apposite.

The financial crisis struck at the fundaments of American security, threatening to wipe out home values and retirement accounts, the two pillars on which the psyche of the US middle class rests.

COVID-19 is a different matter. In the first place, it is occurring at a later period in the crisis consciousness of the nation. It has, as Trump and his associates have exploited, a crudely attributable origin (“it’s the fault of the Chinese”) whereas the financial crisis was an outgrowth of a system of free-market capitalism supposedly ideal for human flourishing.

In another time, the failure of the White House to take even the most basic ameliorative measures, with more than 200,000 fatalities, would have been catastrophic for a sitting president.

But, today’s political right blunted that, changing the conversation from government responsibility for mass deaths to a leftwing conspiracy about taking away personal freedoms.

At the same time, the economy has continued to function due to the technological availability of remote work for upper and middle classes, and the slave-like compulsion of service workers to risk death in order to keep the whole thing running.

The modern Republican Party comprises two main parts. The party core is a hyper-wealthy fraction of post-industrial and finance capital. The ideology that this group puts forward is one of devotion to the free market at all costs, even over democratic institutions.

Its secret history might be seen in a line written in an op-ed in the Wall Street Journal shortly after the collapse of communism in 1990 by the economist (and Mont Pelerin Society president) James Buchanan:

“There will be no escape from the protectionist-mercantilist regime that now threatens in both Western and eastern countries so long as we allow the ordinary or natural outcomes of majoritarian democratic processes to operate without adequate constitutional constraints.”

But this free-market essentialism is really only meant for public consumption. The real policy, and one from which Team Trump has benefited richly, is a corporate socialism in which ever-increasing pools of capital are concentrated at the top of the income distribution and prevented collegially from leaking out to the lower orders.

At the lower end, there are lower- and middle-class white males, many of whom are either veterans of the Reagan Democratic wave or their progeny.

The ideology of these factions has been powerfully shaped by the policy of the Republican Party of substituting class consciousness with racial paranoia and status anxiety.

Politically, they remain locked into the spectacle of Trump as great white male hope, shouting down his opponents and getting things done (whatever that might mean in practice).

There is a view, particularly common on the left-wing of the Democratic Party, and among the progressive left more generally, that the Democrats erred in selecting Biden.

His candidacy, so the argument goes, was a matter of serving up leftovers from a meal that people didn’t like the first time around.

It is probably fairer to say that the grief to which the party has come this time around resulted from that error common to military establishments: the attempt to refight the last war.

Biden might have been successful in 2016. But this is 2020 and the chains that bind together the hard-right core of  President Trump with more moderate suburban whites have now become a steel-hard casing.

Irrespective of how things shake out in the next few days (or weeks), there is every reason to believe that things in the United States will continue as they have done for the last four years.

Even if the Republicans do not retain both the presidency and control of the Senate, irreparable damage will continue to be done both to the republic and to the environment.

Immediate blame must rest with Donald Trump and the pack of zealots and enablers that surrounds him.

But let it not be forgotten that a measure of blame must go to the Democrats, who have once again failed to espouse a utopia that people want.

Until this changes, the course of American politics will remain the same.

Four days before Mussolini’s ghost came back, a friend and I raced through the high-walled alleys of Venice in dazzling afternoon sunshine. END_OF_DOCUMENT_TOKEN_TO_BE_REPLACED

Above the entrance of Bracken House, sits the face of Winston Churchill, set in a gold sunburst on an astrological clock. END_OF_DOCUMENT_TOKEN_TO_BE_REPLACED