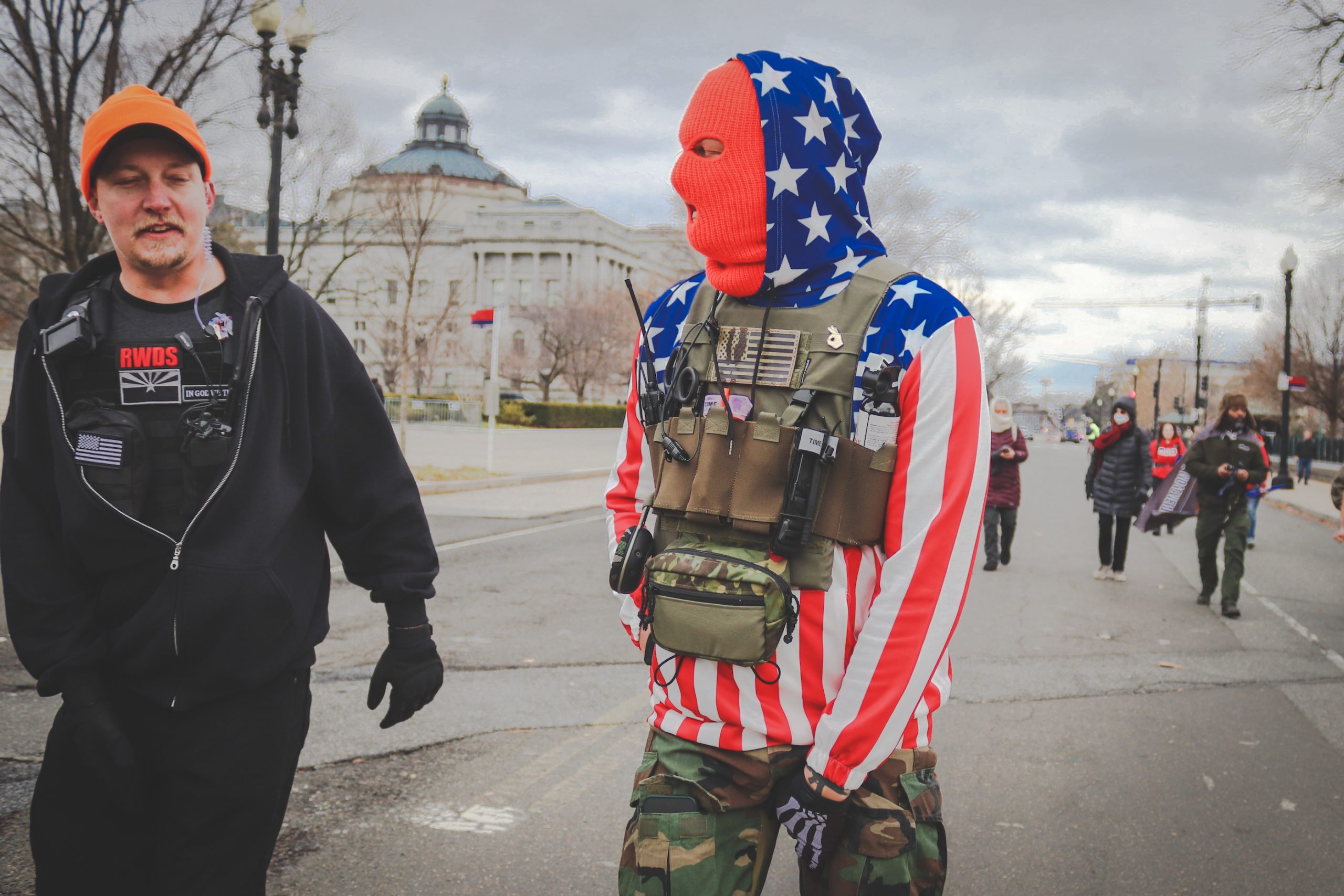 A veteran of America’s wars in Afghanistan and Iraq, Babbitt was a passionate supporter of President Trump and a convinced believer in the QAnon conspiracy theory.

The USAF vet had travelled from her home in San Diego to take part in what she believed would be “the storm”, the moment when Trump’s supporters would rise up and take back control of the government from the cabal of wealthy, deep state Satanists and paedophiles that now control it.

Many will place the blame for Ashli Babbitt’s death on her own shoulders. No one forced her to drive to DC, charge up the Capitol steps and to try to force her way into a federal building filled with heavily armed security forces. All of these things are true.

And yet, Babbitt’s death is a microcosm of the crisis facing the United States. This is, we are often told, the era of post-truth and alternative facts. In the US, the rise of Donald Trump has cast these phenomena in particularly stark relief.

In a nuclear-armed power in control of the world’s reserve currency, the widespread disconnection from reality, both in the population at large and in the right-leaning segments of the media and the political establishment should be a matter of global concern.

Babbitt’s death, and the white nationalist riot in which it occurred, were easily foreseeable consequences of a pattern of incitement and mendacious assaults on the integrity of America’s democratic institutions, led by its head of state.

The mob action that occurred was, in fact, so easily predictable (people made t-shirts advertising it beforehand) that the only real question is why the Capitol Police were so clearly caught off guard when it finally happened. Were they really that stupid, or had they colluded with Trump?

In the lead up to the Congressional certification of Biden’s victory in the November general election, there had been a surfeit of loose talk among supporters of President Trump retailing claims that the outcome had been the result of massive voter fraud.

That not a shred of actual evidence has ever been adduced to prove this is a perfect illustration of the politics involved. The defining feature of the filings in various courts on behalf of Trump was that the claims of massive manipulation were almost entirely absent.

Given that the president’s various factotums were giving out that he had actually won in a landslide, the number of votes would have had to be on the order of 14 million (the 7 million by which Biden actually won plus an equal number to fulfil the “landslide” part of the equation).

A list of stipulations made by Trump’s attorneys in a filing in Bucks County, Pennsylvania conceded the following:

“Petitioners do not allege, and there is no evidence of, any fraud in connection with the challenged ballots

Petitioners do not allege, and there is no evidence of, any misconduct in connection with the challenged ballots.

Petitioners do not allege, and there is no evidence of, any impropriety in connection with the challenged ballots.

Petitioners do not allege, and there is no evidence of, any undue influence committed with respect to the challenged ballots.”

In another case, in Antrim County, Michigan, the judge dismissed claims that the voting results had been altered with the comment that they amounted to, “an amalgamation of theories, conjecture, and speculation that such alterations were possible”.

As numerous commentators noted at the time, there was a serious disconnect between the public claims being put forward by Donald Trump, his attorney, Rudolf Giuliani and those being offered under conditions of judicial scrutiny.

The problems with the filings on behalf the Trump campaign, the lack of evidence, the lack of standing, the lack of any sense of proportion, would have been catastrophic if the point had actually been to obtain relief from the courts.

As their absurdity makes clear, the actual point of the exercise was solidifying a narrative of victimisation among Trump’s supporters in order to soak them for donations and create the preconditions for some sort of nullification of the national vote.

And so it came to pass in the streets of Washington DC that hundreds of the president’s supporters gathered as they had long been preparing to do with the intent of rejigging the institutions of the republic.

They were ginned up by the president himself, who emerged from the White House to deliver a peroration in which he told his audience that the Democratic victories had resulted from “explosions of bullshit” and exhorted them to head to the Capitol.

There was a grim and bloody-minded tone to the whole affair. Trump supporters erected a gallows, complete with noose, in front of the Capitol steps. There was plenty of chatter on social media in which Trump boosters, as they had done for weeks, offered overt threats of violence.

In the face of this, the Capitol Police seemed oddly unconcerned.

Unlike their aggressive posture for the Black Lives Matter demonstration in June, when officers in full riot gear lined the Lincoln Memorial, the prospect that a baying pack of Nazis might attempt to disrupt Congress carrying out the functions of the republic seems to have escaped official notice.

The possibility that the different skin tones of the respective groups of demonstrators might have had something to do with the difference in responses did not go unnoticed.

When the mob, including Ashli Babbitt, surged up the steps and into the Capitol itself, they met little resistance. They numbered among their leaders a bare-chested “QAnon shaman” replete with face paint, wearing a fur helmet with buffalo horns affixed to it.

Viewed at a distance, this gave the affair a somewhat comical, albeit Situationist twist. But what was going on was deadly serious, as the evacuation of the assembled members of Congress, the fatal shooting of Babbitt, and the killing of a police officer, made clear. (As of the time of this article’s publication, five people are reported to have died during the Capitol Riot.)

One might well ask where exactly this leaves American democracy. The election of Joe Biden was finally confirmed at 4 AM on Thursday, a foregone conclusion in any event but with rather fewer Republicans signing on to the case for refusal.

Texas Senator Ted Cruz reliably reprised his role as a supporter of a president who had accused his father of involvement in the Kennedy assassination. Florida Senator Matt Gaetz claimed “Antifa” was responsible, not Trump.

Still, prominent Congressmen found time to denounce the demonstrators and the president.

Erstwhile Senate Majority Leader, Kentucky Mitch McConnell spoke of the “doom spiral” in which American democracy was now caught. North Carolina Republican Lindsay Graham, one of the more slavish Trump acolytes, said that he was finally “done” with the president.

Given that Donald Trump’s term has barely two weeks to run (assuming he isn’t impeached or declared unfit under the 25th Amendment), such assertions lack gravity.

From centre-left to centre-right (whatever is left of the latter), commentators were quick to pile on to the president’s cynical courting of QAnon supporters and other conspiracy buffs as elements of his dysfunctional relationship with the truth.

But the roots of this particular syndrome go much further back than the advent of Trumpism and, contrary to another popular narrative, cannot be laid at the door of philosophers such as Jacques Derrida or other post-modernists.

Since the Cold War, American conservatism has been built on systematic diversion from ascertainable facts, when those facts did not fit into, or add up to, a pleasing political narrative.

As I have explained in previous Battleground articles, beginning with the so-called “Southern strategy” in the 1950s, the Republican Party sought to convince poor and middle-class whites that the dangers posed by civil rights and communism either threatened or trumped their immediate material concerns.

Throughout the 1980s, the Reagan and Bush Administrations added to this the proposition that trickle-down economics could be the basis for broad-based prosperity.

At the same time, American conservatives propounded the view that tax cuts plus massive increases in defence spending somehow did not add up to massive budget deficits, necessitating wholesale cuts in social programs.

On more than one occasion, the Democrats have been all too happy to play along.

The run-up to the first Gulf War, in 1990, was a particularly egregious example, with both sides grossly inflating the threat posed by Saddam Hussein in order to promote a conflict from which they assumed the country (and their political fortunes) would ultimately benefit.

Perhaps the worst of the political fictions was the idea that neoliberal globalisation was certain to have positive effects on the situation of workers in the United States.

The results have been the wholesale destruction of manufacturing capacity, and of the stable jobs and ways of life that accompanied them.

This particular disconnect has been particularly important in the creation of the conspiracist populism which President Trump so effectively tapped into.

Faced with assertions by figures in both major parties that free trade lifted all boats, Americans experienced a cognitive dissonance born of closed factories, precarious employment and shrinking benefits.

Under such circumstances, it’s not surprising that many looked outside the mainstream for narratives that made them the hero.

While the rise of the neo-Evangelical QAnon cannot be attributed in its entirety to this dynamic, it created a scepticism toward the political mainstream that allowed it to thrive.

For example, according to a recent NPR/Ipsos poll, approximately 54% of Americans think that it is at least possible that the country is run by Satanists who sell babies into sex slavery.

In light of this, it is hardly surprising that even some otherwise sensible people have given some credence to it.

The Republican Party, ever alive to the prospect of political advantage, has been unwilling to disavow this idea or to make such disavowal a litmus test for standing for election under their banner.

When asked about QAnon, Donald Trump offered the following: “Let me just tell you what I do hear about it is they are very strongly against paedophilia and I agree with that.”

Given that Trump built his far-right following on how he says things rather than what he says, it is hardly surprising that the specious logic underlying this statement was lost on his supporters.

It is one thing to think that lizard men in human guise running the country would be a bad thing, but quite another to believe that such a thing is an actual threat.

One might hardly need to make this point were it not for the fact that Anthony Quinn Warner, who unleashed a suicide bomb attack on the AT&T network hub in downtown Nashville on Christmas Day, apparently believed just that.

In social media, such ideas are legion. That they can be channelled to the political mainstream by the Republican Party constitutes a grave challenge to American democracy.

Ashli Babbitt died in the cause of the same kind of foolishness. She died needlessly and, it must be said, foolishly. She died because she made a kind of mistake that seldom costs white people their lives, although the experience of people of colour is different.

Ultimately, Babbitt’s life was sacrificed on the altar of the hypocrisy and mendacity of Donald Trump and his enablers.

Certainly, they will disclaim responsibility for her death. But the long-serving soldier was impelled toward her end by a pattern of self-servicing lies masquerading as a political program.

How many others will be sacrificed before this idolatry is extinguished? The next four years in American politics look to be extremely bloody.

Brexit will turn three on the last day of January, over six years since the 2016 referendum kickstarted Britain’s race to the bottom. END_OF_DOCUMENT_TOKEN_TO_BE_REPLACED

Be careful what you wish for. It may be a cliché, but it’s one the Greens are learning all over again. END_OF_DOCUMENT_TOKEN_TO_BE_REPLACED

Before his arrest, Andrew Tate was just another influencer with bad politics. END_OF_DOCUMENT_TOKEN_TO_BE_REPLACED