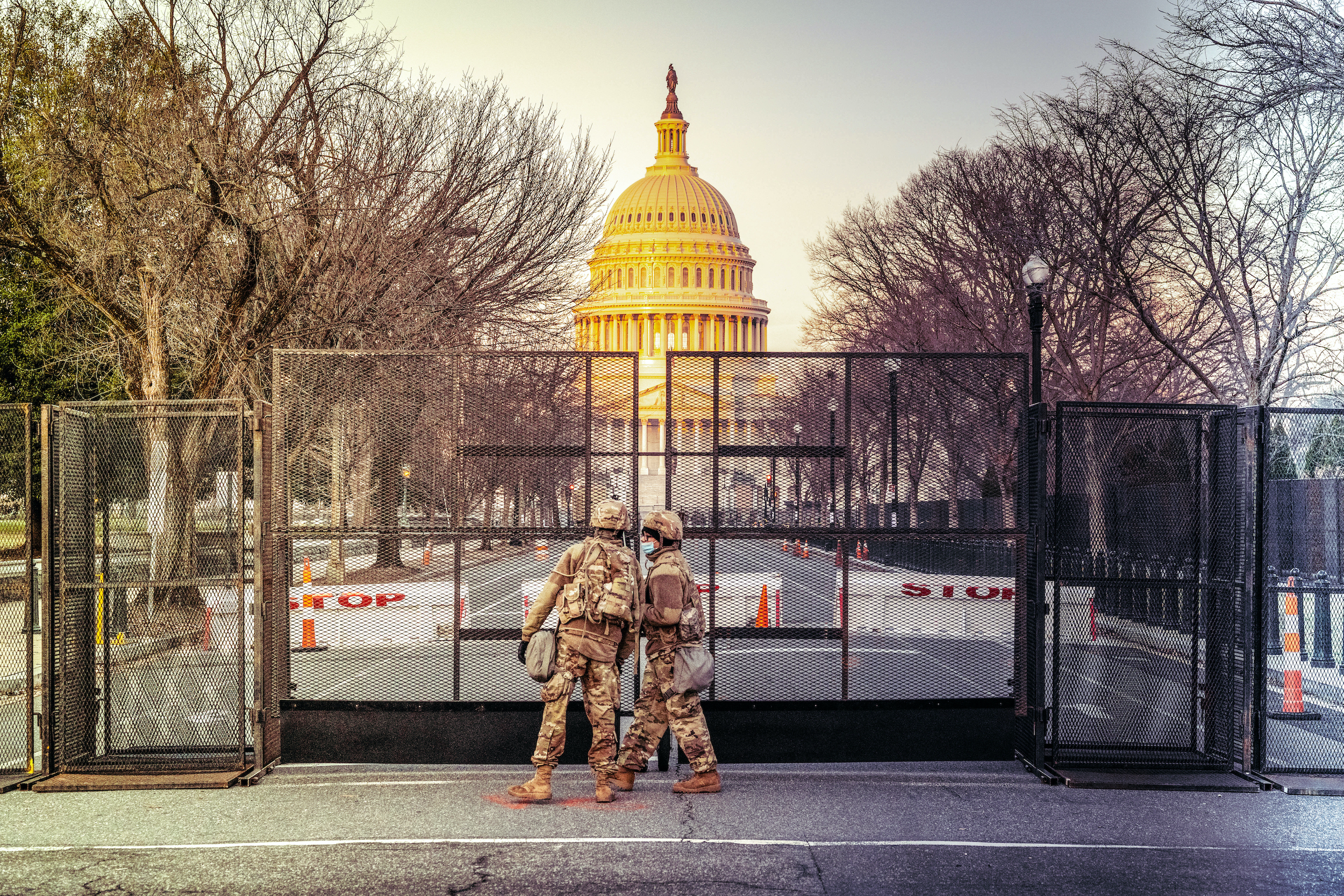 Replete with religious narratives about the triumph of light over darkness, the ceremony was also a middle finger to white nationalists, with its heavy African American presence and antiracist rhetoric.

Perhaps the most notable line of the day was uttered by White House Press Secretary Jen Psaki at the end of the first briefing of her tenure.

Having run through the highlights of the executive orders that President Biden had signed in his first hours in office, Psaki ended the session by saying, “Let’s do this again tomorrow.”

That might not seem like much. But against the backdrop of the last four years, the effect was startling.

The Trump Administration’s relations with the press started with Sean Spicer yelling at the press corps for failing to accept the president’s claim that his inauguration was the biggest ever. He then left without taking questions.

Two days later on Meet the Press, the redoubtable Kellyanne Conway coined the phrase “alternative facts,” and relations between the Trump Administration and the media started out fraught and moved south from there.

Trump could never seem to get ahead of any news cycle in the course of four years. Alienating the White House press corps didn’t cause this, but it went a long way to making a bad situation worse.

Psaki, a former State Department spokesperson and press aide to John Kerry evinced a professionalism that contrasted markedly from the likes of Sarah Huckabee Sanders and Kayleigh McEnany, who sparred and bumbled through their encounters with the press, and Stephanie Grisham, who literally never showed up.

Setting out her vision for the relationship between the White House Press Office and the press corps, Psaki said, “There will be moments when we disagree, and there will certainly be days where we disagree for extensive parts of the briefing even, perhaps. But we have a common goal, which is sharing accurate information with the American people.”

For an incoming administration facing some of the most profound challenges in the history of the United States, the commitments to mutual respect and fact-based discourse were the right notes to strike.

It had been a remarkable day in other respects. Although Donald Trump had been wrong that his inauguration had been bigger than that of Barack Obama, he could claim that it was easily larger than Biden’s ceremony.

A week to the day after the QAnon mob had barged its way into the Capitol, downtown Washington DC was made of fences, barbed wire, and checkpoints manned by National Guardsmen (hopefully) vetted for associations with the far-right.

The ceremony itself was limited to a few hundred dignitaries. Lady Gaga sang the national anthem, followed by Jennifer Lopez singing a medley of patriotic songs. In the middle of her performance, Lopez uttered the final lines of the Pledge of Allegiance in Spanish.

This is the first time that Spanish has been spoken at a presidential inauguration. Only minutes later, Biden, having taken the oath of office, actually uttered the phrase “systemic racism” during his inaugural address, resulting in no surprise whatsoever among the assembled crowd.

Of course, the most important first of the day occurred when Kamala Harris was sworn in as Vice President, heretofore undiscovered territory for both women and people of colour. This is one of the many features of the Biden inauguration that was both important but not fundamental.

Harris’ accession to the second-highest office in the land was an earnest gesture to women and non-whites that the promise of equality enshrined in the Declaration of Independence is now to be taken rather more seriously than it had been in the past.

At the same time, it is worth noting that, for all the relief felt by the majority of Americans, what was being celebrated was a return to the status quo ante.

The institutions of the republic remain very much what they were, even after four years of the malign attentions of Donald Trump.

The latter slunk out of town early, becoming the first president since Nixon to skip his successor’s inauguration, and for many of the same reasons.

Nixon had departed Washington two and a half years before Jimmy Carter’s inauguration in January 1977, having been impeached for his role in covering up the Watergate break-in.

Trump, breaker of records, still faces an unprecedented second impeachment, to go along with a host of other legal jeopardies in various jurisdictions.

The last days of his administration had many of the same qualities of a ship run aground on a shoal, with predictable results in terms of the conduct of its rodent population.

The grotesque mob action of the Capitol Riot gave anyone who wanted it as much political cover as they might require to throw off their shackles and declare independence.

Betsy DeVos called time on her attempts to use the office of Secretary of Education to destroy public education and resigned.

Vice President Mike Pence, who may or may not have been instrumental in finally getting the National Guard mobilised on the day of the Capitol Riot, chose to skip Trump’s going away party.

Pence did attend the inauguration, as if to fly the flag of the pre-Trump Republican party which, like the party’s credibility, is now in tatters. Others remained true to the Trump cause.

Republican Josh Hawley, fresh from continuing his insistence that Joe Biden’s victory was illegitimate even after QAnon had invaded the Capitol building, doubled down by refusing to approve the appointment of Alejandro Mayorkas to lead the Department of Homeland Security.

Having already lost a book deal and the support of the guy who bankrolled his campaign, Missouri Senator Hawley might have been expected to see that the times had changed.

Further down the food chain, one finds the likes of Representatives Marjorie Taylor Green and Lauren Boebert.

The former, a QAnon supporter and notorious firebrand of the far-right, had her Twitter account temporarily suspended for retailing baseless and grossly inflammatory claims about the Georgia senate elections.

The latter, a fanatical proponent of gun rights, refused to go through the newly installed metal detectors in the Capitol, while continuing to insist on a reality in which President Trump didn’t lose the election by more than 7 million votes.

The gun-rights bit is not innocent. Boebert’s Tweeting of House Speaker Nancy Pelosi’s location during the Capitol Riot underlined her willingness to support violence against other politicians.

To a greater extent than at any point since the Second World War, Wednesday’s inauguration was a ringing of the changes.

Gone was the startling mendacity and unrepentant salaciousness of the Trump Administration. In its place were Biden and his crowd, saying the right things about discrimination and injustice, promising to run the government on the basis of facts and civility.

But one might also be forgiven for noticing how little has changed in terms of the fundamentals of American government.

Certainly, the levels of dishonesty and corruption that Trump and his associates brought to the White House were qualitatively higher than any since the 1920s.

The reckless pursuit of the Evangelical right’s agenda was particularly jarring, because Donald Trump’s only religion is narcissism. Belief in the value of anything not himself is wholly alien to his way of thinking.

What isn’t surprising is that Trump packed the Supreme Court with far-right justices like Amy Coney Barrett and Brett Kavanaugh. But that was always in the cards. Just look at previous GOP appointees like paleoconservative Antonin Scalia, or rank incompetents like Clarence Thomas.

The shameless gerrymandering of seats for federal and state legislatures is nothing new, either. These will just be slower now that Donald Trump’s unapologetic xenophobia is no longer spilling out of official Twitter accounts on a daily basis.

African Americans died disproportionately at the hands of police before Trump. There is every reason to believe that this will continue under Biden. The president-elect’s nod to systemic racism was welcome. But it will take a lot more to effect actual change.

Internationally, it was heartening to see Chief Medical Advisor Dr Anthony Fauci announce that plans for the United States to leave the WHO were being shelved. Likewise, the Biden Administration has made it clear that it is going to rejoin the Paris Climate accords.

However, the problems facing the US in the Middle East remain complex. It’s hard to see the new administration deviating too far from Saudi Arab’s King Abdullah and Israeli Prime Minister Netanyahu, both of whom were flagrantly indulged by the Trump Administration.

Biden will likely continue America’s drone war against the Taliban and ISIS, which President Trump expanded during his tenure, more than doubling the number of regional strikes launched during the Obama Administration. Qassem Soleimani was the best-known target.

Still, progressives will likely get more joy than they did from Obama, who was not all that far to the left of Ronald Reagan. But the US is the political equivalent of an up-armoured Humvee, and one can’t simply turn it into a hippy bus by changing who is in the driver’s seat.

It’s the end of the beginning of a struggle against a right-wing attempt to create a white, imperial megastate. That’s the main ideological import of Donald Trump’s tenure, and what the QAnon Christians of the Capitol Riot hoped they could secure on 6 January.

While the Democrats’ emphasis on multiculturalism is indeed laudatory, it’s hard to imagine Biden finding a way to stem the growth of white nationalism. From shutting down broadcasters like Fox News to purging the country’s police forces, the scale of the challenge is beyond his remit.

COVID still has years to run. The economy will not turn around overnight, and one can already hear warnings from the right that the federal deficit precludes helping the unemployed with government money. No, the nightmare is not over. But for a moment, we can enjoy the reprieve.

Brexit will turn three on the last day of January, over six years since the 2016 referendum kickstarted Britain’s race to the bottom. END_OF_DOCUMENT_TOKEN_TO_BE_REPLACED

Be careful what you wish for. It may be a cliché, but it’s one the Greens are learning all over again. END_OF_DOCUMENT_TOKEN_TO_BE_REPLACED

Before his arrest, Andrew Tate was just another influencer with bad politics. END_OF_DOCUMENT_TOKEN_TO_BE_REPLACED