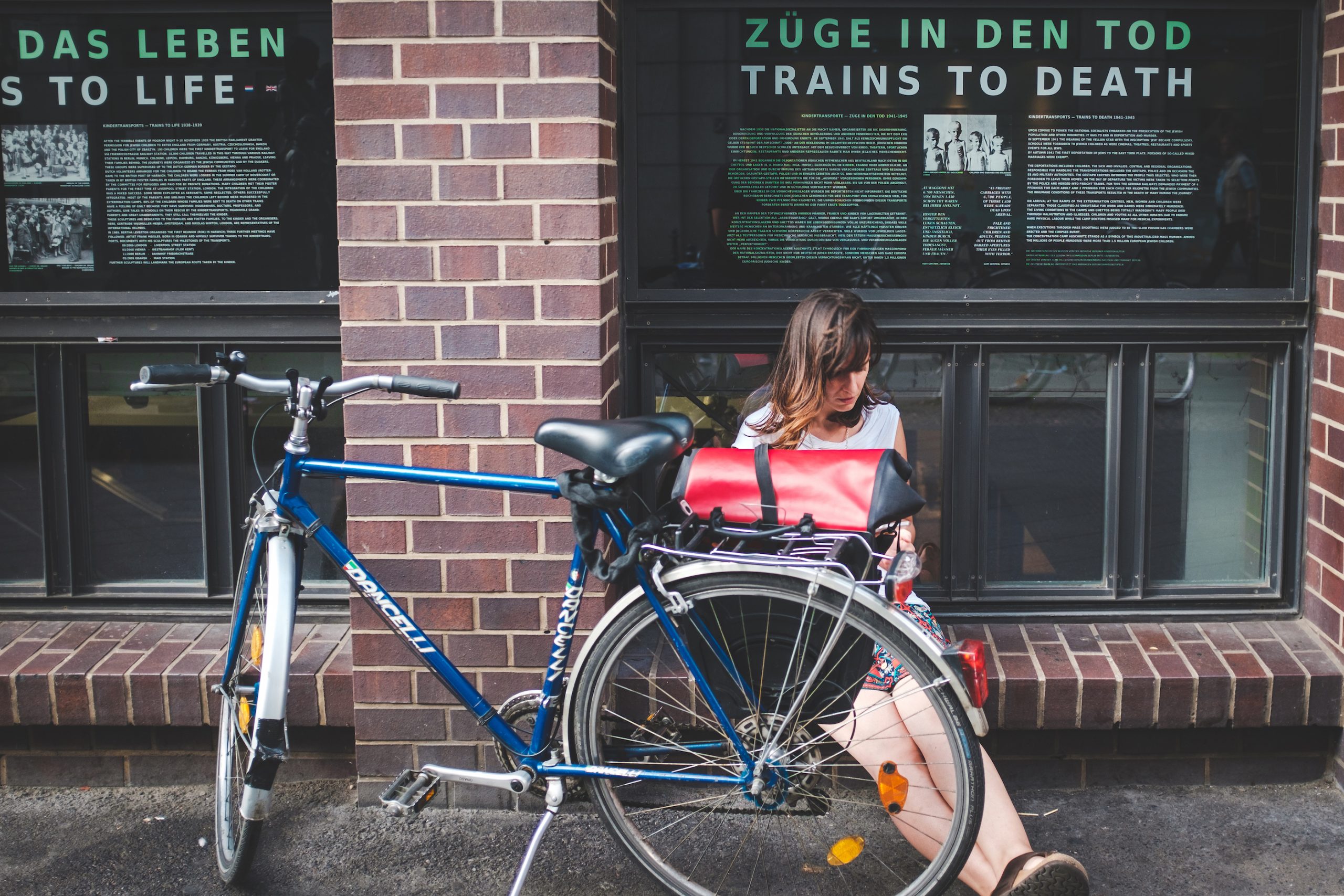 “With the radical conservatives and the radical left missing from the intellectual horizon, the vocabulary of the post-war years was decisively unpolitical and heavily weighted toward moral and theological concepts,” Rabinbach wrote.

“Four keywords appear with astonishing regularity in all the intellectual reviews founded in the Western zones in immediate post-war Germany,” Rabinbach added. “Those words are ‘guilt,’ ‘spirit,’ ‘Europe,’ and ‘humanism.’”

What ties these terms together was the task that confronted Germans in the wake of twelve years of Nazi barbarism: the readmission of Germany into that club of peoples and nations viewed as “civilised”. They set out a structure of parts and wholes, connected by an underlying universalistic logic.

Humanism functions as a more or less overt claim to modes of life optimal for human flourishing. Civilisation is the European expression of this way of being, grounded in universal truths which apply to all human beings, without exception.

As a term, ‘civilisation’ is so freighted with negative historical baggage that only the most unflinching apologists for the ancient régime will use it in a non-ironic sense. Its use always says more about who is employing it than the world it’s supposed to describe.

Ultimately, and mostly through the efforts of its promoters rather than its detractors, civilisation has become the sort of club in which membership is increasingly under threat.

In the years following the Second World War, the victorious Allies and their various client states were looking for ways to reinvigorate the civilised world at a time when the values that defined such a condition were seen to have reached a low ebb.

In Ruin and Renewal: Civilizing Europe after World War II , Paul Betts attempts to trace the history of the fraught and unstable process through various modes.

From the work of the United Nations to address the humanitarian crises of the post-war period, and the judicial proceedings against perpetrators of “crimes against humanity”, to the reconstruction of its cultural life, Cold War Europe was central to the recovery of values viewed as fundamental to decent human existence.

Betts, a historian at St. Antony’s College, Oxford, who numbers among his earlier works a fascinating history of industrial design in West Germany and a seminal essay on Nazi modernism has produced a well-researched and thoroughly readable history of his topic.

A history of the role played by concepts of civilisation, even regionally and temporally constrained as Ruin and Renewal is, constitutes a massive undertaking.

Although necessarily broad rather than particularly deep, Betts provides a panoramic view of the struggles over questions of civilisation and re-civilisation after World War Two.

Various projects, some of them bureaucratic and institutional, some cultural and intellectual, operated in ways that overlapped, sometimes synergistically, other times at cross purposes.

All of them were subject to the influence of the Cold War divide, which became increasingly profound after 1946, and then accelerated further with the formal division of Germany in 1949.

On the surface, the issue at hand in the latter half of the 1940s might have seemed clear-cut.

The horrific policies of the fascist regimes (including Japan, although “fascism” is not an entirely felicitous term in this regard) were documented in painstaking detail. They had been put forward for all to see at the Nuremberg trials and elsewhere to establish the guilt of these regimes.

Yet one did not have to dig very far beneath the surface to find complications for this narrative.

In some cases, this was done by the participants, as when the US government made more or less explicit reference to Soviet atrocities, such as the massacre at Katyn of more than 20,000 Polish soldiers and intellectuals by the NKVD.

That this was made an issue was clear evidence of the intrusion of Cold War considerations on the conditions of amity that had prevailed, at least in relative terms, among the Allies during World War II.

But even as early as 1943, the US government had begun to look beyond the end of the war in Europe to a situation in which the primary enemy would be the Soviet Union as the avatar of international communism.

For those on the Anglo-American side of the line, by contrast, standards were different in practice. While the brutalities of Stalinism, such as the purges or the lethal famine in Ukraine in the early 1930s, were fair game, the vicissitudes of the British Empire were not.

Thus, the gruesome Bengal famine of 1943, which claimed between 2 and 3 million lives and which was aggravated by preferential food distribution and constraints on internal trade by the British government, was simply written off as an unavoidable consequence of the war, when it was discussed at all.

At a deeper level, one dealt with at reasonable but not exhaustive length by Betts, questions of civilisation mapped, as they had done before the war, onto divisions between colonised areas and the colonial metropole.

Betts cites the right-wing German jurist Carl Schmitt’s 1950 text The Nomos of the Earth to the effect that the universalistic concepts of law and morals had traditionally been limited to Europe.

The arrival of the United States on the scene, with its notional commitment to all-encompassing universalism, had fundamentally transformed the international order.

Universalism was at the centre of the cultural politics of this period. This can be seen in the prominence, alluded to in the quote from Rabinbach above, of concepts of humanism in Cold War conflicts, especially in Germany.

In the West, writers such as Thomas Mann and Friedrich Meinecke promoted reconstituted concepts of the human as a means to lift Germans (and Europeans) out of the depths of moral degradation to which they had sunk. Meinecke went as far as to suggest Goethe communities as the basis for cultural and moral regeneration.

East of the Cold War divide, the government of the Soviet zone formed the Kulturbund zur demokratischen Erneuerung Deutschlands (Cultural Federation for the Democratic Renewal of Germany), an organisation dedicated to promoting awareness of, and engagement with, the works of figures of classical German humanism such as Goethe, Schiller, and Lessing.

Performances of Lessing’s paean to religious toleration Nathan der Weise were particularly favoured as a means of bolstering the claims of German communists that their system was optimal for human thriving.

In decolonising Africa, Cold War competition was also carried out under the sign of civilisation, and exactly what that meant was powerfully influenced by capitalists and communists.

Africans were not unfamiliar with the discourse of civilisation, having lived for a century or more with France’s mission civilizatrice.

Few in Francophone Africa could have had any illusions about the actual nature of the French colonial project. The best that could be said about it was that it was less openly genocidal than that pursued by Belgium in the Congo.

In practice, France’s civilizing mission (like European colonialism generally) was undertaken for the benefit of white Europeans, with the fruits of “civilisation” for the colonised peoples deferred to some point in the indeterminate future.

European states were loath to give up their colonial empires, even in the name of civilisation. In the words of one British Labour Party official, the danger of decolonisation would be “like giving a child of ten a latch-key, a bank account, and a shotgun”.

In the Russian-dominated East, by contrast, the project of extending economic development was crucial to the spread of civilisation, as the two were closely entwined.

Neither the Soviet Union nor its satellites had official colonial possessions. What they did have was, at least on paper, a project of liberation and a political system that would promote human flourishing in ways that colonial capitalism had never managed to do.

Leaders and activists in what, at the time, was often referred to as the Third World (i.e. belonging to neither the communist nor the liberal capitalist orbit) were justifiably leery of becoming enmeshed in the burgeoning superpower competition.

The 1955 Afro-Asian Conference at Bandung and the formation of the Non-Aligned Movement in 1961 gave clear indications of impulses toward a sort of auto-generated civilisation in the decolonising world.

One of the central themes of Betts’s book, and the one that ties it most closely to the current moment, is the constant anxiety that civilisation is on the verge of collapse. It is an idea with a long provenance reaching back to classical antiquity, but persisting in the 20th century with decidedly political overtones.

Writing in 1897, the German classicist Ulrich von Wilamowitz-Möllendorf warned that,

“The world has experienced that things do not always go up, that what seems to be the inalienable gain of human labour can also be lost. Culture can die because it has died at least once. The jackal howls in Ephesus, where Heraclitus and Paul preached; In the marble halls of a hundred cities in Asia Minor the thorns proliferate and only a few stunted barbarians crouch; Desert sand swirls over the garden of the gods Cyrenes.”

In fact, Wilamowitz-Möllendorf was as much concerned with the prospects of proletarian degradation of modern culture as with the civilisations of the Near East.

This imbrication of politics with broader issues of culture, amounting to the attempt to camouflage immediate political concerns by clothing them in civilisational costumes was a frequently used tactic, especially (and for obvious reasons) by conservatives.

But not only by them. The decades since the Second World War have seen the growth of a narrative of barbarians at the gates, from the lean communist hordes of Russia and its allies, to the radical social movements of the 1960s and 1970s, to radical Islamists since 2001.

All of these threats have been decried by both liberals and conservatives.

Civilisation has reached a peculiar impasse in Europe today. On the one hand, the question of immigration has been weaponised by a national populism that has, in practically every case, nominated itself as the defender of civilisation (or European culture which invariably amounts to the same thing).

The German PEGIDA (Patriotische Europäer gegen die Islamisierung des Abendlandes or Patriotic Europeans against the Islamization of the West) is only one of the most forthright in making this claim, but its name is emblematic of nationalist politics in Europe more generally.

That said, even liberals and socialists have been guilty of pearl-clutching in the face of the “threat” from immigration.

The idea that the civilisation of Europe might be diluted by “outsiders” is one that, as Betts notes, tends to cut across political lines, with effects that are destructive for democratic institutions.

That one of its founders, Sahra Wagenknecht, is half-Iranian makes it that much more complicated.

The values of universalism and multiculturalism, which had once been characteristic of the project of rebuilding European civilisation, have in many parts of Europe now give over to the overt chauvinism of national populist parties, and Identitarian politics.

Ruin and Renewal is intended as a general history, and its narrative is rather coarse-grained at times. It has the considerable virtue of interrogating ideas about civilisation whose validity were frequently taken for granted during the Cold War. and after.

In telling this history, Ruin and Renewal is a reminder that civilisation is never objective, and always implies that we are civilised while others are not. This is the story of European politics.

The 1970s was a decade of broken dreams. The end of the postwar boom brought to a close the era of middle-class liberalism in Europe and North America. END_OF_DOCUMENT_TOKEN_TO_BE_REPLACED

Serbian director Dušan Makavejev’s 1968 film Innocence Unprotected manages both to explore the legacy of wartime trauma seriously and to make fun of itself in the process.  END_OF_DOCUMENT_TOKEN_TO_BE_REPLACED