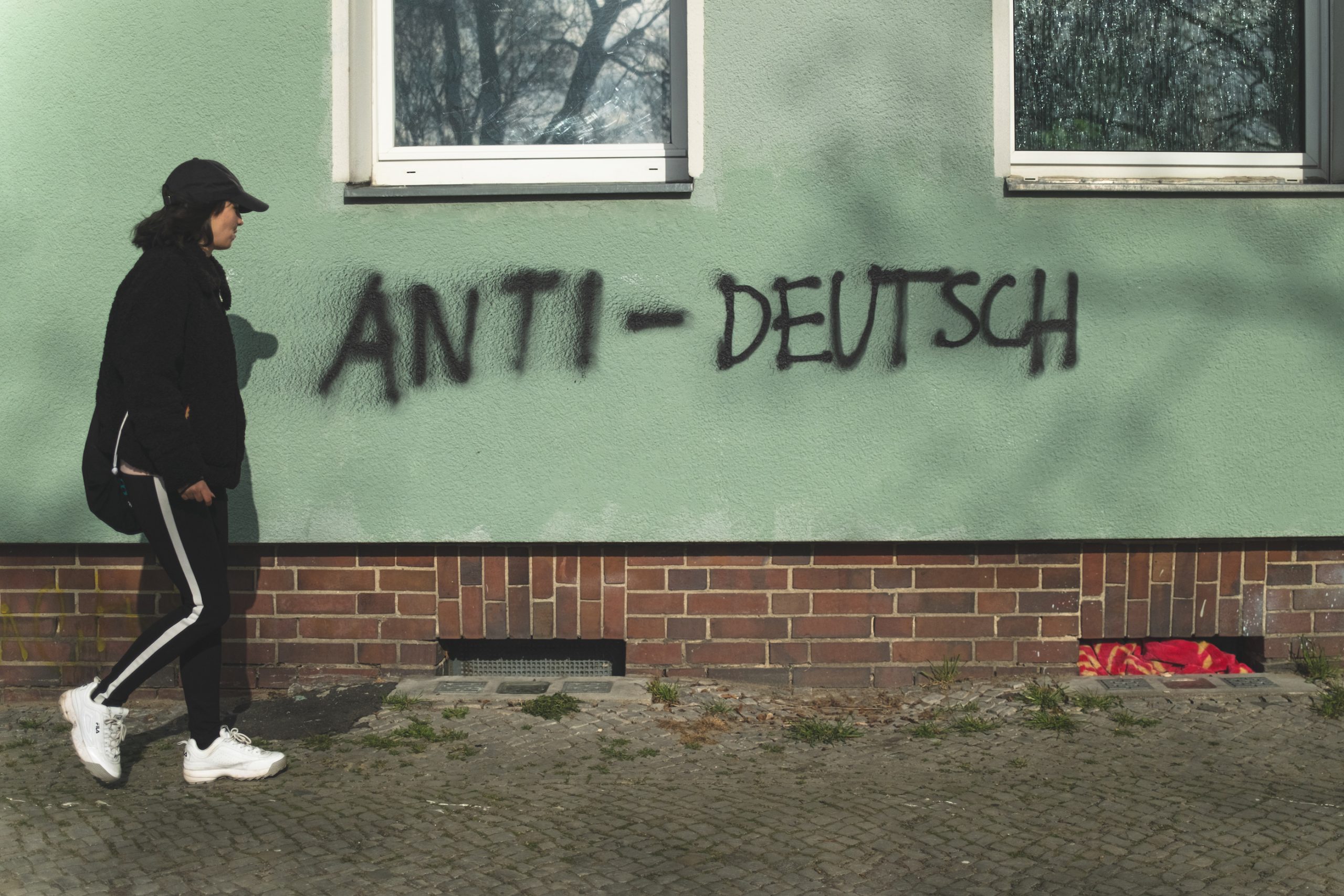 The racism is not as blatant, but it’s there. Israeli immigrants, in particular, find themselves sensitive to it when the conflict with the Palestinians arises. They often find themselves sympathised with a little too much, as though they are victims, who have no role in the crisis.

To make matters worse, they often get criticised for being Antisemitic, if they don’t express typically rightist views on Arabs and Islam. It can get very uncomfortable. Not all Israelis agree with the occupation of Palestinian Territories, and their government’s ethnocratic domestic policies.

Unfortunately, this kind of racism tends to run through the German left, which, in recent years, has gotten increasingly Islamophobic and Zionist.

For a variety of reasons, from guilt over the Nazi genocide, to a desire to redress the excesses of the anti-imperialist left during the Cold War (think the pro-Palestinian Rote Armee Fraktion), German leftists can overcompensate in the worst and most symptomatic of ways.

In the second part of his interview with the Leipzig-based Jewish activist organisation JID (Jewish-Israeli Dissent), Michael Sappir and Gal Levy tell The Battleground’s Wieland Hoban how they experience this weird form of discrimination, and what it means to them as Israeli migrants.

Wieland Hoban: When you came to Germany, were you thinking about getting into political activism? Michael, you said that you weren’t really political when you first came, but when you returned….

Because of all the positive responses we’re getting in Leipzig, I’ve seen that my perception was wrong. At first, I thought that this city’s left is completely pro-Zionist and there was nothing for a person like me. That was a very bitter experience, (and) deeply hurtful.

For a whole year, I didn’t get back into politics here because of this. “Whoa, how will this meeting look when I come in and say I’m from Israel and they’ll start praising the country that I’ve resisted and escaped from?”, I worried. I didn’t want to have to explain my position.

Wieland Hoban: It’s often very difficult to know where to start explaining, and if there’s even willingness among those people to listen to these things that they haven’t come into contact with.

Being pro-Palestinian as an Israeli Jew is very painful. I’m admitting that bad things might have to happen to people I love. For them, caring about the society I come from, even though I rejected it and it rejected me, is missing. I don’t see the empathy that I need for dialogue to happen.

So called consensus in Saxony (Leipzig, Dresden, Chemnitz) on antideutsch politics already lead to the situation where certain antizionist or simple non-zionist jewish activists are banned from giving talks in left german spaces.

Wieland Hoban: But if you have anti-imperialist leftists, they’re obviously not concerned with foregrounding the Israeli Jewish experience, but with changing the oppression of Palestinians.

Michael Sappir: Which is fine politically. But on a personal level, it’s hard to get into dialogue with people who I suspect might have no empathy for my family in particular.

Wieland Hoban: Would you say that you’ve also sensed a certain hostility when you’ve been among non-Jewish Antizionists? Not so much as a Jew, but as an Israeli.

Michael Sappir: I can’t really say I’ve been among them. I mainly get these impressions from online interactions, where I get a weird feeling. Of course, there are others where I don’t.

I do have online contact with non-Jewish Antizionists with whom I feel perfectly comfortable. I get the sense that they aren’t oblivious to the difficulty and complexity of this.

Wieland Hoban: One complexity certainly is that our respective groups [JID and Jüdische Stimme], and an increasing number of groups internationally, are publicising their Jewish identity in order to fight the dominant assumption that being Jewish requires being Zionist.

At the same time, there’s the possible risk of sending the message that this is a conversation for Jews to have and that it’s for Jews to say what’s allowed and what’s Antisemitic. Do you think that has to be negotiated to some extent?

Gal Levy: What’s missing is humility. You can see that with racism, with a lot of forms of oppression. People who don’t have much of an idea or first-hand experience. I’d expect them to step back and listen to what people from that place are saying, people who are against what they’ve said and think about how one could have that opinion without being Antisemitic.

It’s really missing, and not just with the issues like the occupation. My experience in Leipzig has been that people think they really have to adopt an opinion and it really polarises – whether you’re on the one side or the other. The world doesn’t work like that.

We are Jews, we are Israeli. We are against the occupation, but we’re not against our people or our parents. Sometimes I have a problem with people who take this position – someone like Roger Waters, for example. Because it hurts to be boycotted personally. Not intellectually, just emotionally.

People don’t speak enough from the heart, especially in Leipzig and especially in the Antideutsch scene. They speak from the head. They read some articles and theories, but if you say, “I was there, people are suffering” we don’t need to have such clashes. We all experience sorrow and can have compassion for others and understand it.

Wieland Hoban: But different people have different ideas about what society should look like.

Gal Levy: Of course. I don’t think it’s a discussion just for Jews. I want other people to think and be brave enough to know that they’re not racist. This is missing. Often, when people are only criticising Israel or just the Palestinian side, that’s missing.

Wieland Hoban: For most Germans, Jews are something abstract.

Some of them – whether they actually identify as Antideutsch or are just pro-Zionist leftists, as contradictory as that is – have this theoretical idea.

That Jews are actual people, who have opinions and are maybe worth listening to – you’ve learned this the hard way. On your website, you describe some recent cases.

It was in 2011 that @dieLinke – not the @AfD – equated calling for equality in Palestine with antisemitism – assuming that every Jew must be a Zionist. Wouldn’t you consider that a contribution to the rise of “antisemitism and other forms of racism itself”?

Michael Sappir: There are very strange things in the way those pro-Zionists approach things.

There’s definitely this feeling that they never thought of us as people, so it wouldn’t occur to them that we have different opinions. There’s just “the Jews” and “Israel” and for many of them, it’s basically the same thing.

I’m also a little shocked that this comes from the left so much, because leftists are supposed to be aware that the nation-state is something related to a class structure, that there are classes with antagonistic interests, and they seem to think that Jews just have one racial interest.

That’s straight out of Nazism, not just Antisemitism. It’s a really strange belief for leftists to have. What we’ve experienced is that when we try to bring views from Israel which are critical of the situation there, it’s considered a threat here.

It’s not just something they disagree with, which they might want to have a discussion about. In both of the cases we documented on our website, which both happened in the last six months, they treated these opinions as something dangerous that has to be contained, that mustn’t be heard.

Wieland Hoban: It’s a threat to their ethical identity, which is based on making right what the Nazis did wrong. Whether you like it not, Jews have to be told what’s best for them.

Gal Levy: We handed out flyers one time because of an event at Conne Island, a really Antideutsch club. You go to the toilet there and see a huge Israeli flag. It’s a real headfuck! I really wasn’t prepared for it.

I couldn’t help but think, “I was in the military and you don’t know anything. Stop shouting at us.” It was crazy. It’s a threat, because then what can they believe? This dichotomy is the danger.

Michael Sappir: I keep thinking that what’s going on here is that there are Germans who think someone needs to be punished for the crimes of this society, but they’d prefer if it was someone else.

They prefer to move the punishment to the Palestinians. They think Israel has every right to commit atrocities, and the people who suffer these atrocities need to shut up because of the Holocaust.

Wieland Hoban: Apart from the gaps in their historical knowledge, they’ve preserved that historical situation. Jews will forever be in the concentration camp and therefore need to be saved. So they don’t see that things like social status or privilege are totally contextual, that a Jew can have majority privilege in Israel while being a minority, and potentially persecuted, somewhere else.

Antisemitism discourse is also very sensitive here because a white Jew will always have a degree of white privilege. Obviously, if you’re among Nazis and you’re a Jew then that won’t help. But just in terms of everyday harassment by the police or whatever, white Jews have the benefit of being white.

This ambiguity is a vital part of the history of Antisemitism in Germany, where Jews could become assimilated, but if the worst came to the worst, they weren’t really German. And these things are often not understood here.

An activist I know had an unpleasant experience related to this, where she was saying at an event that despite being Jewish, she’s aware of her advantages as a white European in this society. And she was condemned for supposedly denying Antisemitism.

Michael Sappir: That was in bad faith though. Someone wanted to take her out politically and found quotes that could be taken out of context and twisted this way. It’s really horrifying.

Adrestia are one of the most important hardcore bands in Sweden today. END_OF_DOCUMENT_TOKEN_TO_BE_REPLACED

The Forde Report represents a new stage of the malaise afflicting the Labour Party. END_OF_DOCUMENT_TOKEN_TO_BE_REPLACED

Everyone’s going to Poland. Not just from Ukraine, but Western Europe. END_OF_DOCUMENT_TOKEN_TO_BE_REPLACED