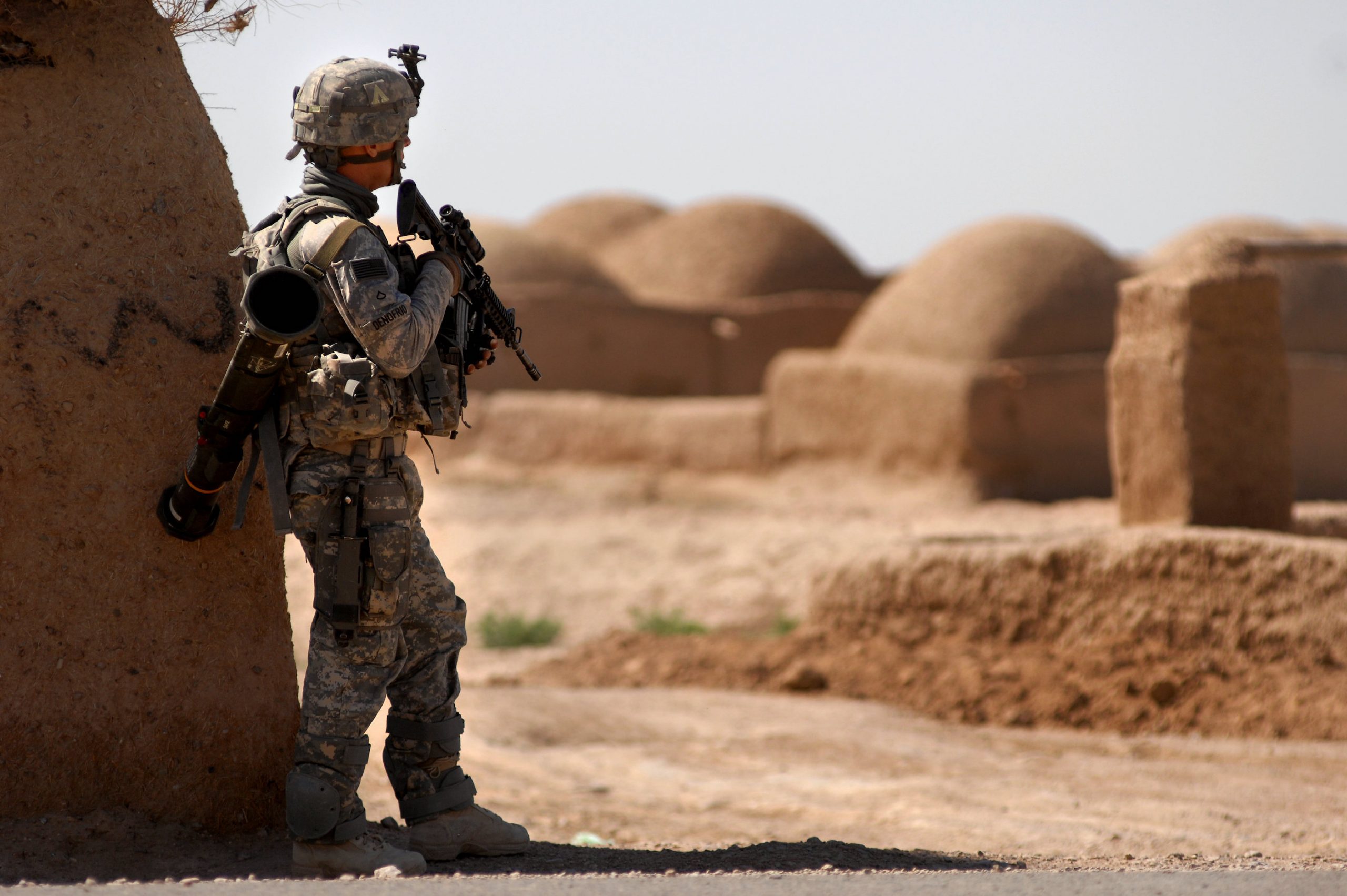 Three days earlier, venerable American humour website The Onion ran the headline, “Bush: ‘Our Long National Nightmare of Peace and Prosperity is Over.”

Nine months later, the 9/11 terrorist attacks made the gag a reality.

On Tuesday, President Biden announced that all US forces would be withdrawn from Afghanistan by the 20th anniversary of the attacks.

Throughout the long years of America’s war in Afghanistan, the situation ricocheted between tragedy and farce with dizzying frequency.

In the months between the arrival of US troops in October 2001 and the invasion of Iraq in March 2003, the war went from a crusade to liberate a medieval backwater to a neoliberal imperial makeover.

Although Osama bin Laden had been run to ground by NATO in Tora Bora by December 2001, Bush had already lost interest in the project, preferring to focus on developing pretexts for attacking Iraq.

In the months that followed, the pretence of an American mission civilizatrice was mostly dispensed with and the war in Afghanistan turned into an open-ended conflict.

As has so often been the case over the last twenty years, things offered in jest said as much or more about the situation as critical media coverage.

Hence The Onion’s employment of “Our Long National Nightmare”, a reference to Gerald Ford’s inauguration speech of 9 August 1974, when he took over the presidency from Richard Nixon.

The nightmare in question was the Watergate scandal, which the incoming Ford Administration was anxious to put behind it. But that was only the latest matter to trouble the sleep of the nation.

The Vietnam War was spiralling to its conclusion. Eight months later, North Vietnamese troops would enter Saigon, putting an end to the US-backed government in the south.

American troops had been withdrawn in January 1973, and US involvement officially ended with the passage of the Case-Church Amendment eight months later.

As the troops left, President Nixon claimed that an agreement had been concluded that would, “end the war and bring peace with honour to Vietnam and Southeast Asia”.

The effects of the Vietnam War were profound. Estimates of total Vietnamese deaths vary widely, but 3 million is not unreasonable.

The country was destroyed, many of its cities in ruins and the countryside littered with ordinance and laced with defoliants and other chemical agents.

During the war, both sides committed horrific atrocities, including mass murder. The torture and killing of prisoners and civilians, and widespread rape were commonplace.

More than 60,000 US troops were killed, and many more wounded, both physically and psychologically. Though not comparable to Vietnam’s losses, the conflict’s impact on American society was far-reaching.

The Vietnam War’s effects would shape US policy and society in profound ways over the next decades. This week’s announced withdrawal from Afghanistan is, in important ways, the apotheosis of that trauma.

9/11 was not the start of US involvement in Afghanistan. Washington had involved itself in the country since 1980, when the CIA began arming insurgents to fight the Soviets, who invaded in December 1979.

That engagement, which seemed straightforwardly aligned with the Cold War practice of conflict by proxy, threw off unintended consequences for all concerned.

The rise of Al-Qaeda and ISIS, the conditions for which had already been created by British imperialism and decolonisation, was supercharged by large infusions of money and Stinger anti-aircraft missiles.

The end of the Cold War brought a period of malign neglect. Afghanistan suffered in particular because it lacked the exploitable natural resources possessed by other states in the region.

Bordered by former Soviet states, Pakistan and Iran, Afghanistan had no appreciable reservoirs of oil. Although there were attempts to build a pipeline across it, there was little there in terms of saleable assets.

Afghanistan was very much left to its own collective devices, while the attention of western powers was focused on what seemed more compellingly dangerous situations in the Middle East and South Asia.

All this changed in September 2001. In the wake of the attacks, political and military leaders in the United States quickly zeroed in on the Hindu Kush as the point at which retribution could start.

Not immediately of course. On the afternoon of the attacks, Defense Secretary Donald Rumsfeld first tasked his aides with finding evidence of an Iraqi hand in the terrorism.

This set the tone in Washington for the balance of the Bush Administration, as well as for subsequent US governments.

Afghanistan was always an intractable problem. There was no payoff like Iraq, where America’s political establishment believed that expropriation could eventually pay for the costs of the war itself.

In comparison, Afghanistan was an impoverished feudal estate, begging to be democratised and secularised. Its only attraction was Bin Laden, a Salafist ex-pat from Saudi Arabia, who’d bought his visa helping fight the Russians.

When the US invaded, Afghanistan was given over to the ministrations of the Taliban and proxy forces. In this case the Northern Alliance, a collection of militias under Ahmad Shah Massoud, a former CIA asset.

By 2001, the Northern Alliance controlled only about 10% of the country, harassed both by Taliban forces, and by Pakistan’s military, their American-allied sponsors.

Massoud himself was blown up by a Taliban suicide bomber two days before the 9/11 attacks. But with Washington and New Delhi looking for local allies, the Alliance’s fortunes were soon in the ascendant.

In the case of India, the motivation for intervention was to counter Pakistani support for the Pashtuns, the largest ethnic group in Afghanistan.

The Indian military saw an opportunity to discommode their regional rival. Yet they were never able to acquire the sort of traction achieved by Pakistan’s military.

Given the long border that Pakistan shared with Afghanistan, it was neither surprising that they could offer more effective assistance, nor that they would continue to do so after Indian policymakers gave up.

For the United States, the goal was deceptively simple: Get the Taliban out of power through a judicious mix of aid to the Northern Alliance and Special Forces operators.

What would happen after was left to optimistic speculations about the prospects of Hamid Karzai, or for a loya jirga, a traditional Pashtun legal assembly. Or, maybe the royal family might be returned to power.

The thinking about this was remarkably fuzzy and seems to have been based on the belief that, given the opportunity, Norman Rockwell-style New England town meetings will get everyone eating the same turkey.

And there the matter was left. After Kabul was taken by the Northern Alliance in November 2001, interest in Afghanistan dropped off precipitously.

The attention of the United States and its allies was focused on Iraq, first in removing Saddam Hussein from power, then in fighting the various insurgencies that arose in his wake.

This pattern of neglect lasted until 2007 when US troop levels began to escalate as it became clear that reports of the Taliban’s demise had been greatly exaggerated.

By the summer of 2011, the situation seemed to have stabilised. Obama announced in June that 10,000 troops would be withdrawn by the end of that year.

By March 2015, the total number had declined to just under that. More reductions were promised, although these were scuppered by another Taliban resurgence.

The Trump Administration approached Afghanistan as it did everything else, in fits and starts, with the president’s perceived immediate interests as the guiding thread.

The US carried on negotiations both with the Afghan government and with the Taliban, eventually shifting most of its energy to the latter, as though they were the actual government in charge.

Eventually, the negotiations with the fundamentalists were put on hold after a soldier from the 82nd Airborne was killed in a suicide bombing in Kabul, in September 2019.

The decision was considered odd, given that American troops had been getting killed at the rate of one or two per month for four years. But, given how off the radar the war had become, any excuse would do.

More about the Trump Administration’s approach could be gleaned from their dropping of a MOAB (Massive Ordnance Air Blast bomb, AKA Mother-of-All-Bombs) mega-bomb on an ISIL cave complex in Nangarhar province.

This was typical of President Trump’s way of thinking: Make a very big explosion without risking unpopular casualties or influencing the situation in any long-term, even beneficial way.

This is US policy. Wherever possible, boots on the ground are to be substituted with high tech solutions like drones, which promote new weapon investments while maintaining a pretence of deterrence.

Nothing new here. First alluded to by President Eisenhower’s “military-industrial complex” 1961 quip, American imperial power is driven by Keynesian principles, under the guise of spreading democracy.

When the writers at The Onion wrote of the “long national nightmare of peace and prosperity,” they hit on something crucial. War isn’t a misfortune for the United States. It’s good business.

As long as it’s not too painful on the home front, that is. The logic is revealing of how the trauma of Vietnam continues to shape American foreign policy.

This was nowhere clearer than during the reign of Donald Rumsfeld as Bush’s Secretary of Defense.

While his policy goal, termed “full spectrum dominance” seemed to suggest guerre à outrance, in practice this was to be accomplished as a simulation, without any discernible, real-world victory.

Hence, the last two decades of US involvement in Afghanistan. It didn’t have to go anywhere, because it had no security direction, or purpose, at all. It just had to persist.

Mission accomplished. America had finally learned the lesson of Vietnam.

Not every media organisation can bear criticism, even self-criticism, but others require it to keep going. END_OF_DOCUMENT_TOKEN_TO_BE_REPLACED

Foucault once suggested that Clausewitz’s famous observation, “war is not merely a political act but a real political instrument” carried out by other means, be reversed, with politics made an extension of war. END_OF_DOCUMENT_TOKEN_TO_BE_REPLACED

Brexit will turn three on the last day of January, over six years since the 2016 referendum kickstarted Britain’s race to the bottom. END_OF_DOCUMENT_TOKEN_TO_BE_REPLACED