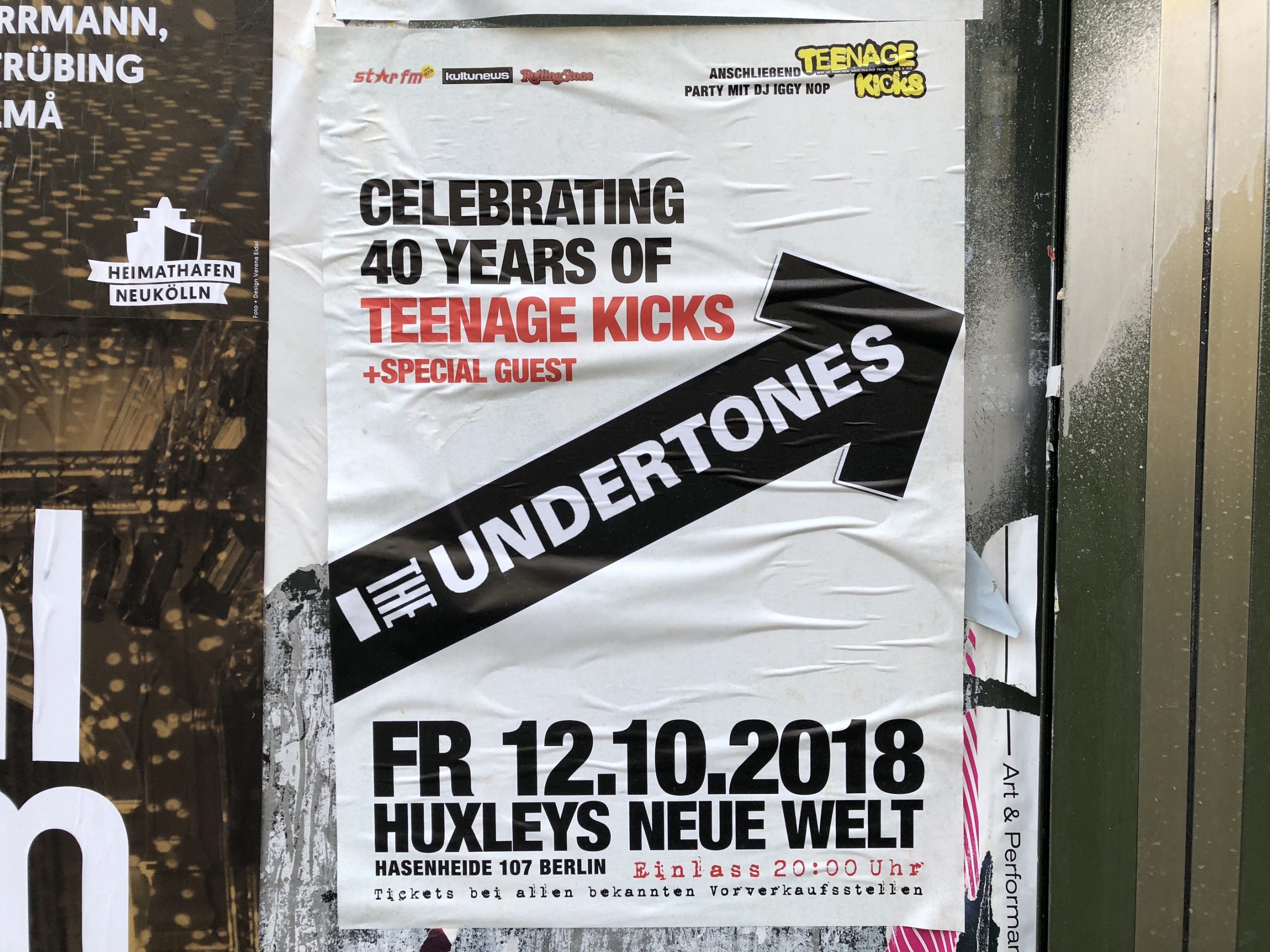 Old punks never die. They go on German tours instead.

I was a 15-year-old punk rocker in Walla Walla, Washington, a town of 30,000 in the wilds of the state’s far southeastern corner.

Reagan’s victory made the year, already alarming due to George Orwell’s eponymous dystopian novel, that much more unnerving.

I remember thinking, “At least punk rock is safe because we’re not going to have any shortage of things to bitch about.”

The difficulty with writing about punk rock is that it’s not a thing. Instead, it’s a field of overlapping phenomena and temporalities that defy consistent description.

Punk is, and always was, rather easier to figure out what it wasn’t than what it was, although this too has pitfalls.

Whatever it is that one cares to name, there was certainly someone in the vast and varied history of punk who was dead set against it.

One thing that was always clear is that punk wasn’t a movement.

Occasionally some benighted soul would send a letter to Maximumrocknroll, or any one of the other half dozen or so fanzines that in the 1980s could claim something approaching national reach, and bemoan the decline of punk as a movement.

No one paid them much heed, since it was patently obvious that there was no there there.

So how to write the history of punk. Clearly, one has to start out from the perspective of histories, rather than one coherent narrative encompassing all, or even the most important parts, of the story.

At the same time, simply conceding that punk was where I was and might well have been different elsewhere is hardly a satisfying approach.

In We’re Not Here to Entertain: Punk Rock, Ronald Reagan, and the Real Culture War of 1980s America, Kevin Mattson does arguably as good a job as possible of telling a part of the story that coheres.

Mattson does so first by limiting his timeframe to the first four years of Reagan’s presidency, from 1981 to 1984, and second by focusing on a particular issue, politics.

Taken as a whole, one can only do so with care, as punk rock in the United States in the early 1980s was the locus of intense debates about a wide range of political topics, but also to what degree (if at all) politics should be part of the substance of the scene.

Debates about what one was for (or against) overlapped with similarly passionate conflicts about whether one ought to be for or against anything.

These conflicts were hardwired into American punk, at least to the extent that it was descended from the British punk scene of the 1970s.

While there certainly were political dimensions and implications to the Sex Pistols’ work, they were more of an artistic experiment than a vehicle for promoting a particular ideology.

The same, though to a far lesser degree, was true of The Clash, who wore more conventional leftist politics on their sleeves (or RAF tee-shirts), and backed Third World revolutionary causes.

Both were immensely successful major label bands, on both sides of the Atlantic, who had a notoriously difficult time reconciling being radicals with selling millions upon millions of records.

The Sex Pistols spectacularly imploded less than a year after signing with Virgin. It was just too much for them to handle. Sid Vicious’ drug problem was just one factor in their dissolution.

The Clash fell apart under the pressures of stardom in the US, where they went on their first stadium tour supporting The Who, and played to a crowd of 400,000 at the US Festival, in 1982.

The development of Discharge and their indie label, Clay Records, meanwhile, took over in the UK, helping jumpstart what would become one of punk’s biggest subgenres, metalcore.

In the United States, hardcore scenes sprung up in New York, Boston, and Philadelphia, while in Los Angeles, there was a changing of the guard.

The first wave (The Go-Gos, the Germs, the Weirdos, X) that had grown up downtown gave way to younger, angrier bands from the suburbs (TSOL, Black Flag, Minutemen).

We’re Not Here to Entertain is remarkable for a number of reasons, not the least of which is the significant amount of research that it clearly involved. The list of fanzines consulted is unbelievably extensive.

The result is an account of debates within (and between) the regional American scenes that achieves a remarkable degree of granularity.

Mattson, who was active in Washington DC’s Positive Force, which organised benefit concerts for activist groups featuring some of the city’s biggest bands (Fugazi, Girls Against Boys,) tells a history of the debates in the US punk community, about how to respond to the threat posed by Ronald Reagan.

While some favoured overtly political responses, others thought that punk should be about individual self-expression. Mattson’s narrative is tight, and thus he resists the temptation to relate every important debate from this period.

Thus vegetarianism/veganism, which was one of the most prominent topics of debate in the letter sections of major fanzines, is not mentioned at all.

This is definitely a case of multiplication by subtraction, as it leaves behind a narrative that is more direct and easy to follow.

Nancy Barile’s I’m Not Holding Your Coat: My Bruises-and-All Memoir of Punk Rock Rebellion is in some ways a more traditional book about punk.

As with any historical phenomenon, first-person accounts are crucial pieces of evidence. The last twenty years have seen an effusion of punk memoirs so numerous that mentioning even the most important would leave no space in this review for other matters.

But I’m Not Holding Your Coat is far removed from the bog-standard of punk autobiographies. Barile (née Petriello) was a seminal figure in Philadelphia’s punk community in the early 1980s.

Her account of going from a disaffected Catholic schoolgirl to managing a band and setting up shows in one of the rougher urban areas in the United States is like a monograph.

Barile’s book is particularly important as an exemplar of the growing number of punk memoirs written by women.

It’s important to acknowledge the competing narratives here. Men were, generally speaking, more numerous in the scene, especially among bands, although there are plenty of extremely important counterexamples.

Critical accounts of punk have often been quick to adopt narratives of female exclusion and marginalisation, pointing to late 1970s UK groups like X-Ray Spex and The Slits, as exceptions to the gender rule, which helped highlight the disparity.

Of course, there was plenty of that. But Barile wants to make the point that there were always a lot of women in the punk community, and as far as Philadelphia was concerned, their representation and importance was much more equal.

Reading firsthand accounts of women in punk, one sees many more examples of women living the benefits of self-creation and self-definition that were the most consistent general virtues of its DIY ethic.

It says a lot that, although Nancy Barile is married to Al Barile, guitarist for the legendary Boston hardcore band SS Decontrol, this fact only comes up at the very end of the book.

The bulk of the narrative is about Nancy Barile negotiating (and influencing) the development of punk in an important locale outside the major cultural meccas of New York and Los Angeles.

Barile was heavily involved in events such as a 1982 show where Henry Rollins played his last show with S.OA. (from his hometown of Washington DC) before joining American hardcore’s arguably most influential band, Black Flag.

The gig featured a three-way mini-riot between punks from Philadelphia and DC, and local kids looking for a fight.

Barile was one of that breed of tough, streetwise women who one tended to meet at shows. This and other scary events are related with a degree of sangfroid that few men could have managed.

There is a lot of interesting and useful information in both of these books. But there is a deeper literary point about how complex stories are told.

There is a temptation, especially in academic writing, to make it a question of this story or that. The history of punk has to be both.

It’s important to recover histories of people taking things into their own hands, and both books are testimonies to that.

Whether it was teens or women, in the UK and in the US, punk was always about empowering people.

I can’t think of two better books describing that than We’re Not Here to Entertain and I’m Not Holding Your Coat.

Krzysztof Kieślowski’s 1976 film The Scar, which chronicles the construction and operation of a large chemical factory, breaks many of the rules that had governed narrative cinema since the silent era. END_OF_DOCUMENT_TOKEN_TO_BE_REPLACED

The Russian government is awarding prizes to Macedonian writers. END_OF_DOCUMENT_TOKEN_TO_BE_REPLACED

The 1970s was a decade of broken dreams. The end of the postwar boom brought to a close the era of middle-class liberalism in Europe and North America. END_OF_DOCUMENT_TOKEN_TO_BE_REPLACED