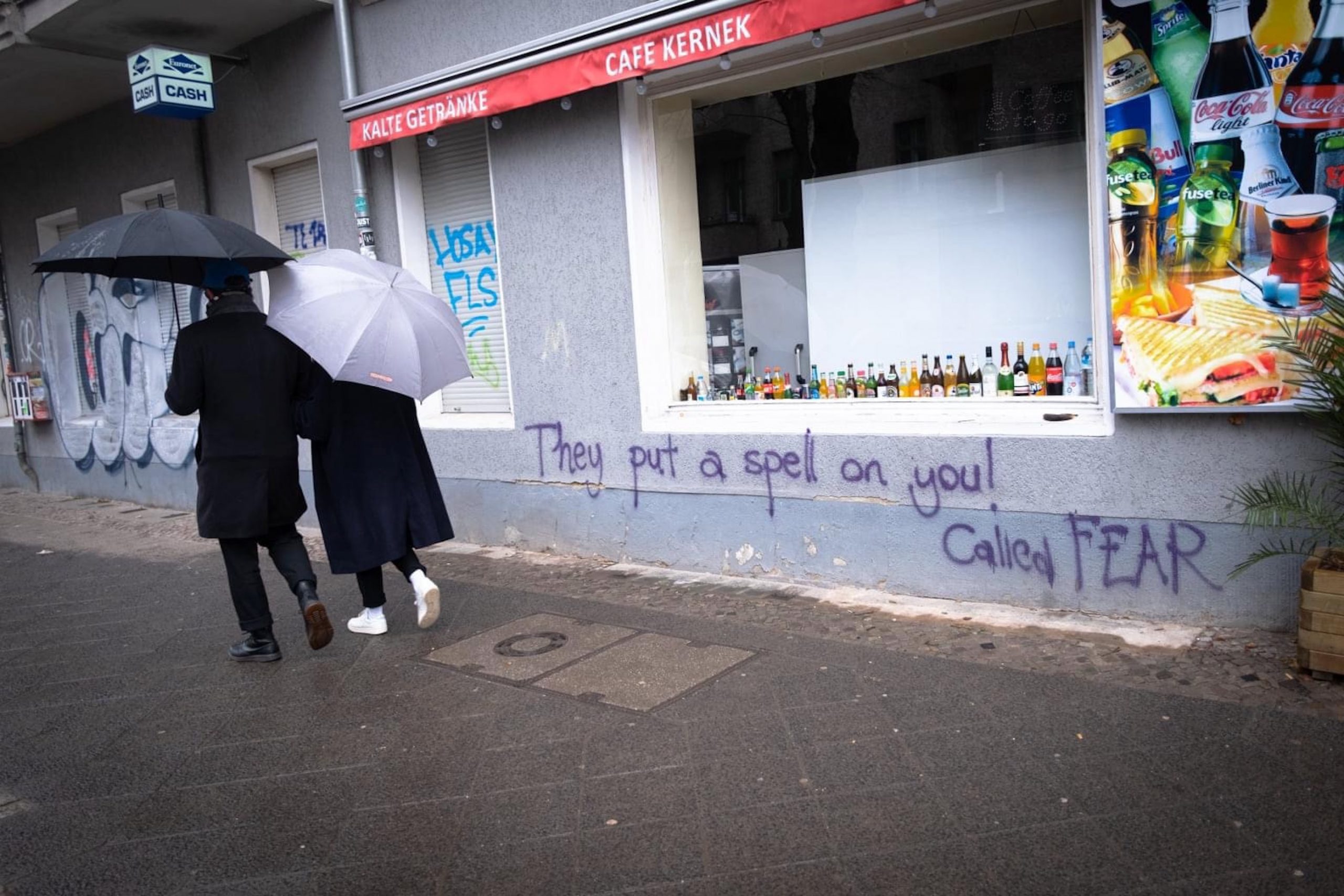 Insecurity is the mother of all fascisms. Berlin, December 2020.

The possibility that the centre-left could make a comeback seems remote at best. Across the North Atlantic world, the hollowing out of liberal democracy remains in evidence.

If it’s not as prominent as when Donald Trump was railing on Twitter against “covfefe” or Jacob Rees-Mogg was snoozing in the House of Commons, the changes of the last decade remain in evidence.

This week saw gubernatorial elections in Virginia and New Jersey, which were generally viewed in the media as referenda on the first year of the Biden Administration.

The race was close, so much so that several news outlets initially called it the other way.

But it was the result in Virginia that grabbed the media’s attention. There, incumbent Terry McAuliffe, Democratic insider and one of the last of the dyed in the wool Clintonistas, was unseated by a Trumpist.

This result was viewed as a bellwether by both media and punditry alike, as the issue of critical race theory was seen as motivating soccer moms and dads set to vote for the Republicans.

It says a good deal about the current situation within the Democratic Party that McAuliffe was criticised by former representative Tulsi Gabbard for running a “racially divisive” campaign.

Gabbard, who made and name for herself as a shill for Hindu nationalists and as one of the most notorious running (blue) dogs in the party, was more than willing to act as a platform for the message that anything that makes white people sad about the history of white people is racist.

Let’s pause here for a moment to consider critical race theory. For those who do not follow American politics closely, this is the latest Republican Red Scare: not so much a dog whistle as a megaphone blast claiming that America’s children are being taught that white people are bad.

In its more extreme versions, this is often paired with the claim that slavery was not so bad, with the slaves being cared for in a loving and idyllic setting.

But even in its more vanilla varieties, this amounts to the insistence that students be exposed to both sides of all issues, as if the Ku Klux Klan as civic activists might somehow balance out their work as cross-burning domestic terrorists.

The media, ever in search of a way to cast American politics as some sort of horse race, used these results to pile on to the Biden Administration.

The line of argument ran from the failure of the administration to push through its massive infrastructure bill to the idea that it has somehow failed to accomplish anything.

Certainly, the Biden Administration, as an alleged representative of leftwing finance capitalism, has its problems. But these are relative directly to the internal party politics rather than to some sort of generalised malaise.

The infrastructure bill is stalled in the Senate. The Democratic majority there is wafer-thin. The measure is hung up on the votes of two senators, Joe Manchin of West Virginia and Kyrsten Sinema of Arizona.

Manchin, who owes his position to his willingness to shill for polluting industries (i.e. coal) is an epigone of the left-wing of the Republican Party.

But what is a moderate Republican to do in these troubled times?

Sticking with the Trumpists quickly gets you associated with tattooed guys in buffalo hats and Kyle Rittenhouse. Better far to hibernate among the Democratic Party right and rail about bipartisanship.

Sinema is a stranger case. She started out as a progressive activist, then mutated into something else, although it’s hard to know exactly what.

Manchin’s politics are repugnant. But it’s not hard to figure out what they are, or whose interests he’s looking after.

Kyrsten Sinema’s talk of bipartisanship suggests a complete failure to understand what the word means. She reminds one of the Simpsons episode, in which Mr Burns keeps demanding that one of the players on his baseball team shave off his sideburns, but doesn’t know what sideburns are.

In any event, US politics now persistently evinces the same sort of post-democratic tropes that it did during the Trump Administration.

American politics has become a meta-version of itself, in which power is found in complexes of media images competing with each other.

And all the while there is Trump, scheming in whatever branded property he is occupying, or emerging occasionally to stage rallies to maintain his position as the objet petit a of American conservatism.

Meanwhile, in the United Kingdom, politics have become ridiculous in a different way.

One might have thought the persistent shortages and supply chain problems of post-Brexit Britain might present a political problem for Boris Johnson.

Instead, the Labour Party has become its own worst enemy, devouring its entrails.

Keir Starmer and his coterie have determined that the only way to recoup the party’s fortunes is to make the same move that Tony Blair did in the 1990s, occupying the space opened by the disintegration of the left wing of the Tories.

Two things militate against this strategy.

The first is that, unlike in the era of New Labour, the Tories are not the spent force that they were in the twilight of the Thatcher-Major era.

Boris Johnson, whatever else one can say about him, has mobilised large swathes of the Tory base and lured significant potions of traditional Labour voters to his standard.

The idea that Starmer could fashion himself as a down-market version of Blair doesn’t cut much ice.

At the same time, Starmer has decided that his real problem is not the Tories, but the left-wing of his own party.

These days hardly a week goes by without some longtime member of the Labour left being unceremoniously bundled out of the party.

Starmer seems to want to couple this with draping himself in the Union Jack, but that image hardly suits. In any case, if things go on as they have been for much longer, there won’t be much of a Union left.

By comparison with the UK and the United States, German politics seems positively pedestrian.

The results of the most recent elections produced the materials for a modern version of the Bassermann to Bebel coalition that was often discussed in the Imperial period.

The modern version would exclude the CDU/CSU at one end, and Die Linke at the other, but would include the FDP, who only a few years ago were dead in the water.

Unlike in the US and the UK, German politics seems oddly focused on quotidian matters such as how the country will be maintained and what workers will be paid.

This is a queer reversal from much the last few years, when it seemed that the populist groups like PEGIDA and the Alternative für Deutschland portended a political shift.

That change has been facilitated by the rightward shift of the SPD and the determinedly post-traditional politics of the Greens.

It helps that Germany has managed to impose its export-led growth on the rest of the EU, so that it seems like the most important political imperative is to keep the circuits accumulation ticking over.

The end of the Trump Administration, it was commonly suggested, would permit a return to the political norms and nostrums of the preceding era. This has not occurred.

Politics in much of the North Atlantic seems to have permanently moved into the realm of pure spectacle.

The fact that Germany can present itself as a moderate, system preserving power (perhaps the only adult in the room) represents a profound shift in the politics of the post-industrial world.

Where does this leave liberal democracy? News media in the US and the UK persist in talking about it as if it is some sort of Eden that could be returned to if only people willed it so.

Until a force arises with the power and the will to change that calculation, global politics will continue to move rightwards, with no obvious endpoint in sight.

Brexit will turn three on the last day of January, over six years since the 2016 referendum kickstarted Britain’s race to the bottom. END_OF_DOCUMENT_TOKEN_TO_BE_REPLACED

Be careful what you wish for. It may be a cliché, but it’s one the Greens are learning all over again. END_OF_DOCUMENT_TOKEN_TO_BE_REPLACED

Before his arrest, Andrew Tate was just another influencer with bad politics. END_OF_DOCUMENT_TOKEN_TO_BE_REPLACED