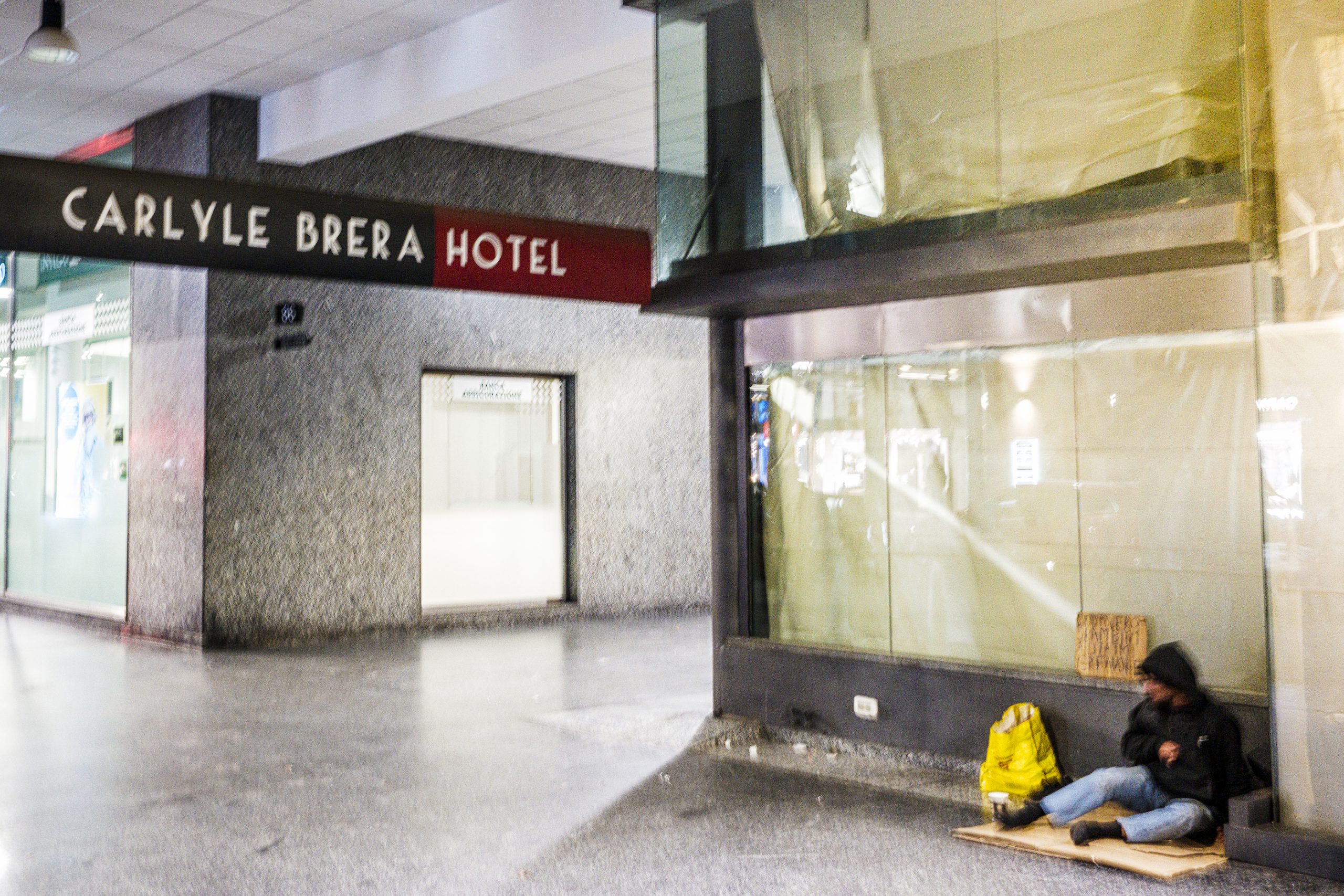 Politics has come to be dominated by paranoia. The continuum that spans today’s right, from conspiracy theorists to sovereigntists, to neo-Nazis and anti-vaxxers, is the new normal.

To be fair, all eras seem to throw up a certain number of such types. But, in eras of decadence and decay, the lunatic fringe migrates to the centre.

During such times, it’s no surprise to politicians recommend that people drink bleach to counter the Coronavirus, or claim that Arab refugees want to impose Sharia law in Poland.

In the US, what passes for intellectuals can be found in the op-ed section of The New York Times. There, one can find the vapid stylings of David Brooks or Ross Douthat, his Catholic mini-me.

There are moderate liberals like Gail Collins, but also Bret Stephens, whose goal seems to be to illustrate the bankruptcy of everything that liberalism has traditionally implied.

But, the leader of the pack is the Nobel Prize-winning economist Paul Krugman, if by “leader” we mean the guy most committed to providing a factual basis for his assertions.

Even if one doesn’t buy into his brand of moderate Keynesianism, Krugman’s heart is in the right place, and what he says is reasonable and fair.

This doesn’t seem like a terribly high bar. However, it puts the economist several paces ahead of most of the talking heads burdening the opinion pages of The New York Times.

But for sheer volume and heft of intellectual output, the true champion of centre-left public intellectuals today is Thomas Piketty.

The French economist was mostly unknown outside academic circles until 2014, when his Capital in the 21st Century was published in English.

Over nearly 700 pages, the book provided a closely argued analysis of the largest mass of data ever assembled for the study of economic inequality over the last two centuries.

Like Michael Hart and Antonio Negri’s 2001 best-selling opus on globalisation, Empire, Capital in the 21st Century quickly became one of those works that was much more talked about than read.

Within months, it became a staple of bookstore remainder racks, as the ravening hordes discovered it contained great lashings of hard arguments and boring, inconvenient facts.

The world’s serious people found little to actually love in Piketty’s book, though.

Basing his conclusions on an assemblage of all of the available data on the topic, Thomas Piketty argued that rising inequality was hardwired into capitalism.

This narrative was unpalatable to liberal capitalists, and the airwaves were soon buzzing with indignant market zealots accusing the Frenchman of every sin in the (academic) calendar.

Piketty’s next major foray into the public eye was Capital and Ideology, released in March of last year. Longer by a third than the previous book, it functioned as a sort of companion piece.

Where the first book dealt with the history of inequality, the second addressed the ideological justifications offered in its defence.

Capital and Ideology failed to find much resonance, for many of the same reasons that its predecessor was little read: Large amounts of data don’t make for punchy slogans.

However, the topic makes sense as the next step in Thomas Piketty’s overall political project.

If inequality has been a consistent feature of liberal capitalism, figuring out how this has been justified is crucial to understanding how such a disliked economic system persists.

To do so, Piketty has mastered a vast quantity of historical information. But the impulse to convey it all in its manifold glory results in a narrative weighed down by a mass of detail.

Even Paul Krugman, the leading booster of Piketty’s earlier work, complained that it was difficult to know what the ultimate point being made might be.

Time for Socialism: Dispatches from a World on Fire, 2016-2021, is a compilation comprising articles written by Thomas Piketty for Le Monde over the course of the last five years.

“He grasps the dynamics of grotesque #inequality as well as any living economist, and his conversion to the cause of radical redistribution and social ownership of #wealth must be taken seriously.”

It is an interesting book, and not merely because of the actual content of the short essays reprinted there.

Piketty devotes much of Time for Socialism to highlighting the practical implications of the positions he took in Capital in the 21st Century, to matters of day-to-day politics, from economic productivity in France and Germany to questions of global economic order.

Thomas Piketty’s socialism is moderate and pragmatic. Redistribution is propounded not as a matter of morality, but of making the economy function more stably and sustainably.

Whether they’re critiques of Emmanuel Macron’s policies, or deficiencies in the economic platform of Marine Le Pen’s Rassemblement National, Piketty’s arguments are models of objectivity.

One might agree that his redistributive ideas will work, (or that it would be a good thing if they did), but his writings have the virtue of presenting his views with a great degree of clarity.

Whether one thinks that Thomas Piketty is right or wrong, it must at least be conceded that, given what he claims, it is possible to know the difference.

At a deeper level, the articles from Le Monde can be read as a road not taken. It’s hard to escape the conclusion that inequality is at the core of capitalism, even if you don’t accept Piketty’s take.

The question remains as to what to do about it. The pieces from Le Monde represent what would be involved in reform.

Viewed from this perspective, the question of how inequality has been justified seems at the same time both warranted and futile.

One justification for the persistence of inequality was provided half a century ago by Simon Kuznets: The market is a rising tide that lifts all boats.

For that to work in Thomas Piketty’s terms, the tide itself must be reshaped so that it doesn’t drown the most vulnerable. Ultimately, this is what Piketty’s redistributionist agenda is all about.

Yet, Piketty seems disinclined to deal with the underlying systemic imperatives. Capitalism works the way it does because it is about power rather than just money.

If speaking in reasonable terms to the rich was going to succeed, it seems reasonable to suggest that it would have done so already.

In the current malaise, the capacity of facts to overcome the wave of disinformation generated by the far-right seems even more questionable.

It’s tempting to compare Piketty to Krugman. There is certainly a degree of similarity, particularly in their common goal of killing off disinformation about the economy.

But the French economist’s writing generally lacks the stylistic cut and thrust of his American colleague.

Thomas Piketty remains, at heart, an academic and writes with a dry, sachlichkeit that sometimes seems more appropriate to a conference paper than a newspaper article.

Ultimately, Piketty is fighting the good fight. Even if his critical enterprise doesn’t drill down to the level of the system and its ability to maintain itself in the long run, he’s doing right by us.

Trying to inject and maintain factual content into public discourse is a virtue, one that is in desperately short supply these days.

To propose any kind of socialism at a time of rampant libertarian paranoia is nothing short of a courageous act.

Walter Ruttmann’s 1927 film Berlin: Symphony of a Metropolis is strangely suited for these times, when traditional moviegoing is in perilous decline, providing a way to disentangle the art of cinema from that mode of consumption. END_OF_DOCUMENT_TOKEN_TO_BE_REPLACED

That the first song on Soulside’s new LP ends with a sample from a 1952 American civil defence film Duck and Cover, about a nuclear apocalypse, says it all. END_OF_DOCUMENT_TOKEN_TO_BE_REPLACED

Based on the flurry of academic titles about it over the last decade, punk has become as common to college curriculums as it is to the Top 40. Why this took so long is baffling. END_OF_DOCUMENT_TOKEN_TO_BE_REPLACED