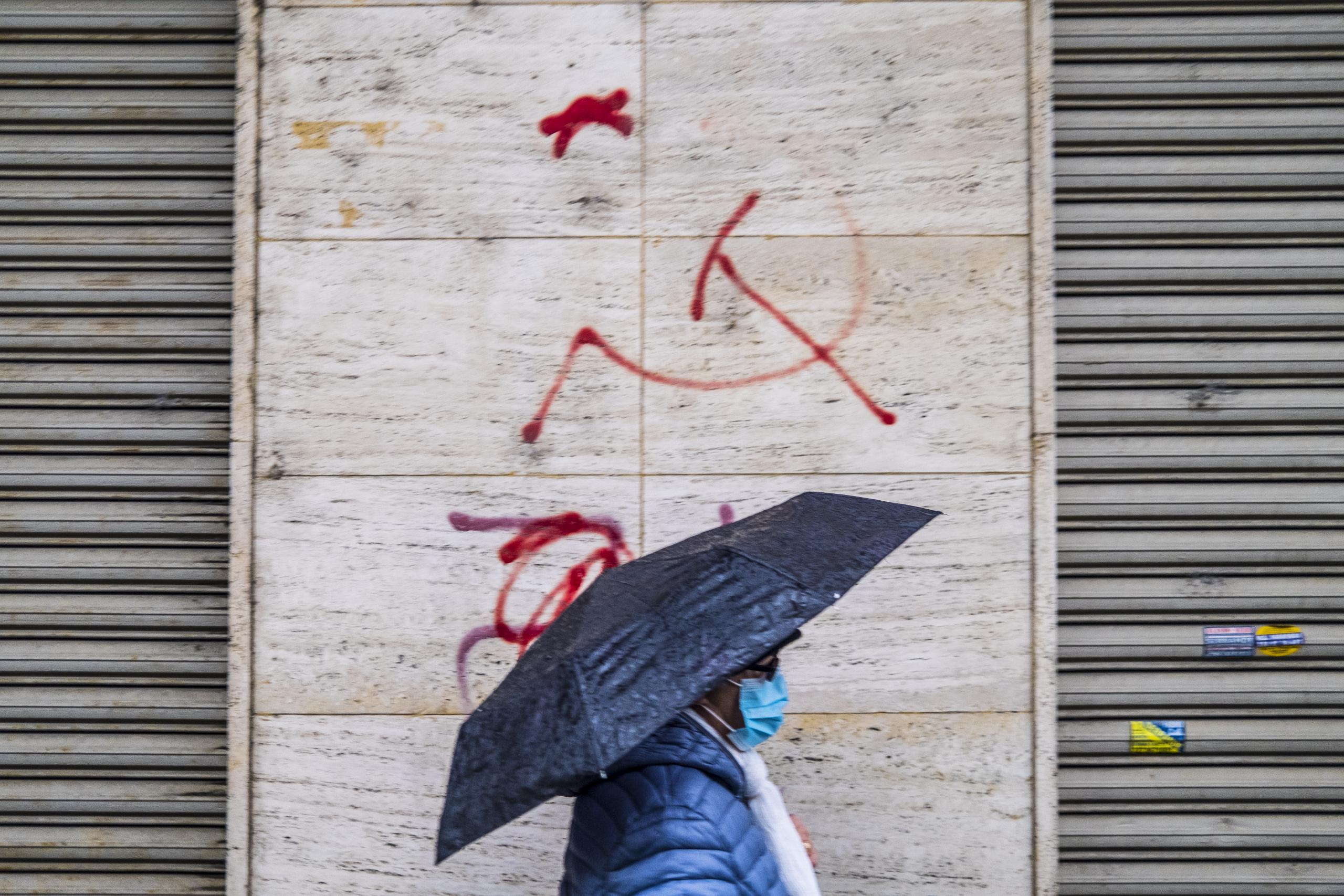 But Fukuyama himself was (and continues to be) guilty of a conservative whiggism to which one might have thought the 20th century had put an end.

History has not ended, certainly not in the sense of Fukuyama’s simplifiers (events continue to happen), but also not in the sense that Fukuyama proposed, that liberal democracy is its endpoint.

No, the days of the great moderation are long gone. Likewise, the peace dividend, compassionate conservatism, and the idea that reasonable people could see past their differences West Wing-style and smooth the path to a land of milk and honey.

The much-vaunted “End of History” is now over, to be replaced, so the slightly (if not unreasonably) grumpy young men from the Aufhebunga Bunga podcast contend, with The End of the End of History.

In their eponymous book, podcast hosts Alex Hochuli, George Hoare and Philip Cunliffe map out a present (and a future) in which both politics and post-politics have been replaced by anti-politics.

All this spells the death of Fukuyama’s project, but also the passing of the social-democratic politics that had been the meat and drink of the left for more than a century.

Both Francis Fukuyama and the social democrats can, perhaps, be forgiven for thinking that they had discovered truths that would endure.

At the end of the Cold War, liberal democracy had finally been delivered after being deferred for decades by the blight of international communism.

The social-democratic illusion was longer lived, but in the end, was similarly lacking in permanence.

The yoking of labour militancy to bread and butter unionism and liberal technocracy served to enervate organised labour.

What resulted was the forsaking of class struggle in favour of milquetoast electoral centrism, the vanity of which was cast in brutal relief by the petering out of the postwar boom.

When the system re-stabilised after the end of the Cold War, the ensuing era was characterised by what the authors (following the sociologist Colin Crouch) term “post-politics”.

Liberals and conservatives seemed to believe a lot of the same things, at least about how the economy should be run and who should be in jail.

One of the reasons underlying the intense, if mostly for show displays of rage at Bill Clinton during the 1990s, stemmed from the fact that he adopted Republican policies as a Democrat.

The end of the end of history, which followed the trauma of the global financial crisis of the late noughties, changed politics dramatically.

In the era of the end of history, politics had given way to post-politics, in which democratic competition was replaced by neoliberal economic consensus and the rise of government by experts.

Economic relations became naturalised. It was like the weather: nothing could be done to change its course. At least until Trump arrived and suggested stopping hurricanes with nuclear weapons.

Communism was gone. Social democracy had found a modus vivendi with neoliberalism.

In the liberal imaginary, divisions with conservatives were the kind of things about which reasonable people could disagree.

And then it all went away.

The financial crisis kicked a lot of the certainties of the previous era to the curb.

The dream of homeownership as the gateway to wealth was replaced by underwater mortgages and disintegrating equity.

Just when that seemed to be fading into memory, after the eight years of neoliberal hope of the Obama Administration, along came Donald Trump.

One is reminded of when US Secretary of Agriculture Earl Butz told a gathering of entertainers in 1976 that the reason the Republicans couldn’t attract African Americans was that the only things “coloureds” cared about were “tight pussy, loose shoes, and a warm place to shit”.

This line led to Butz’s resignation in short order. But now we are living in a different time.

Back then, Donald Trump’s “grab ‘em by the pussy,” comment would have had catastrophic consequences. But Trump’s politics were of a fundamentally different sort.

Like Silvio Berlusconi before him, The Donald was a practitioner of the Great Affirmation. Why act in loco parentis for the general superego?

Donald Trump’s great discovery was that playing to the white male id was the skeleton key to American politics.

Trump, like Berlusconi, was a symptom of the rise of anti-politics in the crumbling neoliberal order. And the symptoms were all around.

Strongmen were the order of the day, from Putin to Bolsonaro, to Orbán, to Duterte. More worryingly, democracy now seemed to be generating some distinctly less optimal outcomes.

Chief among these was Brexit. Widely characterised as a mix of democratic dérapage and UKIP mendacity, for Leave voters, it had more to do with fears of losing national sovereignty.

Brussels and the globalists were slowly but surely taking it away from them, according to Nigel Farage and his allies Marine Le Pen and Matteo Salvini.

On the left, the end of the end of history was characterised by what the authors term Neoliberal Order Breakdown Syndrome (NOBS), “the inability of the liberal establishment to accept, explain or respond to political change”.

This proves to be a very effective concept for analysing the inability of centrists to come to terms with the new political order.

Admittedly, The End of the End of History overplays its hand. The book dismisses concerns about Trump’s persistent lying as an expression of the liberal romance with expertise.

Likewise, the book waves away the malign influence of far-right media and disinformation.

Neither of these things are figments of the liberal imagination.

The End of the End of History also takes a jaundiced view of contemporary identity politics, parallel to the conservative socialist trend in the United States, to privilege class over culture.

Unlike Mark Fisher’s Exiting the Vampire Castle, which promoted a communism that assimilates difference in a “cool” and “proletarian” way, liberal identity politics reflects the fragmentation of society and further erodes social democracy.

Short of a return to the pre-neoliberal economies of the 1960s, The End of the End of History doesn’t see a lot of ways out of this crisis. The options it outlines are even worse.

From Chinese state capitalism, to Vladimir Putin’s far-right nationalism, to a neoliberalism managed by centre-left parties, the alternatives are truly dire.

The lack of horizons, according to The End of the End of History, reflects the left’s aversion to politics.

From the Arab Spring to Occupy, its activities are mostly tangential, preoccupied with hierarchy, violence and multiculturalism, not actual political struggles.

It’s hard not to read these criticisms as descending from a mostly orthodox Marxist point of view, typical of the criticisms levelled at the new social movements that sprang up in the 1970s.

The fact they are used now, like this, according to The End of the End of History reflects the breakdown of the so-called “great moderation” of the 1990s and ‘00s, following the Cold War.

The collapse of Italy’s Communist Party (PCI) and the formation of the neoliberal Partito Democratico, by many of its ex-members, is one such example, whose results are still being felt.

Needless to say, the world that has emerged since the financial crisis has been far more turbulent than parties like these were built for, unlike the leftwing parties that preceded them.

Jeremy Corbyn’s Labour, Spain’s Podemos, and Portugal’s Bloco de Esquerda have been the best answers, but have yet to prevail (especially in the UK), though Podemos and the Bloco survive.

Still, it’s hard to see them making the difference that The End of the End of History prescribes.

Yet, one cannot walk away from the book thinking there’s something more radical out there that it wants, which it can’t put its finger on. Perhaps that’s the point.

Whether one agrees with it or not, The End of the End of History presents a compelling portrait of how politics has changed in Europe and the Americas since the 1970s.

To have concluded that history stopped following the collapse of the Soviet Union, as the crisis in Ukraine clearly demonstrates, has to be one of the worst judgement calls, ever.

I can’t think of a better time to write the corrective. The End of the End of History is a good first step in that direction.

Krzysztof Kieślowski’s 1976 film The Scar, which chronicles the construction and operation of a large chemical factory, breaks many of the rules that had governed narrative cinema since the silent era. END_OF_DOCUMENT_TOKEN_TO_BE_REPLACED

The Russian government is awarding prizes to Macedonian writers. END_OF_DOCUMENT_TOKEN_TO_BE_REPLACED

The 1970s was a decade of broken dreams. The end of the postwar boom brought to a close the era of middle-class liberalism in Europe and North America. END_OF_DOCUMENT_TOKEN_TO_BE_REPLACED