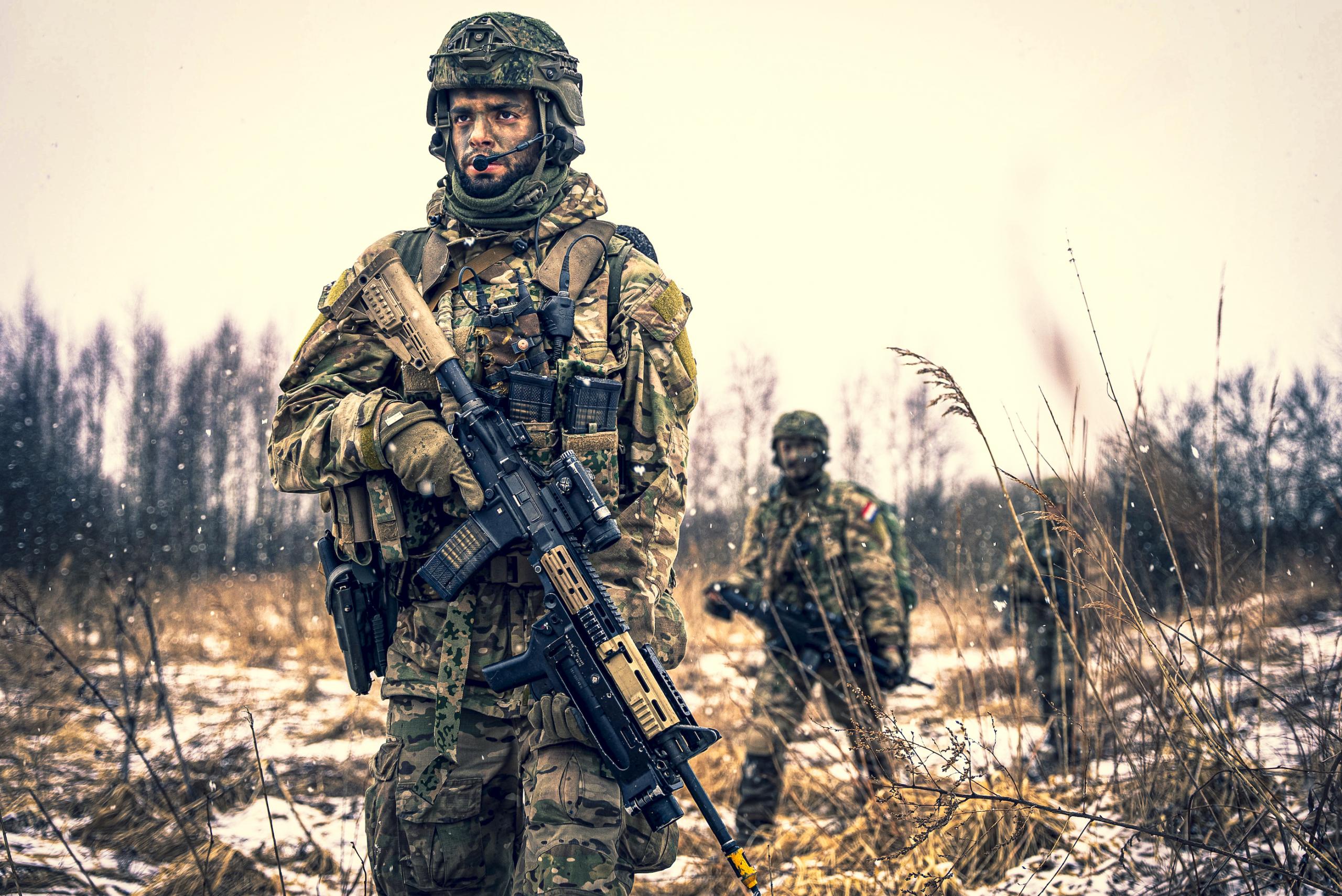 Half a century on, the North Atlantic Treaty Organisation increasingly looks like a problem if you’re looking at it from Moscow. You can understand why.

If Russia hadn’t invaded Ukraine, the Afghanistan withdrawal would have led to something else, like a European Union army, while the US redeployed in the Pacific, facing China.

Few could have foreseen the war that’s taken place in Eastern Europe since February, and how it refocused the alliance on its original foe, Moscow, after two decades of pointless fighting in the Middle East.

Talks for the formation of NATO officially began in July 1946, although secret discussions had been conducted by the United States, Great Britain and Canada for several weeks before that.

They took place against the backdrop of the first crisis of the nascent Cold War, with the Berlin Airlift having begun only ten days before.

At that point, the imperatives associated with the alliance’s founding were clear.

Public opinion in the United States was returning to the isolationism that had kept the country out of the first years of the fight against Nazism.

Much of Europe was still in ruins, and US President Harry Truman had signed the Economic Recovery Act of 1948 (later to become known as the Marshall Plan) into law in April of that year.

The first of these was the fear among many European states that Germany would rise again to threaten the peace of the continent as it had done twice in thirty years, with horrific consequences on both occasions.

The second was the fear that communism would become the dominant force in European politics. Of these, it was the latter that presented the greatest challenges going forward.

Germany was shattered, partitioned between the four leading Allied powers and only beginning the recovery from its total prostration in the wake of the war.

Communism, on the other hand, presented a much more immediate threat.

The threat had focused the minds of Allied planners since the middle of 1943, when it became clear that the defeat of the Hitler regime was a matter of when not if.

After Germany’s final defeat, the communist threat’s most menacing face was the more than 150 divisions of the Red Army now occupying Eastern Europe.

Truman later recounted an exchange between Churchill and Stalin at the Potsdam Conference in July 1942.

Churchill chided his Soviet counterpart about the treatment of Catholics in Russian-occupied Poland, noting that the Pope had concerns about the matter.

“The Pope?” replied Stalin, somewhat bemused, “How many divisions has he?”

But the threat was not solely military. Capitalism sputtered in the late 1940s, evincing many of the same problems that had led to the rise of extremist movements in the years preceding the war.

Communist parties were growing in strength, especially in France, where they garnered more than 25% of the vote in the legislative elections of 1946, and in Italy, where only extensive propaganda (and more than $11 million from the CIA) managed to limit the communist vote to 30% in the spring of 1948.

The formation of NATO in April 1949, comprising the United States, Canada, and ten European states was seen as a victory for those who sought continued American engagement in the problems of Europe.

In fact, the organisation itself did little during the subsequent decades of the Cold War.

Conceived as a military alliance, with Article V of its charter famously committing the member states to the collective defence of any individual state subjected to hostile action, NATO did not undertake a single military action before 1990.

This outcome was preordained. The purpose of the organisation was to avoid another European war rather than to fight one.

As the British Labour politician Denis Healey noted in his memoirs, in the opinion of most Europeans, “NATO was worthless if it could not prevent another war; they were not interested in fighting one.”

On the Russian side, Stalin was disinclined toward another military conflict, hoping instead to form a buffer of states either neutral or Soviet-controlled to shield the western border of the USSR.

He was particularly annoyed at the leadership of the Socialist Unity Party, the communist party in the Soviet zone of occupied Germany, for their role in the formation of the German Democratic Republic as an independent state.

Stalin’s goal was a unified and neutralised Germany, but (as was all too often the case) his henchmen failed to carry out his aims.

Still, there was widespread fear that the necessity of repelling a Soviet military incursion might require the rearming of Germany, an anathema to many European states, not least the French.

In the interim, the Korean War broke out in June 1950, shifting the focus of Cold War politics to Asia, and contributing to an economic boom in Europe that did much to blunt the electoral appeal of communism.

NATO remained a static element of the western European glacis against communism for the balance of the Cold War.

When the Berlin Wall was constructed in 1961, NATO forces in Europe numbered more than 400,000. Even then, there was enough doubt about the organisation’s capacity to repel a Soviet attack that France independently pursued nuclear armaments starting in the 1960s.

It took until the 1980s before nuclear missiles were eventually stationed in West Germany. NATO did play an important role in the events of 1989-90, if only in a negative sense.

In February 1990, US Secretary of State James Baker assured Soviet President Mikhail Gorbachev that NATO would not seek to expand “one inch further eastward”, a promise that smoothed way for the Kremlin to dismantle the Warsaw Pact.

While it may have been meant in earnest, Baker’s promise wasn’t kept.

Many of the states that had been compelled into client status by the USSR for three decades sought to protect themselves from occupying a similar status vis à vis post-communist Russia.

From the Hungarian revolution in 1956 to the Prague Spring in 1968, and the violence of Romania’s 1989 revolution, Eastern Europeans had enough of living in Russia’s shadow.

Such events are often forgotten in American criticisms of NATO’s expansion eastwards. Nonetheless, communist rule had been hard to live under and inspired the turn westwards.

This dovetailed with the so-called Bush-Wolfowitz Doctrine that evolved in the early 1990s, which held that the United States was now the only superpower and should defend and assert its interests.

Between 1990 and 2004, ten states in Eastern Europe joined NATO. At the same time, the organisation took on a more muscular profile both in Europe and beyond.

In addition to significant engagement in the conflict in the former Yugoslavia from 1992 to 1994, and again in 1999, NATO also expanded its remit to include deployments in Iraq, Afghanistan and Libya.

The promises made to Gorbachev and the subsequent expansion of NATO’s military brief have formed the basis for a line of argument justifying Russian policy toward Ukraine since 2005 and its military operations since 2014.

Realist scholars of international relations, most prominently American political scientist John Mearsheimer (whose 2014 talk on this topic has garnered more than 18 million hits on YouTube), have argued that the United States bears the bulk of responsibility for Russia’s invasion of Ukraine.

Mearsheimer’s views have achieved a great deal of traction, not least from the Russian Ministry of Foreign Affairs, as well as from Vladimir Putin’s various boosters in the Trumpist wing (or perhaps more accurately mainstream) of the Republican Party.

It has also caught the attention of leftists, who see in John Mearsheimer an ally in their opposition to US imperialism, much as many people did after the publication of his co-authored work (with Stephen Walt), The Israel Lobby and U.S. Foreign Policy (2006).

The contours of the two moments are much the same: anti-imperialists in both cases see Mearsheimer as proving that a view they hold is also rational and thus defensible.

Ironically, John Mearsheimer shares almost none of the politics of the progressives now citing him. As Arthur Koestler once noted, you can’t help people being right for the wrong reasons.

There is much to criticise about John Mearsheimer’s views, and of those on the left who espouse them. But the larger issue of NATO remains and has been cast in relief by the current crisis.

Irrespective of whether Vladimir Putin’s invasion of Ukraine is a legitimate response to some sort of provocation, the question remains as to what the purpose of NATO might be in the long term.

Clearly, it is no more a military bulwark against contemporary Russian expansionism than it was against Soviet expansion thirty years ago.

It could be if Russia decides to invade an EU member state like Poland. However, nothing like that has happened yet to test out the alliance’s actual resolve.

In the 1950s, it was conceded that if the Soviets were to invade, they could be on the English Channel in a matter of weeks. There was simply no way NATO could muster enough forces to prevent this.

Certainly, Russian military prowess has taken a beating in the last few weeks, although this is as much a matter of bad tactics as anything else.

A combination of arrogance and poor planning seems to have caused Russia’s generals to overlook the fact that a rocket-armed 12-year-old can take out a tank from two kilometres away.

Be that as it may, there is exactly zero chance that actual NATO forces will get deployed in Ukraine.

Much as the nuclear balance of terror doesn’t get as much press as it used to in the 1980s, NATO is still in play, which makes US fears for Europe and Russian fears of attack from the West similarly risible.

NATO’s mere mentioning ratchets up tensions and provides narratives of justification that would be absent if the question at issue was just the eastward expansion of the European Union.

Think of it in the same light that Americans invoked communism during the Cold War. More often than not, it was just an excuse to disguise the imperial agendas Washington pursued.

While the argument that the alliance caused the invasion of Ukraine fails to explain the war, it’s also the case that Moscow blames NATO because the war naturally invites its participation.

Without a doubt, Russia fears NATO. But it also has a colonial relationship with Ukraine that goes back centuries and has serious economic reasons for wanting to return the country to its portfolio.

NATO, with or without Volodymyr Zelenskyy’s repeat demands for admission, and its military backing of his armed forces, will always be an easy means of excusing Moscow’s ambitions.

Confronted with the NATO story, the best that we can do is understand why the alliance has been reanimated by the conflict and how it fits into this picture, in both its real and imagined roles.

That would be a more reasonable way of understanding NATO’s place in the Ukraine war and its propagandistic value for both sides in the conflict.

Anything else is just noise. The noise of war.

Photograph courtesy of NATO. Published under a Creative Commons license.

Not every media organisation can bear criticism, even self-criticism, but others require it to keep going. END_OF_DOCUMENT_TOKEN_TO_BE_REPLACED

Foucault once suggested that Clausewitz’s famous observation, “war is not merely a political act but a real political instrument” carried out by other means, be reversed, with politics made an extension of war. END_OF_DOCUMENT_TOKEN_TO_BE_REPLACED

Brexit will turn three on the last day of January, over six years since the 2016 referendum kickstarted Britain’s race to the bottom. END_OF_DOCUMENT_TOKEN_TO_BE_REPLACED