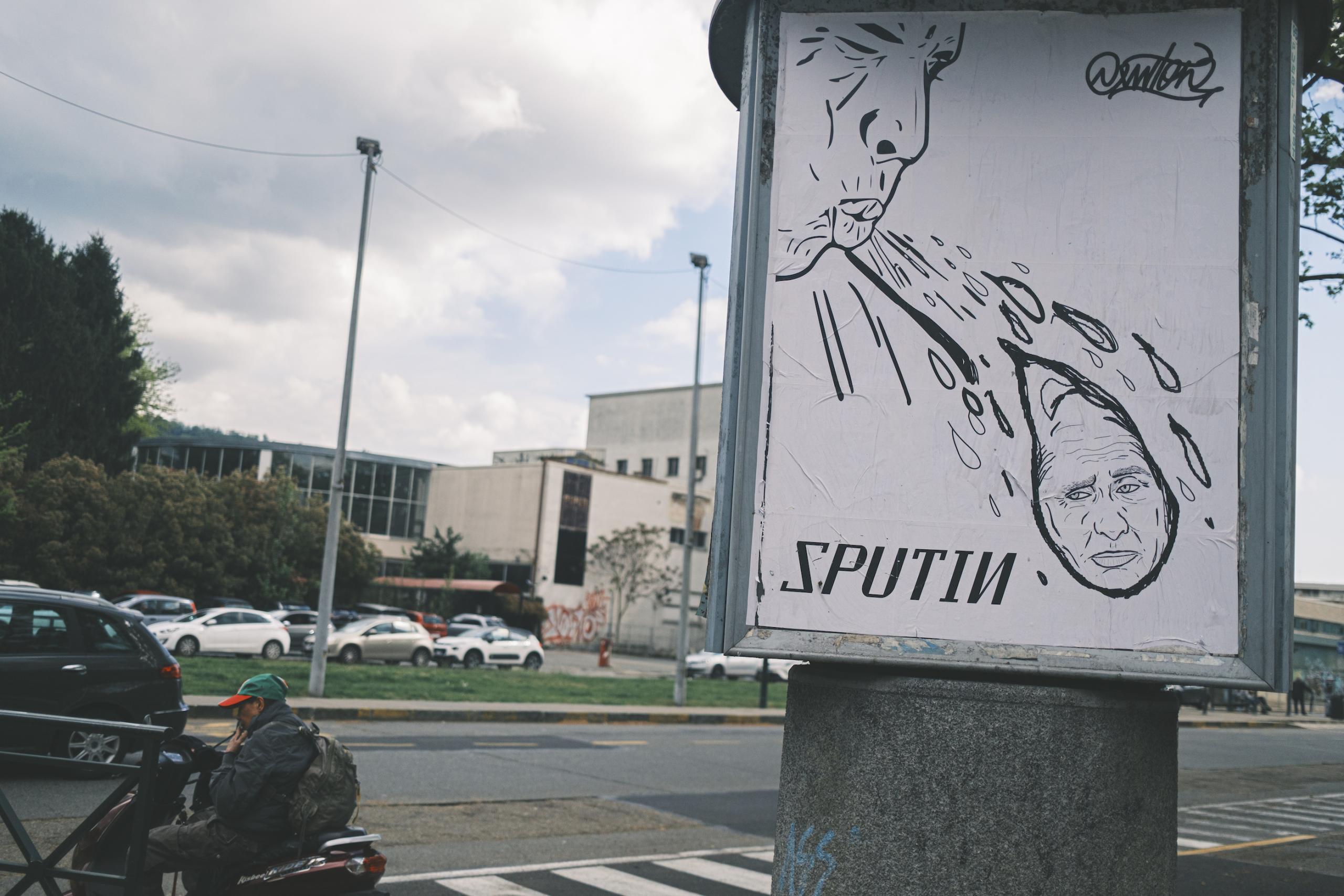 You can’t do any better than Foreign Minister Sergey V. Lavrov for confirmation.

Leaving a meeting with UN Secretary-General António Guterres on Tuesday, he complained that the US and EU “filling Ukraine with weapons” undermines peace talks.

It was the second such reality check in 24 hours.

On Monday, Lavrov had raised the spectre of nuclear war, because, he explained, NATO was “engaged in war with Russia through a proxy and arming that proxy”.

It’s not hard to parse. But, after weeks of alleging Nazi this and genocide that, it was relieving to hear Putin’s top man issue a threat.

Ukraine’s fightback was clearly getting to him. And it was a grudging acknowledgement that public opinion of the war was not favourable and that Russia is pissed about it.

Consider the context. Ever since Russia’s invasion began, media coverage of the conflict, and global public opinion, have grown more and more critical of Moscow.

Dead bodies in the streets and mass graves in Bucha and elsewhere have rightly blunted Russian propaganda at every turn.

Criticism of NATO and the EU, for having helped underwrite the crisis, has similarly failed to impact global opinion.

Russia is today’s Goliath, and Ukraine is David, locked in a typically Biblical conflict narrative.

That the crisis has turned out so badly for Moscow could have been predicted.

Despite Ukraine’s complaints that it had not started out the war with adequate supplies, and had not been admitted to NATO yet, Kyiv had been preparing for this fight for years.

Anyone not paying attention simply wasn’t looking, or at best, in denial of what kind of struggle lay ahead for Russia.

The situation all points to catastrophic errors in judgement in the Kremlin, of a hubris so great and intelligence so poor, that it would now have to threaten nuclear war to survive.

But such failures are not the province of Russia alone. They also afflict the West and the punditocracy.

Take the various statements by American political scientist John Mearsheimer over the course of the last fifteen years, reiterated with increasing frequency since the outbreak of the war.

The Russian invasion of Ukraine is the fault of NATO and by extension the US, which tried to push its liberal agenda into the regions of the former Warsaw Pact too aggressively.

This is a position adopted by moderate liberals, centrists, and neoconservatives, as well as by the Trumpist right en masse.

The status of Vladimir Putin plays a crucial role in distinguishing the major variations.

For realists and neo-realists, the two most numerous sects among international relations theorists (Mearsheimer numbers among the latter), the well-documented fact that Vladimir Putin is a thug and a reactionary is almost entirely irrelevant.

The important question is how (or whether) China’s rise to the status of regional hegemon can be restrained.

Trumpist conservatives take a similar line, with some different points of emphasis.

For Donald Trump, as well as for his acolytes and toadies, the fact that Putin is a thug and a reactionary is a feature, not a bug, so to speak.

The Russian leader’s status as an avatar of white Christian manhood makes him a perfect ally for the fight against the enemy that they truly fear – China – not the EU or US.

Putin’s attacks on (and occasional murders of) journalists, liberals, gays and lesbians, and others unwilling to toe the line constitute examples of the right way of doing business.

What both approaches share is the view that the war in Ukraine was something that the United States (and NATO) in some sense stumbled into.

This point was made with perfect clarity this week by US Senator Rand Paul (R-KY), who grilled Secretary of State Anthony Blinken for this apparent failure, before adding some unfortunate comments justifying Russia’s policies.

The proposition that the American foreign policy establishment stumbled into this situation is simply risible.

For years, Vladimir Putin has made it clear he regards the former Warsaw Pact countries in Central and Eastern Europe as Russia’s sphere of influence.

The establishment of the Eurasian Economic Union (EEU) in 2015 (which was to have included Ukraine), to counter the European Union, is the most recent effort at replacing the Pact, with a single currency area in which Russian is the lingua franca.

Between the EEU, and the eight years of fighting between Russia and Ukraine since the 2014 Crimea invasion, it’s hard to imagine the State Department didn’t have a plan.

At the same time, it is difficult to imagine a deep state cabal assembling in Foggy Bottom and planning to attack Vladimir Putin using liberal democracy.

We’re in need of a middle point of some kind, one that can allow us to understand the connections between American policy since the collapse of the USSR, and today’s war.

At this point, a brief digression may clarify how this strategy came into play.

Žižek argued for the importance of “unknown knowns,” meaning this to characterise the way that ideology shapes thought in ways that are cognitive but not exactly conscious.

Perhaps this is relevant to the question of how the American foreign policy establishment has approached relations with Russia in the post-Cold War era.

The idea of a coherent anti-Russia policy seems as implausible as that of US foreign policy meandering from place to place and bumping into Vladimir Putin’s bad graces.

A more likely answer seems to lie in a combination of habit and the unknown (or unacknowledged) knowledge that the power of Russia was much more vulnerable than it might seem at first glance.

That American foreign policy and the national security establishment should see Russia as a foe rather than a potential ally is not hard to believe.

The seventy years between the founding and the collapse of the Soviet Union ingrained habits of thought and orientation which shaped both Americans and their government.

This seems to have cross-pollinated with the drive to promote liberal democracy that has driven US foreign policy since the end of the Second World War.

Putting aside the lip-service paid to the ideas of free people and free markets, the drive for liberal democracy is a means of promoting US hegemony.

War, after all, is not the only continuation of policy by other means.

Shaping states to engage in political and economic practices that suit one’s own is another method, one that Germany took thirty years and two catastrophic wars to figure out.

This is, and has been for some time, America’s favoured means of imperialism on the cheap.

As such, it’s infinitely preferable to the brutal, futile, and obscenely expensive military escapades in Iraq and Afghanistan.

If the folks in Langley, Foggy Bottom, and Fort Meade drew any conclusions from their errors, it was that the liberal democracy approach works best with Europeans.

For the rest, there remain the cruel and vexatious methods that have always been favoured by imperial powers.

The extension of liberal democracy is an article of faith for the White House, irrespective of the party in office. If this should annoy the less developed parts of Europe, so be it.

That the United States should become the backer of a proxy war in Ukraine is neither a mistake nor a matter of positive policy.

Rather, it is a “happy” accident, a foreseeable consequence of a broader US approach to politics.

To be clear, for American policymakers, there are very few downsides for the United States in the Russo-Ukrainian war, and possibly plenty of advantages.

Having just extricated itself from various quagmires in the Middle East, Washington can now happily watch as Vladimir Putin blunders into another in Eastern Europe.

Putin clearly thought that his foray into Ukraine would be a cakewalk.

That this has now cost thousands of Russian lives and billions of rubles worth of military kit must have come as a shock. But now Putin is in it and can’t back out for fear of losing face.

Russia’s vaunted military might, pumped hard to the press in recent years with its heavily promoted modernisation program, has turned out to be far weaker than anticipated.

Riding into Ukraine in vintage tanks and APCs, images of Russia’s invading force have looked eerily similar to footage of the wars in Afghanistan and Chechnya in the 1980s and 1990s.

The Russians are now stuck in a hostile country filled with people who a) hate them and b) view the invading force as white European imperialist equivalents, in typically Cold War fashion.

This latter point is crucial. Vladimir Putin’s claims of genocide against Ukraine’s ethnic Russian population, and denazification talk has framed the war as a racial conflict.

Russian massacres of civilians, in turn, have only served to reinforce the war’s ethnicisation, even though both invading Russian troops, and Ukrainians, come from diverse backgrounds,

This is to be deplored and is the sort of thing against which decent people ought to militate. But for the time frame relevant to policymakers, it is a fact.

To the extent that Putin’s strategic thinking can be parsed, it is clear that he hoped to achieve a quick victory and begin the process of people and governments forgetting about the victims.

This outcome is no longer in play. There’s no way Russia can govern Ukraine without liquidating vast swathes of the civilian population, which it has, according to reports, already been doing.

It is hard to imagine a workable post-invasion order that Moscow could sustain. A puppet on the model of Viktor Yanukovych is a no-go since Ukrainian demonstrators brought down his government.

How a Russian proxy government, even limited to the Donbas, much less in the country as a whole, could maintain itself without such violent repression is even less conceivable.

Vladimir Putin also lacks an effective way to prevent the EU and NATO from arming his opponents and otherwise discomfiting his projects.

Pace Lavrov’s warnings about nuclear weapons, the fundamental problem with that approach is that they only work if one’s opponent doesn’t have them. NATO does.

The threat of proportionate (or disproportionate retaliation) against even a limited use of nuclear weapons takes the costs on the balance sheet to stratospheric levels.

If the Kremlin thinks it will achieve deterrence this way, even, for example, by striking a wilderness area in Alaska, it has another thing coming.

The American response would be overwhelming and nullify any perceived benefits Moscow might have gained from such a show of force.

Russia’s international standing would take a century to recover, simply for having used a nuclear weapon for the first time since Hiroshima.

Even though it would prefer to avoid such an escalation, nuclear warfare would empower the United States in new and unforeseen ways, that could make permanent Washington’s unipolarity.

It might, of course, equally boost Western proponents of liberal democracy, but at a terrible cost.

Is this the error Rand Paul was faulting Biden for making? In terms of potential outcomes in engaging Russia, no. But in real-world terms, yes.

Many American policymakers still think this is the Cold War and can fight such conflicts without such dramatic consequences.

What we’re left with is a train wreck, sometimes playing out in slow motion, at other times coming together with lightning speed.

For the moment, the error is entirely of Moscow’s making. Vladimir Putin could just as easily end it. It is hard to imagine Russia surviving its present course otherwise.

And it’s impossible not to hear such worries in Sergey Lavrov’s warning of nuclear war.

Brexit will turn three on the last day of January, over six years since the 2016 referendum kickstarted Britain’s race to the bottom. END_OF_DOCUMENT_TOKEN_TO_BE_REPLACED

Be careful what you wish for. It may be a cliché, but it’s one the Greens are learning all over again. END_OF_DOCUMENT_TOKEN_TO_BE_REPLACED

Before his arrest, Andrew Tate was just another influencer with bad politics. END_OF_DOCUMENT_TOKEN_TO_BE_REPLACED