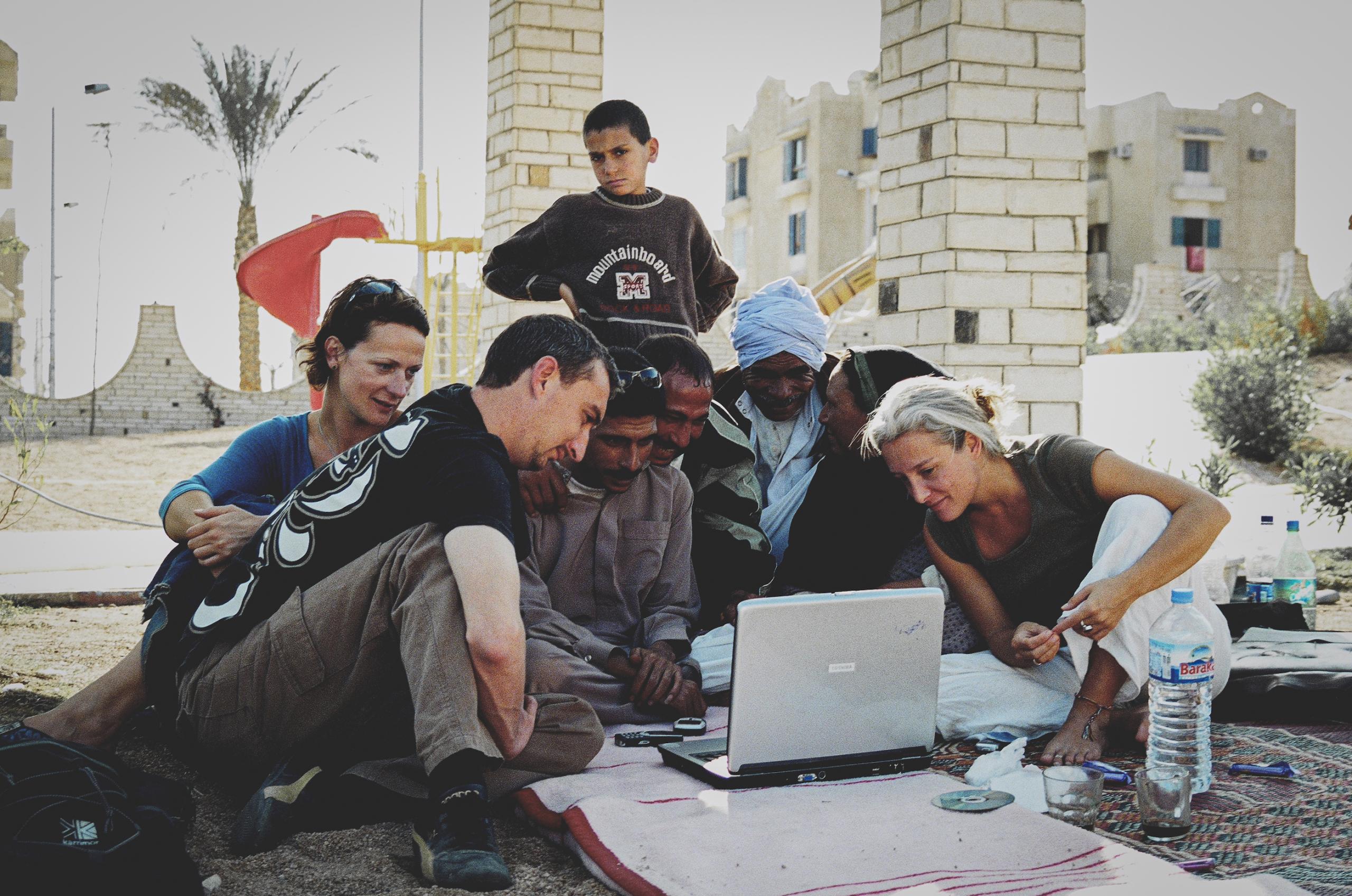 Brought together by Google. Bedouins and Europeans, Sinai.

First published by Argentinian novelist Jose Luis Borges in 1946, and subsequently riffed on by French philosopher Jean Baudrillard in the introduction to his 1981 treatise Simulacra and Simulation, its single paragraph describes a map so extensive, that it was indistinguishable from what it represented.

For Borges, the map was as useless as it was informative and was eventually abandoned to decay by subsequent generations. Baudrillard, in contrast, employed it as a trope to introduce the idea of a copy with no original.

At the present moment, with the Earth awash in data and with maps more extensive and precise than ever, the overall idea has another significance.

As Mark Graham and Martin Dittus argue in Geographies of Digital Exclusion: Data and Inequality, an objective and comprehensive cartography is an anachronism.

Every map is a subset of potentially available data on a particular place. Whether the curation is human, or algorithmic, or both, the results are only contextually intelligible.

Graham and Dittus illustrate this through an analysis that centres on Google and Wikipedia. A comparison of the data flows they facilitate provides a fertile resource to draw conclusions.

Geographies begins with a discussion of digital mapping. Google Maps is the default means of getting from place to place using smartphones, and Google Street View provides extensive coverage of North America and Europe, if rather less of other regions.

Wikipedia, the closest cognate of the age-old project of a comprehensive compilation of human knowledge, provides less in terms of fine-grained representation of particular localities.

However, Wikipedia has come to include ever-greater amounts of geolocation data to go along with descriptions of places that both overlap and diverge between subjects and linguistic groups.

The concept of mapping involves a fundamental conflict. On the one hand, mapping can be useful for purposes of disaster preparedness.

Knowing where populations are, the paths that connect them, and potential obstacles to reaching them can be crucial to providing aid in times of crisis.

But the possibility of observation brings with it the potential for surveillance.

While the possibility of acquiring information about people does not necessarily imply spying, being visible makes it possible to gather information on them, its uses are outside their control.

The status of Jerusalem is a case in point. One could, theoretically, describe the city as a collection of cartographic points.

But, any description of the metropolis that moves beyond this is enmeshed in one way or another in the territorial disputes of Israelis and Palestinians.

This is a particularly fraught example, but one which is by no means unique, or even unusual, except in the lethality of its consequences.

It’s also worth noting that the people who compile this kind of information tend to be concentrated in Europe and North America.

While this has changed somewhat (particularly in the case of Wikipedia), how they produce and curate information is reminiscent of the colonial regimes that prevailed a century ago.

What gets seen is a visual example of inequality in the world of information ecology. But the question of who gets to actually see it is a question of similar importance.

One of the selling points of the emergence of cyberspace was that it was meant to democratise access to information. As it turns out, the digital world is no flatter than the physical one, pace the dreams of pollyannas like Thomas Friedman.

At the risk of overextending the metaphor, there are toll booths on the information superhighway.

Information may or may not want to be free, depending on whom one asks. But the economic and technological characteristics of the Global North mean that information flows more readily to itself than to the Global South.

The preceding is a very general description of a work that, although brief brings to bear a wide range of perspectives from cartography and geography, but also sociology.

What emerges is an account of digital inequality that is not merely economic, or geographic, but systemic.

Platforms and the technologies they embody are produced in specific environments. The fact that certain groups have privileged access is not merely an issue of imbalance.

As the authors note, “assumptions about the world and how it can be represented through maps found in universalist mapping projects are not compatible with the range of ways human experience and understand space”.

Because the most fundamental problems here are at the level of the system, the solutions have to be at this level as well.

Given the opacity of entities such as Google, this suggestion is certainly well-taken, although the proprietary impulses of capital militate against this.

Likewise, the proposition that “processes of digital representation should have processes of accountability baked into them” is correct, but also highlights the complexity of the problem.

In an environment of sovereignties and capital encoding, assessing and enforcing accountability seems unlikely to be solved given the constraints of the system that currently exists

Still, this is a book with an important story to tell and some not unreasonable suggestions for how to fix the problems that it raises.

At times like this, it is well to remember that just because a problem doesn’t have an obvious solution, doesn’t mean it isn’t a problem.

Korean-German philosopher Byung Chul-Han is the quintessential postmodern figure. Having to come to Germany to study metallurgy, he switched fields and mastered the argot of German philosophy. END_OF_DOCUMENT_TOKEN_TO_BE_REPLACED

François Truffaut’s  The 400 Blows is one of cinema’s all-time classics, the 1959 film that demonstrated how deftly a new generation of French critics could transform themselves into the filmmakers of la nouvelle vague. END_OF_DOCUMENT_TOKEN_TO_BE_REPLACED

Everyone has something to say about the violence at the 2022 Oscars, whose host called “the greatest night in the history of television”. END_OF_DOCUMENT_TOKEN_TO_BE_REPLACED