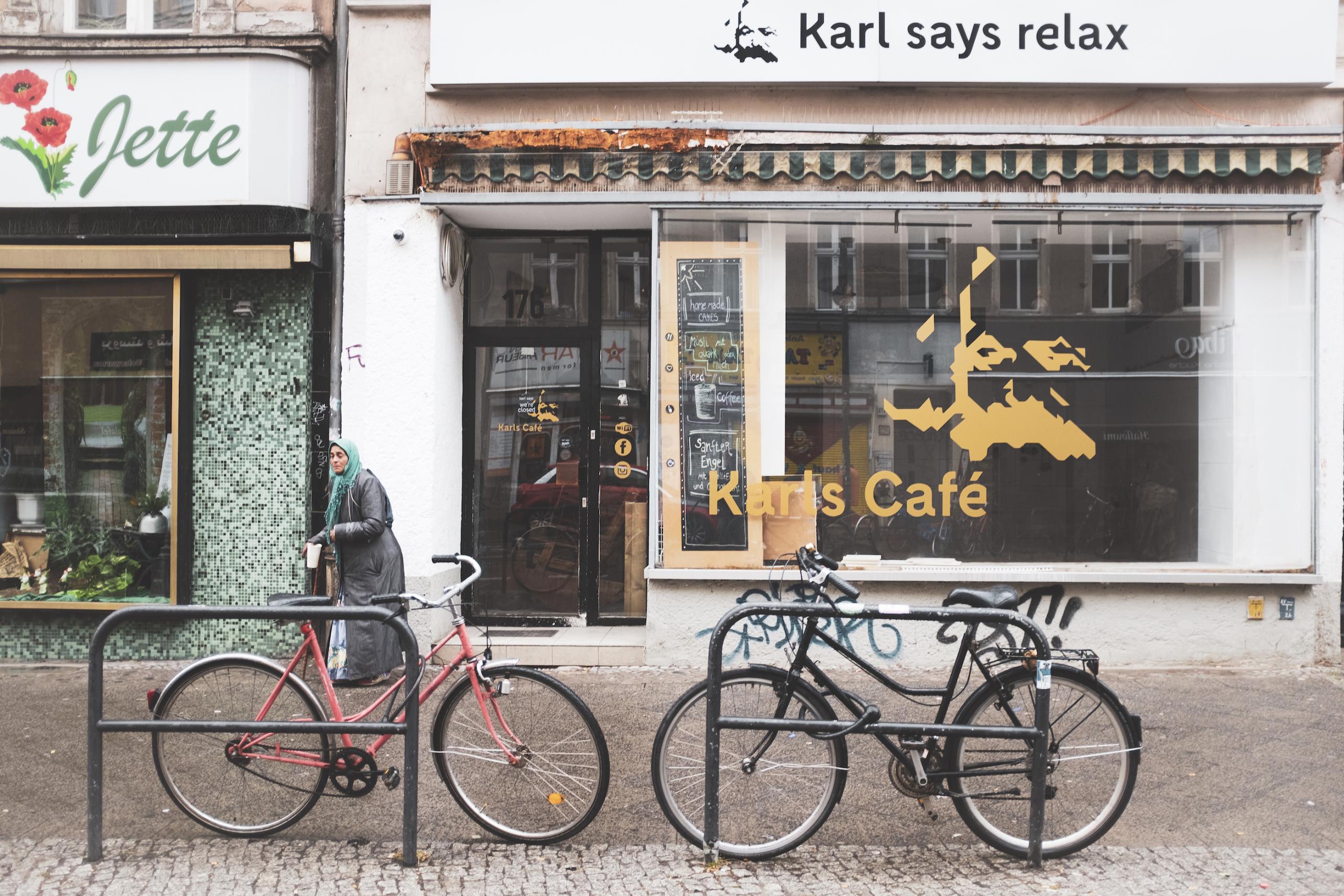 All that is solid melts into espresso. Karl-Marx-Straße, Berlin.

Chul-Han’s books are composed of short, thought-provoking passages (one hesitates to call them fragments) which suggest interesting ideas without following them through.

Perhaps this is the way of philosophy these days. One can hardly imagine a project such as Jurgen Habermas’ Theory of Communicative Action (1981) being pursued over multiple volumes to some sort of coherent and large-scale conclusion.

Rather, modern philosophy is a matter of inching one’s way toward a truth divorced from broader, meaning-bestowing narratives.

Byung Chul-Han’s take on this is pursued in a Deleuzian mode. In Hyperculture, first published in 2005 but only now available in English, Chul-Han traces the shapes of modern culture.

The reader is presented not so much with a system, as culture might at one point have been taken to be, but with a series of points in Cartesian space, with no up or down, no left or right.

Byung Chul-Han’s engagement with the work of Indian cultural theorist Homi K. Bhabha is emblematic of his project.

Bhaba is best known for his concept of hybridity, meaning indigenous cultures that have been transformed by colonialism, inspired by the impact British rule had on Indian society between 1757 and 1947.

While Chul-Han concedes that Bhabha’s concept is an advance on historic conceptions of culture as stable wholes, the Indian theorist nonetheless fails to grasp how modernity uprooted and decontextualised it outside the context of empire.

If this sounds disorienting, it is. Chul-Han provides a wealth of interesting observations about how the modernisation process has destabilised the ways in which we’ve historically thought about culture. But what is missing is an understanding of the dynamic that drove this process.

Byung Chul-Han harkens back to Karl Marx and Friedrich Engels’ often-quoted statement from The Communist Manifesto, “All that is solid melts into air” about the disruptiveness and secularising impact of capitalist modernisation.

Chul-Han, in turn, uses “disintegration” to describe the corrosive effects of neoliberal capitalism. There is no bright side to his remix.

The stripping of connections and cultural circuits out of their contexts is not a reflection of modernisation but a capitalism that seeks to eliminate any frictional restraints on accumulation.

Chul-Han is not the first postmodern thinker to recuperate this idea from Marxism. The late French sociologist Jean Baudrillard (1929-2007) also used it in his seminal 1970 book, The Consumer Society:

Once again, one can only agree with Galbraith (and others) that the freedom and sovereignty of the consumer are mystification pure and simple. This carefully sustained mystique (preserved first and foremost by economists) of individual satisfaction and choice, which is the culmination of a whole civilization of ‘freedom’, is the very ideology of the industrial system, justifying its arbitrary power and all the collective nuisances it generates: dirt, pollution, deculturation. In fact, the consumer is sovereign in a jungle of ugliness where freedom of choice has been forced upon him. The revised sequence (that is to say, the system of consumption) thus ideologically complements and continues the work of the electoral system. The drugstore and the polling booth, the loci of individual freedom, are also the system’s two mammary glands.

Byung Chul-Han’s book contains numerous fascinating aperçus, especially in his all-too-brief discussion of the differences in how culture is understood in Asia and the West. But he is limited to presenting a symptomology without the underlying causes that would make it meaningful.

Of course, one might argue that the very project of etiology is an attempt to reintroduce the linearity and meaning that hyperculture has transcended. To do so is to become obsessed with the symptom to the neurotic exclusion of its causes.

As the passage from Baudrillard indicates, it is by no means outside the ambit of postmodern thought to come to terms with the forces impelling modernity forward, even if one is determined to fetishise rootlessness.

Delightfully fun read of the day: Baudrillard’s The Consumer Society. “These are our valleys of Canaan where, in place of milk and honey, streams of neon flow down over ketchup and plastic.”

The failure to do so is among the most pronounced inconsistencies of social theory descended from the work of French philosopher Gilles Deleuze (1925-1995).

Talk of rhizomatic development and growth is all well and good. Likewise, attempts to discover modes of knowledge beyond a hackneyed and dying liberal culture are certainly valid. But the world is not turning out that way due to simple trajectories of capitalist development.

Hyperculture, as presented by Byung Chul-Han, is centred on a theory of nonlinear thought and development, one that might create a space for the creation of a multiculturalism that could unseat dominant economic and cultural powers.

But to do so requires the recognition that these powers exist and that they did not simply descend out of the ether but are, in fact, expressions of neoliberalism seeking to rationalise each fragment of culture for economic purposes.

Perhaps it is unfair to saddle Byung Chul-Han’s project with a politics like this. Might it not be enough to just understand neoliberalism this way and to glean from it a more accurate conception of culture as it actually exists, rather than politicising it?

Perhaps. One could read Chul-Han’s Hyperculture, like any of his other books, as a tourist guide-equivalent to the latest and greatest in postmodernity. But that would be to leave out half of the philosopher’s work, which is about politics, not just its aesthetics.

Indeed, that would mistake the forest for the trees and take neoliberalism’s decontextualisation of culture at its face value, as something that exists without economics, when it is entirely dependent on it. That’s why it is important to remember Marxism here.

The great failing of postmodernist thought is the belief that seeing below the patina of modern fragmentation provides a more realistic understanding of the world. But this promotes the fiction that the world is a work of art about which many stories could be told, each equally true.

Byung Chul-Han is an insightful student of modernity. However, his aestheticisation of a world shaped by capitalist projects of disintegration simply predicts what it is going to find, and settles for that, without disrupting the processes of exploitation which require his diagnosis.

No wonder so many hipster voyeurs and unpolitical, would-be philosophers find themselves attracted to Chul-Han’s work. Its fragmentary, aphoristic character lends itself to such appropriation, making it all too easy to overlook the leftist politics that drives it.

The Russian government is awarding prizes to Macedonian writers. END_OF_DOCUMENT_TOKEN_TO_BE_REPLACED

The 1970s was a decade of broken dreams. The end of the postwar boom brought to a close the era of middle-class liberalism in Europe and North America. END_OF_DOCUMENT_TOKEN_TO_BE_REPLACED