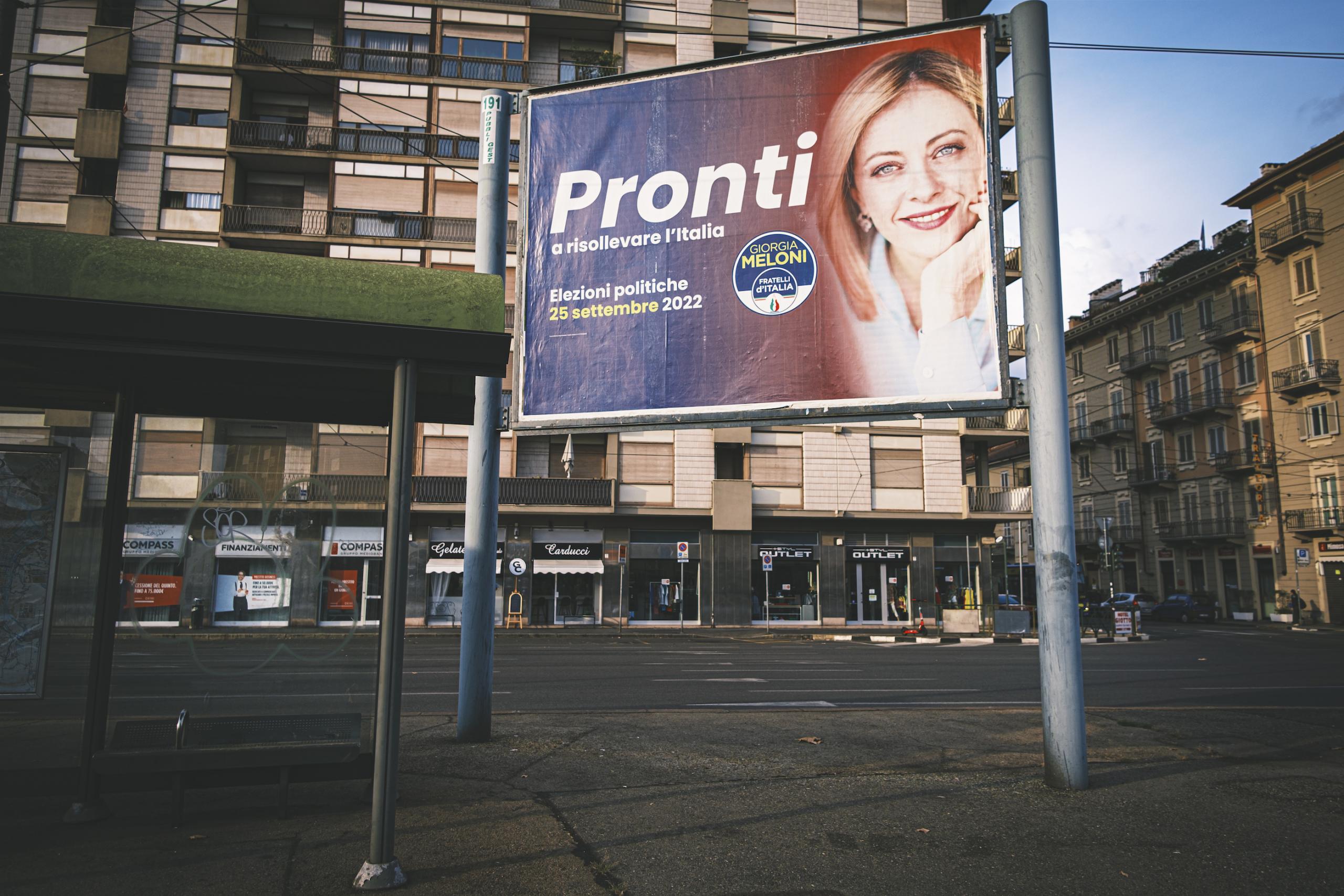 Judging by the hundreds of headlines to this effect, Meloni secured victory in July, when media began predicting her triumph following the collapse of Mario Draghi’s government.

We all know how winning campaign strategies work. With repetition, truth eventually accretes.

For both leftists and liberals, the actual vote, which will take place on Sunday, could install a largely pro-Moscow government, and a party so far to the right, it had to adopt “post-fascist” for cover.

Though Fratelli d’Italia (FdI) has declared its loyalty to NATO and the European Union, its rise, nevertheless, looks disturbingly like a return to the bad old days of Il Duce, Benito Mussolini.

Meloni’s platform is similarly threatening, but updated for the era of populism, with racism, anti-feminism, and homophobia its pillars, and great replacement theory its immigration policy.

Since the last Italian election in 2018, the FdI has come to dominate the Italian right, surpassing both the country’s largest far-right parties, the Lega Salvini and Silvio Berlusconi’s Forza Italia, in its popularity, in no small part due to the way that Italian fascism has come to be remembered.

This is a huge change. Not for Italian rightists, who have always been nostalgic for Mussolini, but politically. Since WWII, no fascist-positive party has ever gotten this close to power.

That’s why a little history is in order. 20th century far-right movements associated with the term fascism are distinguished in memory by the horrific acts of violence that they perpetrated.

From the crimes of Spanish dictator Francisco Franco, to the pogroms of Romania’s Iron Guard and the Croatian Ustaše, to its apotheosis in the Nazi Holocaust, fascism has been rightly associated with deeds and policies of unspeakable brutality.

And yet Italian fascism, the first and most long-running of these movements, has somehow mostly escaped, or at least been less definitively associated with violence as a political project.

The memory of fascism, its politics, and the manner in which it governed Italy is the subject of a timely book, Mussolini in Myth and Memory by the eminent scholar of Italian history, Paul Corner.

In an earlier monograph, 2012’s The Fascist Party and Popular Opinion in Mussolini’s Italy, Corner analysed the ways that fascism resolved the divisions of its early years, and how Italians related to the party in the era of its dominance.

What emerged was a picture of a regime struggling to resolve the contradictions between the violent dynamism of its founding period with the challenges of institutional government.

Mussolini in Myth and Memory dovetails effectively with this account. Its project is to scrutinize the ways in which memory of the fascist period has retrospectively absolved fascism of its crimes and presented its leaders as more competent (and honest) than was actually the case.

Corner’s book is timely for two reasons. First, as noted, the likely result of the upcoming Italian elections will be a far-right coalition led by a party that is at the very least fascism-adjacent.

In broader terms, the rise of national populism has brought discussions of what fascism is back into focus. Untangling the actuality of fascism from how it gets remembered is crucial.

When used as a descriptive term, instead of as the name of the political movement led by Mussolini, fascism is fraught with conceptual difficulties.

One can easily come up with a list of far-right organisations that share enough similarities in belief and iconography to be included in a conceptual family.

German National Socialism involves a similar mixture of these politics, although Nazism’s negative attitude toward Christianity went beyond the occasional anticlerical tendencies of other notionally fascist parties.

What all of these movements share is a commitment to the use of violence in politics, both for the repression of one’s enemies and as a means of regenerating and strengthening the state.

Much as the squadristi of early Italian fascism have come to be emblematic of violence as a political tactic (hence the use of the term blackshirt), Benito Mussolini has come to be remembered, both in Italy and elsewhere, as a canny and effective statesman whose only mistake was following Hitler down the path to war.

As Corner points out, the “one mistake” theory is only one of a number of historical inaccuracies in the way that Italian fascism has come to be remembered.

Violence is one such issue. Mussolini is often given a break for not attempting to liquidate entire ethnic groups on the scale of Hitler.

Nonetheless, his regime put rebellious Libyans in concentration camps, used chemical weapons in its colonization of Ethiopia and Albania, and executed 19,000 Ethiopian civilians as punishment for trying to kill the country’s Italian military governor.

Terror was an integral part of Mussolini’s rise to power, and domestic policies, which saw numerous opponents of his regime jailed and killed by security forces during his 23-year tenure.

The memory culture of Italian fascism has similarly sought to insulate the movement, its leaders, and the nation at large from complicity in the Nazi genocide. No more so, in some ways, than through the efforts of Giorgia Meloni, who has rebranded Il Duce’s legacy party centre-right.

While it is true that the Antisemitism of Italian fascism tended to focus more on culture than on biology than National Socialism did, the biological dimension was by no means absent.

Much is often made of the Italian army’s refusal to participate in the deportation of Jews from Italian territory, and there is an extensive literature, as there is for most European countries, focusing on the role of Italians as rescuers rather than persecutors of Jews.

It is less often remembered that the role of assisting the Nazis in the deportation of Italian Jews beginning in 1943 was taken up by police and fascist militias.

What emerges from Mussolini in Myth and Memory is a balanced picture of Benito Mussolini and of the regime that he led.

A seasoned scholar in this field, Corner expertly balances the task of chipping away at the accretion of falsehoods and forgetfulness, while not rushing to the opposite extreme by simply subsuming Italian fascism into the broader history of fascist movements.

The historian Richard White once wrote, “History is the enemy of memory.” Apart from purveyors of national hagiographies, historians tend to be rather unpopular. Facts have the tendency to ruin a good story, and historians are often simply viewed as killjoys.

History does not repeat itself and, at best, the past offers ambiguous guidance for confronting the problems of the present and the future.

Fratelli d’Italia is not the PNF and Giorgia Meloni is not Benito Mussolini. The vanity of simple or superficial comparison is easily seen in the vast differences between the immediate aftermath of World War I and the present day.

Meloni has argued that fascism has been “handed over to history” and claims that the Fratelli d’Italia’s DNA excluded “nostalgic fascists, racists or anti-Semites”.

But there is no mistaking the origins of her party in the Italian Social Movement (MSI), a party whose founders included former members of Mussolini’s government.

Giorgia Meloni has taken measures to make the FdI’s connections to fascism appear less pronounced. The party no longer stages dinners in honour of Mussolini.

But, looks can be deceiving. Mussolini’s granddaughter is a card-carrying member of the party. And, as this article went to press, several of its leaders were caught giving Roman salutes at a funeral in Milano, and praising Hitler in Palermo.

So, the break from the past goes only so far and certainly not far enough to alienate those for whom the memory of fascism is a fond one. Time is the crucial differentiator.

Meloni has publicly rejected Antisemitism and the racial laws passed by Mussolini’s government in 1938, but blames George Soros for bankrolling mass immigration, and can’t seem to stop herself from talking up the conspiracies of “globalists” like him, AKA, Jews.

For anyone who thinks Antisemitism won’t be encouraged by her government, it’s all right there. It’s not a question of if but when, given how important racism is to the FdI’s platform. Just listen to her go on about African migrants. Like many fascists, her xenophobia is all-inclusive.

Still, Giorgia Meloni is a canny politician. Hers is a politics that points to the positives in the memory of fascism while claiming to have moved beyond such failings.

Herein lies the kernel of the timeliness of Mussolini in Myth and Memory. The project of debunking the myths of Mussolini the great statesman and fascism as a mostly beneficent movement is key because his intellectual and political heirs are still aboard.

Fascism, as it actually governed Italy was a brutal and corrupt movement masquerading as a force for national rebirth and regeneration. Its politics was predicated on the violent exclusion of certain groups from the national community, and it hasn’t changed.

That it was not nearly as lethal as Hitlerism is about as low a bar as one could possibly imagine.

Walter Ruttmann’s 1927 film Berlin: Symphony of a Metropolis is strangely suited for these times, when traditional moviegoing is in perilous decline, providing a way to disentangle the art of cinema from that mode of consumption. END_OF_DOCUMENT_TOKEN_TO_BE_REPLACED

That the first song on Soulside’s new LP ends with a sample from a 1952 American civil defence film Duck and Cover, about a nuclear apocalypse, says it all. END_OF_DOCUMENT_TOKEN_TO_BE_REPLACED

Based on the flurry of academic titles about it over the last decade, punk has become as common to college curriculums as it is to the Top 40. Why this took so long is baffling. END_OF_DOCUMENT_TOKEN_TO_BE_REPLACED