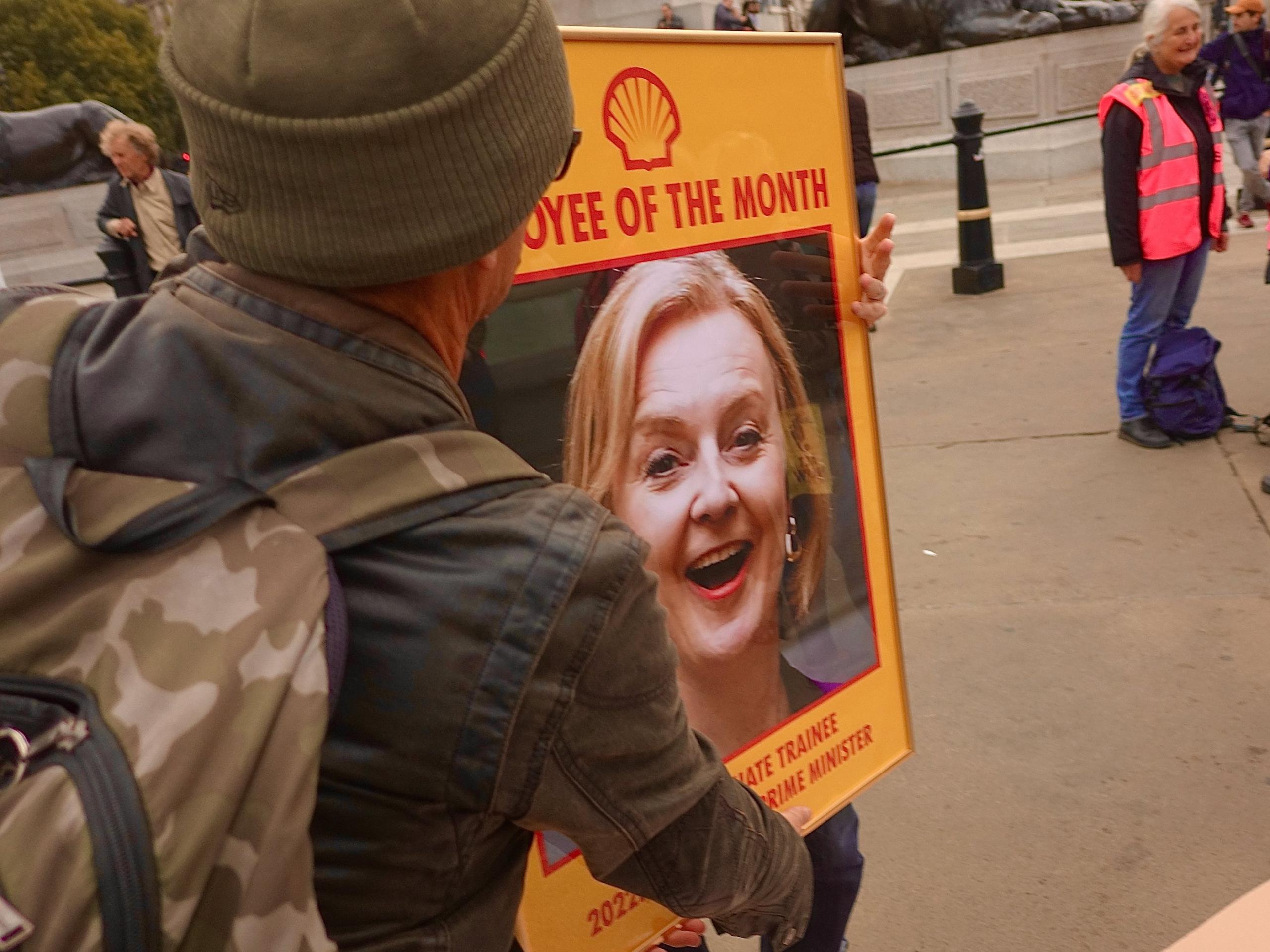 Enemy of the people. London, 14 October.

It’s an easy excuse for Liz Truss, for a party that’s run through three premiers in as many years.

From proposing fantasy budgets her own party wouldn’t back, to being heckled en masse in parliament, Truss exhibited a level of cluelessness unheard of in Western politics.

Even Donald Trump wasn’t this lacking in savoir-faire. At least he had offensive gaffes to fall back on. Comebacks, of any kind, are not part of Truss’ repertoire.

The Conservative leader’s fate illustrates the parlous straits into which the Tories have drifted since the Brexit referendum in 2016.

The sin started at birth. The vote resulted from a gross miscalculation by David Cameron.

It was meant to relieve pressure from Conservatives to his right and Nigel Farage. But it led to the departure of the UK from the EU and the near-collapse of the British economy, today.

Liz Truss came at the end of a series of increasingly incompetent figures thrown up by the Tories to try to make sense of the resulting mess.

Theresa May simply lacked the imagination needed to resolve the crisis. It didn’t help that her elevation coincided with that of Donald Trump.

At another time, a British premier might have counted on being able to fall back on the vaunted special relationship between the United Kingdom and the United States.

Donald Trump’s election threw all such calculations into a cocked hat.

May’s fall opened the way for Boris Johnson. His rise seemed to be grounds for reassertion of the long-debunked Stockholm Syndrome.

Theresa May had been unable to stomach Trump’s insinuation that any bilateral trade deal between the US and the UK would have to be predicated on a sale of the NHS.

Johnson’s tenure seemed to offer the solution of simply becoming the thing that one feared.

But Boris Johnson also lacked ideas, outside of an overweening and unenlightened self-interest. His downfall stemmed from his failure to protect himself from his own scandals.

This highlighted Johnson’s distance from Donald Trump as a role model, for whom ignoring political conventions works. When in trouble, divert the public’s attention.

And finally, there was Liz Truss, selected as (apparently) the least malign of the Tories’ incompetent leadership options.

Truss’ Thatcherite solutions might have worked in 1982. In 2022, they were a massive PR failure, that attracted scrutiny for all the right reasons.

Her inability to distinguish between the austerity rhetoric of the populist right and rational economic policies meant that she had to be dispatched at the earliest possible moment.

For all of his manifold shortcomings, it must be said of Trump that he never failed to understand the distinction between that which is owed to the people bankrolling you, and what voters want.

The latter are a lot more numerous, but can only be reached with the help of the former.

Trump’s deficiencies in demeanour and intellect should, by the traditional logic of politics in the Atlantic world, have disqualified him from high office long ago.

But, as the New York Times journalist Maggie Haberman has illustrated at length in her recent book Confidence Man, Donald Trump rejigged politics by applying the techniques of the real estate speculator to domains once thought to be sacrosanct.

Trump originally followed in the footsteps of his father Fred, who made his fortune developing housing projects in the outer boroughs of New York.

From the start, as Haberman notes, the younger Trump set his sights higher.

Early on, he learned the ways in which the world of speculation and development could be shaped by appearances and performances. Far more deals are suggested than made.

Goals are achieved by manipulation, often through the courts where the skills of lawyers, and experts in the encoding of law and property, could achieve benefits not available to those without the capital to realise them.

Most of the content of Haberman’s book is previously known, although this is the first book to compile it with this degree of thoroughness.

Taken together, the narrative has an effect similar to watching one of those traffic safety films from the 1950s in which the dangers of drunk or inattentive driving were illustrated in gory detail.

Reading Confidence Man, one often wants to look away, yet prurient curiosity prevents it.

Donald Trump’s career in business and politics makes clear the degree to which rentier capitalism has become the dominant mode.

The rentier variant is one particularly suited to unreality. Trump is the perfect avatar of this.

Haberman presents Trump as a canny businessman, but his reputation for cleverness is based on falsifying the value of his assets, subsidies acquired from others, and failure to pay people and organisations working for him.

They contrast particularly with those of someone like Angela Merkel who, during sixteen years as Germany’s Chancellor, came as close as anyone ever will to being Europe’s superego.

The newness of Trump’s politics is that it is, in an important sense, post-ideological. Trump has no ideology outside of self-aggrandisement.

The picture of his internal life that can be gleaned from Haberman’s book suggests the stereotypical image of the sociopath constantly trying to figure out what it is that people around him think, and what will seem normal to them.

Trump is post-ideological simply because he lacks consistent ideas.

While there are ideologies that swirl around him, his own thinking appears to be a pastiche superimposed on a purely transactional view of human conduct and motivation.

The difference between Donald Trump and Liz Truss could not be starker. Both claim to be cold-eyed realists.

Trump’s deviations from this have tended to be of the consequence-free variety.  His much-ballyhooed border wall project is a case in point.

While not addressing the issue of immigration in any serious way, it made for good optics.

Truss’ failure of realism resulted in her taking right-wing nostrums about tax cuts for the wealthy seriously. They never propel growth or investment or trickle down to the poor.

While Donald Trump was able to spin out one vague idea after another, not requiring serious economic changes, Truss’s mini-budget threatened the wealthy, and the middle and lower-middle-class mortgage holders who constitute the Tory base.

If there is a lesson to be learned here, it is that less is more.

Boris Johnson is reported to have returned from vacationing in the Caribbean on Friday, to try to engineer one of the more improbable returns to power in modern European history.

Given Johnson’s disastrous term in office, it’s up in the air whether he’ll be able to muster the support of the 100 MPs required to get on the ballot.

As of the time of this article’s writing, Rishi Sunak claimed he had 90 MPs behind him already, while, according to The Guardian, his supporters claimed he’d passed the 100 mark already.

Why anyone in the Tories would want the premiership right now, given how badly they’re doing in the polls (21% to 53% for Labour) testifies to how out of touch the party leadership is.

Given the current situation of the post-Brexit UK economy, it’s unlikely Boris Johnson or anyone else currently in the Conservatives will be able to effect serious repairs before the next election.

At that point, if not before, someone will have to be sacrificed, assuming Keir Starmer continues on his quest to remake Labour a free market Brexit party.

But the larger question is whether British politics will continue to follow the Trumpian model. It is hard to see how it would not.

Convincing those below the 98th percentile of the income distribution to vote for the Tories requires prompting them to vote against their own short and medium-term economic interest.

So far, that’s exactly what UK voters have done. Without any alternatives to the Conservatives, why do anything differently? Voters seldom break out of such vortexes.

That’s why Donald Trump’s ‘post-ideological’ policies have a decent track record of getting people to shoot themselves in the feet, at least in the US.

The US is not the UK. But it does suffer from many of the same problems, including declining rates of growth, stagnating incomes, rising inequality, and an ageing workforce.

These are problems for which there are technical solutions. Whether those commend themselves to politicians in power is another matter.

Since the 1970s, the Anglo-American right has made a point of systematically ignoring these solutions in favour of zombie economics and xenophobia.

Unmoored from Europe and lacking the friendly backstop of the old special relationship with the United States, Britain needs more of a realist in power than ever than leaders with politics like this.

With neither the Conservative Party nor Labour capable of offering that kind of leadership, whoever comes next – Johnson, or Rishi Sunak – will simply supply more of the same.

Their challenge will be not to make any changes in the menu like Truss tried to do. She may have been playing to her sponsors. The problem was that it was all too obvious, even for them.

Best to adhere to the same class politics, but find a more subtle way to do them next time.

The conflict between Russia and Ukraine continues with no end in sight. END_OF_DOCUMENT_TOKEN_TO_BE_REPLACED

Some websites make the news, others make headlines. END_OF_DOCUMENT_TOKEN_TO_BE_REPLACED