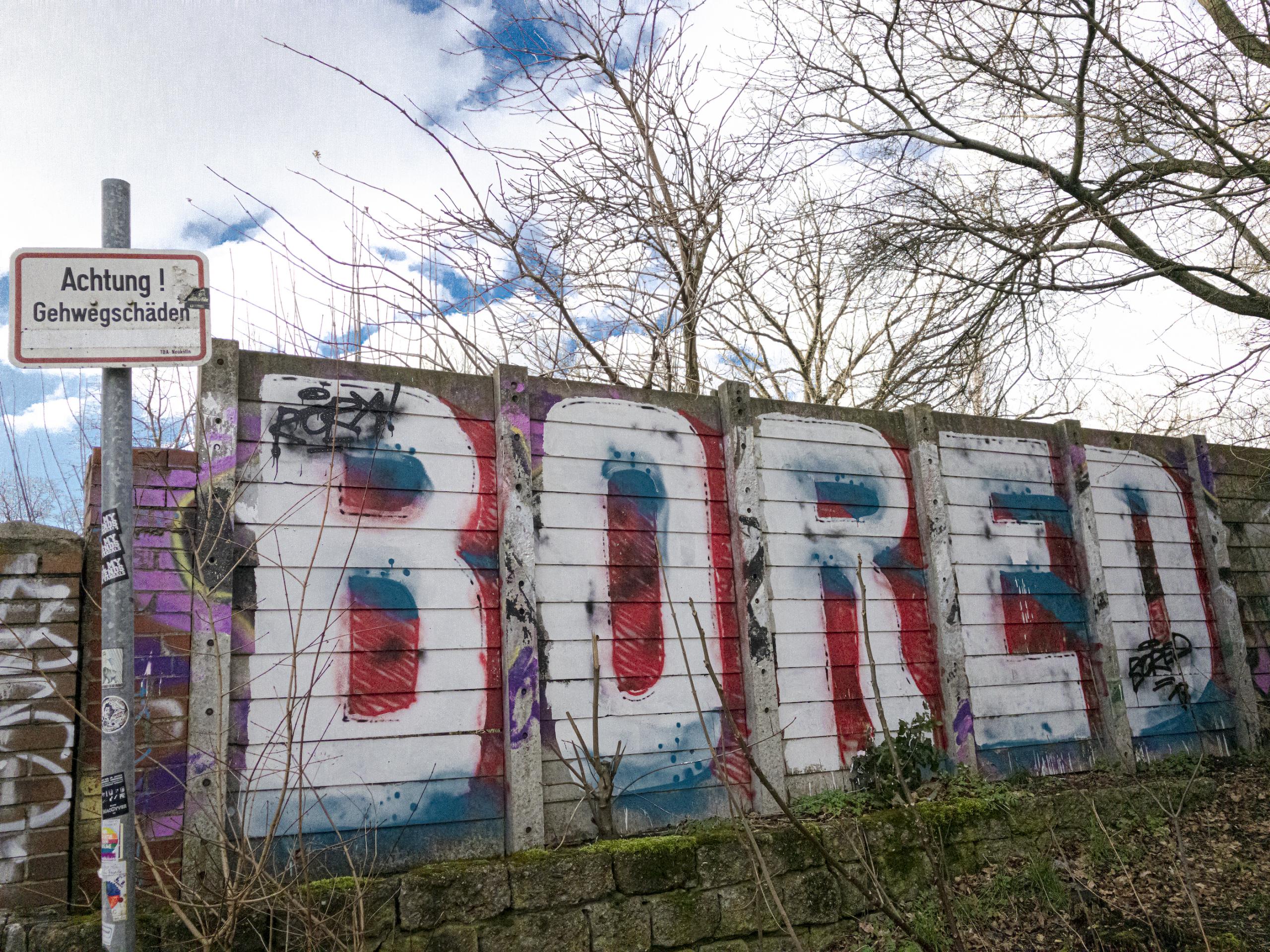 Punk in every language. Neukölln, Berlin.

The first scholarly book on the subject – Dick Hebdige’s Subculture: The Meaning of a Style – appeared as early as 1979, two years after the Sex Pistols first released Never Mind the Bollocks.

Blame it on punk’s oppositional status and its persistence in youth culture. Despite its early notoriety, for nearly three decades, it was left alone to teens and twentysomethings to sort out.

But that’s precisely why it integrated into the ivory tower so well. Few areas of postwar life have been as ripe for dissection as punk’s youth-driven mixes of music and politics.

Culture from the Slums: Punk Rock in East and West Germany, by Wichita State University historian Jeff Hayton, is an essential contribution to this growing literature.

Originally a dissertation, Culture from the Slums is very much an academic study, particularly in contrast to its companion volume, Tim Mohr’s oral history of East German punk, Burning Down the Haus: Punk Rock, Revolution, and the Fall of the Berlin Wall.

Culture from the Slums shows its academic bona fides in its scope, covering both sides of the Cold War divide as has been the general practice in much of the historiography of Germany written in the last two decades.

But it is also scholarly concerning the questions that it seeks to answer.

Where Mohr’s book provided a street-level narrative, tracing punk in East Germany from its earliest origins to its role in the collapse of the German Democratic Republic, Hayton attempts to locate German punk in the phenomenon of punk more generally.

It was not all that long ago that this question was not generally viewed as relevant, at least from the perspective of serious scholarship.

Beginning in the 1990s, when books about punk started to get published, writing on the topic was mostly in the nature of memoirs, such as John Lydon’s Rotten: No Irish, No Blacks, No Dogs and Henry Rollins’ Get in the Van. This literature has continued to grow and to quite good effect.

Starting from the experiences of seminal figures in London, New York, and Los Angeles, it’s grown to encompass regional titles, such as Aaron Cometbus and Scott Satterwhite’s A Punk House in the Deep South, and Latina feminists, like Michelle Cruz Gonzalez’ The Spitboy Rule.

Much as this literature added greatly to our knowledge of punk, it does not cast much light on the question of what punk is in at least two respects.

The first is that the people writing it focused on other things — making music, fanzines, or living out the scene lifestyle.

To the extent that the question was ever asked during the late 1970s and 1980s, either in casual conversation or in the pages of major ‘zines such as Sniffin’ Glue and Maximum RocknRoll, it was of secondary importance.

Everyone knew what punk wasn’t, though. It wasn’t a movement with some sort of coherent ideology or collective goal. But it was, in a positive sense, a question to which most people didn’t need an answer.

As punk has become a subject of academic interest, this question has become an important one. Punk made its first entrée into the scholarly world in the work of the Birmingham School through books like Dick Hebdige’s aforementioned Subculture.

This academic coterie, associated with the Center for Contemporary Cultural Studies at the University of Birmingham, was well prepared, as it had been researching the rise and influence of youth cultures in the United Kingdom since the 1960s when punk first appeared in the mid-70s.

Punk joined the range of British subcultures, including Mods, Rockers, Teddy Boys, and Skinheads, that the Birmingham School undertook to explain.

Influenced by Marxism but also moving away from it, the School was caught up in the search for historical actors to fill the role of the proletariat, whose less conflictual relations with the capitalist order of the postwar boom led to doubts it was the gravedigger of capitalism.

Beginning in the 1960s, a significant amount of ink was spilt by scholars on the left examining the question of whom the new agent of historical transformation was going to be.

Frankfurt School philosopher Herbert Marcuse thought it might be women, arguing in his later work that the feminism that took shape in the late 1960s might take over the forward march of history.

Less convincingly, and often with unfortunate consequences, many nominated the student movements of the 1960s. This presented numerous problems, not the least of which was that students, unlike women, were more privileged than marginalised.

Not being, at least in most cases, subjects of actual repression, European and American university students also lacked a coherent oppositional experience or the consciousness that might grow out of it.

The ultimate decadence of student radicalism would become clear in the 1970s when many of those who had participated in the movements of the previous decade either fell into the faux radicalism of the Weathermen and the Red Army Faction or dropped out of politics altogether.

For leftists searching for an ersatz proletariat, neither terrorism nor bourgeois apathy fit the bill.

Punk, which had many antecedents, originated in independent (and substantially culturally different) scenes in New York and London.

It was the latter that would catch the eye of the media, as first the Sex Pistols, and later The Clash, The Damned, and similar bands would turn a combination art project and clothing marketing scheme into a significant cultural phenomenon.

For the Birmingham School, punk, which had a strongly oppositional element, constituted yet another candidate for the job of the leading edge of anticapitalism.

But whatever punk was, it certainly wasn’t that. The origins of the Sex Pistols as a roving ad for Malcolm McLaren and Vivienne Westwood’s King’s Road boutique, the appropriately branded Sex, put paid to that idea.

But it was also clear that there was an underlying something there. Culture from the Slums adds clarity to the question of what that something was.

Jeff Hayton traces punk’s transition from the UK to Germany in both East and West. Scenes in the two countries were very much distinct, shaped by local political and cultural conditions.

In West Germany, punk became a mini-me version of the British original, with many of the same cultural and musical tropes and evincing a similar trajectory.

One fascinating example of the ways that West German punk mirrored dynamics from other places was the split between those wanting to take punk in a more artistic direction (so-called Kunstpunks) and those committed to a more straight rock orientation both among the original punks and those that would populate the hardcore scene of the 1980s.

This can be seen as an almost exact parallel of development in Los Angeles. There, as can be found in the texts collected in John Doe’s edited collection, Under the Big Black Sun, a profound split divided the community.

LA’s early scene was centred in the decrepit centre of the city. While there were some harder rocking acts associated with it (X, The Germs), there was also a pronounced element of arty nerdiness, exemplified in bands such as The Weirdos and The Screamers.

Los Angeles punk changed profoundly in the early 1980s, as the confines of central LA were increasingly invaded by kids and bands from Huntington Beach (Black Flag, the Circle Jerks) whose music and behaviour was more aggressive. Ultimately, they would define the transition from the original punk scene to the hardcore scene.

This dynamic did not manifest itself in East Germany. There, punk was generally on the defensive merely to survive in the face of repression by the state.

One of the most interesting and valuable aspects of Hayton’s book is that it takes the story beyond the early instances of punk in the late 1970s and its various outgrowths and traces the emergence of the German hardcore scene, which would carry the impetus of punk forward through the 1980s.

This, too was a parallel with other places. In Britain, as bands from the original punk era either died out (the Pistols), broke up (Crass) or achieved commercial success (The Clash), new groups populated the space.

Bands such as Discharge, Disorder, and Chaos UK became drivers in a more politically engaged scene (in contrast to the primarily sloganistic politics of the original punk phenomenon) and musically aggressive.

In East Germany, this was very much as it always had been. Although there were some more artistic elements, punk in the GDR was similar from the outset to what would arise in the context of the hardcore scene.

What caused it to disintegrate was less that some of the bands achieved popular acceptance and more a combination of infiltration by the Stasi and the collapse of East Germany itself.

One particularly interesting aspect of the research underlying both Culture from the Slums and Burning Down the Haus is that a lot more information is available about East German punk because it was being so extensively engaged by the security forces.

This engagement left residual documentary traces which are simply not available for its West German counterpart.

The hardcore scene as it arose in West Germany was very much of a piece with that in the United Kingdom. The music emphasised the simpler, harsher elements of earlier punk.

The politics were more anarchist in character, with smaller DiY labels releasing material that would never be touched by EMI or CBS.

Bands such as Slime (Hamburg), Inferno (Augsburg), and Upright Citizens (Bottrop) played music that was simple and intense. They forged connections with punks in other countries, as hardcore underwent a sort of grassroots globalization.

Upright Citizens would eventually have a record released by BYO, the American label formed by members of the LA punk band Youth Brigade. Around the same time, Inferno released a split LP with the Japanese band The Execute on a label run by artist Brian Schroeder, AKA Pushead.

Culture from the Slums provides a wealth of interesting information and is particularly valuable because it provides a window into the enormous literature on German punk that has not made it into English translation.

Hayton’s accounts of the ways East German punks thought of them themselves and what they were doing is the most useful aspect of this book. For these Ossies, punk was just a series of overlapping communities which provided safe spaces to be different.

This might be the point at which scholarly and participant histories of punk overlap. Punk was never a movement. It never had an ideology, except an amorphous (and often imperfectly practised) dictum to live a life different from the one that was expected.

For East Germans who played a part in those scenes, and for those who continue to live in the underground to which they gave rise, that space constituted a revolution. And at least provisionally, it was one that actually achieved victory, at least of a kind. 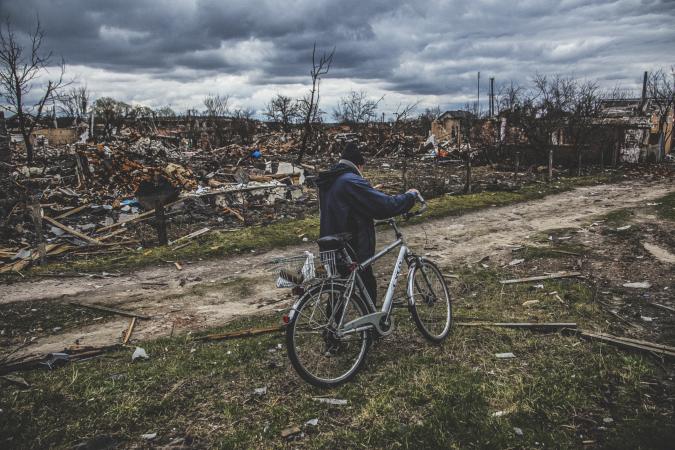 On their debut full-length Web of Lies/Death Won’t Even Satisfy, AMMO reminds us that hardcore punk can embrace more musical diversity than we tend to think. END_OF_DOCUMENT_TOKEN_TO_BE_REPLACED 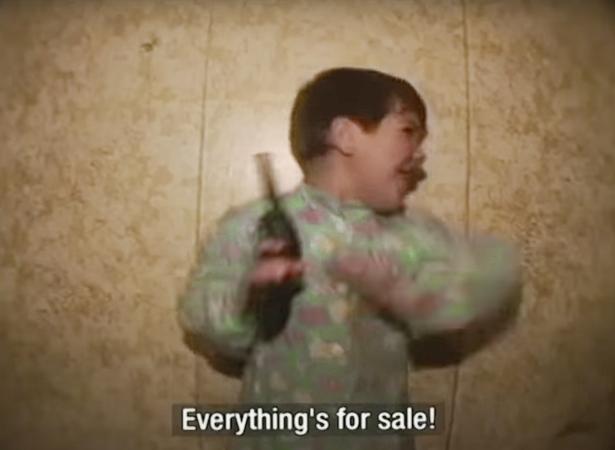 Adam Curtis is a collagist who deals with ideas and their emotional impact. END_OF_DOCUMENT_TOKEN_TO_BE_REPLACED

Walter Ruttmann’s 1927 film Berlin: Symphony of a Metropolis is strangely suited for these times, when traditional moviegoing is in perilous decline, providing a way to disentangle the art of cinema from that mode of consumption. END_OF_DOCUMENT_TOKEN_TO_BE_REPLACED