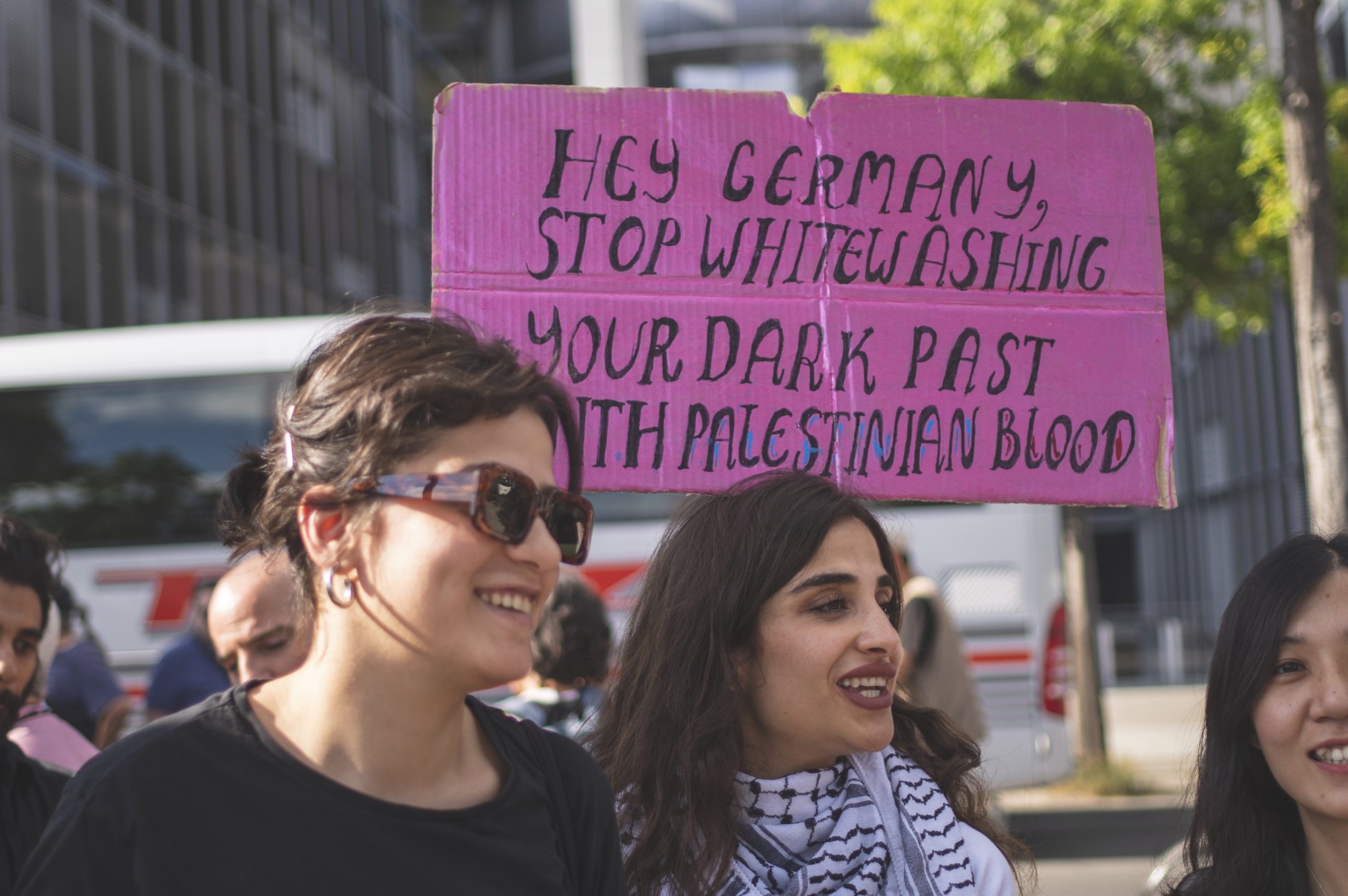 The Ramsis Kilani Interview, Part I

Ramsis Kilani is not a well-known name. But, for members of Germany’s Palestinian community, and anti-occupation activists in the country, it’s a different story.

A graduate student based in Siegen, the story of Kilani’s family is the subject of the 2019 documentary Not Just Your Picture, by Dror Dayan and Anne Paq.

In 2014, during Operation Protective Edge, Ramsis’ father, Ibrahim, a German citizen, along with his second wife, Taghreed, and their five children, were killed in an Israeli air strike on Gaza City.

Not Just Your Picture recounts the politicisation of the German-born Ramsis and his sister, Layla, as they come to grips with the tragedy and and seek justice in Israeli and German courts.

Award-winning Haaretz correspondent Amira Hass called the documentary a blow against censorship: “Watching the film is an opportunity to participate in an act of civil disobedience,” she wrote.

Kilani’s conversation with Wieland Hoban that follows is no different. First published in December 2020 by Jüdische Stimme (Jewish Voice,) Hoban translated the interview for The Battleground.

Don’t be fooled. This is not just about the Israeli-Palestinian conflict. It’s also about how the crisis influences German diversity politics .

Wieland Hoban: You’ve been politically active for a while. How did that come about?

Ramsis Kilani: My father was on the left too, but we never really talked about it. I know that there were several Nazi marches here in Siegen during my youth, and that I wanted to get involved against Nazis and fascism. First of all out of a rather identitarian impulse – they were against me as a non-white, non-“German” person, that is, from a migrant background.

Wieland Hoban: So you were aware of this status as an “other” early on?

Ramsis Kilani: Yes, definitely. I was always aware of it, in fact from earliest childhood, and that was what led me to go to my first anti-Nazi demo. But back then I was more “gut left”, i.e. I already saw myself as being on the left, but I didn’t really know what that meant.

The theory came later, especially about the Palestine issue, after I’d read some things and considered which arguments convinced me the most and which corresponded to the experiences I had in Palestine myself, but especially to the stories told by our Palestinian friends and relatives.

Wieland Hoban: So you’d say that you only came to things like Marxist theory via the Palestine issue?

Ramsis Kilani: Yes, definitely. And then I started reading a wider range of Marxist classics, also on the question of fascism and anti-fascism. So they were questions that had already preoccupied me before – racism, anti-racism and so on.

Above all, there was one movement, internationalist socialism, that put me under its spell. And I got deeper into that through the question of Palestine and the tragedy, the deaths of my family.

Wieland Hoban: I find the direction of this development very interesting, because the Palestine issue isn’t primarily about class structures, materialism and so on. What stands out is more this fundamental humanist feeling of injustice.

Ramsis Kilani: Yes, I think that’s crucial too. To feel solidarity with obviously oppressed people out of that moral gut feeling.

From my own experiences and those of my father, I could never have concluded that the Palestinian population isn’t oppressed. You can’t tell that to anyone who grows up in that context.

Wieland Hoban: You grew up in a German-Palestinian family, so there was always a mixed perspective, there wasn’t any sense of Arabs against non-Arabs.

Ramsis Kilani: Yes, but I think the conflict is perceived that way by many people on the outside – that people have been smashing each other’s heads in for centuries about religion. It leads to a feeling of powerlessness, that one can’t do anything anyway and it’ll go on forever.

Wieland Hoban: The class angle is often missing in the anti-racism discourse. Sometimes the debate is only framed in terms of identity.

Ramsis Kilani: Yes, but I think you can point out the connections. For example, when it comes to racism, the majority of people who suffer from racism are relatively low in the class system, often have the most precarious occupations, and are disproportionately affected by poverty and homelessness.

Or when it comes to feminism – even during the corona crisis, most of the people who had to keep the retail sector going, the critical sector, hospitals, care etc. were women.

I think you can use these points to bring the whole thing down to a class question. It’s just a lot more complex today, sometimes you can’t see the forest for the trees, but it’s possible if you combine these struggles and highlight what’s essential.

I think that this whole movement, with migrant self-organisation, Black Lives Matter and everything else, came together in a way that also has potential for other oppressed people. The Palestine issue is about racism too, but people aren’t so aware of that.

The fact that efforts have been made by various Palestinian-Germans to organise, for example Palestine Speaks, is a development which gives hope that this question will also be part of it, though in Germany there are always certain limits.

Wieland Hoban: As we saw with the group Migrantifa Hessen, who were accused of tolerating Antisemitism at a demonstration they helped organise because of some pro-Palestinian chants.

Ramsis Kilani: Yes, we saw how strong the pressure is whenever it comes to the fact that Palestinian people also have human rights, that they should be treated with the same rights as other people. There’s always a limit, even in parts of the so-called “left” in Germany.

Wieland Hoban: It’s increasingly understood that different types of discrimination are connected, that it’s inconsistent to be against the discrimination of one group but not of the other. But Palestinians often aren’t included in this intersectional thinking.

Ramsis Kilani: Yes, absolutely. And it’s precisely in those currents and schools of thought that it’s so important for the people concerned to have their own say and present their experiences. But when Palestinian people talk about their experiences, that’s Antisemitism.

(Palestinians are) excluded and played off against others via these mechanisms, as if the fight for one minority is a fight against another, against the Jewish minority here in Germany – or not even really here in Germany, but what’s seen in Germany, even in parts of the left, as the “new Jew”, i.e. Israel.

Wieland Hoban: In Germany, Jews are something abstract, something exotic for most people. They exist mainly in history, which is of course extremely guilt-laden, and many Germans lack an understanding that Jewish people and the so-called Jewish state are not the same thing.

Ramsis Kilani: Yes, there’s always this historically static generalisation of Jewish people and Zionism, Israel and Jewishness are all equated.

I think many factors aren’t seen, including the interests of one’s own state, and the perspectives of real, live Jewish people, who aren’t abstract, but who are easily silenced in these issues and discourses.

Wieland Hoban: Our organisation (Jewish Voice) has certainly experienced that, because it’s assumed that the Central Council of Jews defines what’s acceptable for Jews and what can be said. And one sees how a section of white, non-Jewish society claims the authority to define what Antisemitism is and how to fight it.

Ramsis Kilani: And who’s been cleansed of it. In a kind of perversion, they build a bridge via Holocaust guilt and the unfinished processing of that guilt. As a result, today’s Germans have learned from history and are cleansed of Antisemitism.

Those people then tell Jews, even descendants of Holocaust survivors, that they’re actually the Antisemites of today and that they’re comparable to the Nazi regime. That’s a real twisting of reality, and almost creates a positive connection to the Holocaust because it’s purified you.

Wieland Hoban: And if someone is critical, they’re standing in the way of that purification, that redemption.

Ramsis Kilani: Yes, it’s perceived as a direct attack on one’s own national consciousness, even if most of them don’t entirely realise that it’s about German identity.

Wieland Hoban: What happens to their identity if they can’t wash themselves clean? That’s the moral problem, but also the intellectual problem, because they just don’t understand what factors are at play.

Ramsis Kilani: There are some people who represent that and feel this national consciousness very strongly, but there’s also a large number who are simply intimidated by such people and don’t want to be called Antisemites.

That’s the biggest problem here, that it prevents any generation of knowledge and experience about these things, and brutal action gets taken against people who deal with it more intensely.

It becomes clear fairly quickly who’s actually oppressed in this conflict, and the climate that’s now been created blocks the path to solidarity for many people. Because they’re just afraid.

Wieland Hoban: That divides the left. We saw at the beginning of October how, after one demonstration in Frankfurt, there was a conflict between two groups, Migrantifa Hessen and Free Palestine FFM. Migrantifa was scared out of its initial solidarity by the intervention of politicians.

For people like us, it’s rather old hat to be called Antisemites. The novelty has worn off a bit. But I think it was quite a shock to them even to be accused of tolerating Antisemitism.

Ramsis Kilani: For sure. One mustn’t forget what it feels like, how intimidating it is for people who are newly politicised, who are against racism and think that of course that includes Palestinian people too, if they’re described as Antisemitic.

There’s a completely different hegemony within the migrant left compared to the non-migrant German left when it comes to this issue.