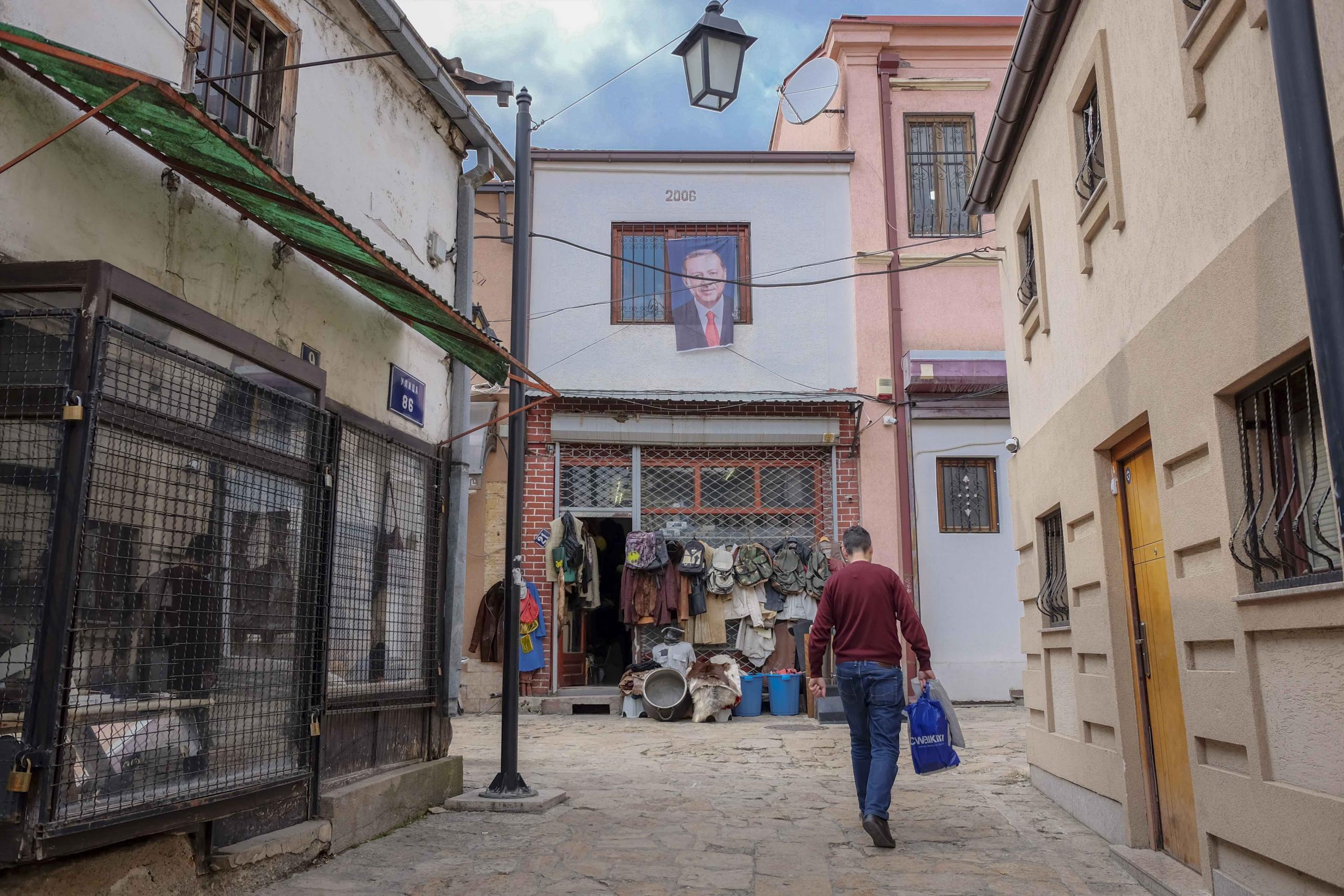 Whether he’s in Armenia or Hungary, Kosovo, or Ukraine, the British journalist always finds himself a story.

Not just any story, but monographs, snapshots of countries on Europe’s margins undergoing seismic political changes. With bylines appearing everywhere from The Atlantic and The Guardian to Haaretz and Politico, Maxim Edwards is impossible to miss these days. And with good reason.

The first of a two-part interview about his work, Edwards starts out his travelogue-equivalent in Slovakia, only to conclude in Armenia.

Battleground: Zuzana Čaputová’s victory, in the March presidential elections in Slovakia, conflict with preconceptions of Central European politics, in many of the same ways as Volodymyr Zelensky’s win last weekend in Ukraine. Specifically, her identity politics, which reach out to minorities like the Roma. Is there a parallel here, or is this a reflection of other political factors in Slovakia, such as increasing Westernisation?

Maxim Edwards (ME): A parallel between Čaputová and Zelensky is that their “populism” is a backlash to corruption and un-accountability rather than against migrants or racialised “others.” Both of them avoided playing the identity card, ethnic or religious. They do represent anti-establishment feeling but in a very different context.

Remember that what Western Europeans might identify as “populist” politicking has long been a popular tool of political establishments across Eastern Europe. What would you call Poroshenko’s “commander in chief” tubthumping in the Ukrainian election? Or Tymoshenko’s promises to unilaterally cut utility bills? Or even Slovak PM Robert Fico’s anti-migrant and anti-Soros rhetoric in recent years?

These are all people deeply associated with “Politics As Normal” in Central and Eastern Europe, berating their opponents with the popular buzzword of “populism”. So Čaputová and Zelensky seem to be anti-establishment politicians in societies where the political elite have played populist rhetoric like a broken record.

Čaputová’s victory seemed to be closely linked to the mass public outrage following last year’s murder of investigative journalist Jan Kuciak and his fiancee Marta Kusnirova. That really shocked Slovakia, and I supposed it mobilised sympathy to Čaputová from the media and civil society. But yes, Čaputová is a different kind of politician, and she’s also a single mother who holds progressive views on LGBT rights in what is still quite a socially conservative country. I don’t know whether support for her was entirely a reflection of voters’ leanings on those issues, or just not choosing to prioritise them at the ballot box over the rule of law or corruption.

Also, bear in mind that the second round had a turnout of just over 40%. And who was Čaputová’s challenger? Maroš Šefčovič, a former European Commissioner. You have to wonder whether many of the more socially conservative voters disaffected with Brussels chose to stay at home instead. Her victory is important, but the presidency is largely ceremonial in Slovakia, and the real test will come during next year’s parliamentary elections.

Who knows? Maybe Čaputová could end up like [Austrian President] Alexander Van Der Bellen, awkwardly having to rule alongside a hard-right coalition in parliament. So I would hesitate to call this a “defeat for populism,” if only because the term is such a floating signifier. It’s certainly still an anti-establishment result, and people seem really desperate for change.

Battleground: You’ve spent a lot of time reporting from South-Eastern Europe, in Sarajevo, and also, in Albania. To what degree does Turkey’s growing involvement in this part of Europe complicate prejudicial perceptions of European Muslims? Erdoğan is increasingly viewed as an Islamist autocrat, and his brand is deemed toxic to identify with, not just on the European right.

ME: The real height of what some call Turkey’s “neo-Ottomanism” has come and gone. I sense that the soft power effort has pivoted south, particularly to Africa, these days.

What surprised me most when reporting on the topic was that levels of Turkish investment in the Balkans are routinely overestimated, even by Balkan Muslims themselves. Turkey certainly is present and many Bosnians are grateful for its support during the war in the early 1990s, but there’s even a saying in Bosnia that “the Turks give us love and the Serbs money”.

This image of Turkey as a revanchist “big brother” might give some succour to local Muslim communities who feel marginalised, but it cuts both ways. In Albania and Bosnia, there’s also a quasi-Orientalist tendency to juxtapose their “European” forms of Islam with “backwards” co-religionists in the Middle East. Solidarity is rarely a simple thing.

I’ve also met Bosnian, Kosovar, and Albanian Muslims who resented the implications of inferiority in the “big brother” relationship with Ankara, as well as the idea that the Balkans’ Ottoman heritage can be “owned” by Turks alone.

To the outsider, that’s one of the most visible elements of Turkey’s presence in the region: efforts by TIKA, the Turkish state development fund, to renovate and rebuild historic Ottoman-era monuments. But Turkish firms and the Turkish state are also very active in education and construction. It’s multifaceted.

Of course, I can’t forget reporting on Recep Tayyip Erdoğan’s rally in Sarajevo last year, which was essentially a re-election pitch to the Turkish diaspora living in Europe (several EU member states had apparently refused permission for the event to be held on their home turf.)

I came away with the impression that a lot of this “neo-Ottoman” posturing is actually for more domestic consumption back in Turkey rather than to win over friends in the Balkans. There are several million Turkish citizens with Balkan ancestry, and the imagery of defending the region’s remaining Muslim communities must resonate strongly with many of them.

Turkey was once seen, and still is by some, as an important guarantor of Balkan states’ accession to NATO and the EU. But today that prospect might seem more distant if not unattainable, and that’s where the “big brother” dynamic comes in. Whether the “big brother” is Turkey or Russia (as it is in Serbia), its role is to signify alternatives in societies where there seem to be very few of them.

And let’s not forget that successive self-declared “pro-European” governments across Eastern Europe are not spotless here; you could even say they’ve done at least as much to harm the EU’s reputation as any Russian disinformation could. Those who were never enthusiastic about EU membership probably genuinely see closer ties to Russia or Turkey as an alternative.

For those whose enthusiasm is waning, Ankara or Moscow probably play a more rhetorical function; the illusion of an exit from this endless, humiliating holding pattern to enter (or as they see it re-enter) Europe.

Battleground: You’ve also had the opportunity to report from Armenia. Is there anything to learn from its conflict with Azerbaijan, in understanding Islamophobia, and more distantly, anti-Semitism, in continental Europe? I’m particularly interested as it’s not something spoken of, and also because of the increasingly religious character of nationalism in the EU.

ME: The Nagorno-Karabakh conflict really isn’t about religion. It coincided with the collapse of a secularised state: the Soviet Union (or you might say it was one of the first catalysts for that collapse). Both sides sometimes deployed religious symbolism as additional markers of ethnic identity, though mostly as an appeal for support in the international arena. It’s primarily an ethnic conflict, though that’s a term I try to avoid for reasons I’ll get into.

However, the conflict and inter-communal violence did result in the “unmixing” of both Armenia and Azerbaijan among what you could call religious lines. Christian Armenians fled Azerbaijan; Muslim Azerbaijanis and Kurds fled Armenia. But in Armenia, these lines also intersect with the collective memory of the Armenian Genocide.

The Caucasus is a place where historical parallels are routinely exploited for political gain, and declarations that the Karabakh war was about saving fellow Armenians from another genocide were not uncommon in the 1990s.

In general, the Armenian historical narrative is against Turks, even if some people want to extrapolate it to be anti-Muslim in general. But that doesn’t make sense in either direction, because Armenia has very good relations with Muslim Iran to the south, while Azerbaijan has good ties to Christian Georgia.

A corollary of this has been to reinforce the European fascination with the Caucasus, particularly Armenia and Georgia, as “Christian outposts” in the Islamic world. Popular historiographies across much of the former Ottoman Empire — particularly the Balkans — reinforce this, as independence struggles seen as a Manichean battle against an eternal Turkish, Muslim enemy.

It’s not for nothing that the Christchurch shooter wrote the names of Bulgarian, Serbian, Armenian, and Georgian victories over the Ottomans and Arabs on the magazine of his machine gun.

The symbolism here is very fertile for European nativists, which is deeply saddening if you take even a cursory look into the history of the Caucasus, which has a very rich tradition of co-existence and tolerance.

Today’s conflicts in the region are not “ancient hatreds”. That recognition could be key to piecing together a common future.

Adrestia are one of the most important hardcore bands in Sweden today. END_OF_DOCUMENT_TOKEN_TO_BE_REPLACED

The Forde Report represents a new stage of the malaise afflicting the Labour Party. END_OF_DOCUMENT_TOKEN_TO_BE_REPLACED

Everyone’s going to Poland. Not just from Ukraine, but Western Europe. END_OF_DOCUMENT_TOKEN_TO_BE_REPLACED