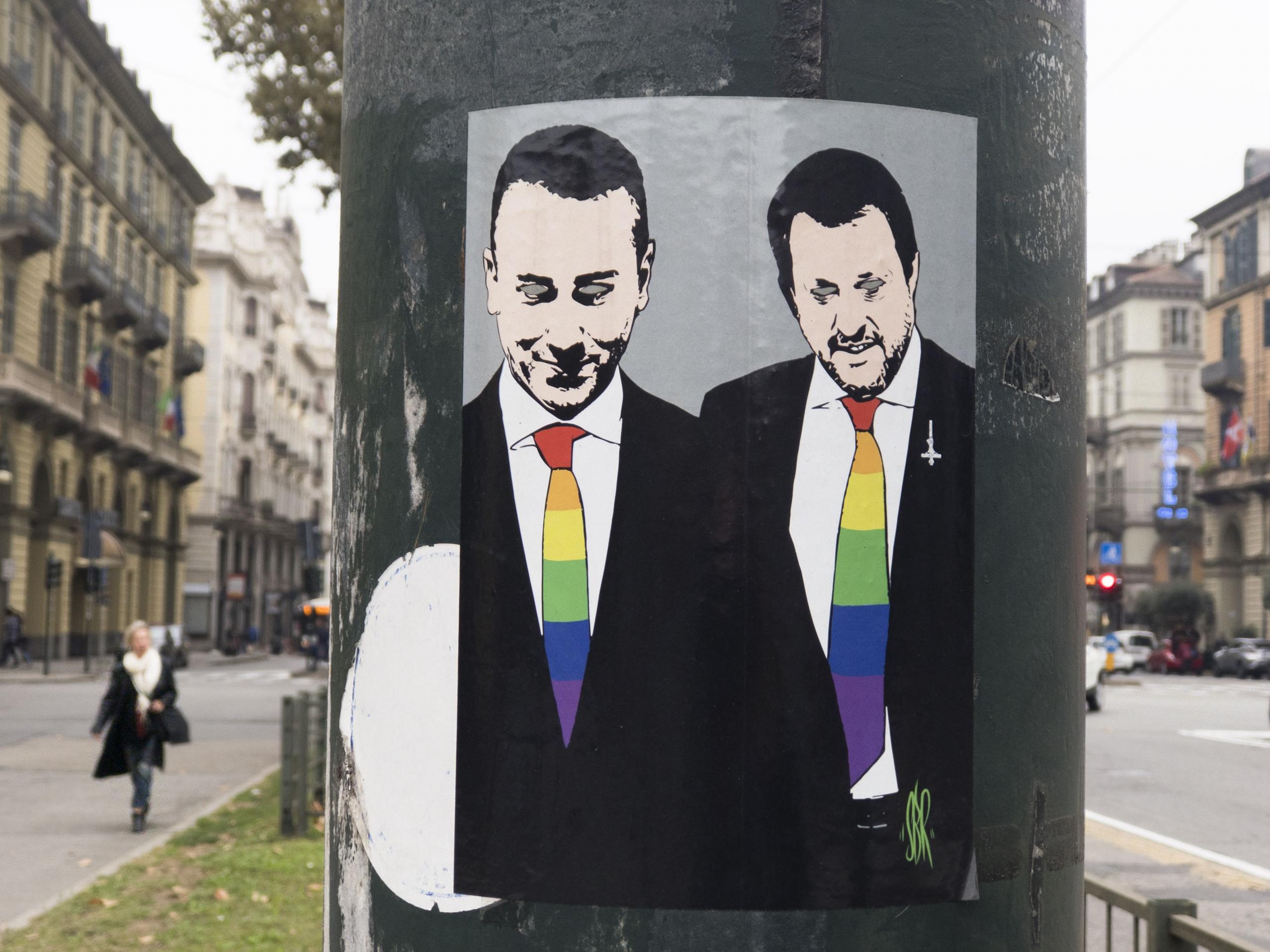 What gives? One of the European Union’s founding member states, and a member of the G7 of industrialised nations, few Western countries can claim to be as influential, or historically significant as Italy.

Enter the work of Anna Momigliano. A staff writer at Milan’s must-read Rivista Studio, Momigliano provides the sharpest commentaries you can find on Italian politics in English, appearing in the likes of the Washington Post, Foreign Policy and Haaretz.

With an eye to next week’s European elections, The Battleground spoke to the journalist about the state of Italian democracy, and what a Matteo Salvini victory would mean for her country.

Battleground: The title of your recent article, Sono loro che sono fascisti o noi che siamo paranoici? (Are they the ones who are fascists or we who are paranoid?) could not have been more timely.

Anna Momigliano (AM): Yes, the whole Torino book fair row was ridiculous. One of the people who protested the presence of the fascist publishing house [Altaforte, the publisher of a new collection of interviews with Matteo Salvini] is one of the organisers. It was totally unprofessional.

Battleground: If the book fair had never allowed Altaforte to participate, there would have been no issue.

AM: Yes, and now the book, put out by an obscure publisher, is at the top of Amazon’s best seller list in Italy. But the good thing now is that Salvini is saying that the EU elections are a referendum about himself.

The last time that someone said a referendum was about someone lost. You know who I am referring to.

I am putting my money on the Renzi effect. [Former PM Matteo Renzi pledged to resign in 2016 if a constitutional referendum he submitted failed.]

Battleground: That’s a good comparison. It’s too much about Salvini. Everyone feels smothered by him.

AM: Yes. The last time a Matteo said, “The referendum is about me” he lost. I really hope Salvini follows the Renzi path.

Battleground: There was a really interesting article this morning in Fanpage about how Italians are growing disenchanted with Salvini.

AM: There is a small but significant pushback from the left. And it’s growing. The Partito Democratico got 17 per cent at the last election, which is an all-time low, but now they are polling slightly above 20 per cent.

That explains two things. First of all, the left is getting united again. The PD has all these tiny offshoots, people fighting with Renzi. But there is no Renzi now, there is Zingaretti. He’s quite a unifying figure. Everybody likes him. He comes from the left side of the party. And people in the party realise that infighting makes them irrelevant.

The Five Stars are losing support from the right, as their right-wing voters are moving to Salvini. Why? Because the right is moving over to Salvini anyway.

One of the things that people from the outside don’t realise is that in the past election, the League grew a lot, but didn’t get a crazy amount of votes. According to the last election’s results, it was the third largest party in Italy, not the first.

The League also got 17 per cent of the vote. It’s a lot for them, but it’s not like they got 25%. And polls have them at 30% now, which is really scary. This could be an overrepresentation. And it could be that there is a bubble.

It’s possible that there is a scenario in which we will again witness a Renzi path. Renzi became Italy’s leader very quickly. He overwhelmingly won the European elections, winning 40 per cent of the vote.

Keep in mind that Salvini is nowhere close to getting 40 per cent. If the polls are indeed correct right now, Salvini will get 32 per cent of the vote.

Again, compare that to Renzi. He got, as I said, 40 per cent of the vote. Two years later, he was politically dead.

I’m not that sure that Salvini will overwhelmingly win this election. Even if he does, politics move very quickly in a country like Italy. Especially if the economy continues to stagger, I think Salvini will eventually lose support, too.

In the end, short-term support may rely on issues like immigration and security. But long-term support is about the economy.

Italy’s economy has been stagnating since I was in high school, in the 1990s. No one can be happy with the long-term prognosis, because the situation isn’t improving for anyone. So it’s very hard to make predictions.

That’s why I would be extremely cautious in interpreting Salvini’s success as being something that will be long-term.

Battleground: Sure. You could look at it as a protest vote-equivalent. His support is just a reflection of the frustration voters feels about the economy, for example, but it doesn’t represent the existential change in Italian politics that Salvini is constantly claiming it is.

AM: Yes, his support is partially driven by protest. But in the north, he still has his core of supporters. The League’s longtime supporters aren’t just people who dress up in Celtic costumes like characters in Asterix, though there are extremists in the party.

Most of the people who vote for the League are small businessmen who don’t want to pay high taxes. That’s who the base of the League is. They’re entrepreneurs who may have a small factory, with maybe twenty or thirty employees.

The League have been historically liberal on personal issues, especially the role of women in society, reflecting the huge cultural gap between northern and southern Italy.

Battleground: It would stand to reason that this is more a part of the current political logic than not. Particularly when looking at voting trends in Italy over the last ten years.

But what’s so curious, and has the rest of Europe in absolute fits, is the spectre of fascism that Salvini is ushering in for the entire EU.

AM: That’s really new to Italy. Until recently, issues like abortion and gay rights were not polarising in Italy.

Conservative Catholics were against them, but it seemed like there was nothing they could do. Progressive politicians didn’t have to say they were pro-choice, and that abortion had to be accessible due to issues such as poverty and rape.

But now we have this polarisation, and there is something not genuine about it. I think that some parties have realised that taking a strong stance on certain issues is a quick way to get a lot of buzz on TV and social media.

I know Salvini is all about family values and stopping gay rights. But I don’t think it will influence the way people vote. They’ll vote on issues like immigration. Being against immigration is one of the core issues of the League.

Battleground: The drug issue, which Salvini raised recently, was also very American. Particularly criminalising marijuana use. So is Salvini’s new emphasis on severe punishment for sex offenders, by proposing the use of chemical castration.

AM: The sex offender issue is different. That will get you votes because people tend to freak out about perceived paedophiles. I’m not so sure we can talk about a fascist wave in this instance. But I think it’s interesting to notice how the League and the Five Stars are trying to move Italy towards the Visegrad Group and the Eastern European far-right.

Battleground: Italy was a part of the Austro-Hungarian empire, particularly in the north. There are cultural influences that tie Italy to Eastern Europe.

Eastern Europe is relatively new to liberal democracy. In a certain way, so is Italy. Until the fall of the Berlin Wall, It was a blocked democracy. There were two big parties and a lot of smaller parties.

The Communists wanted to win local elections. They wanted to do a lot of things, like having a semi-monopoly on culture, for example. But geopolitical conditions required that a single party would win. Otherwise, there would be civil war and neither the Americans nor the Soviets wanted the Communists to win. That would have meant an extension of the Cold War.

From 1946 to 1989, it was inconceivable to change things and the electorate felt very powerless. One politician said, “Public opinion doesn’t count the same in Italy.” And that’s how it used to be.

Italy is, of course, a democracy. But it doesn’t have the same antibodies that are strong in other Western democracies.

Battleground: That makes perfect sense. It also is parallel to what a lot of English language histories of post-war Italy stress: That the persistence of fascist politics in Italy is due to the fact that the Allies did not administer a de-Nazification program as they did in Germany.

AM: That is true. It’s not an incorrect analysis. But it’s misleading to say that’s the only factor. The fact that Italy was a blocked democracy for so long counts much more. We also had a de-demonisation of fascism much more recently, which started with Craxi.

Beginning in the early 1990s, a new narrative emerged which stated that fascism was bad but not as bad as Nazism, and we shouldn’t make a big deal out of it. Of all these issues, blocked democracy is the most important.

Battleground: Are there possibilities for liberal democracy in Italy?

AM: It depends on a lot of small things. It’s really hard to say. It’s not unthinkable that in the next national elections, we will get a progressive-led government.

But Italy’s political institutions are really weak. If a pro-authoritarian party wins, they will weaken institutions even more. We are in a very difficult situation.

The Forde Report represents a new stage of the malaise afflicting the Labour Party. END_OF_DOCUMENT_TOKEN_TO_BE_REPLACED

Everyone’s going to Poland. Not just from Ukraine, but Western Europe. END_OF_DOCUMENT_TOKEN_TO_BE_REPLACED

In 1991, Fugazi released Steady Diet of Nothing, their sophomore full-length. Coming on the heels of the brilliant Repeater LP, Steady Diet, to some, felt anticlimactic. END_OF_DOCUMENT_TOKEN_TO_BE_REPLACED