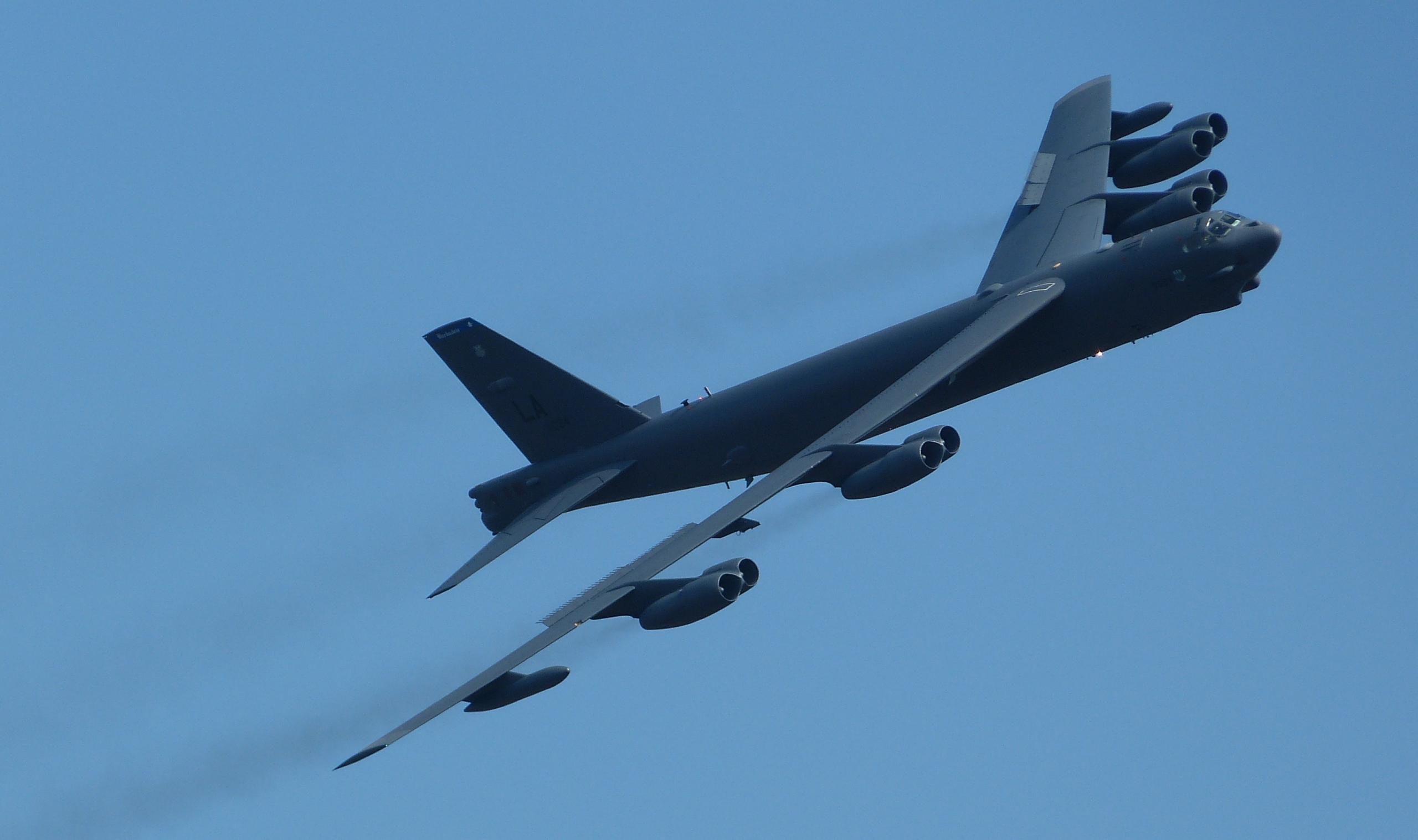 US B-52s would have a short flight to their targets from neighbouring Afghanistan.

While few want a confrontation, those that do — including elements in the administration of Donald Trump, and significant parts of the leaderships in Saudi Arabia, the United Arab Emirates, and Israel, as well as some Iranian hardliners — are well-positioned to make one happen.

After the US rushed to blame Iran for the latest attacks on tankers in the Gulf, the European Union issued a statement calling for “maximum restraint” from all parties.

The phrase was a deliberate jab at Washington and its “maximum pressure” strategy with Iran, a failing policy with potentially grave consequences.

Whether or not Iran was behind these attacks, as well as the previous acts of sabotage in May, Europe is striking the right tone in pressing for calm to avoid a third Gulf war.

The consequences of such a conflict would be dire. The devastation to a region already suffering from massive damage due to conflicts in Iraq, Syria, and Yemen is unthinkable.

Such a war would quickly involve Israel, which will be on a hair trigger, expecting Hezbollah and Hamas to attack in support of Iran.

Both Lebanon and Gaza would be at extreme risk, especially if Israel suffers significant attacks to any of its population centres.

Al-Qaeda, ISIS, and other Sunni extremist groups would be stoking the fighting on all fronts, out of their enmity with both Shi’ite Iran and the Gulf states, as well.

The risks for Europe go well beyond the critical concern the continent has about alternatives to Russian energy exports.

The war that would be unleashed would surely hit European targets in the Mediterranean region, and the refugee crisis that would follow has the potential to make the 2015 migrant crisis insignificant by comparison.

Right now, the Trump Administration is trying to “build consensus” around its Iran strategy.

What that means is that the US is coordinating with the Saudis, Emiratis, and Israelis as to how to proceed, and, in the event of conflict, who would carry the water.

President Trump is highly reluctant to commit American troops to a war with Iran and would prefer to subcontract it to regional client states, with US involvement limited to air cover and the restocking of weapons and ammunition.

Trump’s National Security Advisor, John Bolton, is more trigger happy. Bolton has advocated going to war with Iran since the 1980s, and unlike his boss, has no compunction about using US troops to do it.

Best known for his role as George W. Bush’s ambassador to the UN, tellingly, Bolton has no concerns about fabricating evidence and manipulating intelligence to get the war he desires.

Mike Pompeo, the US Secretary of State, is of a similarly hawkish bent but is a much less accomplished bureaucrat than Bolton. He is more of a Trump man.

Yet, though it went largely unnoticed as most reporters were obsessed with the “whodunnit” aspect of Pompeo’s press conference last Thursday, briefing the media on the tanker attacks, the Trump Administration official cleverly planted seeds for a US assault on Iran.

Listing the “grievances” Washington holds against the Islamic Republic, Pompeo included a 31 May bombing in Afghanistan that killed four Afghan civilians and wounded several US soldiers.

The Taliban claimed the attack. But by blaming Iran. Pompeo added to the case that the 2002 congressional authorisation for the use of military force (AUMF) would cover a US war with Iran.

The Secretary-General of the United Nations has called for an independent, impartial investigation, but the US, which has not responded to Guterres’ call, is unlikely to agree. The “consensus” the US is looking for is already coming together.

The White House circulated a grainy video it claimed showed Iranian Revolutionary Guard (IRGC) forces removing an unexploded mine from the hull of one of the targeted tankers.

While the vessel looked like the speedboats the IRGC uses, there were no evident markings on it, and it was unclear if they removed anything from the hull, or what it was if they did.

In fact, the owner of the Japanese ship stated that the attack came from the air and that the impact was above the water line.

So it could not have been a mine or a torpedo, which was the initial theory.

The Crown Prince of Saudi Arabia, Mohammed bin Salman, bluntly stated that Iran was behind the attacks, although he presented no more evidence to substantiate this accusation than Pompeo did.

The Secretary-General of the Arab League, Ahmed About Gheit, called for Iran to “be careful and reverse course”.

He was referring to Iran’s overall stance, which is to slowly inch toward pulling away from the nuclear deal as the US withdrawal renders moot most of the economic benefits for Iran. However, the timing implied Iran’s guilt in the Gulf attacks.

Perhaps most disconcerting was the United Kingdom’s blithe acceptance of the US stance.

The UK foreign office stated, “It is almost certain that a branch of the Iranian military — the Islamic Revolutionary Guard Corps — attacked the two tankers on 13 June. No other state or non-state actor could plausibly have been responsible. There is recent precedent for attacks by Iran against oil tankers.”

These are nearly the same words Pompeo used. Yet if the crew of the Japanese tanker is correct and the attack came from the air, perhaps from a drone, any number of regional actors could have carried it out.

Moreover, as Ali Vaez of the International Crisis Group stated, “The parties who seem to benefit the most from getting Iran and the US back on the collision course and neutralise [Japanese Prime Minister Shinzo] Abe’s efforts seem to be your regional allies and colleague John Bolton.”

Abe was meeting with Iran’s supreme leader, Ayatollah Ali Khamenei, during the attack on the Japanese tanker. Such needless provocation is extremely out of step with Iran’s usual behaviour, even when employing violent tactics.

The issue for Europe is not whether Iran is responsible. If Iran did do this, it is a response to increased US sanctions, designed to eliminate Iranian oil exports, driving an already troubled economy toward ruin. Is there a country that would not respond to such an act?

As Ellie Geranmayeh of the European Council on Foreign Relations said, “Most European governments are surprised how long Iran has played the strategic patience card, especially after the increase in American sanctions in November.”

So, whether Iran is responsible for the attacks on the tankers or not, the EU response must be the same: increase efforts to change the disastrous course the Trump Administration is on.

It won’t be easy. The United States has made it clear it is willing to sanction European businesses over this issue.

With economic concerns growing throughout Europe, and uncertainty and instability generated by Italy’s populist, debt-ridden government and the ongoing Brexit crisis, it’s easy to see why the EU would be skittish about provoking Trump.

But the consequences of inaction, of merely calling for investigations and making statements, are much worse.

The recent kerfuffle between the US and Mexico is instructive. Trump followed his usual pattern of creating a crisis and claiming to solve it, while actually restoring the status quo ante.

Iran is different, of course, as most Democrats, let alone Republicans, will not want to seem anything but hawkish on the Islamic Republic.

As America’s 2020 election approaches, with the economy already feeling significant impact from the trade war with China and tariffs on Mexico looming, Congress will be leery of the economic damage that could arise from Trump carrying out such threats against Europe.

The EU must provide Iran the “positive signals” it is looking for by creating economic incentives to stay in the deal even if Trump stays out.

The way to do that is to find a way for Trump to back off of his “maximum pressure” strategy while allowing him to claim a victory, even if he lies about it, as the president did with Mexico.

That path is risky, because it calls for a firmer, more direct stance from the European Union. We know how Trump treats allies who stand up to him.

But it is a far smaller risk than the current situation, where one mistake could lead to the widest Mideast war yet, threatening the lives of millions and crippling the global economy.

Foucault once suggested that Clausewitz’s famous observation, “war is not merely a political act but a real political instrument” carried out by other means, be reversed, with politics made an extension of war. END_OF_DOCUMENT_TOKEN_TO_BE_REPLACED

Brexit will turn three on the last day of January, over six years since the 2016 referendum kickstarted Britain’s race to the bottom. END_OF_DOCUMENT_TOKEN_TO_BE_REPLACED

Be careful what you wish for. It may be a cliché, but it’s one the Greens are learning all over again. END_OF_DOCUMENT_TOKEN_TO_BE_REPLACED