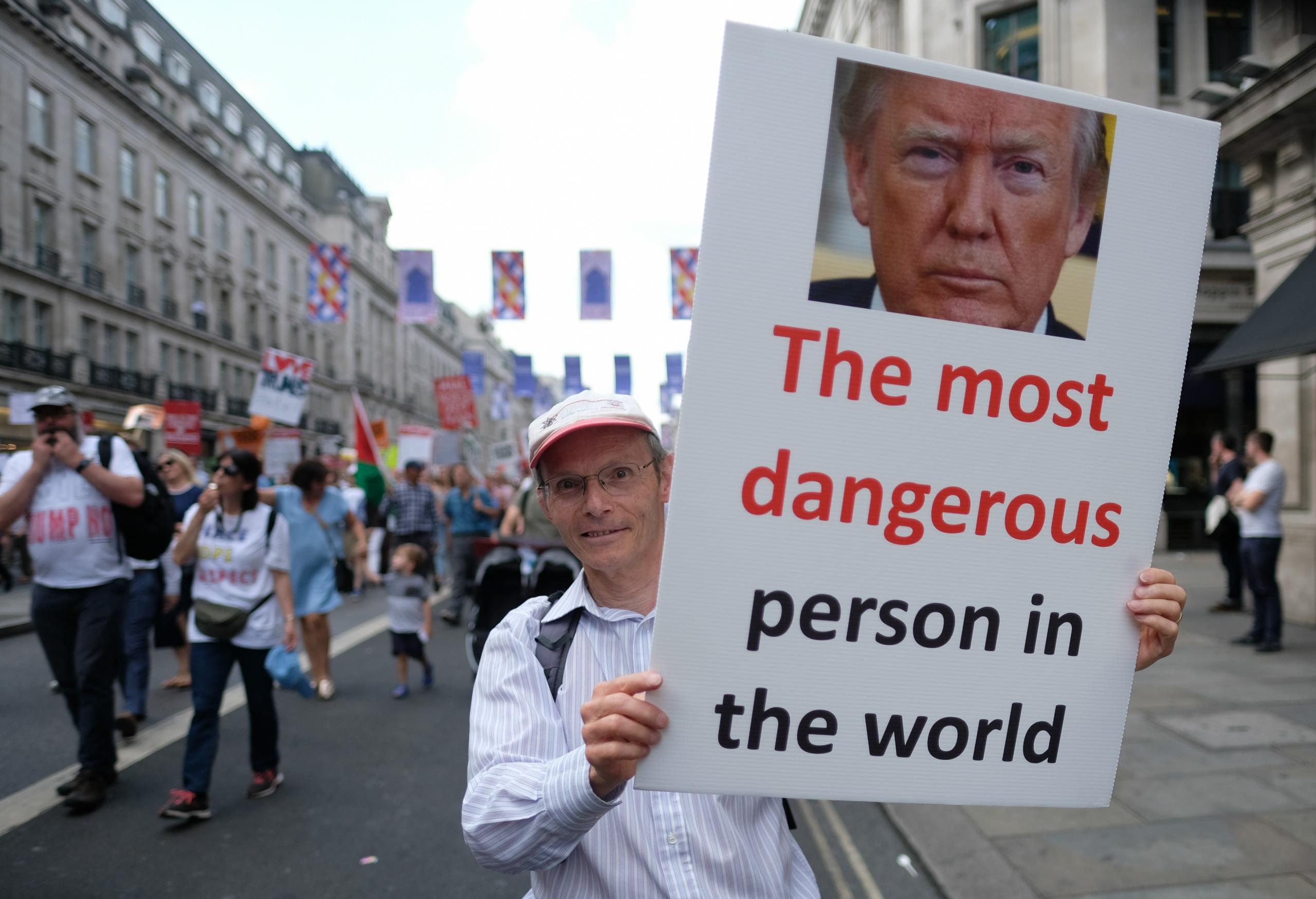 This is how the news media covers the so-called ‘Iran crisis’, which seems to come and go depending on the US government in power.

It looks scary because Americans don’t make a habit of showing off their military in public.

Yet the facts are that the Iran nuclear deal was the best opportunity the world has had to end four decades of tensions with Tehran and bring the Islamic Republic in from the cold.

If there was an Oslo or Camp David-style peace agreement for the Obama era, it was the Iran deal, warts and all.

It was a victory for Washington, too, from a military point of view.

The agreement allows the United States to watch over Iran’s nuclear energy programme and grants inspectors access to every nuclear facility in the country.

This is why retired US Army Colonel Lawrence Wilkerson described the deal as “the most intrusive inspection regime” in the history of the Non-Proliferation Treaty (NPT).

“Frankly, I am surprised that Iran is allowing so much,” Wilkerson said.

“Cheating on any deal is possible, of course; but cheating within the parameters of this deal will be very difficult — and, more importantly, I have every confidence that we would detect such cheating in time to take appropriate action.”

Wilkerson would know. He served as chief of staff to Secretary of State Colin Powell under President George W. Bush.

The American officer helped write the notorious United Nations presentation on Iraq’s weapons of mass destruction, but is now a staunch critic of American foreign policy.

When I spoke to the colonel, Wilkerson explained the strengths of the deal and why it should be preserved.

“The nuclear deal has been successful in its two most powerful aspects for us and our partners,” Wilkerson began.

“Iran is not moving to manufacture a nuclear weapon and should Iran move to do so, the warning time is now a year or more rather than the month or two it was before the accord.”

It’s surely much more likely today than it has been for many years. But it’s doubtful that the nuclear deal can be saved without US support.

As my colleague Mitchell Plitnick wrote in The Battleground last week, America’s wars in the Middle East are increasingly turning the EU into a displaced persons camp.

Donald Trump can complain all he wants about Angela Merkel’s opening up of Germany’s borders to refugees. But he’ll never let the US take responsibility for sending them there.

Chancellor Angela Merkel and President Emmanuel Macron know by now that they can’t rely on the United States to secure the Iranian nuclear agreement.

The collapse of the deal sets a terrible precedent, and, worse, it creates a new deterrent to negotiate with the US.

The German government does not want a war with Iran and would much prefer to keep the deal in place.

The same is largely true in France, Spain and Italy. Whether these countries will be bold enough to defy Washington is another matter.

Yes, Germany and France took a bold stance against the 2003 invasion of Iraq. The two countries at the heart of Europe sided with Russia and China.

However, it’s worth noting that Gerhard Schröder would have probably gone along with the war had it not been for the level of opposition in German society.

Likewise, the Chirac government was only opposed to the Iraq war because it feared the loss of its oil deal with Saddam Hussein.

Yet the French establishment would still support the US-led War on Terror and, in exchange, Total got access to oil fields in Northern Iraq.

In other words, business as usual.

Meanwhile, the British government is well aware that the end of the nuclear deal is a disaster, but is far too cowardly to oppose the whims of an American president.

The British political establishment, in its inability to deal with its loss of empire, likes to think it can relive its past glory through US foreign policy. It couldn’t be more wrong.

The so-called ‘special relationship’ is a one-way street. The UK pretends it’s an equal partner, but it’s really just another gun for hire.

By contrast, France and Germany may like to think they are more independent of Washington but they’ve yet to prove it in the age of Trump.

The American pivot away from diplomacy suits certain regional powers: Israel and Saudi Arabia being the two most important.

It would be easy to read the shift in American foreign policy as the result of pro-Israeli and pro-Saudi lobbies in Washington.

But this would misrecognise the facts on the ground. The Strait of Hormuz is one of the most important chokepoints in the world.

The US is interested in controlling the flows of oil and petrodollars around the world. The Islamist regime in Iran is outside of Washington’s sphere of influence.

“Do regional splits produce US political splits? Not as much as some pundits try to insinuate,” Wilkerson said.

“Most of the opposition to the deal — from my party, the Republicans — is simply political opportunism.”

Wilkerson was quick to point out the incentives for American defence concerns.

“That said, yes, the fact that this strange alliance between Tel Aviv and Riyadh has developed and that the Gulf Cooperation Council is buying billions of dollars of Lockheed Martin’s BMD (ballistic missile defence), and that Iran is on the ‘other side of this equation’ does cause political line-ups here in the US.”

Once upon a time, the Israeli government viewed Iran as a counterweight to Saddam Hussein’s regime and supplied it with weapons and spare parts.

Likewise, the Saudi royal family was once just one pillar of Muslim power aligned with Washington in the region, alongside Iran and Turkey.

In 1979, the Iranian Revolution changed everything.

Not only did it mean Iran became an example of a new kind of republic.The Shia-led regime would help create Hezbollah in the early 1980s in order to push Israeli forces out of Lebanon.

“You have Republicans lined up supporting dictators with oil, Israel doing the same, and arguably the most democratic country in Southwest Asia, Iran, being cast as their common enemy,” Wilkerson said. “Politics does make for strange bedfellows.”

The real danger may be that the US will stumble into a new war in the Persian Gulf.

It’s likely the Israeli government and the Saudi regime will read the dynamics of the situation and conclude it’s possible to take a shot at Iran.

Both countries were already engaged in increasingly hot wars with Iran, in Syria and in Yemen, before the present crisis emerged between Washington and Tehran.

The US could play a role in airstrikes, while Israel and Saudi Arabia would look to strategic opportunities a weakened Iran could open in their conflicts.

That’s the most discussed scenario, in regional news media, in the Middle East.

What’s most likely in the short-term is that the Islamic regime will take a harder line and shift gears away from reformism.

We may well see the mullahs replace President Rouhani with someone like Mahmoud Ahmadinejad. Both the US and Iran will pretend the deal never happened.

Of course, the Republican Party is only concerned about throwing red meat to its core base.

Trump understands this and is willing to play along, but whether he’s willing to go all the way is less clear. The president has always argued against America’s wars in the Mideast.

The good news is Mike Pompeo and John Bolton are not in the driving seat.

The bad news is no one is really in command in Washington, either.

Photograph courtesy of Alisdare Hickson. Published under a Creative Commons license. This article is a co-publication with Souciant.

Foucault once suggested that Clausewitz’s famous observation, “war is not merely a political act but a real political instrument” carried out by other means, be reversed, with politics made an extension of war. END_OF_DOCUMENT_TOKEN_TO_BE_REPLACED

Brexit will turn three on the last day of January, over six years since the 2016 referendum kickstarted Britain’s race to the bottom. END_OF_DOCUMENT_TOKEN_TO_BE_REPLACED

Be careful what you wish for. It may be a cliché, but it’s one the Greens are learning all over again. END_OF_DOCUMENT_TOKEN_TO_BE_REPLACED