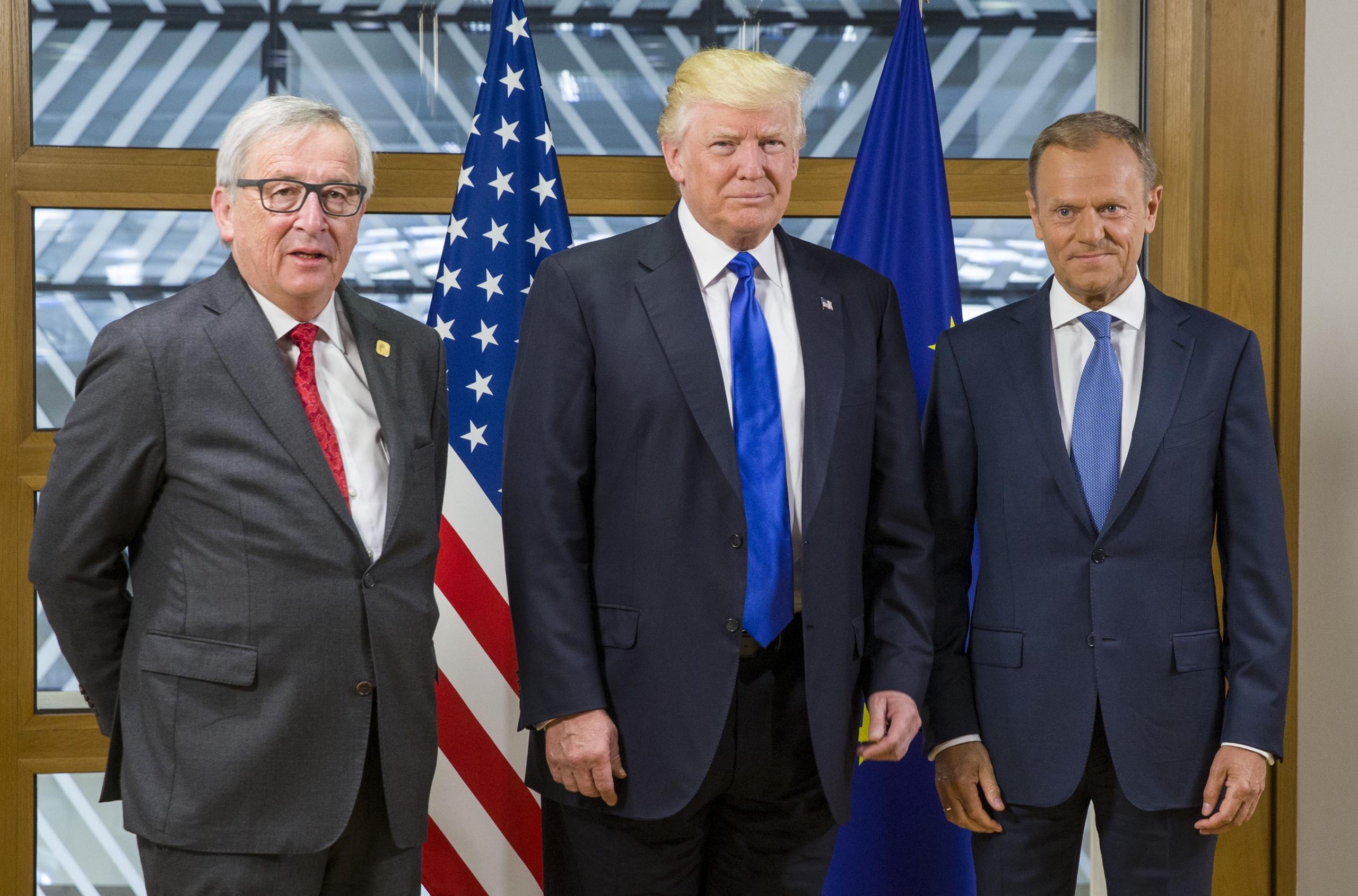 Other than a few random hellos with French President Emmanuel Macron and a brief meeting with German Chancellor Angela Merkel, Europe didn’t seem to get any of the admittedly limited space in the president’s mind, and the networks duly followed suit.

One might say that this was a positive development, given the history of Trump’s interactions with the major European powers.

Donald Trump’s repeated displays of disdain for Europe have become part of the fabric of American perception of its current head of state.

Trump mistreats and insults traditional allies while fawning over and cosying up to dictators of countries with whom the United States is at odds.

There’s little point in reinforcing that, particularly when those European allies whom Americans instinctively dislike, such as Matteo Salvini and Viktor Orbán, are the only visiting EU dignitaries to receive the president’s approval

Since the realty tycoon first assumed office in January 2017, there has been a marked difference in the US presidency’s dealings with Europe and with other close allies, such as Mexico or Canada, compared with the previous Obama Administration.

Right-wing media and think tanks have been particularly muted in responding to Trump’s high-handed treatment of America’s European allies.

This shouldn’t come as a surprise. Conservative disdain for Europe has been a growing phenomenon for some time now.

It used to be different.

Throughout the Cold War, transatlantic relations were defined by military and ideological solidarity. The division of European spheres of influence between the United States and the Soviet Union made allegiances simple.

Yet Western Europe — ironically, with a lot of post-World War II help from Washington — was developing a strong social safety net and a more controlled market economy while the United States, by the 1970s, was moving towards a sharp reduction in public spending and a much more unequal society.

This tension between what Americans understood as European “socialism” and their own laissez-faire capitalism became a significant part of post-Cold War angst.

That tension was inflamed after 11 September 2001. The activation of Article 5 of the NATO treaty after the attacks on New York, Washington, and Pennsylvania was a unique moment of solidarity, but one that did not last.

EU member states were not uniformly enthusiastic about joining the United States in what many correctly predicted would be a brutal, bloody, and costly war without end in the Middle East that would have dire repercussions, such as the refugee crisis.

The neoconservative elements on the American right, who enjoyed an outsized influence on the policies of President George W. Bush, could not forgive European reticence. This was a new World War II and Europe was not reciprocating the solidarity.

Witness President Bush’s derisive comments about French “freedom fries” and Secretary of State Donald Rumsfeld’s use of “old Europe” to divide Western Europe from newer, Central European member states eager to support an invasion of Iraq such as Poland and Hungary.

The cooperation Washington got from the United Kingdom, under Tony Blair, gave the UK a similarly positive place in the right-wing mindset, which persists to this day in US support for Brexit. The rest of Europe was increasingly seen as feckless, if not cowardly by neocons.

Meanwhile, America’s populist equivalents grew this antipathy to a whole new level. Powered by a mix of libertarian, Evangelical and Tea Party conservatism, the EU became the next front in their crusade to remake the world in the United States’ post-Cold War image.

Europe, in the form of the EU, became increasingly framed in the language of anti-communism. From Fox News to Breitbart, it was consistently represented as a decadent and crumbling old world where progressive values had been tried and failed and were in dire need of replacing.

Europe is an “entitlement society”, in the words of 2012 Republican presidential candidate and current Utah Senator Mitt Romney, an elitist urban model that stood in contrast to the wholesome goodness and wisdom of small towns and communities of the American heartland.

It is here that Donald Trump stepped onto the stage and revised the contemptuous attitude towards the EU institutionally, making it a formal starting point of his foreign policy.

In Trump’s mind, the European Union is not only failing due to its liberal agenda. It is dragging the United States down with it and needs to be put in its place by its big brother, Washington, just as its Western member states were individually kept in line during the Cold War.

In the president’s transactional worldview, NATO, in particular, is a place where the United States is being “taken advantage of”.

Building on an initiative begun during the Obama Administration, Trump demanded that NATO member states raise their contributions to the alliance to 2% of their GDP.

Barack Obama had hoped that an increase in European spending would lower NATO’s dependence on the United States, a broad goal he pursued for much of his administration.

President Trump, by contrast, merely called the current spending level “unfair” but did not elucidate either how the increase would make Europe more secure or why it might be necessary.

Trump’s critics contended that his goals were to please his base by bashing Europe and increasing the sales of US fighter planes, such as the overly expensive F-35, instead of the Eurofighter, which has repeatedly outflown its US competitor in simulated dogfights.

The president’s enthusiastic support for Brexit is another case in point. Guardian journalist Carole Cadwalladr has, for years, been documenting the common bonds between the Brexit campaign and the Trump Administration and campaign before it.

Both received enormous financial support from conservative American billionaire Robert Mercer and both employed the services of strategist Steve Bannon, who continues work to undermine member state governments in the EU by fomenting far-right political movements.

For those who remember covert US activities in Latin America during the Cold War, Bannon’s activities are unsettlingly familiar. Promoting a mix of religious and fiscal conservatism, to create more compliant client regimes is an American foreign policy hallmark.

The question is why, under Trump, Washington chose to proactively make Europe an adversary like this. Free trade agreements, like TTIP, which, critics argue, erode national sovereignty, do the same thing.

In this instance, what the American leadership seems to be concerned about with is ideology. Even though the US dominates in security and trade, the president, and the conservatives he represents, wants to see consistency in European political attitudes as well.

This is why Donald Trump has repeatedly attacked Angela Merkel for her decision to allow nearly a million Muslim refugees into Germany in 2015 and embraces far-right European leaders like Polish PiS chief Jaroslaw Kaczyński.

In Trump’s view, Germany ought to have a leader like Kaczyński, who share in his dislike of Islam and immigration. Hence, the US ambassador to Germany repeatedly pounding on Merkel for her policies and openly courting far-right opposition party Alternative für Deutschland.

Europe is also a perfect staging ground for securing assent for the president’s domestic policies. If Trump can point to Viktor Orbán’s security fence on Hungary’s border, and Matteo Salvini’s refusal of port access to refugee ships, it enhances his popularity with his racist US base.

For the president’s core supporters, Merkel is the epitome of the weak bleeding heart who opens the borders and gets her own people in trouble as a result. Europe thus stands for what not to do, in the United States, even though there’s no proof it did anything wrong.

Ironically, this issue — which represents the most basic distinction between the Trumpian American right and the neoconservative branch that despises the president — illuminates the common thread linking the two major strains of anti-Europeanism amongst US conservatives.

Outside the Beltway, hostility towards Europe is perhaps less instrumental and more a reflection of the triumph of libertarianism and Evangelical Christianity in American culture. Small government, free markets, low taxes and church instead of state are the drivers.

This mix, reconciling the two main strands of American conservatism, needs the foil of an economically underperforming, politically correct, European mega-nanny state in order to justify the belief that unregulated capitalism is the best decider between winners and losers.

But, at the end of the day, it’s important to remember that right-wing hysteria about Europe is a useful distraction from the real issues at hand. For someone like Donald Trump, it masks something far more tangible and real: A desire for greater business opportunities abroad.

Take, for example, the president’s answer to a British reporter who, during a June visit to the UK, had asked him about American intentions to buy up the NHS after Brexit.

“…everything on the table”, he replied, sounding caught off guard. “Everything will be on the table,” Trump clarified.

Brexit will turn three on the last day of January, over six years since the 2016 referendum kickstarted Britain’s race to the bottom. END_OF_DOCUMENT_TOKEN_TO_BE_REPLACED

Be careful what you wish for. It may be a cliché, but it’s one the Greens are learning all over again. END_OF_DOCUMENT_TOKEN_TO_BE_REPLACED

Before his arrest, Andrew Tate was just another influencer with bad politics. END_OF_DOCUMENT_TOKEN_TO_BE_REPLACED