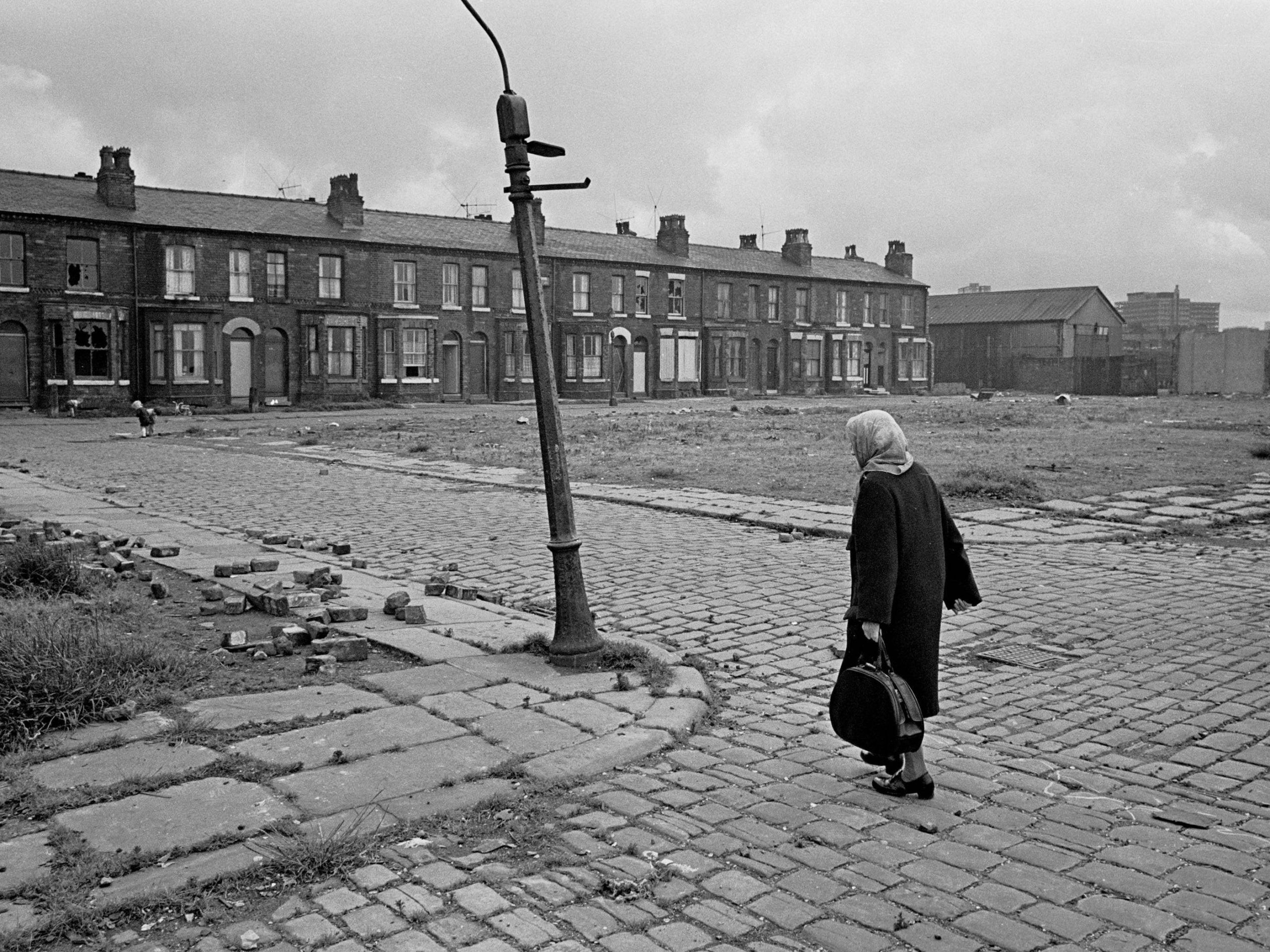 The seeds of Brexit were planted decades ago. Salford, 1971.

It may be true that it takes a couple of hours on a train to get to Bolsover from London, but the distance between the town and the capital is more than just geography. It’s a cultural and economic divide. Think class. Think regional accents.

“Bolsover was thriving years ago,” said one resident. “You had a dozen pubs to go to, whereas now you only have a few.”

“It used to be the men went down the pit and the women worked at the knicker factory,” the resident said.

Today the best pubs are closed. If you want a decent drink you have to go to the local Wetherspoon’s, which is an appropriate venue for a Leave-voting constituency. The next best option is to drive to Chesterfield and go to one of the bars there.

As the UK hurtles towards the cliff-edge, the country is sharply divided over whether the approaching exit date is the end we should embrace or the catastrophe we should fear. What side you’re on depends where you are in the country.

I have the unusual advantage of living in Haringey, London, one of the most pro-Remain areas of the UK, and being from one of the most vehement Leave constituencies in the country. Over 70% of Bolsover residents voted for Brexit in 2016, while more than 75% in Haringey voted Remain.

“When we voted for it, it should have been done then and there,” my granddad said. “They’ve dragged it out because they don’t want to do it.”

“They say it’s about the Irish backstop,” he said, adding, “but it’s not really.”

That being said, granddad doesn’t have high hopes for Boris Johnson. “He’s just another Trump,” he said with a smirk.

It’s a cliché that Labour faces a battle in its Northern heartlands. The narrative has it that the anti-immigrant right is usurping the Labour Party because it no longer represents working-class people. This is the same argument made by the Labour right, but this reduces working-class interests to one issue alone.

The truth is that the Leave vote was a cross-class coalition of the nouveau riche elites, some of the conservative sections of the middle class and the lower middle class on one side and working-class nationalists on the other.

It’s forgotten that the majority of the Brexit vote was southern and middle class. According to Ashcroft’s study, 52% of the Leave vote was middle class and based in South England. Nevertheless, it’s undeniable that there is a right-wing nationalist vote in the North and the Midlands.

Much of the right-wing vote in a lot of Northern cities and towns was not a key part of the Labour base. The composition of this vote is complicated. Studies are suggesting Labour voters go Tory long before they end up backing a conman like Nigel Farage.

Just before the 2015 general election, I was talking to my nana about who she would vote for. I had already made up my mind and had no illusions of a Labour victory. “I was thinking of voting UKIP, but then I read that they want to get rid of the NHS and even maternity leave,” nana said.

It was a morose comment on the state of affairs in the UK. She was resigned to the fact that it no longer mattered to cast a vote for the party of the working class. A few years later Brexit had added to this dynamic.

In the run-up to the European elections in 2019, many of my relatives were unsure how to vote. It was out of the question to vote Tory and Labour’s message no longer fit with their wish for Brexit to go ahead.

“We can’t vote for Labour because they’re for a second referendum,” nana said.

This is the inversion of what a lot of Remainers think about Labour. The Observer line is that the Labour leadership is pro-Brexit, so the Lib Dems are the only tactical vote to cast. The polarisation has entrenched divides which were once more fluid.

The Labour voters who supported Leave tend to be the ‘softer’ advocates of Brexit. These voters are much more open to compromise on a whole array of EU-related issues than the average UKIP or Tory voter, who has become increasingly hostile to any talk of concessions.

I recall my cousin put it just after the 2016 vote: “We have to run our own affairs like any other country.” He pointed to Switzerland, as an example, where the country is in EFTA but outside the European Union.

Indeed, the Alpine nation has access to the single market and separate agreement to guarantee freedom of movement with the EU. EFTA has a set of parallel institutions to the EU to promote free trade outside the customs union. This was the arrangement for the UK before it joined the common market.

Yet it’s increasingly hard to find a ‘soft’ option. The national debate has turned to an either/or scenario: revoke Article 50 or crash out with no deal. All talk of a fresh referendum has become synonymous with a hard Remain position.

“You can’t just keep voting until you get the result you like,” she stressed.

There’s less and less time for a solution that most people would favour. Public opinion has fragmented and regrouped into just two camps, it could do so again before the next election. The outcome may leave more people dissatisfied and disempowered than they were before June 2016.

It’s undeniable that there was a working-class swing vote in the referendum, but this was always overplayed to give the middle-class vote greater legitimacy. The left-behind towns of England were never the driving force behind Brexit.

Bolsover has been a Labour constituency for several decades. It’s hard to imagine the area ever falling to the Conservatives. Brexit has helped mobilise and unify the right-wing vote in the area, despite the fact the MP is one of the toughest Eurosceptics in Parliament.

MP Dennis Skinner has represented the area for almost half a century. He’s often described as ‘Old Labour’, but this ignores the fact that Skinner was always a part of a small left faction within the party. His record is clear: anti-EU and pro-worker.

Skinner’s life is a thread running from the days when trade unions could force governments from office to the present low-wage economy of ‘flexible’ contracts. He would trace the origins of the existing order to the Thatcher era and particularly the 1984 Miners’ Strike.

“We fought as well as we could, but we were battling against not only the police,” Skinner said. “All the higher echelons of the state were raised against us. It’s never happened before, except in the 1926 strike. That was an honourable year.”

“Men at sixty, who were prepared to salvage the roof over their own head for a sixteen-year-old lad at a coalfield that they didn’t even know existed,” he recalled. “That was honour! And I’m proud to have fought every single day, I’d love to do it again!”

Communities built around industry have suffered a harsh transition. Now, most local jobs are in the public sector and the services economy, whether it’s retail, warehouses, call centres or transport. Today the national economy is almost completely centralised around finance and the property market.

Bolsover was home to coalite mines and the last of these mines closed in 2007. Meanwhile what’s left of the textiles plant is a site for teenagers to hang out in. The last I heard about the knicker factory was it was one place the kids used to get high.

Thatcher’s chief enforcer Norman Tebbit seemed to regret the impact of the strike in a 2009 interview. “Those mining communities had good working-class values and a sense of family values,” he said. “The men did real men’s heavy work going down the pit.”

“Many of these communities were completely devastated, with people out of work turning to drugs and no real man’s work because all the jobs had gone,” Tebbit said. “There is no doubt that this led to a breakdown in these communities with families breaking up and youths going out of control.”

Of course, Lord Tebbit had to blame the strike and not government policy. “The scale of the closures went too far,” he concluded. “The damage done to those communities was enormous as a result of the strike.”

The fact that the Thatcher government prepared for the strike by stockpiling coal for more than a year gets lost. The plan was always to starve-out the miners and push ahead with the closures. It was a part of a struggle to break up the post-war settlement.

The Falklands War and the Miners’ Strike were the two great ideological moments of the 1980s. Those two events could have brought down the government if they had gone the other way. The defeat of the miners still haunts a big part of Britain.

Contrary to what Blairites claim, the left has to mobilise the people living in these pit towns if it wants to win the struggle for Britain’s future. How we can do this is less clear, but what is clear is that mass disaffection with Labour has cost the country dearly.

What allows the right to dominate working-class politics is this decline in popular participation. It’s time to make a sharp turn and head back for the left behind.

Brexit will turn three on the last day of January, over six years since the 2016 referendum kickstarted Britain’s race to the bottom. END_OF_DOCUMENT_TOKEN_TO_BE_REPLACED

Be careful what you wish for. It may be a cliché, but it’s one the Greens are learning all over again. END_OF_DOCUMENT_TOKEN_TO_BE_REPLACED

Before his arrest, Andrew Tate was just another influencer with bad politics. END_OF_DOCUMENT_TOKEN_TO_BE_REPLACED