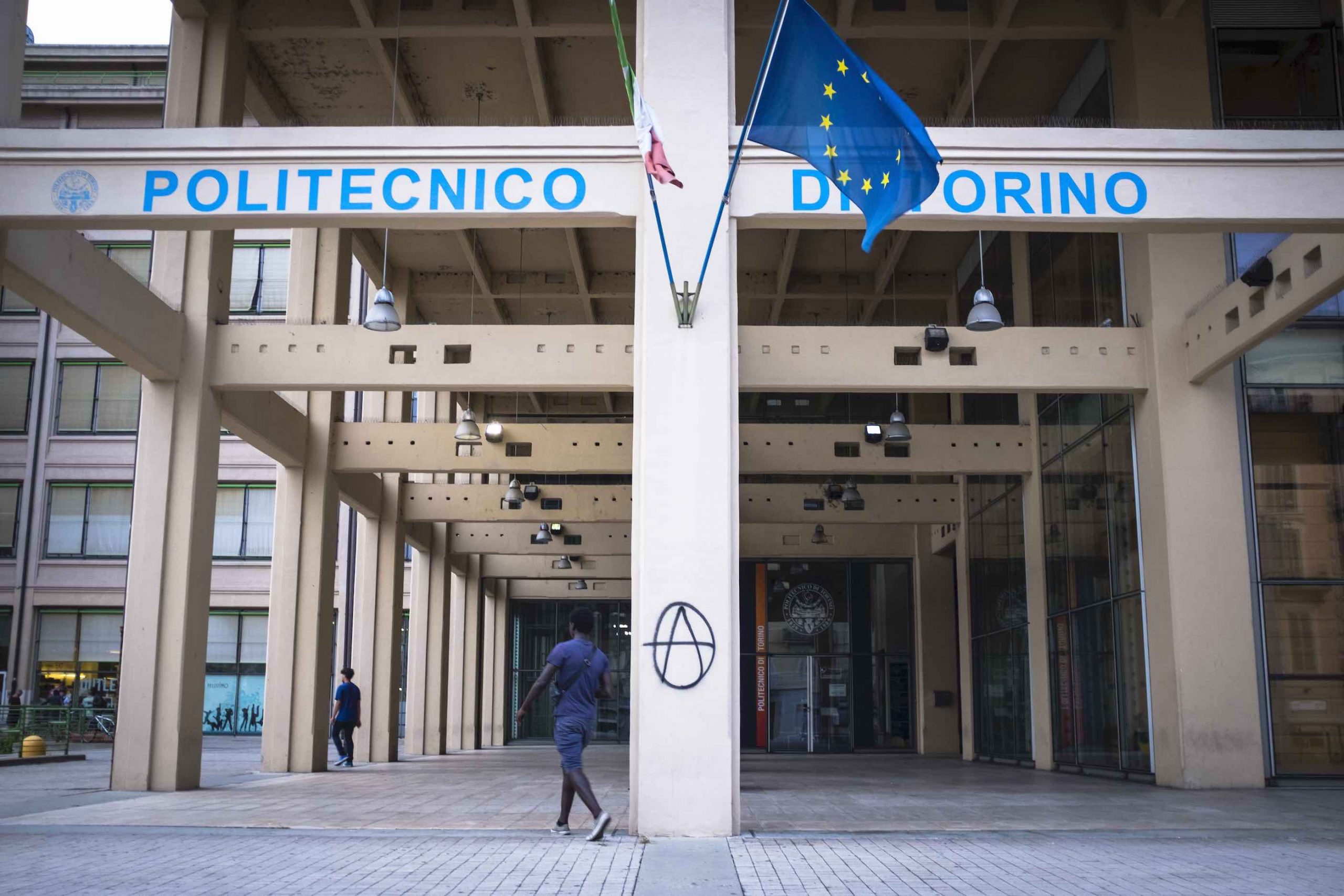 “What section of the supermarket do you call that in Italian?” he asked, as he passed me by, in the coffee section.

He found himself blocked by a middle-aged security guard at the end of the aisle.

“Come with me,” he said in Italian, gesturing towards the supermarket entrance.

The kid, likely an exchange student at the Politecnico di Torino, didn’t understand.

“What did you just say?” he asked in English, clearly surprised by the approach. The guard could not answer him.

“He’s asked you to leave the market,” I told him.

A look of shock came over his face. An American, of Filippino descent, I surmised, had been singled out as a possible shoplifter.

Soon enough, the security guard was emptying his backpack on a disused checkout counter. Predictably, nothing was there.

A market employee stood there in silence, watching the proceedings. When the kid left, he looked at me and threw up his arms, astonished at what just happened.

“That is one of the most racist things I’ve ever seen,” I told him, as I paid for groceries. “You just kicked him out of here because he’s Asian.”

That the guy was also American didn’t seem to matter. It didn’t seem like the security guard even picked that up.

It was especially surprising because my neighbourhood is extremely diverse. Home to the Fiat HQ and a Politecnico campus, every time I leave my flat, I hear several different languages.

Arabic, English, French, and Romanian, the mix of exchange students and migrants make an otherwise uneventful residential neighbourhood into a case study of Italy’s globalization.

“I’m so sorry you had to witness that,” the same clerk told me when I returned to the supermarket later. “That was very Lega.”

Historically known as the Lega Nord, now also the Lega per Salvini Premier, after its current leader, it was just before the 2018 Italian elections, and tempers were running high.

Running on an explicitly racist ticket, targeting every manner of minority and foreigner, even Americans were up for grabs.

That this student in question was an ethnic Asian, one of the least stigmatised minorities in Salvini’s lexicon, didn’t matter. He wasn’t white. Therefore he was a thief.

Even more interesting was the lack of appreciation for the kind of Asian he might have been. Few migrant communities in Italy are exempted from the hate directed at Arabs and Africans more than Filipinos.

With an estimated 200,000 living an Italy, these hardworking Catholics occupy their own caste space in the country, serving as domestic labourers, in construction and service jobs. Not equal to Europeans, but light years ahead of blacks and Muslims.

That’s why I had a hard time making sense of why this kid got singled out.

He was darker-skinned and wore hip-hop looking attire. Perhaps he’d been mistaken for an African?

Ethnic Italians can be as dark, particularly if they have roots in the south, descendants of Sicilians, for example, who came to work in Turin’s automobile factories during the Cold War.

I couldn’t figure it out. There was no point in questioning the security guard or the supermarket management. I doubt they would have engaged with me anyway. This was too touchy – and potentially embarrassing.

I couldn’t help but resign myself to thinking through the incident on my own and wondering why, in a neighbourhood like mine, something so provincial and reactionary could take place.

This was a part of the city once dominated by labour unions and communists, that had since come to be defined by a large shopping mall, and the world’s first Eataly, the artisanal slow food chain.

Throw in a good university with a large foreign student body, and a couple of kebab and sushi places, and it feels more like US college town than Turin. Perhaps even the place the American student came from.

That’s the contradiction. Incidents like this shouldn’t happen here. There’s too much of the outside world to warrant anxieties about mixing with minorities at local stores. After all, we’re all equals at the cash register.

Clearly, the cultural menu of diversity – international foods, access to global brands – is not enough to keep the peace. People still fear each other, even though they have more in common than ever.

The abundance of choices we have about what we eat, how we communicate, and what we wear is not enough to overcome our differences. Particularly when politicians like Salvini always insist that there’s something bad about it.

The problem is that multiculturalism is not the same thing as equality. People of different backgrounds can coexist, to a certain extent, in the same communities, but that doesn’t mean they have the exact same privileges.

Ironically, it’s their least affluent members, such as migrants, and ethnic and religious minorities, who get treated as though they’re exploiters, or somehow untrustworthy, not the so-called locals, who have difficulty adjusting to newcomers, or people of different ethnic backgrounds.

All of those kinds of factors inform racist events, like what took place in this supermarket, in Turin. While they’re not violent or overly dramatic, they constitute attempts to exclude people who are not exactly like ourselves. That’s often the single most common experience of discrimination people suffer from.

That’s why, for the last couple of weeks, I’ve found myself engrossed by the story of repeated attempts to grant Italian Senator for Life Liliana Segre with honorary citizenship of three separate Italian municipalities

First rejected in the Milanese suburb of Sesto San Giovanni, then from the Piemontese town of Biella, 80 kilometres from Turin, in both cases, by rightwing political parties – starting with Silvio Berlusconi’s Forza Italia, then, Salvini’s Lega – the rejections were entirely predictable.

Since the early 1990s, both parties have been the standard-bearers of racism in Italy, primarily targeting migrants. Though both also boast Jewish members, there has always been an Antisemitic element to their politics, which, though initially associated with Berlusconi, has, in recent months, become more open amongst Lega members.

Liliana Segre is a case in point. The 90-year-old-lawmaker is Jewish, and an Auschwitz survivor. Earlier this month, largely in response to the racist policies of Matteo Salvini, during his brief stint as interior minister, Segre succeeded in creating a parliamentary commission to regulate hate crimes, the first of its kind in Italy.

The formation of the commission was passed by 249 votes in Italy’s Upper House, while 98 lawmakers abstained – most notably, from Salvini and Berlusconi’s parties.

Their reasoning: They were concerned with ‘freedom of speech’ issues, as both the Lega and Forza Italia have been instrumental in normalising incitement to ethnic and racial hatred in Italian politics.

Segre’s rejection was, of course, punishment for having created the hate crimes committee. (After much criticism, Biella reversed its decision to reject the senator and granted her honorary citizenship during this article’s writing.)

The link between Segre and the unnamed American student is an obvious one. The desire to exclude is a highly politicised one, that harkens back to the darkest moments in Italian history.

The distance between denying a Holocaust survivor residency in an Italian city, and prohibiting an ethnic Asian from shopping in an Italian supermarket, is obviously a short one.

That’s why I always find it important to take note events like what I witnessed in Turin when I see them. Such everyday expressions of racism never occur in a vacuum.

Brexit will turn three on the last day of January, over six years since the 2016 referendum kickstarted Britain’s race to the bottom. END_OF_DOCUMENT_TOKEN_TO_BE_REPLACED

Be careful what you wish for. It may be a cliché, but it’s one the Greens are learning all over again. END_OF_DOCUMENT_TOKEN_TO_BE_REPLACED

Before his arrest, Andrew Tate was just another influencer with bad politics. END_OF_DOCUMENT_TOKEN_TO_BE_REPLACED