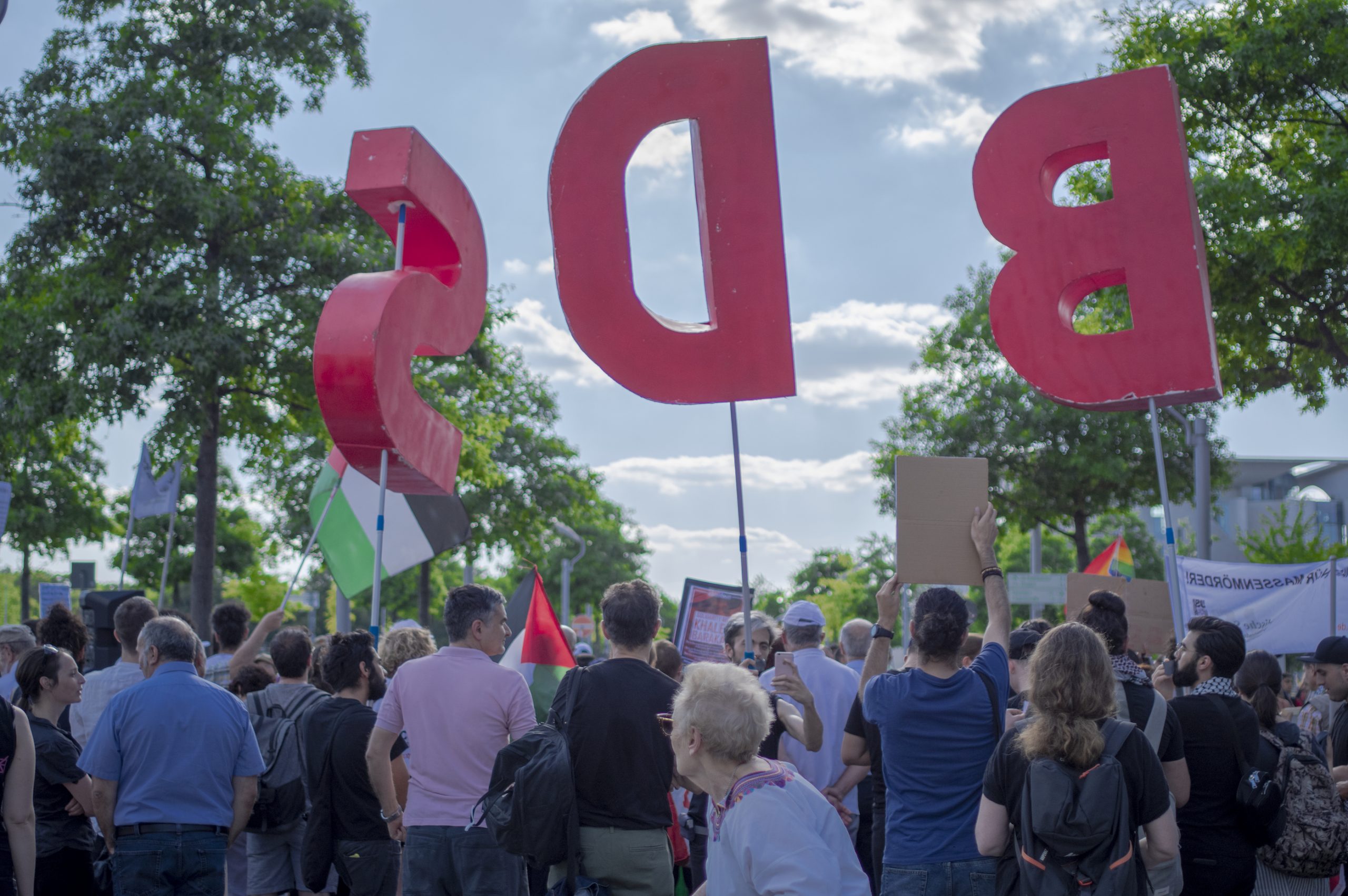 A non-violent strategy of fighting back against the occupation of Palestinian territories, BDS made its debut in July 2005, following the Second Intifada, which had come to an end earlier that year.

Modelled after the divestment strategy of the anti-Apartheid movement of the 1980s, BDS has become one of the most vilified of Palestinian resistance tactics.

For Israelis who remember fighting in Lebanon and the Occupied Territories, its impact is insignificant. The firefights, artillery exchanges, and suicide bombings were a lot more impactful.

But the fear inspired by anti-BDS rhetoric and policies is another story. It often takes Jews and Israelis back in time and trauma, often more profoundly than BDS can itself.

Framed in terms of Antisemitism and boycotts of Jewish businesses in medieval Europe, such campaigning revisits religious discrimination, not anti-racism and anti-colonialism.

In the third and final part of his interview with Ramsis Kilani, Wieland Hoban and the Palestinian German activist discuss the BDS issue and why it needs better translation abroad.

The strategy may have become hard to detoxify. But not the issues on the ground that inspired it.

Wieland Hoban: Not Just Your Picture came out in 2019 and deals with part of your family’s story, when your father and his second family were killed in an Israeli airstrike on Gaza, in 2014. Was it hard for you to talk about something so personal in a film?

Ramsis Kilani: It was very hard. It’s always easier to talk about the conditions on the ground rather than about ourselves and our misfortunes and traumas. That puts it on a different level. It’s really important to see the personal.

What I find a bit hard is firstly, the emotional strain, because it’s so difficult to be confronted with this topic. But you can’t get around that anyway. If I wanted to avoid that, I’d have hidden away and not got involved in political activism.

Secondly, showing oneself on that personal level is always a bit difficult because we risk opening ourselves up to personal attacks. But I think that despite those risks, the message is just too important for that to stop me getting it across.

Wieland Hoban: In the film, your sister Layla describes how after the tragedy, she became more determined not to hide her background. Was it the same for you?

Ramsis Kilani: Yes, though in my case the process started a bit earlier. But really getting involved, no matter how much resistance I encountered in society towards a Palestinian perspective, was the result of the tragedy.

How one relates to one’s Palestinian identity is a slightly different question. One can’t really compare it to other things, especially in Germany.

What I said about Palestine Speaks is something this documentary can also offer – telling Palestinians in Germany that they’re not alone with this experience, and that we don’t always have to put up with it.

Wieland Hoban: And as soon as BDS comes into it, it’s a way for the other side to avoid the real issues.

Ramsis Kilani: Exactly. I think the BDS issue is one of the main targets, and we see this misguided tactical approach where many people on the left say, “Sure, we don’t support BDS, or we’re critical of BDS, but…” And that’s completely wrong. BDS is the minimum of solidarity, and its three demands are absolutely worthy of support.

Wieland Hoban: But I think one still has to include the people who maybe haven’t reached that point yet, who are on our side as far as solidarity and commitment go, but can’t yet identify with BDS. And not all Palestinians support BDS either.

Wieland Hoban: One shouldn’t let that become a divisive issue within the Palestine solidarity movement.

Ramsis Kilani: No, absolutely not, I’d never go that far. I’m really just talking about this tactical approach of retreating and wanting to make concessions.

I think many people haven’t looked closely at BDS but make those concessions to avoid being labelled Antisemitic. But attacks on BDS are always attacks on Palestine solidarity as a whole.

Wieland Hoban: I think it’s often just a lack of knowledge, where people support justice in Palestine but haven’t engaged with the content of BDS.

Ramsis Kilani: Yes, mostly because of intimidation. But we also see the links that are made to criminalise BDS, like when the Jewish-Palestinian Dialogue Group in Munich wanted to show a film about the segregation wall.

Because removing the wall is one of BDS’ demands, there was an attempt to prevent the showing of the film and the use of that space. Luckily it didn’t succeed.

Wieland Hoban: Isn’t it also possible, without distancing oneself from BDS, to avoid the discussion always being reduced to that? By talking about the larger ideas and goals of Palestine solidarity.

Ramsis Kilani: I think one can do that very well by talking about the demands of BDS, which are based on international law and allow us to point out the facts on the ground.

In Germany, BDS has the advantage of shifting the discourse away from abstract issues to actual human rights violations.

Wieland Hoban: But in the German context, it also points towards German history: “Don’t buy from Jews” and so forth.

Ramsis Kilani: It can, if we don’t stay in control of the issues. I think here too, it’s better to be tactically confrontational.

What are the demands? For example, equal rights for Palestinian citizens of Israel. There are two different legal systems for two ethnicities.

Where are the inequalities? What’s the situation with building permits? What about the military occupation in the West Bank? Or the right of return.

I think one has to keep focusing on the actual conditions on the ground and the struggle for equal rights.

Wieland Hoban: Sometimes there are glimmers of hope, like when people who don’t personally support BDS say, this is about something fundamental: the right to non-violent activism.

Ramsis Kilani: Yes, defending the right to BDS as a right to free speech. One should definitely pursue that politically.

Depending on the situation, I think one can often go further and discuss the concrete demands. The right of return is no different to what one would demand for Syrian refugees.

Wieland Hoban: Such analogies are often a good way to show people where the real double standards are.

Ramsis Kilani: In discussions with people who see themselves on the side of human rights and the left, when one wants to convince them of the contradictions in their own view, these arguments can achieve something.

With the other political actors, it’s too much about power structures for us to fool ourselves that we can convince them that we’re right. But we still have to keep making those arguments.

Adrestia are one of the most important hardcore bands in Sweden today. END_OF_DOCUMENT_TOKEN_TO_BE_REPLACED

The Forde Report represents a new stage of the malaise afflicting the Labour Party. END_OF_DOCUMENT_TOKEN_TO_BE_REPLACED

Everyone’s going to Poland. Not just from Ukraine, but Western Europe. END_OF_DOCUMENT_TOKEN_TO_BE_REPLACED