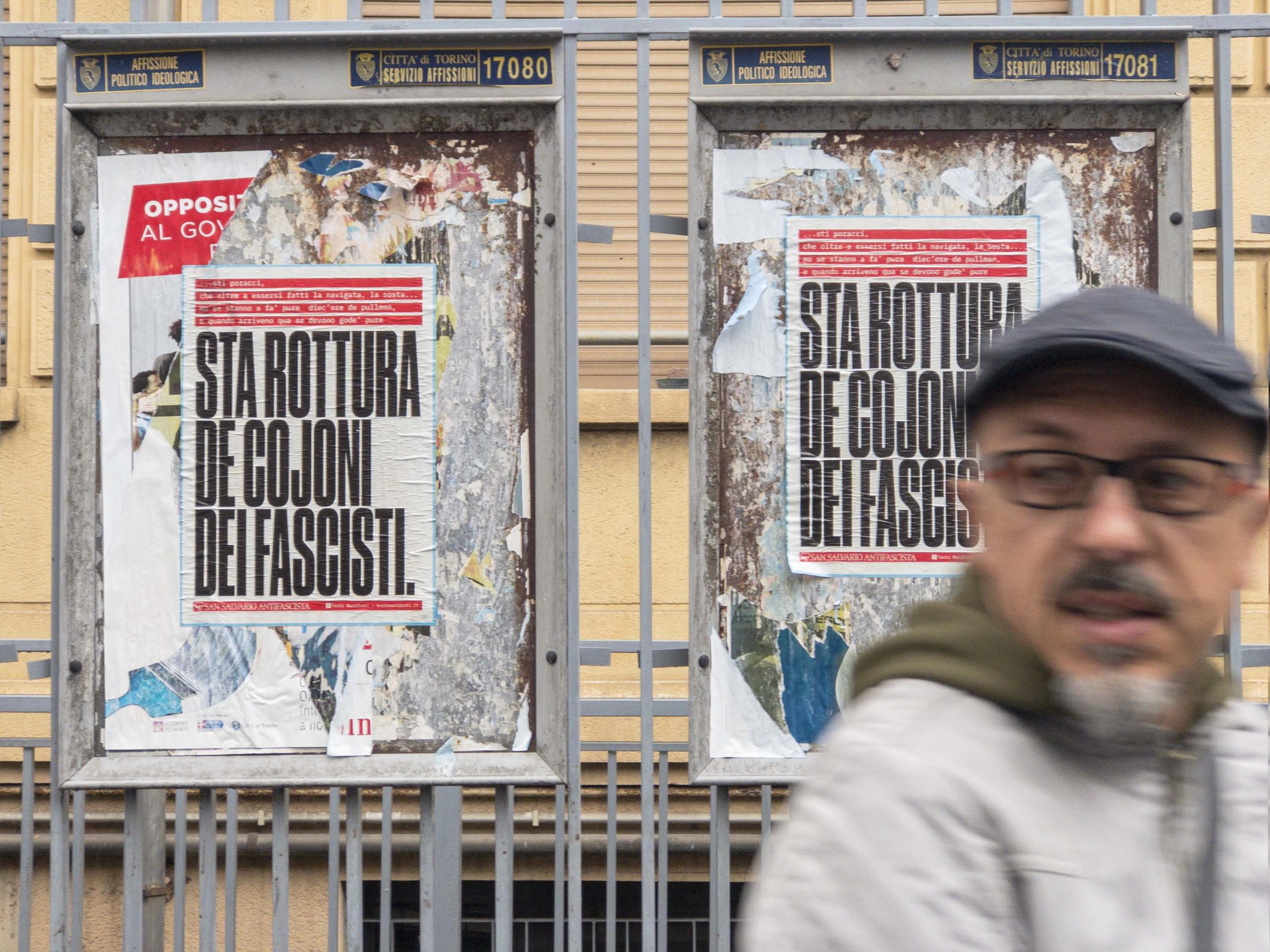 With further apologies to Marx, it is not true that all events and personages appear twice. To the extent they do, the outcome of their return is just as likely to be a tragedy as it is to be a farce.

In The New Faces of Fascism (Verso, 2019) Italian historian Enzo Traverso has taken up the question of the putative revival of fascism in Europe and the United States, and its likely political consequences.

As is the case with all varieties of politics, the future remains unwritten, and Traverso acknowledges it to be so.

In 150 densely argued pages, the historian seeks to ascertain the current status of fascism via its metamorphoses into neo-fascism and what he calls post-fascism, and to provide some educated guesses about the ways these changes might transform the North Atlantic political landscape.

The book is composed of two parts. In the first, Traverso looks at the rise of far-right groups and figures in Europe and the United States.

In the US, the rise of Donald Trump has roiled politics and many of the old certainties seem to be in a process of disintegration.

In continental Europe, the rise of the extreme right, the Front National (now Rassemblement National) in France, Alternative für Deutschland and PEGIDA in Germany, and Jobbik in Hungary (to name a few) pose an existential threat to the post-WWII democratic order.

In the United Kingdom, the success of the Brexit vote, coupled with the rise of UKIP and the English Defence League, has further raised the profile of the threat from the right, ushering forth a new kind of anti-democratic politics, far harsher than neoliberalism.

While this has led to a new prominence for parties hoping to rebuild the nationalist and racist movements of the interwar period, the more significant development is the rise of postfascist groups.

Post-fascism differs from fascism in that it lacks communism as its bête noire. In its stead, Islamic terrorism has been taken up as the necessary other, the threat against which the negative integration of the polity can be effected. As Traverso notes:

“Post-fascism no longer has the ‘strong’ values of its 1930s ancestors, but it purports to fill the vacuum that has been left by a politics reduced to the impolitical. Its recipes are politically reactionary and socially regressive: they involve the restoration of national sovereignty, the adoption of forms of economic protectionism, and the defence of endangered ‘national identities’. As politics has fallen into discredit, the post-fascists uphold a plebiscitary model of democracy that destroys any process of collective deliberation in favour of a relationship that merges people and leader, the nation and its chief.”

Post-fascism is also less committed, or perhaps differently committed, to the sorts of petit bourgeois social conservatism that characterised fascism in its “classical” era.

“The main feature of today’s post-fascism,” Traverso claims, “is precisely the contradictory coexistence of the inheritance of classical fascism with new elements that do not belong to its tradition”.

These include a more general acceptance of homosexuality and a less restrictive view of the role of women in society. Post-fascism defines itself less in terms of some sort of bedrock social beliefs held in common and more in terms of a fear of the threats posed by globalisation.

The AfD’s lesbian co-leader Alice Wiedel, a former Goldman-Sachs banker, is a perfect example. Raising a child with her South Asian partner, Wiedel nonetheless inveighs against Islamic ‘knife migrants’ and the reduction of German sovereignty by global capital.

European movements of the right have been strengthened by what is perceived to be the fundamentally authoritarian structures of the European Union. Governance in the eurozone is a matter of expert-led neoliberalism, a minimised democracy ruled by experts and technicians.

Lacking the engagement of participatory democracy, and with the political establishment effectively firewalled, populist rhetoric has increasingly found traction in Europe, especially when alloyed with the new and threatening post-Cold War other: the Muslim refugee.

The Islamophobia of the new European right comes with a renewed Judeophobia, which Traverso distinguishes from the older traditions of anti-Semitism.

This racism is an effect of a naïve anti-Zionism, in which criticism of Israel and its role in regional conflict turns into attacks on Jews per se.

It is a “social anti-Semitism” still abhorrent and discriminatory, but not the anti-Semitism of the late nineteenth century.

Fascism through the eyes of academia

In the second half of the book, Traverso turns to the study of fascism. The analysis of fascism, like that of most other politics, is generally undertaken in one of two ways.

Social scientists, most prominently British academic Roger Griffin, try to understand fascism by looking for some essential or defining characteristic, thereby allowing it to be distinguished from politics such as populism that abut and overlap with it in places.

Griffin’s central concept is what he calls “palingenetic ultranationalism,” the idea that the social and political order is not to be reformed but reborn.

For Traverso, a more historical approach is in order, one which looks at fascism in its original context and then traces the ways that it has mutated since WWII.

Central to Traverso’s account is in the key role played by communism (or rather anti-communism) in fascist movements. The Bolshevik Revolution of 1917 had altered European politics in ways that would not become fully clear until after the end of the WWI.

This is most clear in the degree to which the beginnings of Italian fascism were shaped by the Biennio Rosso, a period of left-wing militancy in 1919 and 1920, which brought Italy to the edge of revolution, only to inspire the rise of Mussolini to power in 1922.

In Germany, the end of the war saw a similar upsurge in militancy on the left, with equally negative consequences. The growth of groups on the far right synergised with threats from the left, both perceived and actual.

It is worth noting that Adolf Hitler got his start working in anti-communist training programs run by the German army in the months immediately following the armistice, in November 1918.

The Spartakusaufstand in Berlin in January 1919 and the formation of the Bayerische Räterepublik in April of that year gave tangible form to fears on the German right that a communist takeover might be imminent.

Numerous individuals who would later fill out the ranks of the Sturmabteilungen cut their teeth in anti-communist struggle fighting with Bischoff’s Eiserner Brigade and other Freikorps formations against the Red Army in the Baltic states in 1918 and 1919.

In place of the anti-communist fascism of the 1920s and 1930s, the post-Cold War era has seen the rise of discourses about Islamic fascism (or Islamo-fascism, as Christopher Hitchens was fond of calling it after 9/11).

This, Traverso notes, represents a distortion of the concept since, as he and others have argued, fascism took on the role of ersatz religion.

What Islamic fascism actually describes is a variety of religious fundamentalism. But the invocation of the term highlights its residual critical force, as well as the semantic irony involved in its use as a term of abuse by groups and figures more proximate to actual fascism.

Ultimately, Traverso returns to post-fascism as a means of understanding the new order on the European right. Post-fascism is a historical continuation of fascist traditions, mapped onto the new and rapidly changing political parties of Europe and the United States.

Conceptually, post-fascism is superior, in Traverso’s perspective, to populism because it makes more explicit the connections between 20th-century authoritarianism, and the overly abstract idea of populism promoted by The Guardian and its in-house expert, Dutch sociologist Cas Mudde, who describes it as a “thin-centred ideology”.

The decline of conflict between fascism and communism and the collapse of the communist left created a political vacuum. This has in part been filled by parties, mostly (but not exclusively) on the political right, that evince post-fascist tendencies.

In Italy, for instance, the Matteo Salvini-led Lega Nord has to a great extent become the party of blue-collar workers, and a similar development can be seen in France with respect to the voter base behind Marine Le Pen and her parties.

In both cases, they picked up voters who used to vote for socialist and communist parties, and, in Salvini’s case, more modern anti-system parties like coalition partners Movimento Cinque Stelle.

While Greece’s Syriza and Spain’s Podemos have acted as a serious counterweight to the far right, both parties are heavily comprised by middle-class leftists and intellectuals.

The question is whether the post-communist exhaustion of the workers with the left can be overcome.

Enzo Traverso’s The New Faces of Fascism makes it clear what to expect from Europe’s populist parties, and why calling them populist disguises how dangerous they really are.

The conflict between Russia and Ukraine continues with no end in sight. END_OF_DOCUMENT_TOKEN_TO_BE_REPLACED

Some websites make the news, others make headlines. END_OF_DOCUMENT_TOKEN_TO_BE_REPLACED