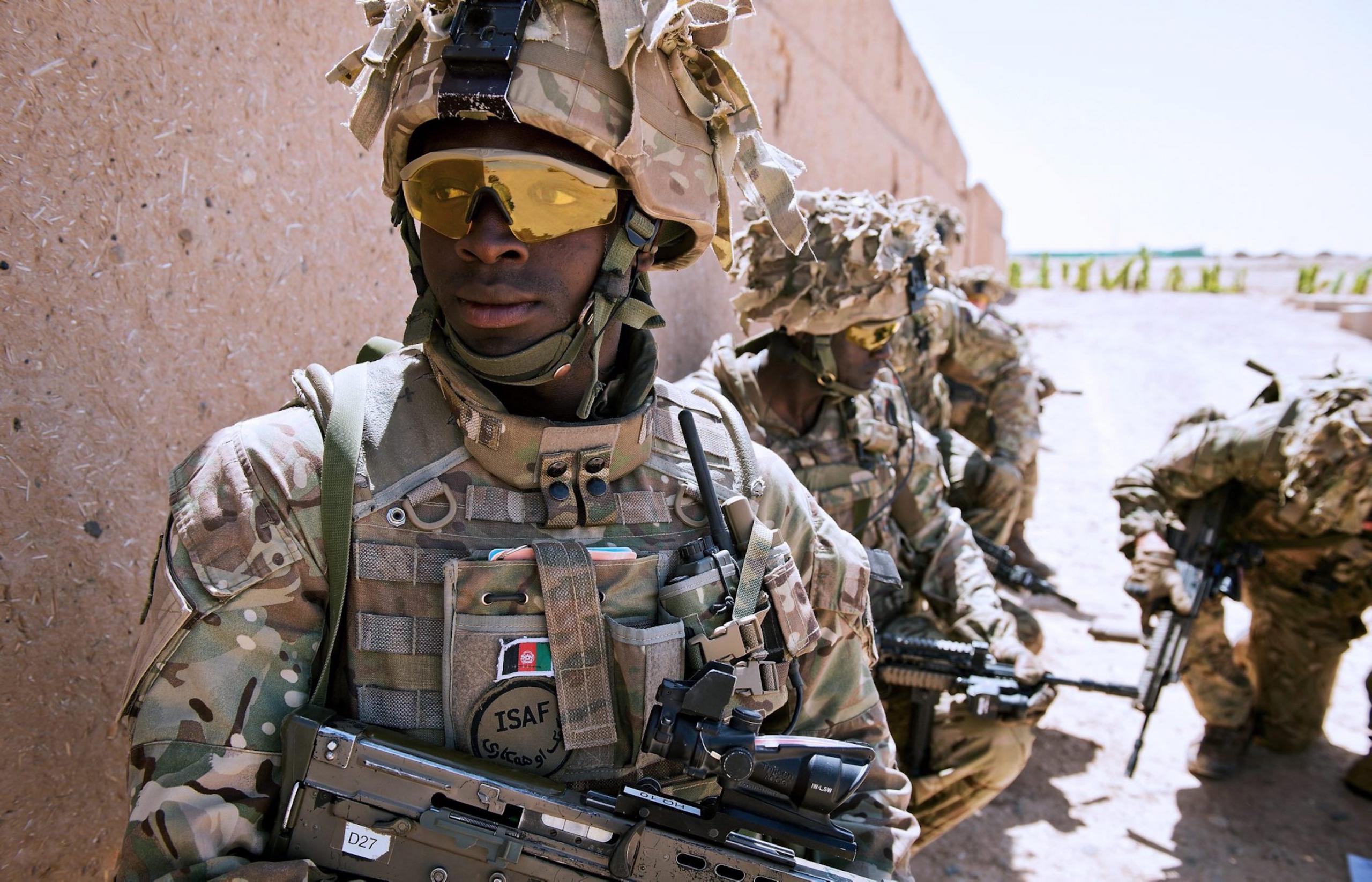 Focused on the Eastern Mediterranean, the conversation highlights the extent to which NATO forces remain caught up in a number of regional conflicts, the biggest of which continues to be in Syria. No longer a civil war, but an international crisis that includes Russia and the United States, Ahronheim contends that the situation in Eastern Europe is, in fact, more serious.

Battleground: How large is the French presence in Syria? As the former colonial power in the country, it’s really interesting to watch France return.

Anna Ahronheim (AA): The French have a reported 1000 troops on the ground in Syria. The Brits are still involved in operations in the country and have a small contingent of special operation forces in northeastern Syria.

Those British troops were in the mid-Euphrates area with American forces during the battle to re-take Baghouz from Islamic State.

It’s interesting to see both colonial powers return to the area. But what’s most interesting are the Russian moves to strengthen their influence across Europe and the Middle East.

Battleground: To what extent have European troops participated in the Syrian Civil War? The general impression is that the NATO deployments, with the exception of the Americans, have mostly been through the provision of air support for rebel forces from Cyprus, and from naval assets in the Mediterranean.

AA: European troops haven’t taken part in the Syrian Civil War but they have played a major role in the battle against IS, in both Syria and in Iraq.

Troops from various countries have taken part in dozens of operations, both airstrikes (the UK, the Netherlands, Belgium, Denmark) and military operations and weapons training (Germany, which trained the Iraqis and Kurds).

There are several European ships deployed to the Mediterranean, though many are sailing as part of NATO operations.

Battleground: European forces are also present in the UN detachments in the Golan Heights, and Lebanon, as well as in Jordan. How does that affect the strategic balance locally? Does it match the Russian presence in Syria? I’ve often heard the Russians complain that they’re still playing catch-up with NATO in the region.

AA: The peacekeeping forces deployed to the Golan as part of the UN Disengagement Observer Force (UNDOF) numbers some 1,000 strong while there are about 350 personnel at the United Nations Truce Supervision Organization (UNTSO) in Jerusalem.

There are over 11,000 peacekeepers in the UN Interim Force in Lebanon’s (UNIFIL). France continues to contribute to UNIFIL in Lebanon with surface-to-air capabilities, to report violations along the Blue Line between Israel and Lebanon. So that’s about 12,450 personnel deployed to the Middle East under UN detachments.

According to a Russian defence ministry video released last year, Moscow reportedly sent 63,012 servicemen to Syria. But the number of Russians actually in Syria is likely much higher with hundreds if not thousands in the country as part of private military companies like the Wagner Group. The Russians are not playing catch-up. No way.

Battleground: How does all this compare with the heyday of coalition forces in Iraq, during the American-led occupation? At one point, it seemed like most NATO member states had sent troops to the country, as well as to Afghanistan. The Germans, Italians and British have not drawn down their forces fully, while the American presence is sharply reduced.

AA: Iraq has changed dramatically. The Iranian influence on the country is growing, and it should be watched carefully by coalition forces.

As I mentioned in my previous comment, there was a large European presence in Iraq during the fight against the Islamic State group and there are 95 European Union troops in Iraq as part of the European Union Advisory Mission in Iraq (EUAM Iraq) which was launched in 2017 following a request from the Iraqi government. The mission has already been extended by several years and the personnel doubled from 50.

Battleground: Given how much US President Donald Trump wants NATO and Arab governments to shoulder more of the military burden in the region, how much do you think this will encourage closer relations between NATO members and allied states such as Israel, Jordan and Egypt?

AA: Jordan, Egypt and Israel have been watching Trump and NATO for a while. Israel is part of an Eastern-Mediterranean “alliance” of sorts with Cyprus and Greece and has quietly given Germany the green light to let Egypt purchase advanced military gear including submarines. Egypt is almost completely refurbishing its military and just signed a deal with Russia to purchased new SU-35 fighter jets.

The US officials didn’t comment on such arms deals before, So why they do it now with the Su-35?! pic.twitter.com/8HSqpH7SjM

Jordan also has a relatively strong military and played a part in the fight against the Islamic State group in Syria. The Jordanian military is one of the most formidable armies in the region and its King Abdullah II Special Operations Training Center is used by militaries across the world.

The three countries mentioned, while not as large or rich as the United States, are able to shoulder a military burden, but will be stubborn to do so relative to their need.

Battleground: Whenever the press speaks about European forces in the Mideast, Turkey is often left out of the discussion, even though it is a European country, though not in the EU and a member of NATO.

Turkey also occupies a part of northwestern Syria over twice as large as the Israeli-occupied Golan Heights. Is Turkey there to stay? Do NATO forces use it for any purposes, such as surveillance of Russian forces?

AA: Turkey wants to stay. It sees itself as a force to be reckoned with in the region. It also has interests in northwestern Syria: the Kurds and keeping them at bay from Turkey.

Turkey joined NATO in 1951 and worked with Washington to counter the Soviet Union during the Cold War. While Turkey is still a key player in the Middle East, it is at a crossroads with NATO as Ankara is still planning to procure Russia’s advanced S-400 missile defence system. Erdoğan’s growing authoritarianism is a problem for the alliance as well.

Battleground: Speaking of non-EU European forces, what are the long-term prospects for Russia’s military presence in the region? Will Moscow station forces in other regional states, such as Iraq and Egypt?

AA: Russia has already reasserted itself as the main superpower in the Middle East, especially with the American withdrawal from the region.

It is not only selling S-400 systems to Turkey but also T-90 battle tanks to Iraq. Russia is here to stay.

Battleground: European air forces have been coming to train in Israel with increasing frequency over the last decade. What kind of exercises do they take part in? Why train in Israel when they could use American and British facilities in Cyprus, Incirlik or the Persian Gulf?

AA: Europe has sent its air forces to Israel to train because of the high-level of Israeli pilots and their battlefield experience. Israel, which also has advanced training facilities, has been increasingly reaching out to foreign powers to carry out aerial drills, in turn.

In 2017 crews from the United States, Greece, Poland, France, Germany, India and Italy took part in Blue Flag in southern Israel where they honed their skills in planning, targeting and coordinated command and control.

Other countries, which are not allowed to be named, also took part in the drill. It was the first time that Indian pilots took part. Israeli pilots also train often in Cyprus.

Battleground: Cypriot, Greek and Israeli forces have been growing increasingly close in recent years. Many analysts point to the natural gas fields around Cyprus as being an incentive for the cooperation.

What would happen if Turkey decided to claim them and went to war with the Greek south, which is protected by Athens? Would Israel find itself compelled to help defend an EU member state from a competing NATO country?

AA: The close ties between Israel, Cyprus and neighbouring Greece are based on a number of shared strategic interests. While all have shared economic interests, such as the ambitious project to build an undersea gas pipeline from Israel to Cyprus to Crete to mainland Greece, the three countries also hope to keep the Russian-Iranian-Hezbollah axis from growing.

I’ve written in the past that all three have recognised the need for new alliances and have declared their willingness to widen this Mediterranean alliance to perhaps include other regional players such as other moderate Sunni-Arab states such as Egypt and Gulf countries, despite strains due to the stalemate in peace negotiations between Israel and the Palestinians.

I do believe that if Turkey were to go to war with Greece that Israel would consider sending aid to Athens, though I am not sure it would fully interfere in a war between the two by sending troops.

Battleground: Do Russia and NATO still use the Middle East as a place for proxy conflicts, in the manner that the Arab-Israeli conflict once facilitated?

AA: While the Middle East is still a playground for the proxy conflicts between Russia and NATO, Eastern Europe has been the main battleground, especially Ukraine. The international community needs to put more focus on Eastern Europe and the threat that emanates from there.

Photograph courtesy of US Central Command. Published under a Creative Commons license.

The conflict between Russia and Ukraine continues with no end in sight. END_OF_DOCUMENT_TOKEN_TO_BE_REPLACED

Some websites make the news, others make headlines. END_OF_DOCUMENT_TOKEN_TO_BE_REPLACED