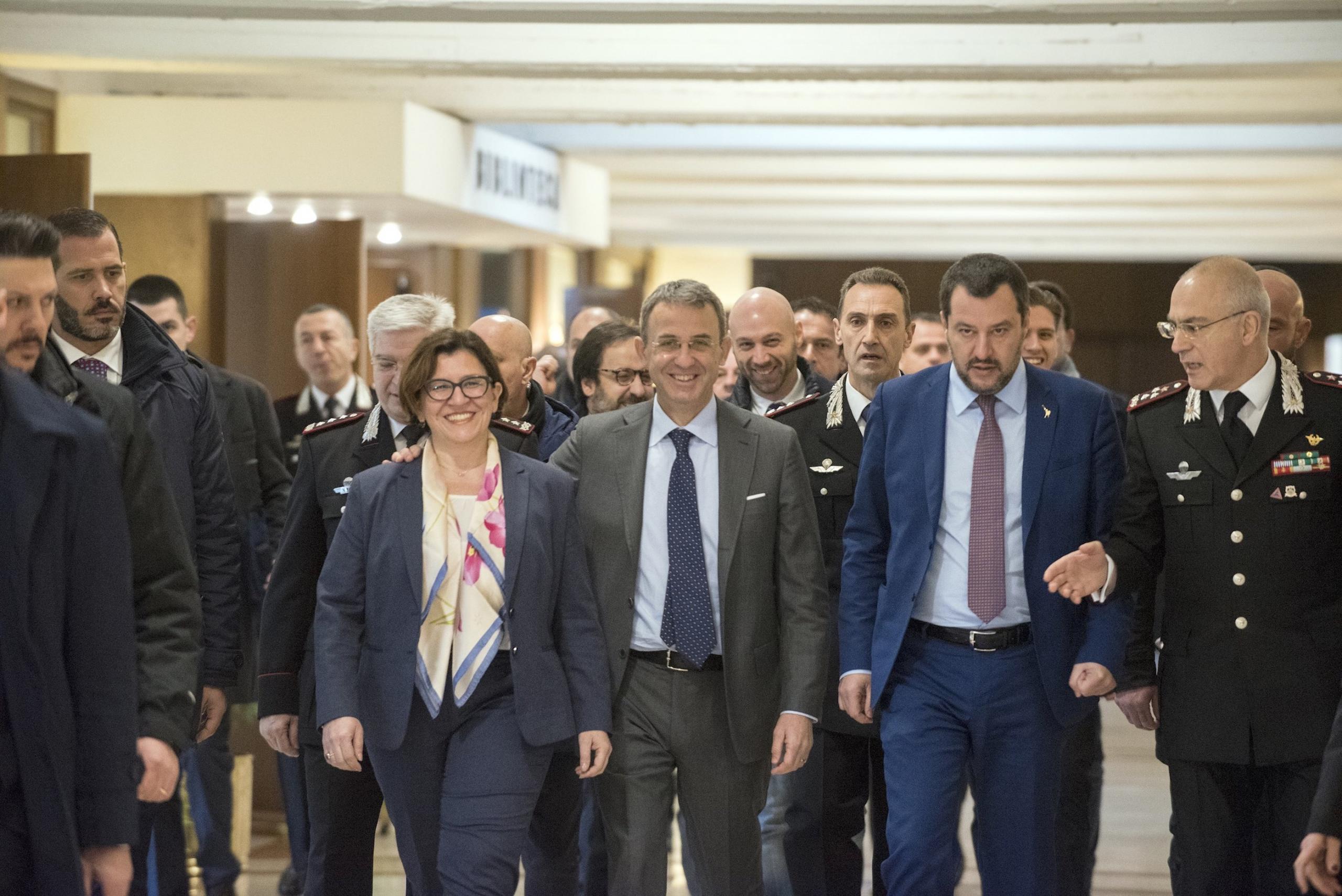 Though the Italian deputy premier’s party polled best amongst its peers, the Lega still did not do as well as the Partito Democratico did in 2014.

Review the data a little more carefully, and the Italian parties to Salvini’s left — coalition partner Movimento Cinque Stelle and the aforementioned PD — together captured five more votes in the legislature. The fact that MEPs this week voted in PD MEP David Sassoli as Parliament President is a reflection of this distribution of power.

The Battleground spoke to Sassoli’s colleague, two-term PD MEP Brando Benifei, about Italy’s confusing politics and where he thinks things will lead. Hailing from the industrial port city of La Spezia, Benifei’s carefully considered opinions defuse much of the hysteria surrounding Italian politics in the Salvini era.

Battleground: Matteo Salvini has been sounding more and more American lately in his conservatism, promoting lower taxes and Evangelical-style family values politics. Is this a consequence of his relationship with Steve Bannon?

Brando Benifei (BB): Bannon is working more closely with Georgia Meloni (leader of the far-right Fratelli Di’Italia party) than Salvini. But Salvini obviously says they are all the same.

Salvini is more institutional. He’s more closely allied with Trump’s circles. He wants to align Italian policies with them.

The problem is that the 5 Star Movement has different relationships: With United Russia (Vladimir Putin’s governing party) and there is a Chinese connection.

That’s where they conflict: 5 Star-China and Salvini-Trump. (But) no one, Europe.

This is how it is. These are the issues which require analysis. The peculiarity of Italy is that these forces are aligned with external parties who don’t want the EU to strengthen.

This is the most problematic thing because these geopolitical alignments are very much against Europe strengthening.

Battleground: What’s China’s interest in doing this through Italy?

BB: Buying things, having an important country that bends to their strategic interest. They’re working a lot on that. There is an Under-Secretary of State for the Ministry of Economic Development, Michele Geraci, who has employees who only speak Chinese.

We have a memorandum (with China) that includes a lot of things on telecommunications. The president (Sergio Mattarella) struck that down from the text, but he couldn’t stop it, because otherwise Xi (Jinping) would have stopped his visit.

For Italy, that would have been a catastrophe. Mattarella had to work on the text because there was a huge opening to Huawei, which was not understandable or acceptable to the EU and the US.

BB: That’s an interesting theme to develop. Maybe he sees it like that.

Salvini comes from an extreme left background. He was in the communist faction of the young Lega activists, the Padania Communists. He was mocked for that.

Salvini has this issue with elites, with political correctness, with Islam, more than with the traditional rightwing friendship with the US, which was to fight the communists.

He’s aligned with the 5 Stars, who are on some proposals extremely far left, in a very confused and damaging way for the left.

Salvini is aligned with people who should be the enemy in this schematic.

Roberto Fico, who is president of the Chamber of Deputies, comes from the squats of Naples and occupied buildings. This is the kind of thing he did when he was young.

There is a part of the 5 Stars who are suffering from this government agreement (with the Lega), also in terms of support, like this. They lost votes, for sure.

So, in the end, I would not say it’s exactly the same for Salvini with Trump, but it’s an interesting topic to think about and study.

BB: On that, yes. Totally. There are things that must be noted. He sometimes writes phrases that are quotations of Julius Evola and Mussolini. Sometimes he confuses them, but you can (identify) them, in Tweets.

And he also wore a jacket made by a company linked to the extreme right during a soccer match, and everyone noticed it. Salvini sends these kinds of subtle messages, that I’m a friend of yours and I’m a bit of you, also.

Battleground: What’s the long-term strategy to deal with Salvini? Is there one on the part of the centre-left that you represent?

BB: Italy has a history of government honeymoons. Monti, for example, is hated for heading a technocratic government to save the economy after Berlusconi. But at the time he had huge support. Then, you have Renzi, then you have Salvini.

This is the tendency. Especially for this kind of rude leadership, that both Renzi and Salvini have, there is a fascination with the honeymoon period that always happens in Italy.

The governments have huge support for some period of time, allowing forces perceived to be strong to grow. Then, things change.

My opinion is that at some point the Salvini wave changes too.

We even saw this changing with Berlusconi, who was much more solid, because he had his media behind him (Ed: Silvio Berlusconi is Italy’s largest broadcast and publishing stakeholder). We have people studying that.

BB: Yes, Salvini’s social media presence is his strength. He has this very powerful machine called ‘The Beast’. His interactions are going down. He’s losing followers because people are getting a bit tired of him eating things and then showing us. All around, it’s not working.

I think it will take some time for his audience to go down, because the Democratic Party, at its peak of support, was supported by people who didn’t share anything with me or the party. I’m convinced that people, particularly in Italy, desire to be part of a victory. This is a basic thing.

So, when Renzi was very strong, everyone wanted to say they were with Renzi because they wanted to be part of a victory. Even if they didn’t share any of our party’s positions. That was clear because I know people who are right-wingers who were like, okay.

Renzi was a centrist, and they were right-wingers, but they supported us because they wanted to feel a part of the victorious part of Italy at that moment. Many people are switching parties based on impressions and sympathies but also out of the desire to be part of victories.

I remember very well when we approved civil unions in Italy for gay and lesbian couples. So many people were at least indifferent on the topic, or slightly homophobic in some cases. When the approval was narrated as a big victory, many people were happy to say that they were happy about it and agreed with the outcome.

BB: This kind of subtle psychology is very important. Salvini is also experiencing this now: The fact that people want to be with the one who looks victorious. When you have these very strong leaders in Italy, you get a kind of trust that is irrational.

Battleground: People are starved of not being a part of something bigger and more successful. The politics appear secondary, at a certain level.

BB: I think it’s very important to take this into consideration when we think about the phenomenon of Salvini. Because it’s a reoccurring thing. When you see images of Salvini out on the streets, with people who want to make a selfie with him, it was the same with Renzi and Berlusconi. And, I’ve been told, it was the same in the 1980s with Craxi.

When we have this disaster, in October, with the (2020/2021) economic manoeuvre, people will start to criticise him inside his party. The 5 Stars will also become more turbulent because it will not look like the winning party.

It’s not so nice to say these things but it’s the truth, I think. It’s reality. If you want to change things, you need to know ‘the battleground’ (laughter).

Brexit will turn three on the last day of January, over six years since the 2016 referendum kickstarted Britain’s race to the bottom. END_OF_DOCUMENT_TOKEN_TO_BE_REPLACED

Be careful what you wish for. It may be a cliché, but it’s one the Greens are learning all over again. END_OF_DOCUMENT_TOKEN_TO_BE_REPLACED

Before his arrest, Andrew Tate was just another influencer with bad politics. END_OF_DOCUMENT_TOKEN_TO_BE_REPLACED