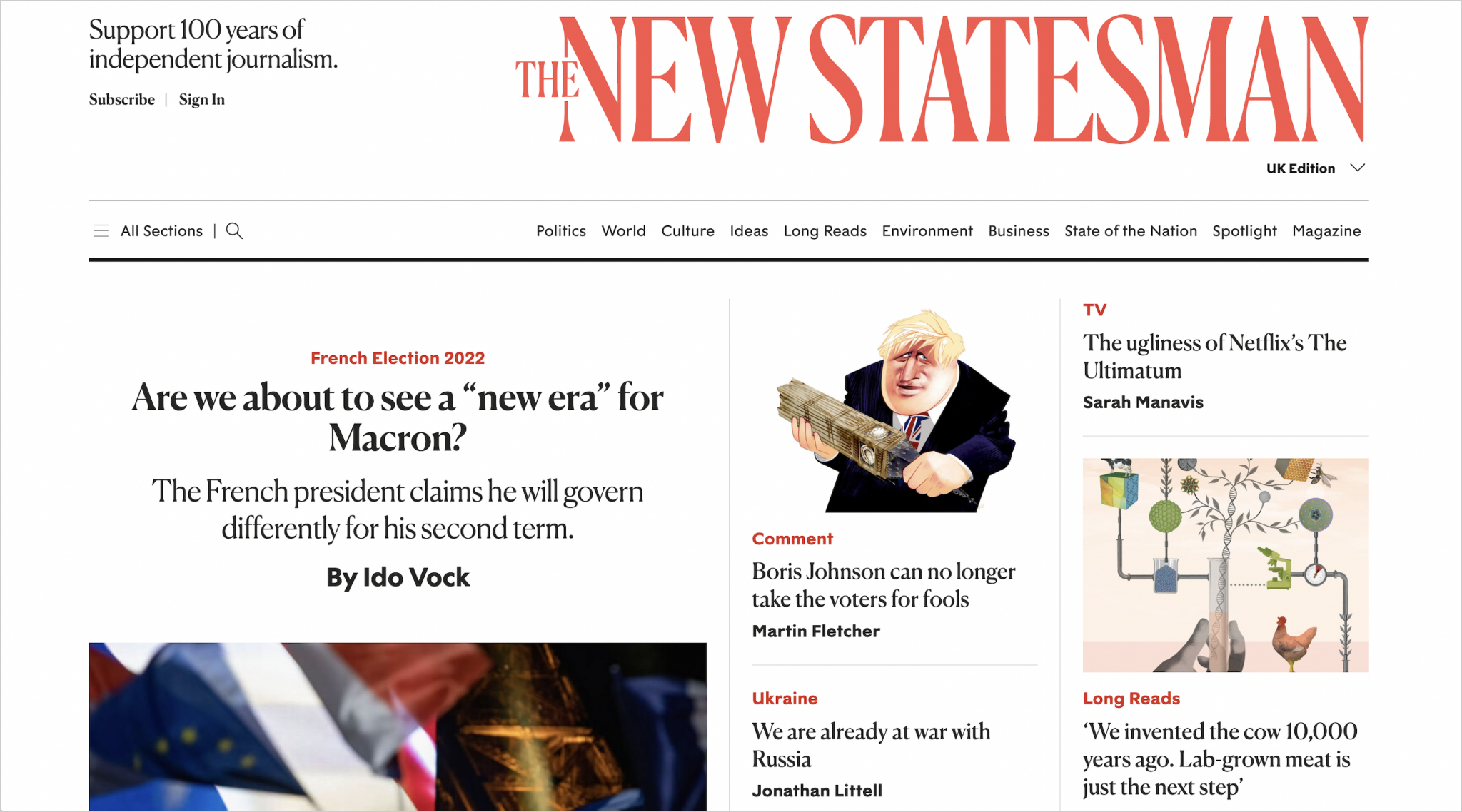 Despite the changing times, The New Statesman is still listed at an unremarkable office near Fleet Street. This used to be the home of British journalism, but it’s now another commercial district where law firms and pharmaceutical companies abound.

Most newspapers and magazines have abandoned this stretch of tarmac for cheaper locations. The NS, along with The Metro, is one of the very few publications still here. The old buildings of the Telegraph and the Express remain as monuments to a bygone era.

This area was completely dead during lockdown. It’s only just springing back to life, and yet the old Fleet Street is long gone. The street is no longer the home of UK media, except in metaphor. Fleet Street may just be a figment of social networking.

The New Statesman, by contrast, is very much alive.

The magazine has turned around its fortunes, ratcheted up its online subscription base and expanded its reach on the back of business-to-business publishing.

The New Statesman was once so precarious that it was affectionately nicknamed The Staggers. Those days appear to be over, but what has really changed about the old Fabian magazine?

New Statesman : According to its present self-description, it has a liberal and progressive political position. Jason Cowley, the magazine’s editor, has described the New Statesman as a publication “of the left, for the left” https://t.co/nigWFaTYcd

Once the journal of British social democracy, The New Statesman has transformed itself into a liberal periodical closer to American titles like The Atlantic and The Nation. However, the liberal pivot makes more sense if you look closer.

There has always been a historic division in the NS. Social reformers Sidney and Beatrice Webb set up the magazine with the backing of socialist writer George Bernard Shaw, but its first editor, Clifford Sharp, was close to the Asquith wing of the Liberal Party.

The Webbs hoped that The New Statesman would be the left’s version of The Spectator. The magazine would go on a long journey, but never quite arrive at its ambition to match The Spectator in influence.

Editor Jason Cowley, who took over in 2008, has changed the magazine’s strategy.  He has overseen an expansion into business-to-business publishing that raises much more revenue than the traditional remit of the NS.

This required a new politics as well.

“Our USP is both our politics, our liberal sensibility and the quality of our writing and analysis. We’re also sceptical and unpredictable in our politics,” said Cowley.

The New Statesman publishes conservative philosopher John Gray and right-wingers like Simon Heffer, while voices of the radical left have become more marginal.

“Today we have a bigger range of voices than we have ever had. We have writers from left and right. But always we have this sceptical liberal sensibility and I think that’s been our strength in recent years,” said Cowley.

You know that the New Statesman itself is part of that obsessive anti trans movement right. They are one of the prime purveyors of anti trans rhetoric, employing multiple liberal media terfs (not least their editor)

Cowley introduced a paywall to the website and forced many people to subscribe. The online readership is now estimated in the millions, while print circulation has reached 36,000 – the highest in decades.

The B2B content is targeted at the wealth management industry.

This content tends to do very well. There is no shortage of money in that sector and plenty of financial professionals want to advertise their services and are willing to pay to do so.

This may seem like a strange turn for a Fabian magazine, but the Fabian Society is no longer socialist in a serious sense and neither is social democracy the name of the game for Labour politicians.

The age of Keir Starmer is the age of vacuity. The New Statesman has become a platform for Starmer’s speechwriters and his dwindling number of left fanboys. This is more coherent with NS history than some leftists want to believe.

Given Labour rightly criticise the Tories for marking their own homework, this looks utterly pathetic.

It didn’t have to be this way though. The NS has managed to rebuild its fortunes on the back of liberal politics and advertorial work in side projects, but there was always a vast audience open to it if it had taken a different position.

The New Statesman had an opportunity in 2015 to use its historic role as the Labour Party’s cultural wing to give a platform to Momentum and support the Corbyn project.

Instead, the magazine fell in line with the rest of the UK media in attacking Jeremy Corbyn.

The Labour membership surged to almost 600,000. The Labour Party became the biggest centre-left party in Western Europe. The party would see its vote-share leap by almost 10% in 2017. Millions of people, for a brief time, supported Corbyn’s agenda.

Much like The Guardian, the NS staked its credibility on the politics of establishment respectability. The New Statesman wanted to be taken seriously by the Westminster political class, and the political class hated everything about Corbyn – and hated its supporters even more.

Strangely, Jason Cowley had written passionately in favour of Ed Miliband. The NS had backed Labour to the hilt in the 2015 general election. Once Corbyn took over, Cowley decided that his failure was to not run on “patriotic social democracy”.

What was Tony Blair, a plumber from Wakefield?

When it came to Brexit, The New Statesman was right to oppose Leaver nationalism but many of its writers ended up blaming Corbyn more than Nigel Farage for this disaster. And, once the Labour Party fell into a bitter civil war, the NS was aligned with the establishment.

Taking a ‘neutral’ position in 2019, the magazine shocked many people who expected the magazine to back Labour no matter what. After all, The New Statesman is supposed to be the intellectual and cultural outlet of the Labour left.

Instead, the NS endorsed a list of centrist candidates for Parliament including Rosie Duffield and Jess Phillips. The editorial confirmed the shift away from anything resembling socialist politics to an amorphous progressivism.

No doubt The New Statesman contributors would defend the magazine on the grounds that it still platforms good writers and the liberal turn has rejuvenated the publication. After all, the NS  has opened a US branch now. So it must be doing something right.

The magazine can boast of big beasts, but these include former BBC presenter Andrew Marr and former Tony Blair speechwriter Philip Collins. These are not the innovative minds of tomorrow.

The New Statesman plunges to the soft right while the Guardian chest-thumps about the Ukraine.

Thus we see encapsulated the corruption of the liberal media.https://t.co/pFDpmRzYqn@medialens

Tellingly, The New Statesman appears to be more backwards-looking than ever before. The website has undergone a renovation that harks back to an earlier time in publishing, yet its sleek look does not compensate for its shortcomings.

The best political commentator the NS had was Stephen Bush and he has left the magazine to take up a job at the Financial Times. Bush will continue to do great work, but not for The New Statesman.

The New Statesman is still a part of the small, embattled world of progressive UK media, but it stands with The Guardian in its commitment to ‘soft left’ and centrist liberalism.

Meanwhile, the radical left has lost another platform for its ideas.

The withdrawal of the NS from left politics leaves a space open for an influx of smaller, more innovative platforms. Yet the space could also be used to launch a rival to The New Statesman.

The magazine may regret its pivot to the centre-ground.

Screenshot courtesy of The New Statesman. All rights reserved.

Foucault once suggested that Clausewitz’s famous observation, “war is not merely a political act but a real political instrument” carried out by other means, be reversed, with politics made an extension of war. END_OF_DOCUMENT_TOKEN_TO_BE_REPLACED

Brexit will turn three on the last day of January, over six years since the 2016 referendum kickstarted Britain’s race to the bottom. END_OF_DOCUMENT_TOKEN_TO_BE_REPLACED

Be careful what you wish for. It may be a cliché, but it’s one the Greens are learning all over again. END_OF_DOCUMENT_TOKEN_TO_BE_REPLACED