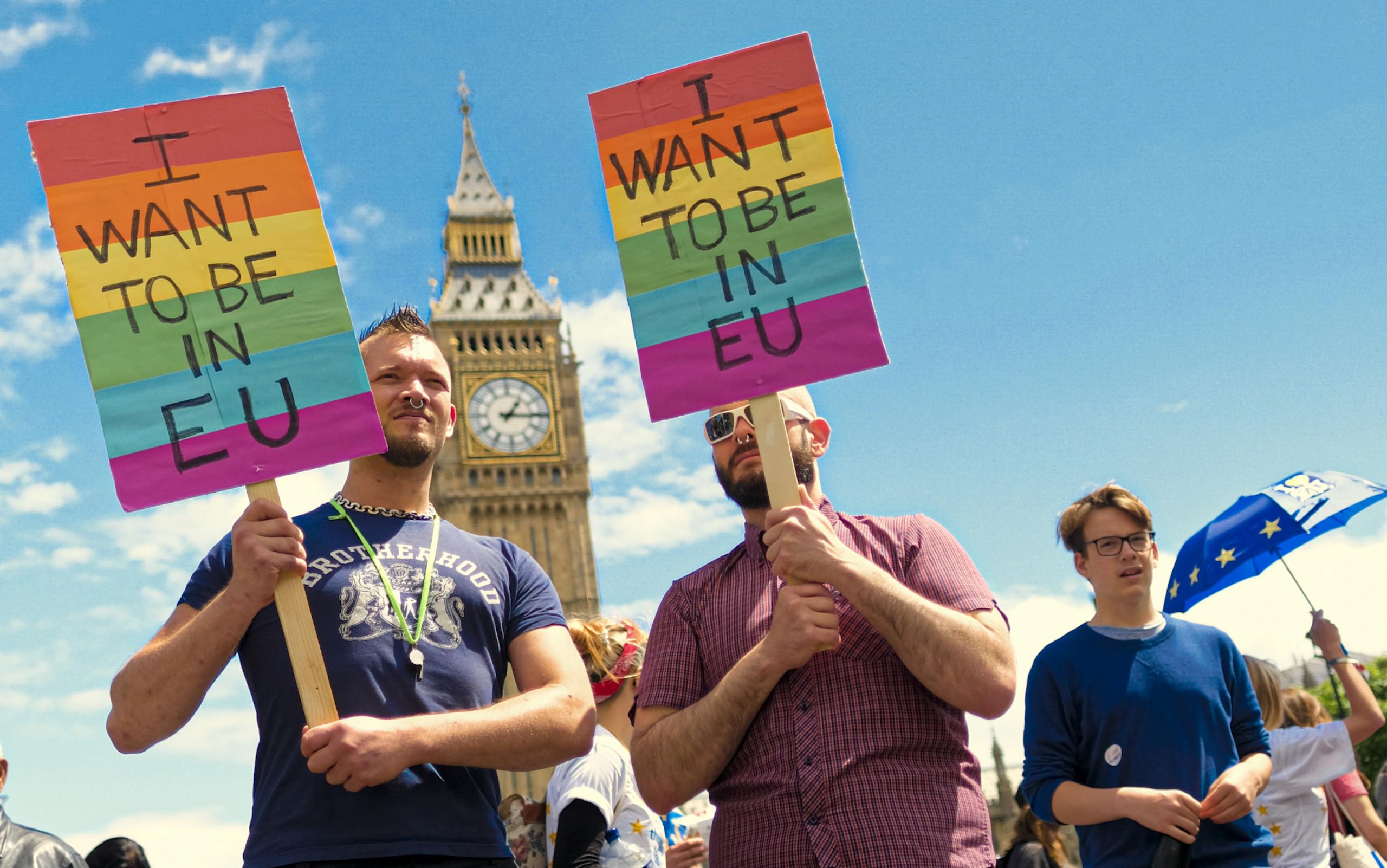 Born on Lucerne Road just weeks after the June 2016 Brexit vote, the first edition had 48 pages about the 48% who voted Remain. The paper doesn’t try to represent the national mood because the nation is broken.

Founder Matt Kelly has been clear about his vision for the newspaper. He sees The New European as “the platform for the radical centre” between The New Statesman and The Spectator. This is a return to the post-politics of the early Blair project.

The newspaper’s name harks back to The European, the first attempt at creating a national newspaper for Europe. It was one of Robert Maxwell’s last ventures. It outlived the old crook, but it floundered and eventually died in 1998.

The Maxwell-owned newspaper failed partly because there is no single European nation, whereas The New European may succeed because it is based in Brexit Britain of all places. It’s the paper of the losing side in 2016, or at least it wants to be.

Originally a pop-up paper with no plans for longevity, The New European has tried to become the flagship publication of liberal pro-EU opinion in the UK. The newspaper was meant to run for two months, and six years later it is still with us.

The New European is valued at £6 million. A small newspaper with little physical presence can do well for itself, especially if its politics are acceptable to businesses willing to pay for ads.

Archant owned the paper until it was bought in 2021 by a consortium, including Matt Kelly himself, as well as former BBC director-general Mark Thompson and former Financial Times editor Lionel Barber.

This year The New European changed its ownership structure once again. The company opened up its shares to readers and raised more than £1 million from 2,000 individual investors.

There are clearly more than enough die-hard Remainers to read it, and yet the newspaper has a print circulation of 20,000 readers. This puts it in similar ranks to local papers and small national papers, but it feels like neither.

When it launched, The New European was a broadsheet published in Berliner format but the newspaper soon changed to Compact in 2017. This style allowed it to keep its broadsheet style and apply it to a tabloid form.

The New European tries to speak for Remainers, but it really gives voice to the losing side of the official Remain campaign. Matt Kelly has positioned the newspaper to occupy the centre ground that fragmented in June 2016.

The editor-at-large is none other than Blair’s old attack dog Alastair Campbell. No doubt he helped ensure the likes of Lord Andrew Adonis and David Miliband have written for the paper.

Politicos like Campbell have failed to learn the painful lessons of the Remain campaign. Running on Project Fear, the official Remain camp tried to scare voters with warnings about GDP figures after six years of austerity, stagnant wages and flat growth.

The official Remain campaign didn’t believe there was anything seriously wrong with the UK in 2016. And why would it have? David Cameron was its leading man, alongside former PMs Tony Blair, Gordon Brown and John Major.

Meanwhile, the Leave campaign had the benefit of popular myths about the EU spread by the press for 20 years. Dominic Cummings just knew how to use the data, but a lot of voters were already open to Euroscepticism.

The paper is committed to a particular kind of Europeanism: favouring liberal institutions and good governance while being very hostile to the left, sceptical of class politics and trade unions.

The EU was a substitute for a lack of vision and commitment when it came to domestic politics. For the Blairites, Europe was a repository of progressive ideals. Politics and history may have come to an end, but the natural order was globalisation.

You can read articles about the need to separate Labour from the trade unions in its pages, as well as fawning profiles of such figures as Yvette Cooper. Though the newspaper delivers more than reheated centrism, the paper could do more with its roster.

On the one hand, The New European publishes columns by such writers as Will Self and Bonnie Greer, but, on the other hand, it serves as a megaphone for political operators like Lord Adonis and Lord Mandelson.

These were the same cast of characters who turned the People’s Vote campaign into a battering ram against the Labour leadership. Jeremy Corbyn was enemy number one for them.

At the same time, the People’s Vote campaign turned out to be wracked by sectarian divisions and power plays from all sides. Even the extreme centrists are susceptible to the narcissism of small distinctions.

One of the key figures Roland Rudd, the brother of former Conservative politician Amber Rudd, waged a coup against his rivals in 2019. Lord Peter Mandelson, one of the architects of New Labour, was on the other side.

This kind of splitting and infighting is oddly reminiscent of the radical left. Anyone who was a Trotskyist for a few months can recall the nonsense squabbles (and very serious squabbles) of those strange days.

Somehow The New European has managed not to get drawn into the same downward spiral despite drawing on the same characters and constituencies. And, even as the brand is defined by a past event, the organisation is still young and ambitious.

Matt Kelly has plans to establish a German edition to give the newspaper a presence in continental Europe. If Bob Maxwell’s attempts are anything to go by, The New European doesn’t have much of a future in the EU since its target audience is British.

For an English-language, pro-EU newspaper to succeed in a European market, it has to tap into Europe-positive national politics to succeed. Few countries are safer for such a project than Germany, in which the majority of political parties and news media favour the Union.

The trick will be to incorporate national politics in the German edition in such a way that it reflects this consensus, and yet offers something different, which stands out from what the mainstream German press already offers. That will be the difficult part for The New European.

The dominant EU news media in Europe, the Springer Verlag-owned politico.eu, has yet to launch a dedicated German-language edition on its home turf. The challenge will be holding the better-financed Politico off, should it decide that The New European is a problem.

By contrast, the newspaper has a clear offer in Brexit Britain, which sets it apart from most UK media. What it has going for it is that the paper takes a side in yesterday’s war and tomorrow’s battle. It isn’t mealy-mouthed about this and nor should it be.

Brexit is the name of a division. Much like the defeated side in a civil war, many people who were swept up in this great divide will never be the same again. Leavers and Remainers alike will carry the memories with them to their deathbeds.

This split will continue to be expressed in other forms in different struggles in the future. But this dividing line was always there. We just forgot about it because of our tendency to bury our history.

It’s no coincidence that the geography of Brexit is very similar to the divisions of the English Civil War. Leave voters tend to be concentrated in the same places as the supporters of King Charles I, while Remain voters tend to inhabit the same areas as the people who supported Parliament.

There are important exceptions to this pattern. For example, Kent was a hotbed of radical politics during the civil wars and today it is a Leave majority county with the exception of Canterbury.

Yesterday’s wars are still very much with us. Tomorrow’s battles will be defined by the past, even if we’ve forgotten. But there’s no chance of forgetting about 2016 any time soon. The scars have barely healed.

The Brexit vote was the end of the Third Way paradigm. Centrism was no longer the prevailing ideology. Moderation for its own sake has gone out the window since the boom years ended more than a decade ago.

Brexit will turn three on the last day of January, over six years since the 2016 referendum kickstarted Britain’s race to the bottom. END_OF_DOCUMENT_TOKEN_TO_BE_REPLACED

Be careful what you wish for. It may be a cliché, but it’s one the Greens are learning all over again. END_OF_DOCUMENT_TOKEN_TO_BE_REPLACED

Before his arrest, Andrew Tate was just another influencer with bad politics. END_OF_DOCUMENT_TOKEN_TO_BE_REPLACED